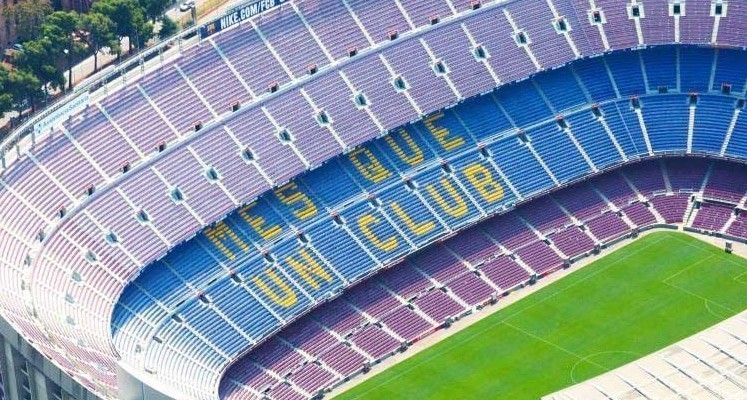 t is possible for visitors to tour the stadium in a number of ways. There is even a self-guided tour with an audio guide. There are four tiers of experience depending on the budget. The basic tour will cost €20 for a ticket and it includes tour of the entire stadium along with a visit to the Barca museum.

The Camp Nou Tour Plus is a package that includes the audio guide. It will cost €35, but you get the added advantage of a virtual experience package with VR glasses. This will provide the advantage of reliving some of the best Barcelona moments and goals.

The players experience tour is a package that costs €149. Under this package, you get to visit the changing room, press room, and dugout with the help of an official guide. There is an opportunity to take professional photos, while you would also receive an official Barcelona gift.

The matchday tour is also one of the stadium tours and it will cost €119. Unlike the other packages, this is a private tour where you will be accompanied with an official guide. There will be access to the full press zone with all the assemblies, while you get to walk on the pitch after coming out of the players’ tunnel. There will also be free access to the Barca museum.

The pricing is different for group tickets and student tickets. It is generally advisable to buy the tickets online ahead of schedule, as there is a cap on the number of visitors per session. It is extremely advisable to go down the route of pre-booking in the case of guided tours. The cheapest price of tickets are available online rather than in the ticket offices, which is often accompanied with a lengthy queue.

Barcelona has a variable ticket price policy whereby different matches are priced at different levels. The top matches tend to attract a high price range while La Liga matches against lower-ranked opponents will be significantly cheaper on the wallet. The ticket price also depends on the stand, tier, and membership status.

If you are a member of FC Barcelona, you are eligible to claim a 50% discount on the ticket prices, but this is only limited to 3000 tickets per match. Furthermore, a member can only pick up two tickets under the promotional offer and it has to be purchased on the official site.

The category A+ and A++, which includes the El Clasico and Champions League knockout matches, tend to be the most expensive. Depending on the stand, you can expect to spend anywhere from €58 – €199. The category B matches are significantly less expensive and they are priced from €20 – €90.

How to get there by car and where to park?

The Camp Nou is just 5 kms away from the city centre. It can be accessed through a number of ways. It can be quite tricky to try and deal with the notorious traffic and directions. Therefore, it is recommended to have navigation turned on. If a user is coming from the Ronda da Dalt motorway, they will be able to reach the Camp Nou by taking the exit 11 and keeping on the Avenida Diagonal (B-23) into the city. Once inside, you must keep on the right side of the tram tracks. After following into the Avenida Diagonal for 2 km, you will be able to see signs of Barcelona FC. One must not take the tunnel and they should enter into the Gran Via de Carlos III. Now, you will be able to spot the stadium just two hundred metres into the Travesía de las Cortes.

There is a substantial amount of parking space available for club members even during match days. However, one needs to take a parking permit beforehand and it can be quite difficult to find during the match days like Champions League nights. There is also a possibility to park on the Carrer Joan d’Alós, but you need to be aware of parking restrictions. Another place to park near the Camp Nou would be Hotel Reina Sofia, but you may have to pay around €10 for a spot.

By Train or Metro

If you want to travel to the Camp Nou by using any one of the trains or Metro stations, you are in for a joy considering that the subway system is extremely good. There are two stations – Collblanc and Badal – that are located within walking distance of the stadium. These two stations are appropriate if you are taking line 3, while the Maria Cristina is the best stop for those on line 5.

Even before getting to these subway stations, there may be a need to get into the city. For reaching Barcelona from other major destinations, there are high-speed trains that enter into the Barcelona Sants, which is the primary train station within the city. It is around 2.4 km away from the stadium but it has connectivity with all major cities. Thus, it can be a great link for travellers from across Europe. It would take around nine hours for the journey from London to Barcelona, while it is around three hours from Madrid.

The experience of visiting the Camp Nou can be remarkable for visiting supporters. The sheer scale of the ground can be intimidating for first-time visitors. However, there are different possibilities to become infused with the atmosphere. The visiting supporters put in the upper section of the South stand. The height of this seating section can be quite intimidating at first. The allocation for away supporters is also not very huge considering the size of the stadium itself.

It is very easy to come across a large congregation of supporters in tourist areas like Placa Catalunya and Las Ramblas. They will be able to create a remarkable atmosphere, as special areas of the city are designated for entertainment, food, and drinks. Since there are many ways to get to the stadium itself, I did not face much trouble on this front.

Once inside the stadium, the lack of a roof is a very conspicuous remainder of the European style. Normally, this would not be much of a problem for most of the year. This is especially true when you are visiting the ground in mid-March, which is a great time with brilliant weather. If there was rain, however, there is no stopping from getting drenched. Even though there are many ways to get a ticket, the best option is to use the official site. It can be difficult to get tickets for the top matches like El Clasico or Champions League games, but the regular La Liga matches are relatively easy to get tickets.

Due to the presence of many staircases at the Camp Nou, the stadium is not considered friendly for the disabled. The wheelchair access becomes difficult in most parts. However, disabled individuals on a wheelchair can still receive access to the club museum and enjoy a panoramic view of the ground from the 2nd tier.

Barcelona Fixture List (redirects you to the BBC site)

Pubs for Away Supporters

There are several pubs in Barcelona that can be a great destination to visit before a game. Due to the location of the stadium in an urban area, fans are likely to come across many Spanish bars, which are designed in typical local flavour, just near the stadium. Even though majority of the drinking and eating destinations in Barcelona are found in the historic centres like El Born, Raval, and Gothic Quarter, there are options near the Camp Nou as well. An away fan can consider:

It is possible to get the experience of a proper Irish bar even in the Barcelona city, which has the essential ingredients – traditional Irish music, shamrocks, and giant screens that play out live sports. Even though this pub is situated a little far away from the Camp Nou, it is more accessible for people who are in the city centre.

This is a great place to visit for a few drinks and food when fans are just minutes away from the ground. As a result of being very close to the Bar Guajiro, it is a great destination for away supporters, who can enjoy some drinks and beers. The food is also quite good.

Apart from the decent options available for food and drinks near the Camp Nou, it is also possible to get drinks and food within the stadium. The In Tour bar is located inside the stadium and it has plenty of refreshments like tea, coffee, and sandwiches. One can also order food and beverages beforehand and pick it up without any queues.

Camp Nou is one of the imposing stadiums on the global scene. It is also one of the largest football stadiums in the world with a capacity of just under 100,000. The official capacity stands at 99,354. This enormous seating capacity is put inside a ‘bowl style’ that is very common amongst stadiums in Europe. It is quite different from the stadiums in England which have distinct stands located near the pitch. The entire stadium is divided into four sections based on the directions – north, south, east, and west.

North Stand – This is the stand where the bowl structure of the stadium is visible at its best. There are three different tiers in the bowl along with a smaller section just above the third tier. This small section does not extend throughout the North stand. It is possible to get some of the cheapest Barcelona tickets in the two goal-ends.

East Stand – Camp Nou’s iconic words – Mes Que Un Club (More than a club) – is written on this stand. This is highlighted in yellow colours that go very well with the blue coloured chairs in this tier, which is one of the three in the stand. The middle tier is also one of the largest sections of the Camp Nou.

South Stand – The south stand is almost similar to the North stand in terms of design and appearance. Yet, it often features supporters who are very passionate about the club and who have the highest vocal contribution during a game. The upper section of the South stand is also where the away supporters are located.

West Stand – This is often regarded as the grand stand in the Camp Nou, as it manages to house all key sections like changing rooms, player tunnels, team dugouts, and technical areas. This West stand is also the only section of the Camp Nou to be covered. Unsurprisingly, it also holds some of the most expensive tickets – including the VIP section.

There are two screens located on the north and south stands. They are used to convey a variety of information to the spectators.

Be the first to leave a review of FC Barcelona Stadium!