Top 10 Biggest Stadiums in the World

There are several aspects of football that make it a beautiful game with billions of followers around the world. One of them will be the size and breadth of football stadiums in different parts of the world. As with the most popular sports, it is not a surprise that the game demands big stadiums so that incredible memories can be created. Yet, there are some stadiums that manage to overwhelm others in their size and magnitude. The top 10 football stadiums in the world are:

The home of Borussia Dortmund 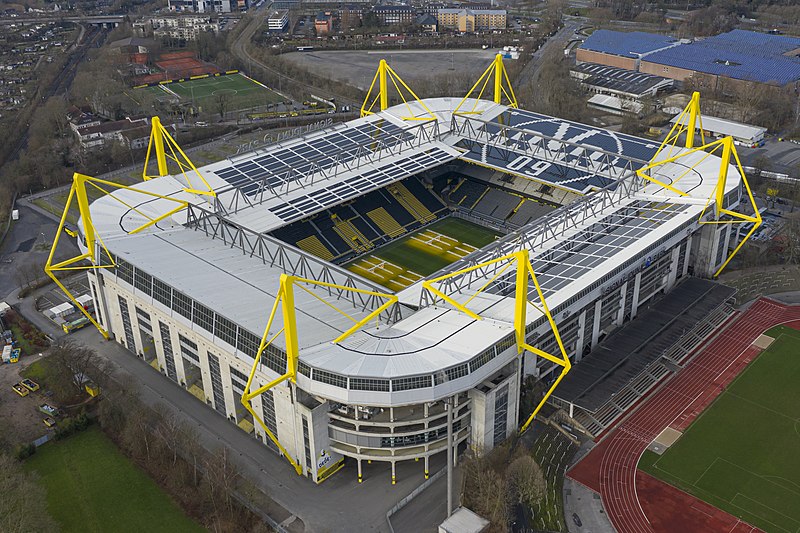 Signal Iduna Park is the home of German outfit Borussia Dortmund. Constructed back in 1974 to be one of the stadiums that hosted the 1974 World Cup, Signal Iduna Park has gone on to create a brand for itself. The stands are very close to the pitch and they make for an intimidating atmosphere to visiting teams and fans. The ground is also home to the largest free-standing stand among European stadiums, as it can hold 25,000 spectators on its own. This stand is also nicknamed as the ‘Yellow Wall’.

Unlike most stadiums in Europe that have done away with the standing spaces, Signal Iduna Park still offers fans with the option of taking stand-only tickets. Over the years, there have been several modifications to the stadium that have brought down the original capacity. The standing areas have been reduced in favour of seated rows. As one of the largest stadiums in Europe, Signal Iduna Park was able to host several games during the World Cups 1974 and 2006. 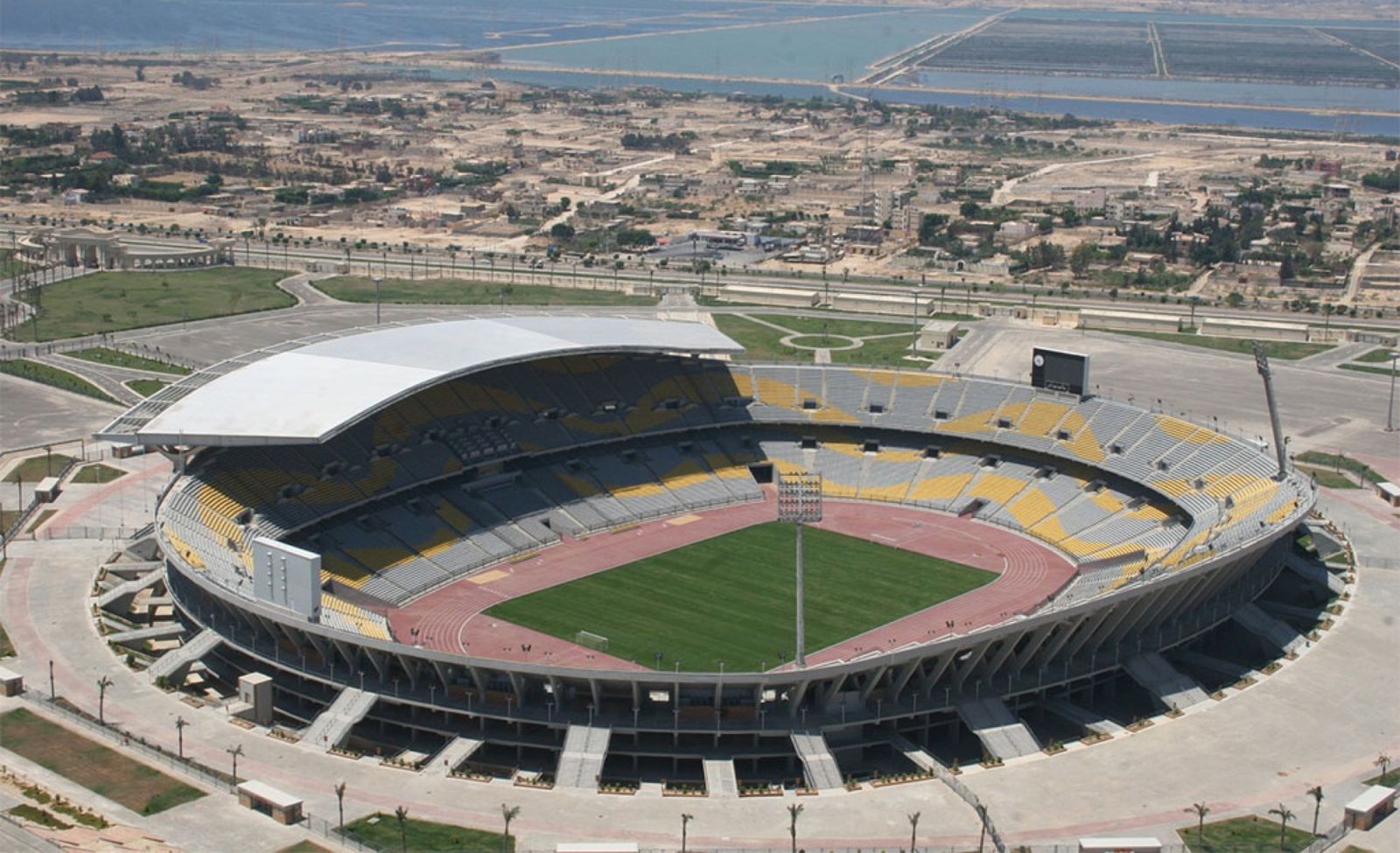 This is the second largest stadium in the African continent as it only sits behind the FNB Stadium in terms of total capacity. However, the 86,000 capacity of the Borg El-Arab Stadium makes it the largest in Egypt by a comfortable margin. Unlike many other stadiums of its kind, it has been air-conditioned in many places so that the extreme weather conditions in this part of the world are combated with great efficiency. The designers have put in a massive effort to make sure that the stadium offers every type of facility – including two sub-stadiums with a capacity of 2000 spectators.

The Egypt national football team call this stadium as the home. It recently made it to the history books after becoming the ground from where Egypt qualified to the World Cup for the first time since 1990. Apart from a football pitch, the Borg El-Arab Stadium also comes with running tracks and other sections for the Olympic Game activities. 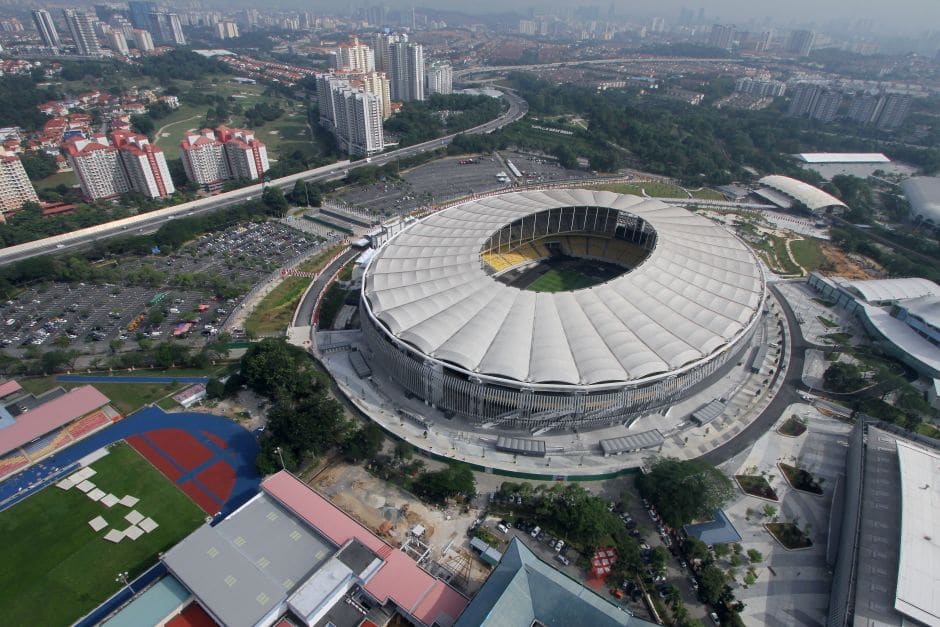 The Malaysian national football team may not be high in the FIFA rankings, but that does not stop the national team from building one of the largest football stadiums in the world. The Bukit Jalil National Stadium, which was built at a cost of RM800 million, is a colossus that can hold more than 87,000 spectators. It is the largest stadium of its kind in Southeast Asia. Therefore, it does not come as a surprise that it has hosted many other events apart from the games of the Malaysia national team.

The Bukit Jalil National Stadium has been the host for the Commonwealth Games, Southeast Asian Games, and more. This multisport venue comes with a roof and it is largely constructed out of reinforced concrete. Despite being relatively new, major renovation works have already been carried out and they have brought in much-needed features like new facilities and LED lighting. More features are in the works as retractable seats, retractable roof, and lifestyle facilities will also be included in the stadium as part of the upcoming renovation works. 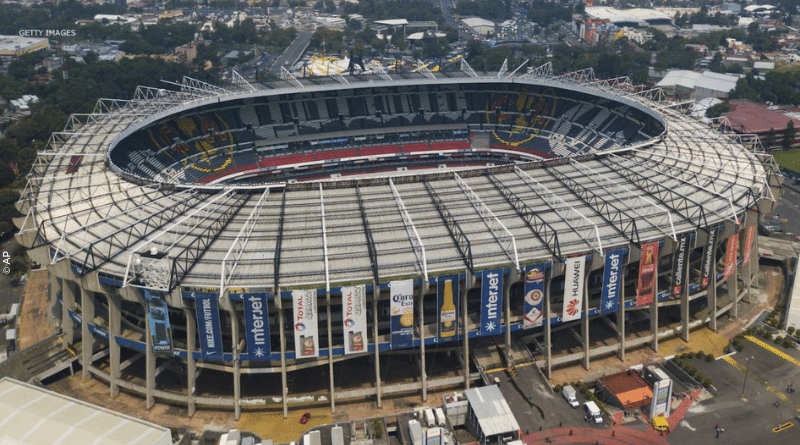 An iconic image in the Mexico City would be the Estadio Azteca, which is the home turf of the Mexican national team, Cruz Azul, and Club America. One of the major reasons behind the stadium being steeped in history is the prestige of having hosted two World Cup finals – 1970 and 1986. This stadium also witnessed one of the iconic moments in world football when Diego Maradona came up with the infamous ‘Hand of God’ goal against England in the 1986 World Cup.

Estadio Azteca is also widely regarded to have hosted the game between Italy and West Germany in 1970. This game is regarded as ‘Game of the Century’ and it witnessed Italy coming out on top with a 4-3 score after extra time. Estadio Azteca can go on to add more feathers in its cap considering that it is in line to host the games at the World Cup 2026. Apart from the World Cup, Estadio Azteca has also been the destination for Summer Olympics and the Women's World Cup in the past.

The stadium has not shown its age even now, as frequent renovation works have consistently added new features like LED panels and new leisure spaces. In recent times, the addition of executive boxes has reduced the capacity down to the 87,000s. 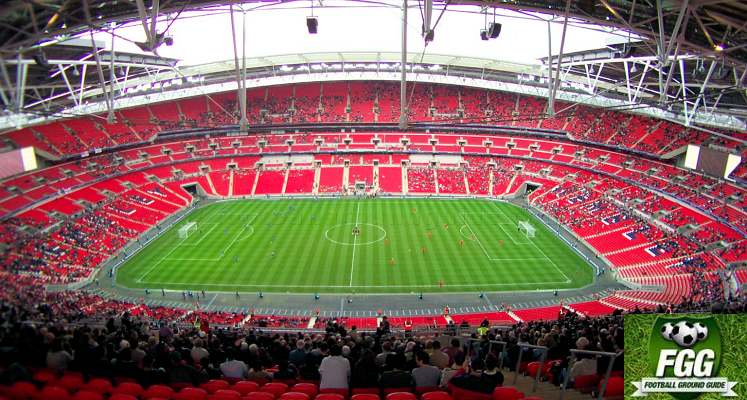 Wembley is an iconic destination for football fans in England. There was a lot of scepticism when the English Football Association decided to take down the Wembley, which is regarded as the home of football, in favour of a new ground. This new stadium opened in 2007 at a whopping cost of almost £800 million. This would translate into a figure of £1.3 billion in current values.

Despite the extravagant cost, the Wembley justified its image as one of the premier football destinations. It is the home of the England national team and it is one of the top destinations where international games are played. However, the increased construction costs forced the England FA to allow games from different competitions to take place. As a result, the Wembley now hosts games from the League Cup, FA Cup, and many other lower league competitions. It is also the destination where many event concerts are held. An iconic symbol of the ground is the huge semi-circle that can be seen from a distance.

The stadium also manages to host 90,000 under a roof – making it the largest of its category. The Wembley has already hosted major games like the Champions League final in its modern history. 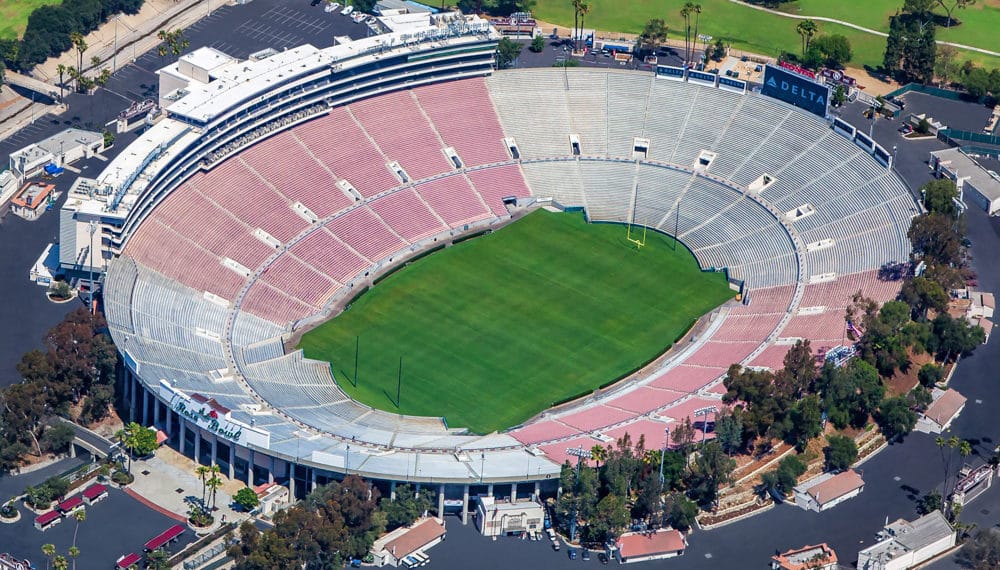 It is not a secret that Americans are fans of big stadiums and it is easy to come across behemoths when it comes to college football and NFL competitions. It could be easy to miss out football stadiums on American soil, as this sport is only now gaining traction. Yet, there are some huge football stadiums in America and the crowing leader among them would be the Rose Bowl Stadium in California.

Despite opening in 1920s, the stadium started becoming a landmark in the world of football when it hosted the World Cup games in 1994. Since then, many clubs have used this ground as their host with LA Galaxy being the most prominent tenant in recent years. One common trait that the Rose Bowl shares with many other stadiums in the United States would be the lack of a roof and this actually contributed to an immense view when Brazil and Italy played against each other in the World Cup 1994 final. 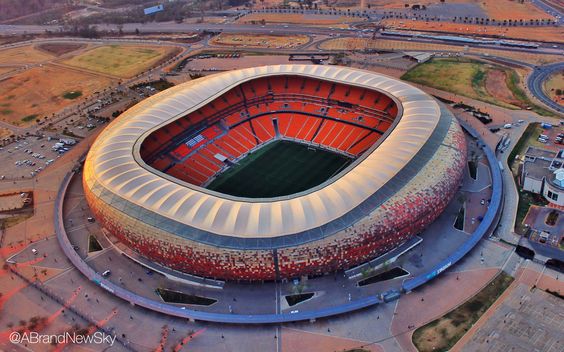 The FNB Stadium is the largest of its kind in Africa and it primarily hosts rugby union and football games. It can be quite intimidating place given its size. The ground has been utilised for various purposes in the past, but it is best known for hosting the World Cup 2010 final match between Netherlands and Spain. The FNB Stadium is also the home ground for the South African national team, while also hosting the home games of domestic outfit Kaizer Chiefs.

The stadium is also quite special since it managed to feature the last public appearance of Nelson Mandela. Even though the stadium has been around since 1987, the major renovation work in 2010 for the World Cup brought about many new features like executive suites, new roof, floodlights, and changing rooms. Apart from hosting the World Cup games, the FNB Stadium has also excelled in terms of hosting African Cup of Nations games.  The FNB Stadium is also the most modern stadiums in this part of the world. 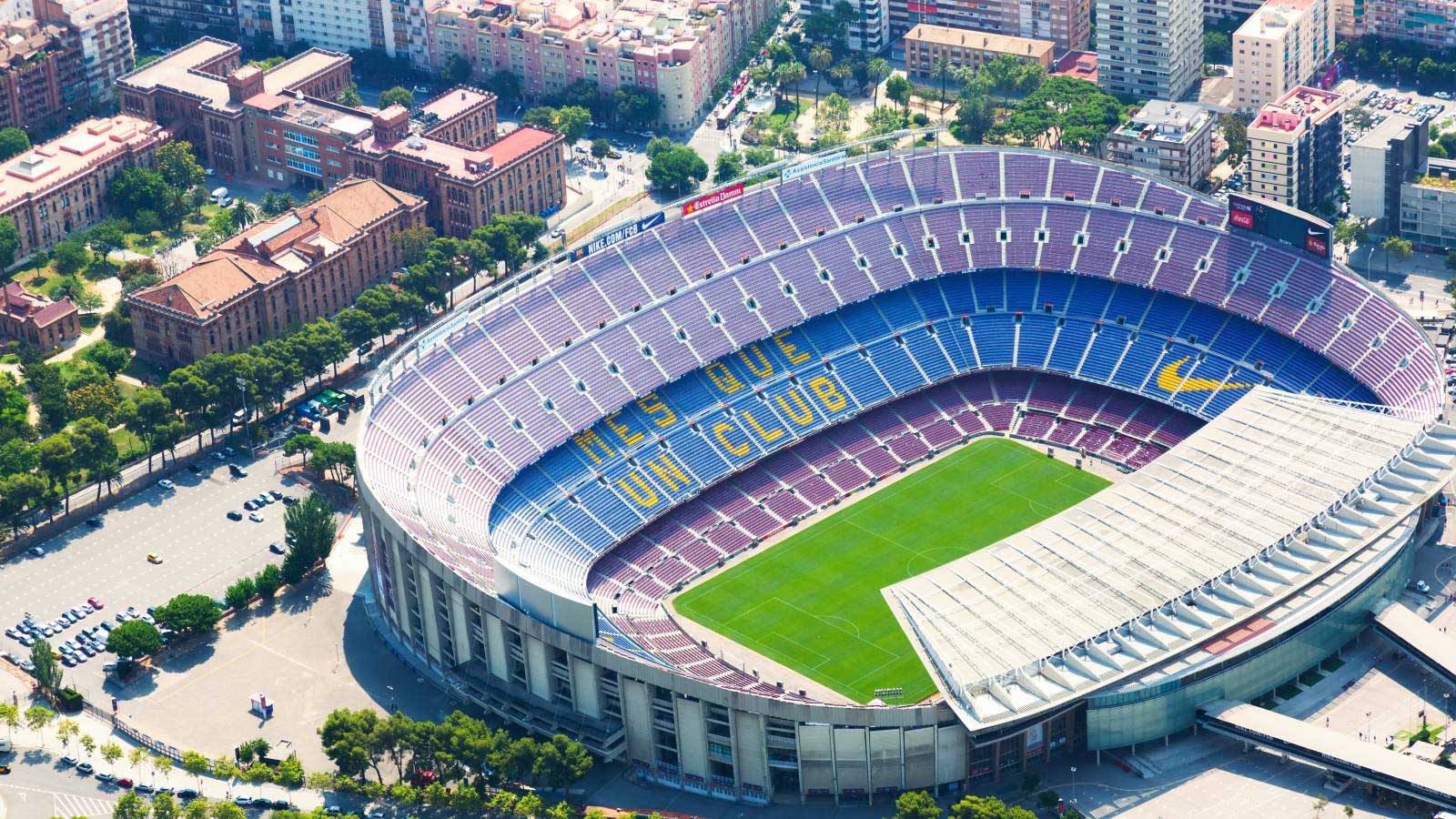 Construction Cost: €1.73 billion The Camp Nou hosts FC Barcelona and has a distinction as one of the largest stadiums in the world. It is easily the largest in Spain with its capacity touching almost 100,000. This is an impressive feat for an all-seater stadium. Over the years, the ground has managed to host every conceivable major tournament/game. It has been able to host Champions League finals, World Cup games, Summer Olympics, European Nations’ Cup, and more.

The recent expansions and renovations have ended up costing more than €600 million, which makes it one of the most expensive renovations jobs. Even after spending vast sums of money, the Camp Nou remains as one of the top European stadiums without a roof over most sections. Despite having a capacity of almost 100,000, the Barcelona board has not stopped coming out with expansion projects and the latest is set to add even more seats when it completes in 2024.

The upcoming expansion will take the seating capacity to over 10,500 and this will make the Camp Nou as the second largest football stadium in the world. It will be able to comfortably surpass the Melbourne Cricket Ground. 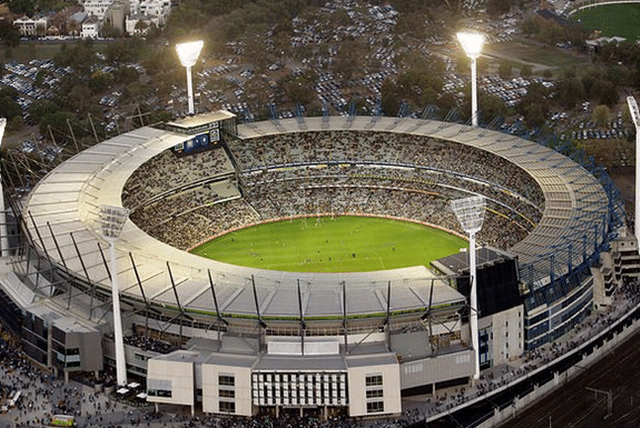 The Melbourne Cricket Ground is one of the iconic sporting destinations in the world. This is a multipurpose venue that manages to host cricket and football events. Over the years, the ground has gained a lot of prominence as a result of hosting every major type of event. The MCG, as it is also known, has been a destination for Australian Rules Football matches, Olympic events, and World Cup qualifiers amongst others.

Since the MCG has been around for a long time, it has had constant renovation works taking place to keep it in tune with the modern demands. The last major renovation took place in 2006 and it cost a sum of money that many new stadiums would baulk at. It is remarkable that the ground has been able to survive many catastrophes like the World War and still retain its position as one of the largest football stadiums in the world.

1. Rungrado 1st of May Stadium 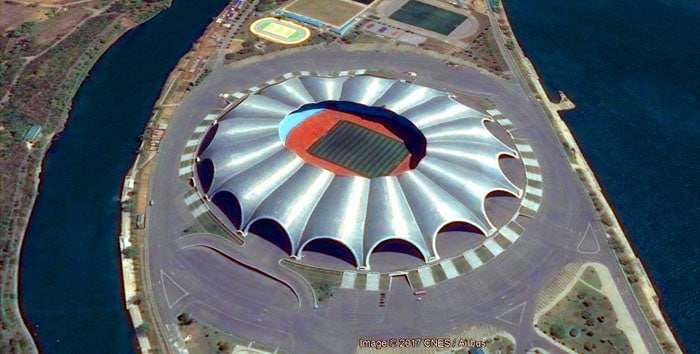 This is undoubtedly the largest football stadiums of its kind. Open the way back in 1989, the stadium is built on an area of almost 21 hectares. Since North Korean football is not really the strongest in the world, this football stadium finds its use as a multipurpose venue. This is made possible due to a scalloped roof that has many intricate works.

Even though the stadium happens to act as their home ground for the North Korean national team, it also holds a number of non-football events throughout the year. Just like the country, very little information – like construction costs – is known about the stadium.