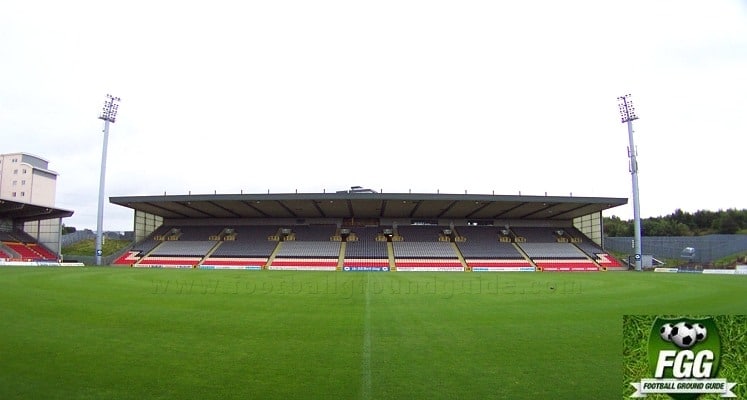 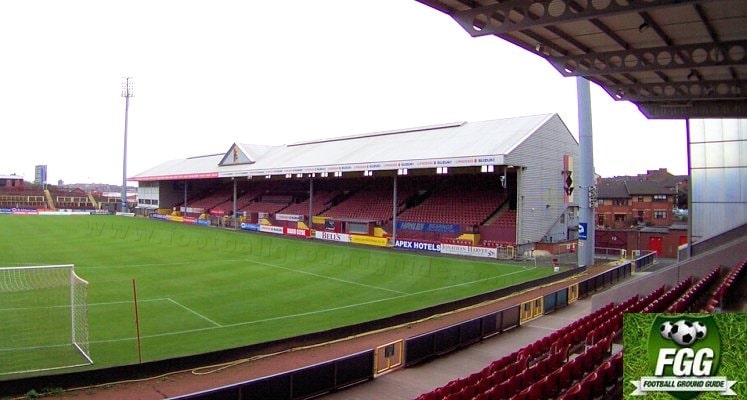 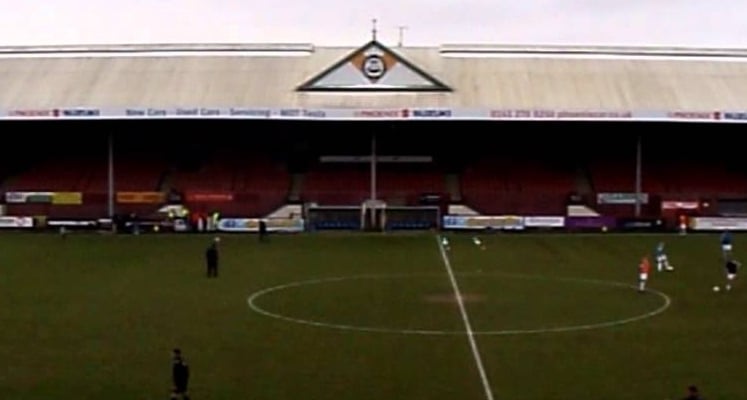 On one side of the ground is the impressive looking, Jackie Husband Stand. This is a large, covered single tiered stand. Opposite is the older Colin Weir Stand, which has raised seating above pitch level. This stand is covered and has a fair few supporting pillars which may obstruct your view. It was originally built in 1927. The stand looks a little odd, as the lower end has been given over to what looks like administrative offices. Apart from the bigger games, this stand normally remains closed.

At the North End of the ground is the new North Stand, which replaced a former open terrace. This all seated covered stand, originally only ran for around two thirds of the width of the pitch, but has been extended during the Summer of 2003, so that it now completely fills that end of the ground. Opposite is the South End, which is now unused for spectators, being comprised of a grassy bank. It was originally an open terrace, but this was demolished in anticipation of building a new stand, however, this has not materialised.

In 2017 the stadium was renamed the Energy Check Stadium at Firhill in a corporate sponsorship deal. Interestingly, Firhill is the closest League Football Ground to Glasgow City Centre.

Barry Buttigieg informs me; 'The Club have resurfaced plans to re-develop the South End of the stadium. This would include a 450 all seater stand, plus residential and office accommodation. Planning permission for the scheme has been applied for by the Club.'

Away Fans are housed in the old Main Stand on one side of the pitch. Apart from some supporting pillars that might hinder your view, the facilities inside are not bad. Entrance to the stadium is by ticket only, which need to be purchased from the ticket booth in front of the Jackie Husband Stand. Cash is not accepted at the turnstiles. Food on offer inside the ground includes a range of pies from McGhee's Bakery; Scotch Pie (£2.20), Skinny Scotch Pie (Reduced fat and salt £2.20), Steak and Ale Deluxe Pie (£2.50), Mr Singh's 'Curry in a Pie' (£2.50), Cheezy Bean Pie (£2.20) and Sausage Rolls (£2).

Firhill Stadium holds a somewhat illustrious personal record for myself. Having had a couple of beers before the game, I unfortunately needed to find the gents half way through the first half. Just as I got in there, up went a roar from inside the ground, Partick had scored. Then on returning, just as I reached the bottom of the stairs, going back up into the stand. Partick scored again! So this is still my personal record of missing two goals with one visit to the loo! Of course, I took a fair bit of ribbing from the surrounding supporters as I returned to my seat. In a dull second half, there were plenty of suggestions from the fans around me, that perhaps I should work my goal magic, by going to the gents again! Also lookout for the rather odd-looking club mascot called Kingsley.

Derek Hall informs me; 'There is a social club, located in the centre of the old Main Stand, to which anyone is welcome and entrance is free. You can also buy your admission ticket here – and enter any part of the ground with it (including the away section).' Jim McFarlane recommends the Munn's Vaults on Maryhill Road. This pub is only around a five minute walk from the entrance to the away end and has a good mix of home and away support. Further down Maryhill Road towards the city centre, there is over on the right of the road the Woodside Inn (known locally as the Woody), which also welcomes away fans. Also further along Maryhill Road (but in the opposite direction to Munn's and the Woodside, going away from the City Centre) is the Strathmore Bar which welcomes both home and away fans and it also does food.

From The West:
Leave the M8 at Junction 17 and follow the A81, Maryhill Road towards Maryhill. Turn right into Firhill Road for the ground.

From The East:
Leave the M8 at Junction 16 and follow the A81, Maryhill Road towards Maryhill. Turn right into Firhill Road for the ground.

Street Parking (although don't be surprised if you are approached by a number kids wanting to 'mind your car mister').

Maryhill Railway Station is the closest train station to Firhill Stadium, but it is still a fair walk away (20-25 minutes). It is served by trains from Glasgow Queens Street, but it may be best instead to use the Underground.

By Glasgow Underground Richard Jones informs me; 'you can alight at two or three underground stations. Probably the easiest, is to get off at St. Georges Cross, and just head North up Maryhill Road  until you see the stadium (in Firhill road just off Maryhill road). It should take around 10-15 minutes to walk. Another option is to get off at Kelvinbridge (this is slightly closer to Firhill than St. Georges Cross). Go up the stairs/escalators to Great Western Road, cross Great Western Road and turn to your right. Walk only a few metres until you come to North Woodside Road on your left. Walk down that road until you come to Maryhill Road. Turn left along Maryhill Road to get to the ground.

Alan McAulay adds, 'If you are looking to have a pre-match drink in Byres Road, then alight at Hillhead Underground Station. Most of the pubs are on the left hand side when you exit the station, although the very studenty Curlers Bar is right next to it. A better bet maybe Tennents Bar, which is further down as it has more of a 'footy -friendly' atmosphere. To then get to the ground from Byres Road turn right out of Hillhead Station and go straight along past the library and Fopp records, then turn right again. Kelvinbridge station is on your right hand side, but below street level, so keep an eye out for it' then directions are as above.

Concessions apply to OAP's , Under 18's and Students in full time education.

Map Showing The Location Of Firhill Stadium In Glasgow

Special thanks to Haydn Gleed for providing the video of Firhill Stadium, Partick Thistle. 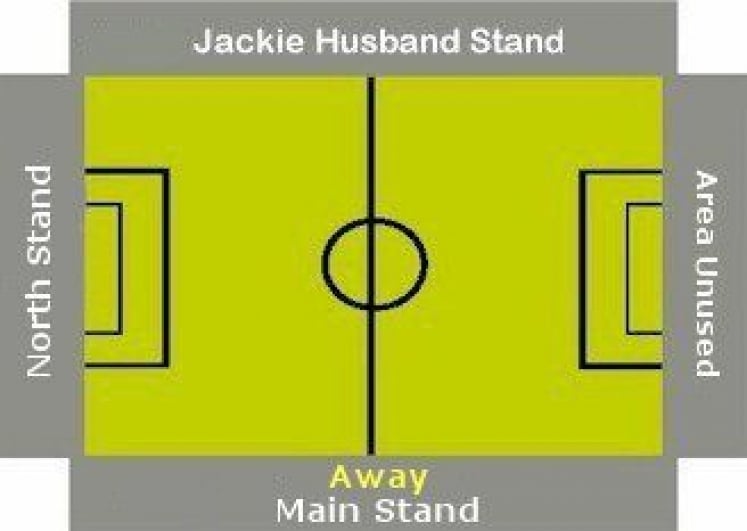