The ground was built in 1989, and replaced the former home of Muirton Park. The ground consists of four single tiered stands, that are covered and all seated. Three of the stands are of the same height, with the Main Stand at one side of the ground, being a little taller. Overall the ground has a tidy compact feel to it. There is an electric scoreboard situated in one corner of the ground.

Plans for a new road to be constructed that will link the centre of Perth with the A9, may mean that the North Stand at one end of the ground will need to be demolished to make way for it. If the new road plans come to fruition, then it is believed that the Club would build a smaller replacement stand.

Away fans are primarily housed in the North Stand will be allocated where up to 2,000 fans can be accommodated. The facilities and view of the playing action are good in this area. For those games where the away side has a large travelling support then the Ormond Stand can also be allocated as well as part of the West (Main) Stand towards the North Stand.

For a number of games the Ormond Stand serves as a 'mixed' family stand which is open to both home and away supporters with young families. On occassions when the Ormond Stand is not available to away fans, then Family Tickets can be purchased for the relevant away stand.

There is a bar behind the Main Stand which welcomes visiting supporters. Apart from being handily located it also has the benefit of showing SKY television and does food too. Otherwise there is not much else in the way of pubs close byto McDiarmid Park.

From The South:
Follow the A9 towards Perth and then on reaching Perth continue on the A9 towards Inverness. You will see the ground on your right and at the next roundabout you need to turn back on yourself and then take the slip road to the ground. The ground is well signposted around the local area.

Car Parking
There is a good sized car park at the ground which charges £5 per car. However it can be quite time consuming after the end of the match to exit.

Perth Railway Station is nearly three miles away from McDiarmid Park, which is really too far to walk. Best bet is to grab a taxi. Or alternatively, you can catch the Stagecoach No 2 bus to the ground from the city centre up to the ground from Mill Street (Stop B). If you turn left out of the station into Leonard Street with the Queen's Hotel on your right, proceed along Leonard Street as it bears right and becomes Hospital Street. At the end of Hospital Street bear left and go straight across the main crossroads, onto South Methven Street. Then on reaching the traffic lights with a Ladbrokes on one corner turn right onto Mills Street. The Bus Stop is a short distance along on the right.

Perth Hotels - Find and Book Yours And Help Support This Website

If you require hotel accommodation in Perth then first try a hotel booking service provided by Booking.com. They offer all types of accommodation to suit all tastes and pockets from; Budget Hotels, Traditional Bed & Breakfast establishments to Five Star Hotels and Serviced Apartments. Plus their booking system is straightforward and easy to use. Yes this site will earn a small commission if you book through them, but it will help towards the running costs of keeping this Guide going.

* Must be accompanied by an adult and maximum of two Under 12's per Adult.
** Unaccompanied adults or children will not be admitted into this stand.

For home supporters there are 10 wheelchair spaces available in the Main Stand plus another 10 in the East Stand. Away fans also have 10 places available on a newly constructed viewing area in the Main (West) Stand, with an accessible toilet facility nearby. Places should be booked with the Club in advance of the game. Disabled supporters are admitted at a cost of £10, whilst the carer is admitted free.

In addition the club has 20 places for those with a visual impairment. An induction loop is available providing match commentary.

Map Showing The Location Of McDiarmid Park In Perth

Special thanks to Stephan Hoogerwaard for providing the McDiarmid Park photos. More photos from Stephan's footballing travels can be found in his online photo album. 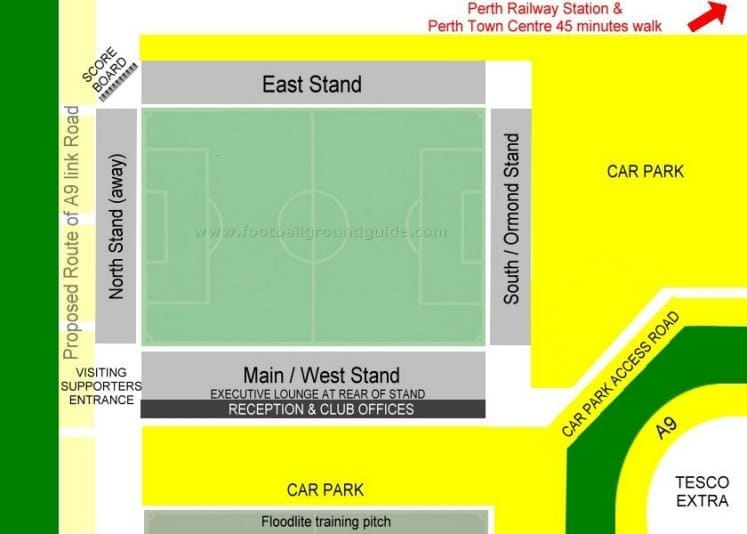