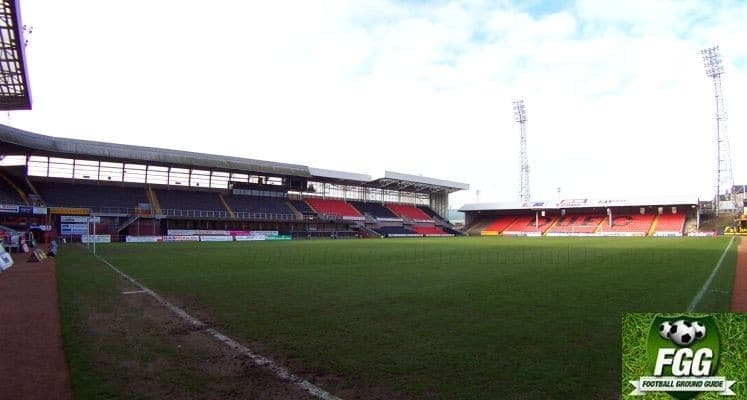 The ground was improved in the 1990’s with the construction of two new stands and an extension to the existing Main Stand. One of these is the impressive two tiered George Fox Stand, running along one side of the pitch. This stand has a large lower tier and a smaller top tier. It opened in 1992 and was named after a former Chairman of the Club. On the other side is the Main (South) Stand, which was renamed the Jerry Kerr Stand in 2003, after a former player and manager. As Aidan Hegarty informs me; ‘The original Main Stand was opened in 1962 and holds a place in the history of Scottish football grounds in being the first in Scotland to be constructed with a cantilever roof to provide column free viewing’. It is also unusual in that the stand is slightly ‘L’-shaped, just extending around the South East corner of the stadium. Niall Wallace adds; ‘It was intended at the time that the whole ground would be re-built in a similar manner to the Main Stand, but due to lack of finance it never happened. It is worth noting though that the Club was the first ever to have a glass fronted lounge in the Main Stand for the benefit of sponsors. This was opened in 1971 and overlooked the pitch, something that is now a common sight in grounds across the country today’.

The Main Stand was extended in 1997 so that it now runs the full length of the pitch. The extension replaced what was known as the ‘Fair Play Enclosure’, so named as it was funded from an award made to the Club from UEFA in 1987. The stand is two tiered and has a strip of perspex running across the back of it, just below the roof to allow more light to reach the pitch. The relatively new extension to the stand can be identified as it has an unusual roof jutting out towards the pitch. At one end of the ground is the West Stand (known affectionately as ‘The Shed’), a former terrace with seating now fitted to it. Parts of the original terrace that are no longer used for spectators can be seen on either side of it. There are a couple of supporting pillars in this stand that could hinder your view of the pitch. Opposite is the covered two tiered East Stand, opened in 1994. This was renamed the Eddie Thompson Stand in 2008 after the Club Chairman.

Away fans are normally housed in the Jim McLean Stand, which is on one side of the Jerry Kerr (Main) Stand on one side of the pitch. Around 1,400 supporters can be accommodated in this area. For old firm games and local derbies, then the West Stand at one end can also be given to the away support, as well as additional blocks in the Main Stand, increasing the allocation to around 3,500. George Hobb a visiting Hearts supporter adds; ‘the ground can sometimes lack a little atmosphere. Plus try to avoid arriving at the ground early, so that you get to miss that awful club mascot!’. I have also received reports of fans being ejected from the ground for persistently standing during the game, so be on your best behaviour.

The Centenary bar near to the ground welcomes both home and away supporters. The bar has two rooms within it, one of which is used for home fans and one for away supporters. George Hobb recommends ‘The Clep Bar on Clepington Road. Great pies, friendly bar staff and very reasonable prices. It is only five minutes walk from the ground’.

From The South
Follow the A90 through Dundee. Leave the A90 at the junction with the B960 (sign posted ‘Football Traffic’/Dundee), and turn right onto Clepington Road (B960). Continue along Clepington Road for one mile where you will reach a roundabout. Go straight across the roundabout and after a short distance you should be able to see some floodlights over beyond the houses on your right. Take the 2nd right into Arklay Street and then right into Tannadice Steet for the ground. Street parking.

From The North
Follow the A90 through Dundee. Leave the A90 at the junction with the B960 (sign posted ‘Football Traffic’/Dundee), and turn left onto Clepington Road (B960). Then as directions above.

Dundee Railway Station is over two miles away from Tannadice Park and is quite a walk away from the ground (25-30mins). Best to jump in a taxi.  Leave the station and cross the road at the predestrian crossing. Take the exit to the right before the walkway enters the Nethergate centre, this exit has steps down to Union Street. Go to the top of Union St & turn right into the High St, after a couple of hundred yards veer left into the pedestrianised Murraygate and proceed to the Wellgate centre. Go via the escalators in the Wellgate centre to the top floor of the centre and exit onto Victoria Road. (If Wellgate is closed, turn left along Panmure Street, right up Meadowside and right onto Victoria Road to rear of Wellgate Shopping Centre).

Here you have two choices, via the Hilltown (Shorter distance but like climbing the north face of the Eiger) or via Dens Road (much longer but far less likely to induce a heart attack).

Option 1 (for those fit enough) cross Victoria Road to the foot of the Hilltown walk up this for approx 1/3 mile (it feels like 3) till you reach the junction of Main St & Strathmartine Road this is easily recognisable by the ornamental clock near the junction. Turn right onto Main St and proceed until you reach the junction with Isla St (Church on the corner opposite the excellent Snug Bar). Turn left into Isla St & you will see the ground directly ahead of you.

Option 2 Turn right onto Victoria Road proceed about 1/4 mile, veer left at the Eagle Mills into Dens Road. Pass Dura Street, Alexander Street and Dens Road Market then right into Arklay Street. Once you reach Tannadice Street you can see the Tannadice ground.

Aidan Hegarty adds; ‘when progressing through the Wellgate centre the security staff can get a bit over-zealous on matchdays so hide those team colours at that stage’. Iain Thomson adds; ‘Bus Number 18 runs past Tannadice Park and bus 1a drops you off right below Dens Park. It leaves from Bus Stop A3 next to the High School of Dundee in Albert Square in Dundee City Centre. A single Adult fare costs £1.60’. Visit  www.dundeetravelinfo.com for more information.

Thanks to Aidan Hegarty and Neil Gellatly for providing the directions.

Concessions apply to Over 65’s and Under 18’s. Full Time Students can also qualify for the concessionary price for this part of the stadium providing they have a valid matriculation card.

There are 24 wheelchair spaces made available for away supporters in the rear of West Stand, which is the traditional home end of the ground. Disabled supporters are admitted free, whilst helpers are charged the normal ticket price. Spaces should be booked through your own club prior to matchday.

One of the most unusual aspects of visiting Dundee United is seeing how close the ground is to their rivals Dundee. They are literally a few hundred yards apart on the same road. I believe that these two grounds are the closest together of any in Britain.

Dundee Hotels - Find and Book Yours And Help Support This Website

If you require hotel accommodation in Dundee then first try a hotel booking service provided by Booking.com. They offer all types of accommodation to suit all tastes and pockets from; Budget Hotels, Traditional Bed & Breakfast establishments to Five Star Hotels and Serviced Apartments. Plus their booking system is straightforward and easy to use. Yes this site will earn a small commission if you book through them, but it will help towards the running costs of keeping this Guide going.

Map Showing The Location Of Tannadice Park In Dundee

Special thanks to Owen Pavey for providing the layout diagram of Tannadice Park, Dundee United.