Now I will be quite honest with you. I am not much of a fan, nor really like new build stadiums. Give me an old football ground full of character and I am happy. So what I am really trying to say is that when it comes to new stadiums in takes a lot to impress me. I was lucky thanks to a Spurs supporting friend to be offered a ticket for the first ever football match to take place at the new stadium, which would be the first test event of two required to gain a safety certificate to allow the stadium to fully open. This took place on Sunday, March 24th for an Under 18 Academy Match between Tottenham and Southampton. I was looking forward to seeing the new stadium and adding another stadium visit to my rather long list. From the photos I had seen previously, it looked impressive, but with all the delays and hype, I wondered if it would live up the expectation?

I took a leisurely trip down by train from the Midlands arriving at London Euston around 11.30. It was then a case of a ten minute tube ride over to Seven Sisters. I then jumped on a bus heading down the High Road towards the stadium. Although it was a three o'clock kick off there were already plenty of Spurs fans making their way to the ground. I deliberately got off the bus a few stops early, to walk the rest of the way so that I could build up expectation as the ground slowly revealed itself to me.

Now I always thought the exterior of the old White Hart Lane ground was rather dull, just concrete and pebble dash, from what I can remember. But as I first glimpsed the new stadium, I first found it hard to believe that they had managed to fit such a large tall stadium into that space. I was captivated by the external modern look. It is certainly an attractive mixture of glass and shaded panelling and this is further enhanced by large LED screens. A number of the panels were open to allow more air to circulate to the pitch and this made it even more eye catching. I noticed that was quite a queue already to visit the Club Megastore, however I was surprised to see that people had to first have bags searched by security and then go through a metal detector before they could enter the shop (see photo below). 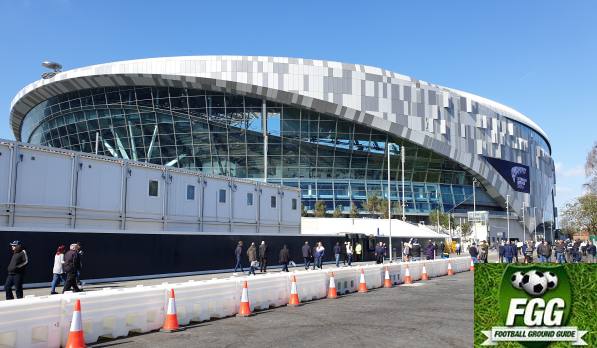 The turnstiles were due to open at 1pm so there was just enough time to complete an external lap of the stadium, before joining the queue to enter the South Stand. I have to say it all looked very smart and I was now eager to get inside. Getting into the stadium was first via going through a cordon of stewards, who checked tickets, before then going up a flight of stairs to reach a row of metal detectors. Now I only have had to go through a metal detector once before to gain entry at a football match at the old Boleyn Ground the former home of West Ham United and these were not common then. The Met Police had decided to bring them along for the occasion as Birmingham City were the visitors. These detectors at Tottenham were similar, being of the type you would find at the entrance to an Airport Departure Lounge. Once through this there was a steward with a hand-held detector, who then did another sweep over your front and back. The detectors kept bleeping, but apparently, I didn't warrant any further investigation. It was then onto the actual glass doors of the stadium, where the turnstiles lay. There was a brief delay on our turnstile, as they didn't seem to be able to open the door, but this can be forgiven for their first time. It was then a case of tapping your season ticket card onto the reader and I was in. It is worth noting that the Club have a strict bag policy whereby carrier bags that are larger than 30cms long and 30cms high and are not clear coloured won't be allowed into the stadium (apparently bags from the Club Shop are allowed). Whilst only personal bags that are A4 in size or smaller (maximum 21cms x 30cms) will be allowed.

I quickly moved through the concourse that looked quite good, with plenty of imagery on the walls, to actually get into the stadium and when I did I was actually taken a little back by the sight that met my eyes. With a capacity of 62,062 the stadium is the second largest in the league (only Old Trafford is larger) and it certainly looks it. Two large four tier stands on either side, with a three-tier North Stand directly opposite where I stood. Even some further glass fronted areas just below the roof, which is fine looking and that sweeps around the ground.

My View On First Entering The Stadium On moving down to the front of the stand I was surprised to find metal rails along the rows of seats so that they are already in place if and when safe standing is allowed in the Premier League. I also could see at pitchside just how close fans are too the pitch, which to me is always a good indicator as this helps boost the atmosphere inside the ground. Looking back up at the South Stand, I was amazed by how tall and how steep it is. With a capacity of 17,500 spread over 82 rows, it is the largest single stand in the country. Inspired by the ‘Yellow Wall' at Dortmund, I am sure it will be marvellous to see and hear when full for a league match. I couldn't also help but notice the giant screens in each corner of the ground. Not only are they huge and look stunning (I wish my telly had just as good a picture) but again I believe this is another first for a stadium in this country, by having four.

Seats With Rails And A Long Way Up To The Top! I decided to walk around the front of the West Stand, to my left and from here, I could really admire the size and design of the South Stand. Its semi-circular look, giving the stadium an interesting a different look to the other stands. It was also at this point that I noticed the large gold coloured cockerel perched on its roof, standing tall and proud.

The South Stand With Cockerel On The Roof As I made away around to where the away fans were located in the lower tier of the North East corner then I encountered my first disappointment with the new ground, the seats weren't padded, which I was surprised at considering how much has been spent on the stadium. So even Stadium MK or dare I say the Emirates Stadium, still has one up on this stadium as they do. I was unable to access the away fans section as there were actually Southampton Supporters attending for this game. This area was bathed in bright sunshine and some fans were holding up their hands to their foreheads to try to see a better view. It was time to check out the facilities of the stadium and I made my way down to the concourses. They were bright and had been well decorated with lots of interesting Tottenham related images adorning the walls. Even the toilets were rather ‘posh' by football standards. the Club were offering a Pie and a Pint' for £5, for the first hour after the turnstiles opened, but everywhere had sold out of pies well before 2pm, so at least some things never change at football grounds… I made my way around to the large concourse behind the South Stand, where the Goal Line Bar is located. I was taken aback not just by its sheer size and length (apparently it is the largest of any ground in Europe), but also that apart from the long bar there were a number of food outlets, even one with its own Pizza ovens. The stadium is a cashless one, so you need some form of electronic payment to buy food or drink within the stadium. The stadium has its own craft ale brewery called Beavertown and they have a range of draught and canned beers available, including the 7.4% Black Betty (£5.50 a can). But I wanted to see these new fast beer dispensers in action that can pour a pint in around three seconds, so I made my way over to a Tap Inn, which are dotted around the stadium and ordered a pint of Amstel. I was not disappointed. Seeing the plastic glass fill up from the bottom, in record quick time, seemed rather bizarre, but it works and it works well (you can see it in action on this YouTube video). Hopefully, this will help shorten queues.

After this liquid sustenance, it was time to walk up to the top of the South Stand, all 82 rows! The view from up there was fantastic, but it is not for the faint-hearted as it is very steep, which is needed to keep fans close to the playing action. In a stadium that is full of pleasant surprises and nice touches, again I was taken aback little to find viewing steps at the very top so that you could feast your eyes on the panoramic London skyline. My seat was in the lower part of the South East area of the ground, where there were standing rails already fitted. I noticed that the stadium PA was good and not overbearingly loud as in some other venues. Once the game got underway I noticed a number of people who were standing in this area, were asked to sit down by stewards. This seemed rather ironic considering that it has been designed with ‘safe standing' in mind. Although the attendance had been restricted to 30,000, I caught glimpses that the acoustics of the stadium are good and that it should be a great atmosphere when full. After the match which the home side won 3-1, I walked up to Seven Sisters for the tube back to Euston, as the buses were rammed full and hardly moving anyhow in a long slow line of traffic. I had forgotten how long the walk is, it took me at least 30 minutes.

View From The Top Of The South Stand There is no doubt that the new Tottenham Hotspur Stadium is a quality one with little expense spared (apart from the lack of padded seats) and it certainly had been designed with the fan in mind. It is certainly the best stadium in the UK by far (and that includes Wembley Stadium) and I will relish the chance to go back there to watch a League or Cup Match there one day.

Also take a look at our Guide to the new Tottenham Hotspur Stadium.