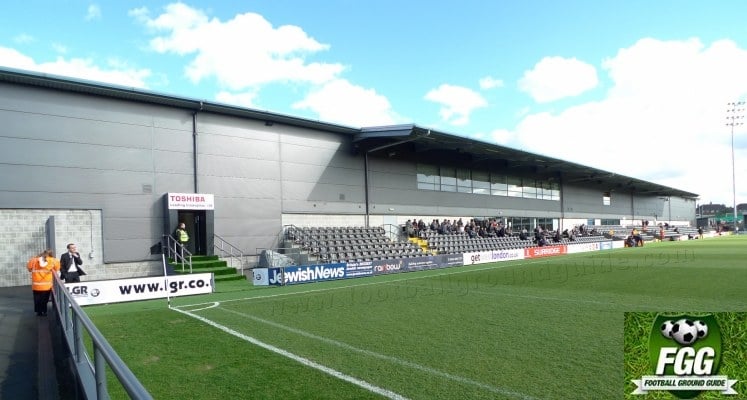 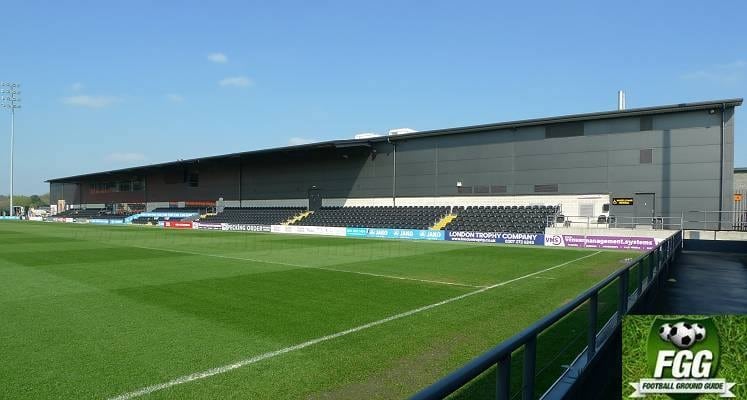 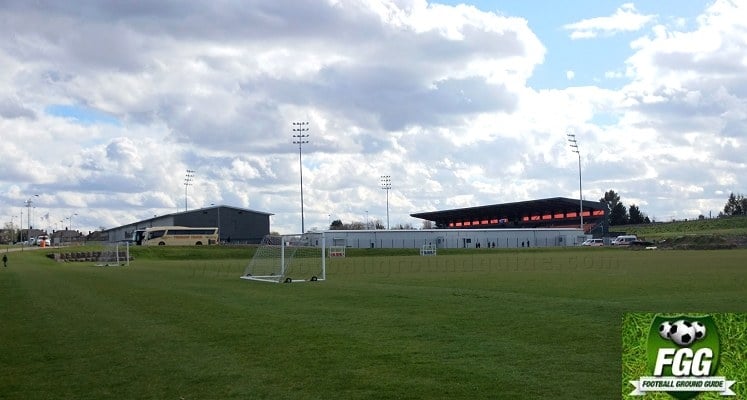 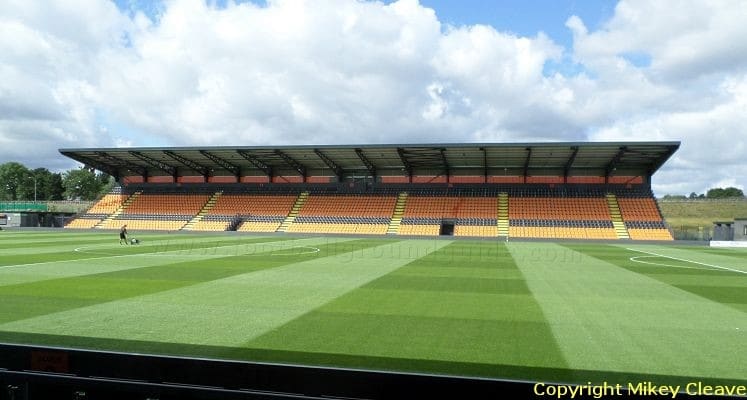 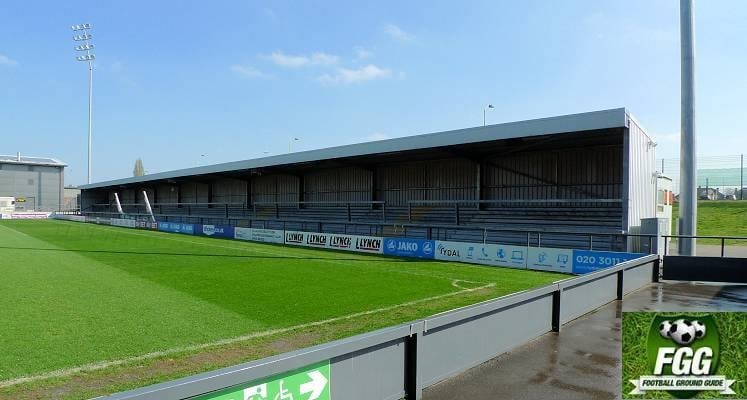 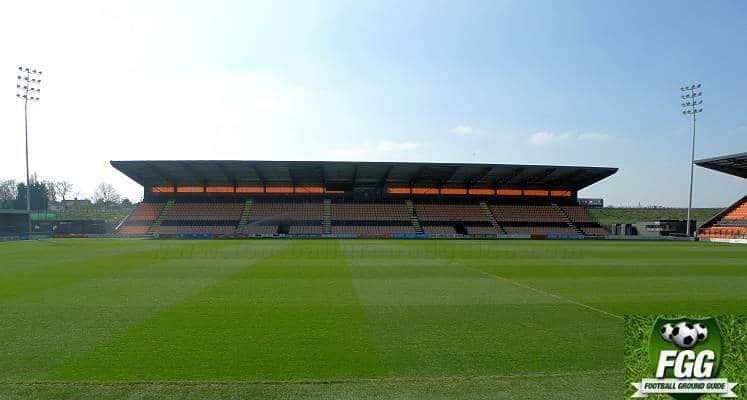 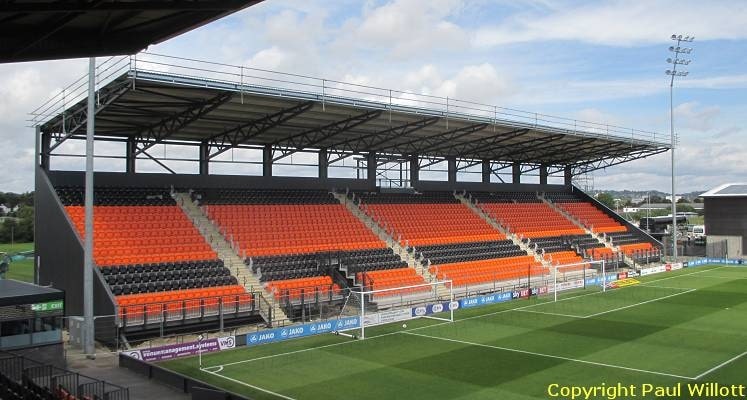 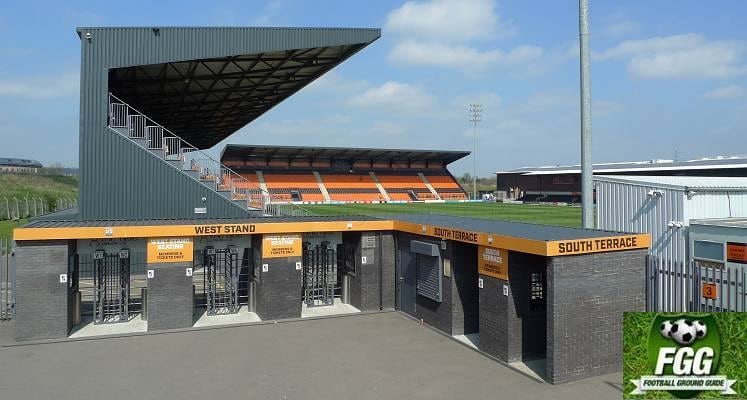 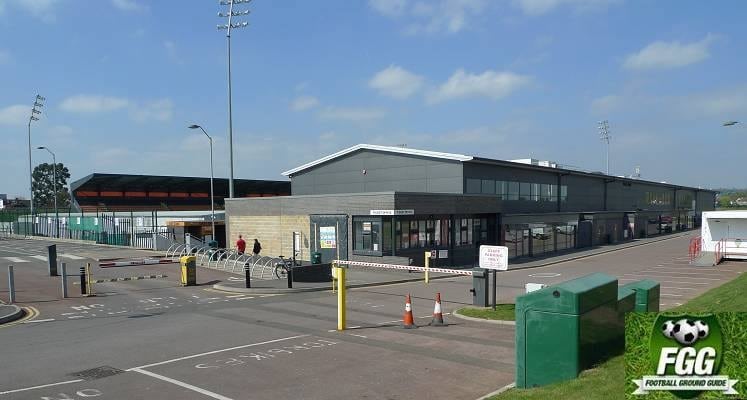 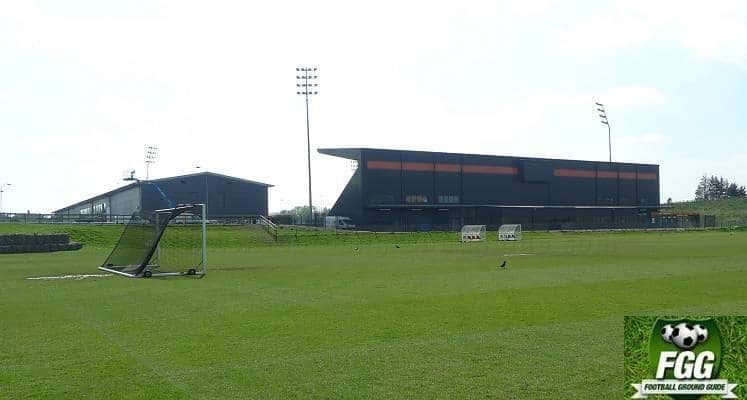 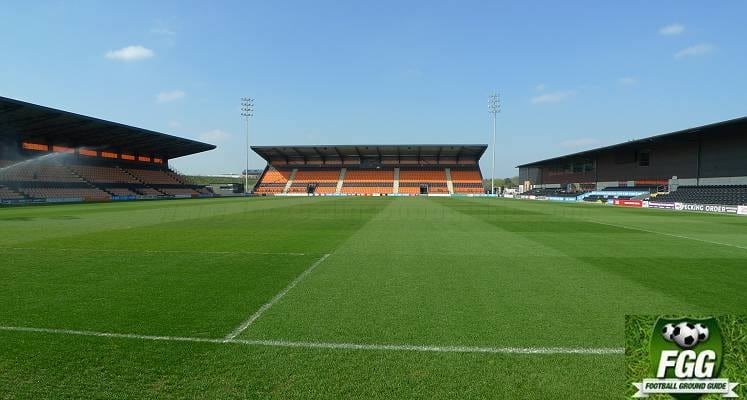 The Hive Stadium was opened in July 2013 and is located in a pleasant setting, within a sizeable park/playing fields area, that also has a London Underground line running behind one side of the ground on a raised embankment. If walking down through the park towards the stadium from the direction of Canons Park Station, then you can also see the Arch over Wembley Stadium in the distance.

The stadium has seen some investment recently with the building of a new stand at the North End of the ground. Replacing a small terrace, the Stand ’66 as it is now called was constructed in only four months during the Summer of 2016. The stand is covered, all seated and is of a good size, having a capacity of 1,922. Pleasingly it is of the same height as the Main Stand and has a very similar design. This end is given to away fans. The Main or Legends Stand as it is now known, on the West side of the stadium, is like Stand ’66, single tiered and covered. It does though have a larger all seated capacity of  2,684 fans. On the opposite side is the Hive Stand, which incorporates the Bumble’s Family Area. This is currently a rather plain looking affair, as essentially it is an office building that has had its roof extended outwards towards the pitch, and then had six rows of seats installed in front of it, leaving a large back wall exposed of the office building. Oddly the roof doesn’t extend the whole length of the stand, meaning that some of these seats are uncovered. This area has 750 seats, some of which (in the wing area) are not under cover. Both sides of the stadium have small electronic scoreboards mounted at the back. At the South End of the ground is the small covered Bees Terrace which is only a few rows high and has a capacity of 1,000. The Hive Stadium is completed with a set of odd-looking floodlights.

For some odd reason, the teams emerge from near one corner of the stadium between the Stand ’66 and Hive Stands, to “Sweet Child O’ Mine” by Guns and Roses, which is played over the rather loud public address system. Not that I am complaining, I am in fact a big fan of the former Guns and Roses lead guitarist Slash!

After spending 106 years at their old Underhill ground, the Club moved to the Hive Stadium in 2013. Originally envisioned as a site for a new ground for Wealdstone FC, Barnet were able to take over the project, when Wealdstone encountered financial difficulties. The Hive Complex which is also home to the Club’s training facility is situated in Edgware, which is just under six miles away from the site of the Underhill Stadium.

The Club have received planning permission to increase the capacity of the Hive Stadium to 8,500. This will involve the construction of a new covered seated South Stand at one end of the ground, replacing the current Bees Terrace. Although similar in design to the North Stand which was opened in 2016, it will be larger with a capacity of over 2,000. The Club will also replace the seating on the East side of the stadium with terracing. No formal timescales have yet been announced as to when these works will begin, although it is indicated that this may be within 2-3 years. I guess if Barnet returns quickly to the Football League that this may kick-start the project.  Drawings of the plans can be viewed on the Barnet FC website. Visiting supporters are housed in the modern Stand ’66 at one end, where 1,922 fans can be seated. The stand does not have any supporting pillars and has a good height between rows, meaning that you get a good view of the game, Generally, the facilities within the stadium are very good and the away supporters bar located behind the stand is excellent. The stewarding although vigilant is generally relaxed and friendly. I did notice that the most of the singing Barnet fans tended to be in the Main Stand, rather than in a more traditional ‘home end’, although a drummer was sporadically trying to get things going in the home terrace. Entrance to the ground is via electronic turnstiles, meaning that you need to insert your ticket into a bar code reader to gain entry. Food on offer inside the stadium includes the standard fayre of Cheeseburgers (£4.50), Burgers or Hot Dogs (£4) and a selection of Baguettes (£3.50 whole, £2.50 half), but alas no pies.

The Club have commenced with the construction of a new covered seated stand at the North End of the stadium. The existing terrace which was used by away fans has now been dismantled and will be replaced with the new seated stand. The new stand will have a capacity of 1,890 seats and should be ready for the start of the 2016/17 season. Away supporters are treated to their own bar within the stadium, which is located behind the North Stand. This spacious bar has a large screen showing Sky Sports. The bar is open throughout the game and for a short time after the final whistle. The only downside is that the beer is served in plastic glasses.

There is also the Hive Bar at the stadium but this is for home fans only. The nearest pub is Moranos on Station Road, only a short walk from Canons Park Underground Station (come out of the station, turn right and it is in the row of shops further down on the right). This Irish themed wine bar is quite comfortable and has a number of large screens showing the early kick off on BT Sport. It is then only around a 10 minute walk to the away turnstiles, cutting through the playing fields (see by Tube below).

Quite close to Kingsbury Tube Station there is a Wetherspoons pub called JJ Moons (which will be familiar to many who have travelled to Wembley Stadium which is not far away). If travelling on the Jubilee Line from Central London, then Kingsbury is only two stops before Canons Park. The address of the pub is 553 Kingsbury Road. Simply turn left out of the station and the pub is down on the left.

Leave the M1 at Junction 4 and take the A41 towards Edgware. At the first roundabout take the 3rd exit onto the A410 towards Harrow and Stanmore. At the next small roundabout turn left at the Esso Garage/McDonalds towards Edgware. After passing through a set of traffic lights with the Masons Arms on one corner and then a Peugeot Garage on the left then at the next set of traffic lights turn right into Camrose Avenue. The entrance to the Hive Stadium is down this road on the right.

There is a large car park at the stadium, with 500 spaces, costing £5 per car. However with only one exit available then expect some delays after the game on leaving the car park. Otherwise, street parking, although no parking is available on Camrose Avenue itself. There are also 150 car parking spaces at Canons Park Tube Station which costs £2 all day on a Saturday. It is no more than a ten minute walk from the station to the Hive. There is also the option of renting a private driveway near in the local area via YourParkingSpace.co.uk. The nearest London Underground station is Canons Park which is on the Jubilee Line. It is around a ten minute walk away from the away end of the Hive Stadium (or 15 minutes to the home Main Stand seating). As you come out of the station turn left and at a convenient point crossover to the other side of the road. You will come to some metal railings where there is an entrance to some playing fields which you can walk through to the ground. This also brings you out at the North End of the stadium which is reserved for away fans.

If travelling from Central London on the Jubilee Line then after leaving Queensbury Station, you can enjoy a very good view of the Hive Stadium which you will pass on your right.

Neil informs me; ‘If travelling down from the North and you wish to avoid Central London, then you can take a train from Watford Junction to Kenton Railway Station, which is located just over two miles away from the Hive. Or from Kenton you can take the five minute walk to Northwick Park tube, then down to Wembley Park, to change for Canon’s Park. With the walk and two tubes, the normal travelling time is around 30 minutes from Kenton’.

For travelling across London by public transport I recommend planning your journey ahead with the use of the Travel For London Plan your journey website.

Concessions apply to Under 21’s and those aged 65 and over.

* Please note that if only a small away following is expected then away fans will be seated in the Legends (Main) Stand.

The Club no longer produces a printed matchday programme. Instead, a digital programme is free to download from the Barnet FC website from 9am on the day of the match. Printed team sheets can be purchased from the club shop from 30 minutes prior to kick off.

Enfield are the traditional rivals along with Stevenage.

Map showing the location of the Hive Stadium, Pubs and Tube stations

Special thanks to Mikey Cleave for providing a photo of the Main Stand and to Gavin Black for a the picture of the North Stand.

Thanks to Owen Pavey for providing the ground layout diagram of the Hive Stadium. 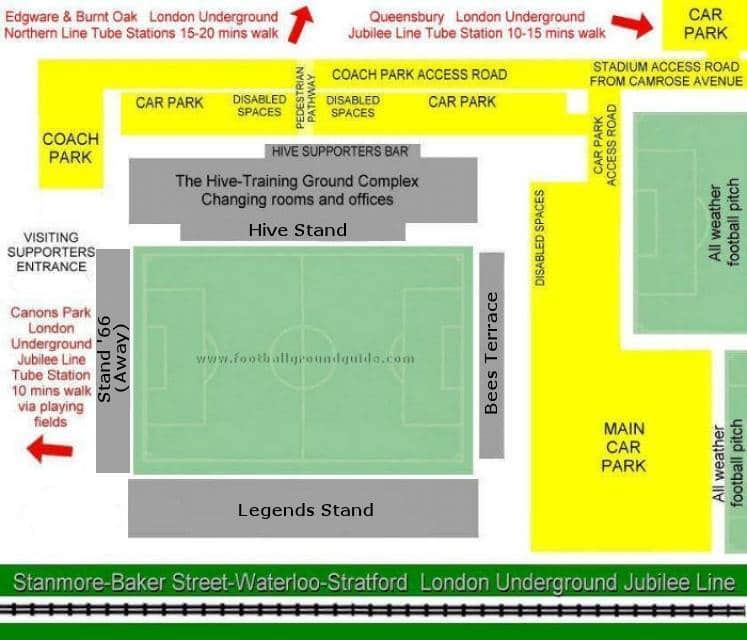