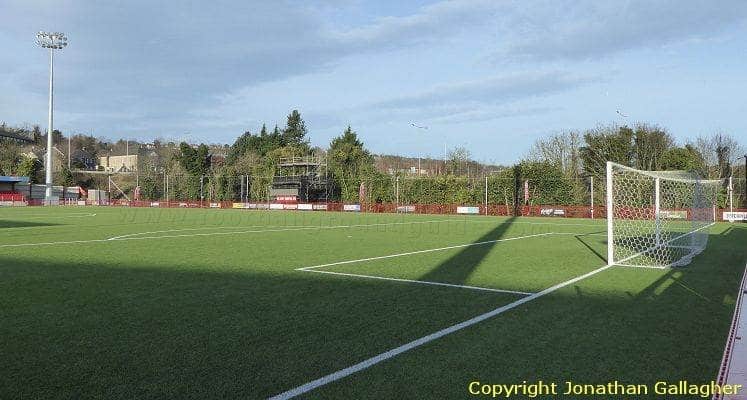 Inver Park has seen some welcome investment in recent years, with a new stand being built at one end, the Main Stand being extended and a new artificial 3G pitch installed. On one side is the Main Stand. This covered stand was previously mostly covered terrace with a block of seating at the rear. The seating has been extended to fill most of the Main Stand area, with a portion of terrace on one side. Although it now contains a number of new shiny red seats the stand, still looks quite dated. This is due to the fact that the roof of the stand has a number of supporting pillars that run across the middle of the stand, as the roof doesn’t extend fully over the front rows. Opposite the Church Road Side, doesn’t have any facilities for spectators, just having a narrow pathway running behind the pitch perimeter fence. On the halfway line is a tall scaffolded structure that serves as a television gantry.

At one end is a covered all-seated stand that was opened in 2019. This stand is called the Larne Port and P&O Ferries McKay Stand (I bet the commentators love saying that one). This stand is comprised of 6 rows containing 800 seats and is normally given to the away fans. At the other end, the ground is overlooked by St Cedma’s Church and is aptly called the Church End. Directly behind the goal is a small portion of open terrace, that is five steps high. Towards the Main Stand at that end is a large rectangular two-storey building, that houses the club offices and team changing rooms. The stadium has a set of four tall modern floodlights.

Special thanks to Jonathan Gallagher for helping out with a lot of the information on this page and for providing the photos of Inver Park.

The Club have received planning permission to construct an 800 capacity covered all-seated stand at the Church End part of the ground. This would mirror the Larne Port and P&O Ferries McKay Stand opposite.No timescales have been announced as to when this might be built but it could well happen in the next season or two. The picture above is supplied courtesy of Larne FC.

Away fans are housed in the Larne Port and P&O Ferries McKay Stand at one end of the ground. This stand is all-seated and has a capacity of 800 fans. This modern structure offers reasonable views of the playing action and is free of supporting pillars. If there is a good away following then a fair amount of noise can be made from this stand. Refreshments are provided by the obligatory burger van. Bizarrely to get to this stand, away fans have to enter via turnstiles at the opposite end of the ground on Church Road and then walk along the side of the pitch to get to it! Normally a relaxed and friendly day out. Jonathan Gallagher informs me; ‘There is a really excellent facility at the back of the Main Stand, called the 1899 Sports and Social Club.  It’s got plenty of seats, shows Sky Sports across 5 or so screens, and there was even a live singer on when I went.  It opens a good few hours before the match and remains open afterwards too.  A pint in there was approx £3.70.  I would really recommend this option for those wanting a drink’. For some matches where a large away support is expected then beer is sold by the club out the back of a van near the visitors entrance. At Larne Town Railway Station there is the Station Bar, which doesn’t look much from the outside but is fine inside. Around halfway, if walking from the station and ground is the Chekkers Winebar on Lower Cross Street.

Follow the A8 into Larne. As you go downhill on the A8 and with a large block of flats visible in front of you, take the left-hand filter lane towards Pound Street. Then at the next traffic lights turn right onto the High Street. After passing under a large bridge that carries the A8 above, immediately turn right onto Inver Road. Follow Inver Road around to the left (or for the away entrance turn right into Church Road where there is some street parking) and up the hill. The main entrance to the ground is just around the bend on the right (look for the white walls on either side of the entrance). There is a small car park at the ground itself. Otherwise street parking.

Larne Town Railway Station is just under three-quarters of a mile away from Inver Park and is around a 15 minute walk. It is served by trains from Lanyon Place (previously called Belfast Central) and Belfast Great Victoria. However services can be infrequent on Saturdays and weekday evenings, so check well ahead. To get to the ground from the station, you need to walk straight out the station and through the car park and go left over the roundabout.  Keep walking along this road (the A2) as it goes beneath the dual carriageway, and it will curve round to the right.  You’ll pass a retail park on the left.  Keep walking straight up this road as it becomes Station Road.  At the end of the road (with the school on your left-hand side) cross into Inver Road. Away fans need to go straight along Church Road to reach their turnstile, whilst home fans follow Inver Road up the hill and round to the right.  The entrance to the ground is then on the right-hand side.

Map Showing The Location On Inver Park And Railway Station

If you require hotel accommodation in Larne then first try a hotel booking service provided by Booking.com. They offer all types of accommodation to suit all tastes and pockets from; Budget Hotels, Traditional Bed & Breakfast establishments to Five Star Hotels and Serviced Apartments. Plus their booking system is straightforward and easy to use. Just input the relevant dates and click on “Search” below or on the hotel of interest on the map to get more information. The map is centered on the football ground. However, you can drag the map around or click on +/- to reveal more hotels in the town centre or further afield.

If anything is incorrect or you have something to add then please e-mail me at: contact@footballgroundguide.com.

Be the first to leave a review of Larne! 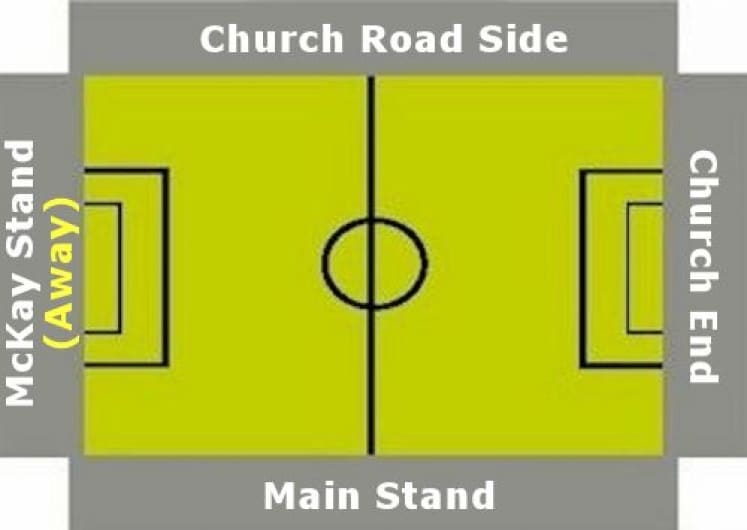