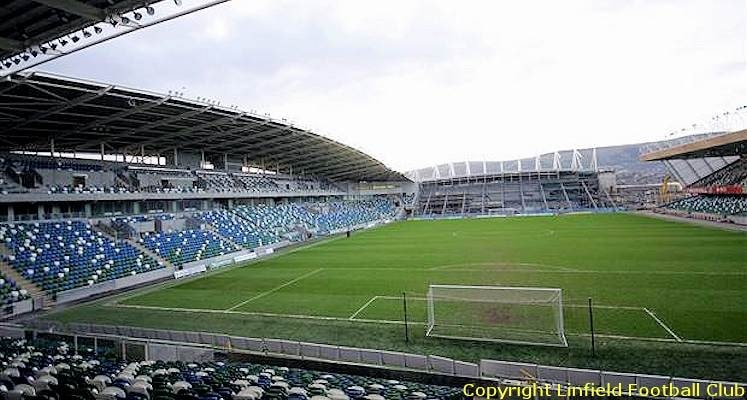 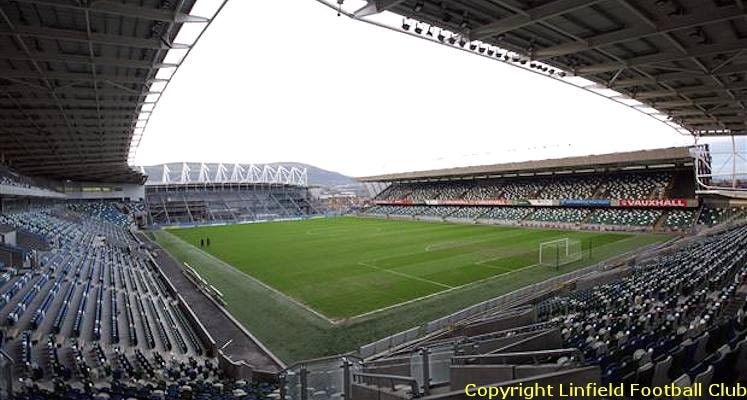 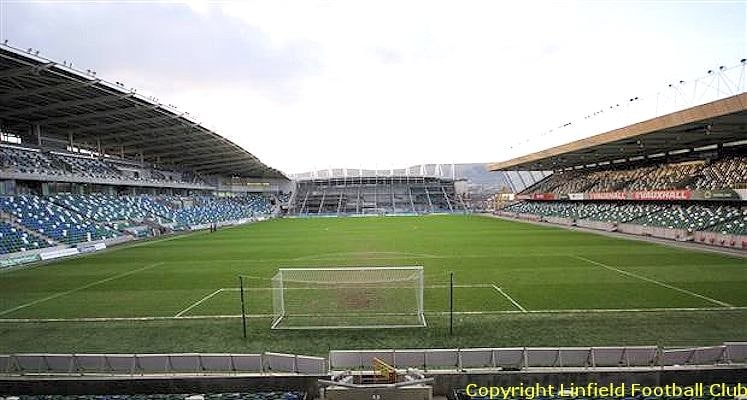 The National Football Stadium at Windsor Park as it is officially known has been transformed in recent years with new stands being built on three sides of the stadium. Only the North Stand on one side, remains of the old ground and even that stand has been refurbished and refitted.

The new East Stand at one end is single tiered and extends around one corner of the stadium to the South Stand. It is quite smart looking in terms of design, with quite a high back wall, between the seated area below and the roof above. There is also some corporate hospitality areas located at the very back of this stand. The new South Stand on one side is a much larger affair, being taller, two-tiered and having a more noticeable semi-circular roof. In-between the two tiers there is a row of corporate boxes.There is also a large display screen in the South East Corner. The last edition to the ground the West Stand was opened in 2017. This stand is single tiered and has a capacity of 3,400 seats.

The one older stand still remaining is on the North side. Built I believe it the late 1980's it is a covered all seated stand, which is two tiered and has a capacity of 6,862 seats. This stand is cantilevered meaning that fans enjoy unobstructed views across the playing area. This stand has undergone some refurbishment work and the seats have been replaced, with mostly green with a speckled white effect in the lower tier and in the upper tier, blue with the same effect. This seating effect has also been replicated in a similar way in the two new stands. To be honest I don't think this seating design looks very good at all. It seems as if someone has replaced all the seats with a single colour and then shaken their 'white paint brush over them'.

People arriving at the ground by foot from the nearby Adelaide railway station will arrive at a tall and wide, dark green painted footbridge, where a beautiful collection of murals depicting former Northern Ireland players and famous quotes from managers and commentators adorn the walls, inside and outside. Sadly this bridge is also graffiti strewn, and has a cage of steel which blocks the elevated view of the ground and the hills in the distance.

If anyone can provide me with updated photos of Windsor Park for use on this website then please email me at contact@footballgroundguide.com. Please note that I can only accept photos that have been taken by yourself or where you have the permission of the photographer for them to appear in this Guide.

Visitors are housed in part of the upper tier of the North Stand on one side of Windsor Park. The seating in this area offers an excellent unobstructed view of the pitch. However for Linfield games normally this stand is shared with home fans, albeit kept apart, whilst the other stands at the ground remain closed. Thus the average gate in the region of 2-2,500 fans, look out onto an empty stadium, which makes the experience a little surreal.

There are no pubs in the immediate vicinity of Windsor Park, however there are a number of food and drink shops within a short distance along Lisburn Road, and plenty to choose from in the city centre.

From Portadown, Dungannon and the South
Windsor Park is located approximately 1.5 miles south-west of Belfast city centre. Exit M1 at  Junction 1 and take the second exit on the A12 Westlink roundabout., into Glenmachan Street.Take a sharp turn left into Donegall Road, then turn right into Donegall Avenue, which runs alongside the railway line.

From Antrim, Ballymena and the North
Take the M2 to North Belfast.Turn off into the A12 Westlink Road. This road leads onto the M1 Junction 1.Take the first left exit on the Junction 1 Roundabout into Glenmachan Street, then turn left into Donegall Road, then turn right into Donegall Avenue, which runs alongside the railway line.

From Bangor and Newtonards
Take the A2 Sydenham Bypass into East Belfast. Follow onto the M3,as the road passes over the river Lagan, take a left turn and join the A12 West Link. This road leads onto the M1 Junction 1.Take the first left exit on the Junction 1 Roundabout into Glenmachan Street, then  turn left into Donegall Road, then turn right into Donegall Avenue, which runs alongside the railway line.

Car Parking
The ground has a large car park to the rear of the West Stand, parking around the ground is residential, although there is a number of large industrial estates and retail parks to the south of the ground which has plenty of car parking spaces.

There are a number of Railway stations to the south of Belfast, all within 20 minutes walk of the ground. These are Belfast Central, City Hospital, Botanic and Great Victoria Street, with Adelaide Station being 2 minutes walk south of the ground. All slow train services from Portadown and Bangor stop at these stations, however the Enterprise Service from Belfast Central to Dublin Connolly only stop at Botanic.

Arriving At Victoria Street Railway Station/Europa Bus Station
The ground is around 20-30 minutes walk south of the station, however, for those that would like to visit Belfast City Centre before the game, when you come out of the bus station concourse/retail shops turn left, pass the opera house, and take a right turn into Howard Street. This will lead you towards City Hall and the shops and restaurants in the heart of the City.

There is not a direct service from the city centre to the ground, however Metro Bus 9 operates from Donegall Square East, next to Belfast City Hall. This bus runs along Lisburn Road with regular stops.If you sit on the bus upper deck and look out to the right hand side this will give you a good idea of when you are getting closer to the ground. Depart the bus as close as possible to Lower Windsor Avenue then take a 2 minute walk along to the end of the road, pass over the railway footbridge and
into the ground.

Directions To The Stadium From Great Victoria Street Railway Station/Europa Bus Station
Exit the bus station concourse/retail shops and turn right, following the Great Victoria Street Road. At the Bradbury Place junction take a right turn into the A1 Lisburn Road. Follow this road and take a right turn into Lower Windsor Avenue. The ground is visible at the far end of the road. Once at the end of the road, cross the railway footbridge. The ground is directly ahead.

Directions To The Stadium From Adelaide Railway Station
Adelaide Railway Halt is a 2 minute walk south of the ground. This can be reached by catching the Portadown/Newry slow train from Central Station, Botanic,City Hospital or Great Victoria Street stations. Once at Adelaide Halt turn left and a two minute walk will take you to the railway footbridge and into the ground.

Linfields's biggest rivalry is with East Belfast club Glentoran. But there is also rivalry with Crusaders and Cliftonville from North Belfast.

Map Showing The Location Of Windsor Park In Belfast

Special thanks to Linfield FC for providing the photos of Windsor Park, Belfast. 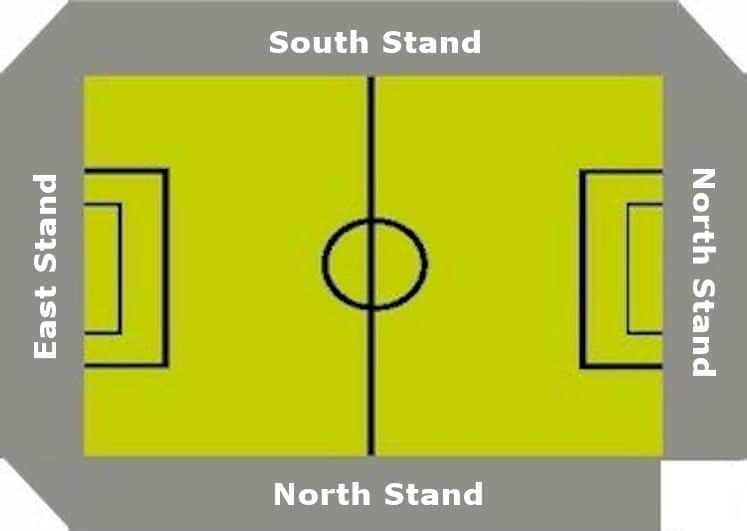