The stadium is dominated by the large South Stand at one end. Almost twice the height of the other stands, it is two tiered with a row of executive boxes running across the middle and has a capacity of 4,500. Opposite, the Davie Cooper Stand, is a small covered seated stand. The single tiered Phil O'Donnell Stand on one side of the ground, is both raised above pitch level and set back from it. This older stand has windshields to either side as well as a few supporting pillars. It is unusual in that the stand itself doesn't run the full length of the pitch, but the supporting steelwork does, making for an odd looking sight. According to Simon Inglis in his book 'The Football Grounds Of Great Britain', this was because it was originally intended in 1962 to build a full length stand but due to a dispute with a an owner of a house beyond the corner of that ground (a dispute which the club lost) it was never completed as intended. This stand was funded chiefly from the sale at that time of Ian St John & Pat Quinn to Liverpool. This did not go down well with the fans as many subsequently boycotted the stand and to this day it is the most sparsely populated section of the ground. Opposite is the smaller East Stand, which also has a number of supporting pillars, running across it. This originally was a covered terrace, but was made all seated in 1990.

Away fans are housed in the South Stand at one end of the pitch. Normally only the lower tier is opened for away fans, but if demand requires it, then the upper tier can be opened also. Up to 4,500 fans can be accommodated in the two tiers. The view of the playing action from this stand is pretty good, as well as the facilities. David Tennant a visiting St Mirren supporter adds; 'Overall Fir Park is a good day out. The huge away stand was very nice to be in and the atmosphere was alright. No hassle around the ground, but some good banter was had with the home support.

Craig Barry recommends the 'Jack Daniels Bar, which is the closest to the ground. It is popular with both home and away fans, each having their own bar'. Whilst Craig Irving adds; 'The Fir Park Social Club is on same road as the ground and is an extremely friendly boozer. Away fans are normally admitted, although restrictions may be put in place for Old Firm games'.

Leave the M74 at Junction 6 and head towards Motherwell. At the first set of lights that you come to turn right onto the B754 (Airbles Road) towards Wishaw. The ground is at the end of this road on the right. Street parking.

Airbles Railway Station is the closest to Fir Park, but is only served by a local service. You are more likely to end up instead at Motherwell Central station, which is around a 15 minute walk away from the ground.

Alan McAulay adds; 'You exit the train station facing the main shopping street in the direction of the ground; go straight along it through the shopping precinct/centre; past the shopping centre car park, which leads to an underpass; go under the underpass, up the stairs and turn left; go straight on and the large stand gradually comes into view from behind Wilsons Furniture Store. The road 'forks' at this point with away fans, and those going into the old seated terrace going to the left and all other fans to the right. Away fans walking from Motherwell should note, that the road to the away end is a long and winding one (you think you're there when you see the stand, but it takes about another 5 minutes to access it), so should allow plenty of time. There is also a pretty good pub right next to Motherwell Central, but fans should remember to leave on time, the last time I was in Motherwell I missed the first ten minutes!'

Admission prices vary in accordance with the category of the match. Category A (Premium) prices are shown here with category B (Standard) prices in brackets.

Concessions apply to over 60's, Under 18's and full-time students. Juveniles are classed as under 16's.

Motherwell Hotels - Find and Book Yours And Help Support This Website

If you require hotel accommodation in Motherwell or Glasgow then first try a hotel booking service provided by Booking.com. They offer all types of accommodation to suit all tastes and pockets from; Budget Hotels, Traditional Bed & Breakfast establishments to Five Star Hotels and Serviced Apartments. Plus their booking system is straightforward and easy to use. Yes this site will earn a small commission if you book through them, but it will help towards the running costs of keeping this Guide going.

Be the first to provide a visiting fans review of Fir Park.

Hotels and Guest House in Motherwell and Glasgow

Map Showing The Location Of Fir Park In Motherwell

Special thnaks to Owen Pavey for providing the layout diagram and to Jean-Francois Foxhal, for some photos of Fir Park Motherwell. 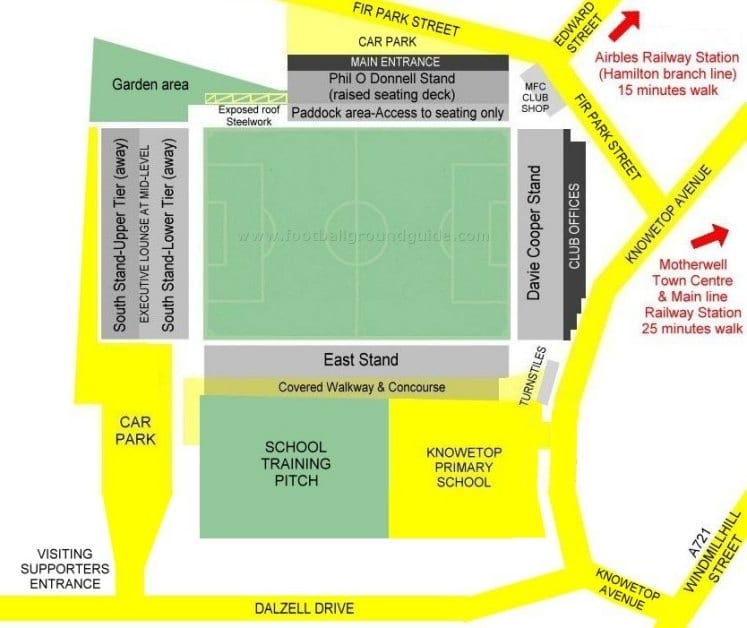