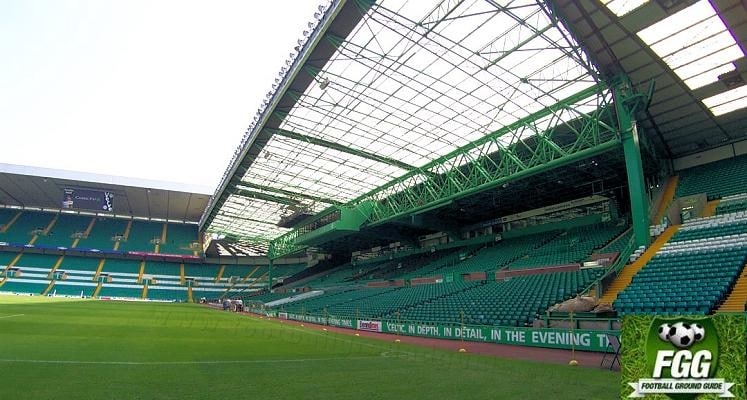 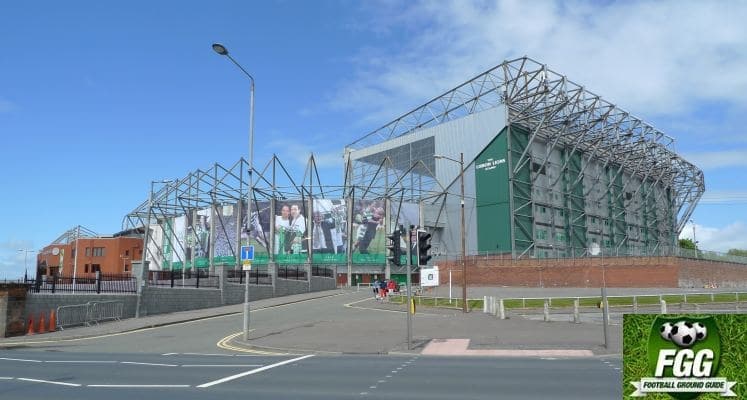 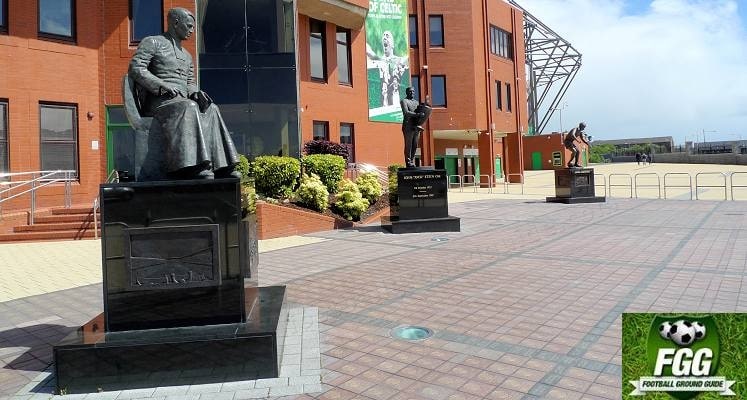 Celtic Park (although known to many fans by the name of the Parkhead area in which it is situated) is simply a massive stadium that can be seen from miles around. Three quarters of the ground have been re-developed over the years greatly improving the overall look. The ground is totally enclosed, with the three new sides being two tiered. The lower tiers of these stands are huge and come up to roughly the same height as the older Main (South) Stand which is also two tiered, just showing how large they are. The upper tiers of the new North Stand does have a few supporting pillars, which may obstruct your view (the club do however issue reduced price tickets for those seats effected). The Main Stand is unusual as it has a large roof, most of which is translucent, which makes it look quite striking. The translucency helps keep the pitch in good condition. A television gantry is also suspended from beneath its roof. However with the Main Stand being far smaller then the other sides, the ground looks a little unbalanced. Still if this was to be re-developed at some point in the future then I'm sure Celtic Park would be in the running for the best club ground in Britain. However, I understand that this may be sometime off as the Main Stand is a listed building. There are also two large video screens suspended from beneath the roof at either end of the ground. The quality of the image shown on these screens are superb. Another unusual aspect of the ground is that it has a number of seats that can be heated in cold weather.

Outside the main entrance are three statues; Jock Stein (former Manager), Jimmy Johnstone (Former player) and Brother Walfrid who founder the Club in 1888. In December 2015 a fourth statue was unveiled of former player and club manager; Billy McNeill. Billy is shown holding the European Cup aloft.

In the Summer of 2016 a new safe standing area was introduced into Celtic Park. Located in one corner in-between the Lisbon Lions and North Stands, in can accommodate 2,600 fans (see below for more information).

Celtic have become the first major club in the country to introduce a 'safe standing' area at Celtic Park. Based on the rail seating system  used at some Bundesliga stadiums, then an area has been created in the lower tier of the North East corner of the stadium. This area which can accommodate 2,600 fans, has both seats and stanchions running across each row. For domestic games the seats will be locked back out of the way and fans will be able to stand and use the stanchions (rails) to lean against if they so wish. For European games where there is a requirement for fans to sit, then the seats can be unlocked for use. If this safe standing area proves to be successful, then many more Clubs will wish to follow suit, as it allows them to relatively easily and cheaply increase the ground capacity, as the standing areas normally accommodate more fans than if they were all seated. Plus it is hoped that by allowing fans to stand, it will boost the atmosphere generated within the stadium and improve the overall matchday experience for supporters.

Away fans are housed in the lower corner of the Lisbon Lions Stand at one end of the ground. The views of the playing action and the facilities provided within this stand are adequate, although it should be noted that there are a number of restricted view seats in the away section, for which the club charge a lower admission fee. There are also betting facilities available within the ground. The atmosphere within Celtic Park is normally superb and it is a great stadium to watch football in.

As would be expected most bars around the Parkhead area, are partisan & particularly busy. It is probably best to drink in the city centre beforehand. However most of these bars will not serve fans wearing football colours.

The ground is on the East side of Glasgow on the A74 (London Road).

Leave the M74 at Junction 2A (signposted A74 Tollcross/Rutherglen). At the bottom of the slip road at the roundabout turn right towards Tollcross A74. You will then reach a set of traffic lights (with a McDonalds on the right hand side) where you bear left onto the A74 towards Glasgow City Centre. After just under two miles you will reach Celtic Park on your right hand side.

From The North and East

Leave the M8 at Junction 8 and follow the M73 South towards Carlisle. At the end of the M73 join the M74 northbound towards Glasgow. Leave the M74 at Junction 2A then from as South above.

There is plenty of street parking to be had, especially in the side streets off the London Road going down towards the A74. Don't be surprised though, as you get out of your car, that some kid appears uttering the words 'mind yer car mister?' There is also the option of renting a private driveway near Celtic Park via YourParkingSpace.co.uk.

Glasgow Central and Queens Street railway stations are around a 30 minute walk away from the ground. Probably best to jump in a taxi (about £5). Otherwise if you arrive at Glasgow Central you can take a local train to Dalmarnock Station. As you come out of the station turn left and then turn right at the traffic lights (signposted Parkhead A728). You should be able to see Celtic Park straight ahead in the distance. Just keep straight on along this road and you will reach Celtic Park after around a 15 minute walk.

In addition, there are a number of 'restricted view' tickets available, which are £3 cheaper (except Under 13's), then the price quoted above.

Official Programme £3
Not The View Fanzine £2.50

There are six wheelchair spaces made available to away fans in the North & East Stands. Wheelchair users are charged £8, which includes the admittance of one helper. Places must be booked in advance with the Club on 0141 551-4311. Thanks to Steve Mates for providing the photo above of the Billy McNeill Statue.

The Club offer regular daily tours of the stadium, including matchdays (although 3pm kick off games on Saturdays and Sundays, have tours taking place only in the mornings, with no access to the dressing rooms). The tours cost:

Map Showing The Location Of Celtic Park In Glasgow

Special thanks to Owen Pavey for supplying the layout diagram of Celtic Park.