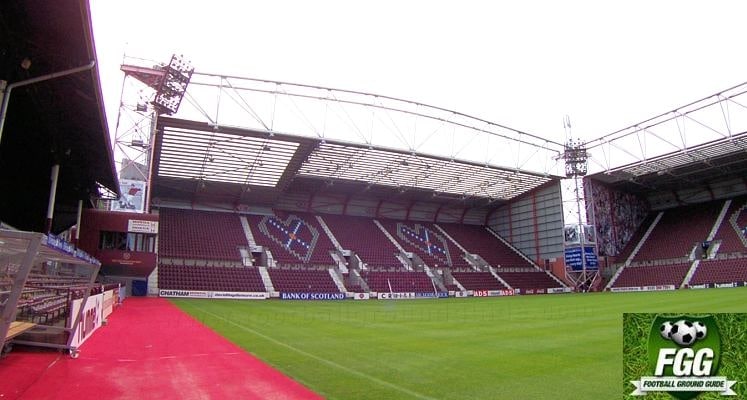 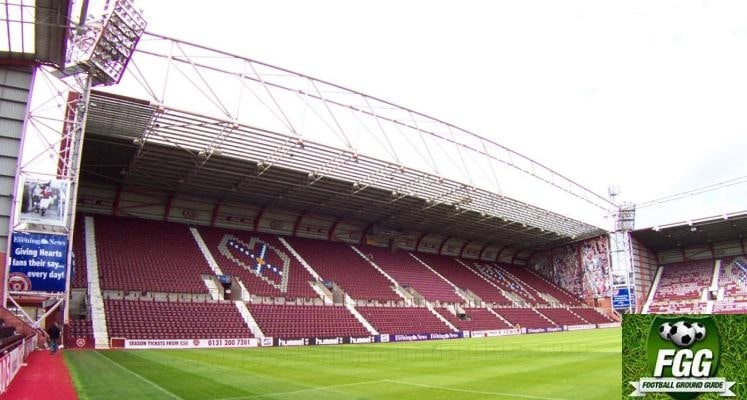 With the opening of the new Main Stand on one side of the pitch, then Tynecastle Stadium has been completely re-developed since the 1990's. Opened in November 2017 the Main Stand is an impressive size, with a capacity of over 7,000 seats. Effectively a large single tier, its roof is mostly transparent to allow more light to reach the pitch. There is a wide players tunnel located at the half way line, with the team dugouts located wither side of it, out front. The rest of the stadium comprising the Roseburn, Gorgie and Wheatfield Stands, are all good sized single tiered stands, that are similar in design and height. They are slightly taller than the Main Stand. The corners of the stadium are open meaning that the stands are separate. Apart from a line of floodlights running along the front of the roof, then in each corner, there is a block of floodlights mounted which give it an interesting look.

The Club have at last been able to announce that they are to return to Tynecastle as the new Main Stand can now be used for matches. The Club will play at home for the first time this season against Partick Thistle on November November. The new Main Stand will have a capacity of 7,196 seats, which will increase the overall capacity of Tynecastle to over 20,000.

George Hobb informs me; 'The Jessie Mays bar to the west of the stadium (heading away from the city centre) always has a warm welcome for away fans. Has also the Ryries Bar, which is a good pub which is within ten minutes walking distance of Tynecastle, being located next to Haymarket Railway Station.'

George continues; 'Any visitors who like their real ale, should of course visit the legendary Athletic Arms on Angle Park Terrace. The pub is nicknamed the 'Diggers' as it overlooks a graveyard and serves great beer (it is has been listed in the CAMRA Good Beer Guide for many years). For neutral fans then the Tynecastle Arms on Gorgie Road is worth a visit as it has lots of Hearts memorabilia on display. As you would expect it gets very busy on match days, so get there early.'

Closer to the stadium on Angle Park Terrace, is the Caley Sample Room, which also serves real ale and is busy on matchdays.

Away fans are housed in the Roseburn Stand at one end of the ground, where up to 3,676 supporters can be accommodated. Clubs with a small following may find that a smaller portion of this stand is allocated. The steep slope of the stand ensures a good view of the pitch and the facilities on offer are good. Apart from the Old Firm games and local derbies against Hibs, the atmosphere can be lacking.

Follow the M8 towards Edinburgh. At the end of the M8 take the A720 (Edinburgh By Pass) southwards towards Dalkeith. Leave the A720 at the junction with the A71 and follow the A71 into Edinburgh. You will eventually reach the ground on your left. Street parking.

The nearest train station is Edinburgh Haymarket, which is about a 15 minute walk away from Tynecastle Stadium. You can see the ground as you come into the station. On leaving the station turn right at the Ryries pub, into Dalry Road. Dalry Road runs into Gorgie Road. About one mile on and the ground is visible from the first major road junction/set of traffic lights.

The club operate a category system for matches (A & B), so that admission prices are varied dependant on which club is being played. Category A prices (for games against Hibernian and Rangers) are shown below, whilst Category B match prices (for all other league games) are shown in brackets:

Concessions apply to over 65's and students in full time education.

A number of wheelchair spaces are available along the walkways of the Gorgie, Roseburn & Wheatfield Stands. These also include provision for one helper per wheelchair space. Disabled fans are admitted free, although helpers are required to pay (Category A Matches £15, other matches £10). Access to these stands is via lifts situated in the Gorgie & Roseburn Stands.

A limited number of seats for ambulant supporters are made available in the Main Stand which cost £15 for Category matches and £10 for other matches.

Located inside the Gorgie Stand is the Club Museum, which depicts the history of the Club and Tynecastle Stadium. Entrance is free. It is open Thursday, Friday and Saturday (excluding matchdays) between 10am and 4pm. It is also open on Sundays between 12 noon and 4pm.

The Club run weekly tours on most Thursdays and Fridays and monthly on a Saturday day time and Thursday evening. Tours cost Adults £9, Concessions £6, Under 16's £5. There is also a family ticket available (2 Adults + 2 Under 16's) £22. Tours should be booked in advance by calling emailing the Club.

Find And Book Hotels In Edinburgh

Map Showing The Location Of Tynecastle Stadium In Edinburgh

Special thanks to Owen Pavey for providing the layout diagram of Tynecastle Stadium and to Alex Manners and David Chapell for the photos of the new Main Stand.