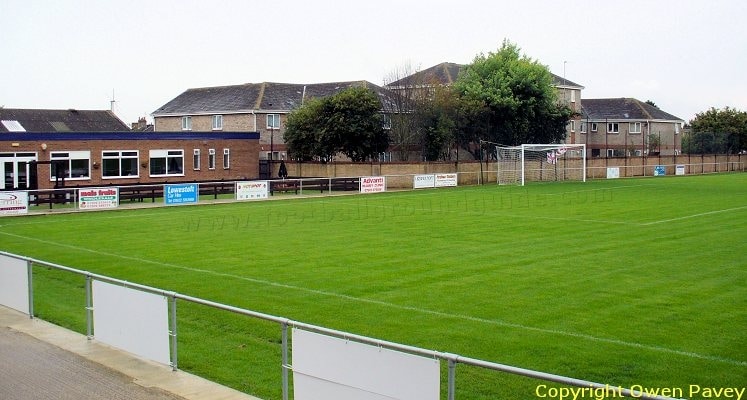 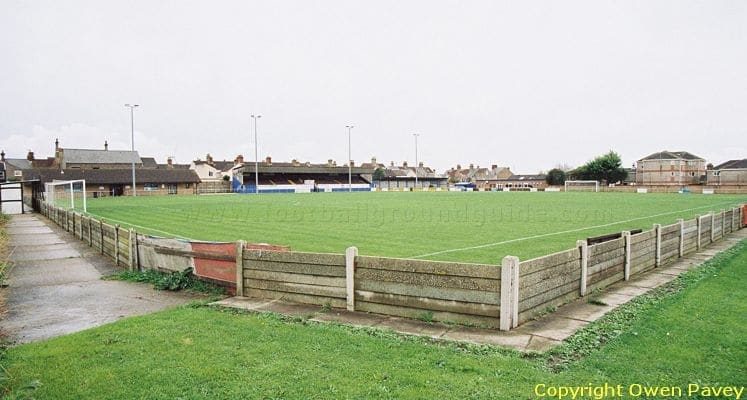 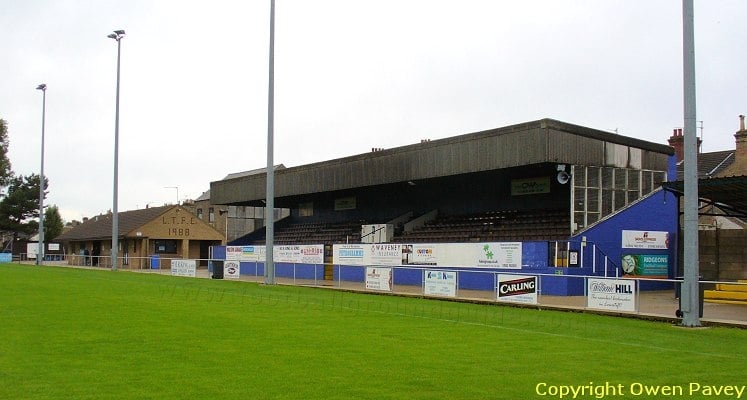 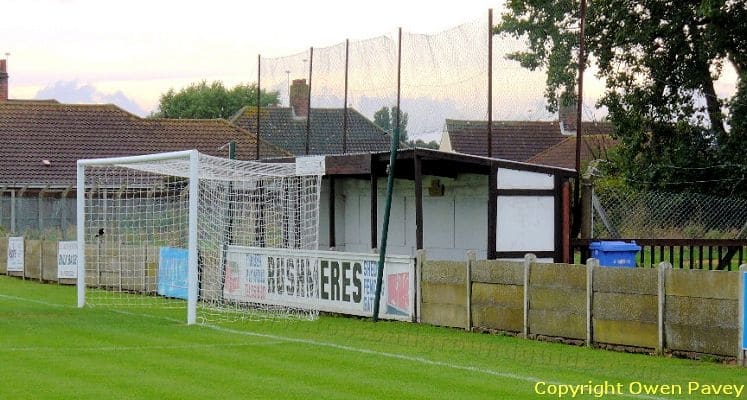 The ground is largely an open one, with three sides being open standing areas. On the one developed side  is the Main Stand. This covered all seated stand, has its seating area raised above pitch level, meaning that spectators have to climb a set of stairs to access it. Although, it is a simple looking structure, that looks dated, it is free of supporting pillars. However in front of that stand that could effect your view, is the base of one of the four floodlight pylons that run down the side of the pitch. The Main Stand doesn’t run for the full length of the pitch, being around half the length in size. The stand straddles the half way line, with a separate structure located on one side, that houses the teams changing rooms and a small covered terrace on the other. The Main Stand which also has windshields on either side, has a capacity of 466 seats.

Surprisingly the team dug outs are not located in front of the Main Stand, but on the opposite side. This leads to a procession of players and staff at half and full time, returning to the dressing rooms. At the North End of the ground there is a small covered wooden structure, that sits directly behind the goal. This is so small that the height of it is lower than the crossbar of the goal in front and probably could only house about a dozen people. As the ground is mostly open, a number of houses and flats are visible behind the stadium perimeter.

Lowestoft Town current plays in the BetVictor Southern League Premier Division South. This is at Step 3 below the Football League and one League below the National Leagues North and South.

Lowestoft is a welcoming club and you should have no problems there. Hardly ever are fans segregated at Crown Meadow and that tells a lot about the Club. The ground itself is very near to the town centre, which means that there are plenty of pubs and fish & chip shops to keep you happy. Its central location does mean that the ground seems quite ‘squashed’ in-between residential houses, but I am sure when the ground was first opened that there would have been few houses around then. As a trip to Lowestoft is normally quite a lengthy one, due to its geographical location, why not make a weekend of it?

At the South End of the ground is a Social Club, which welcomes away fans, whilst nearby in Love Street, just down from the Club Entrance is Fieldy’s pub. Whilst a few minutes walk away on Stanford Street is the CAMRA Good Beer Guide listed Stanford Arms. The town centre is only around a ten minute walk from the town centre, where there are a number of other pubs to choose from. Also in the CAMRA Good Beer Guide is the Triangle Tavern on St Peter’s Street, which among others serves beers from the local Green Jack Brewery. Whilst on Station Square near the railway station is a Wetherspoons Pub called the Joseph Conrad.

From the North and Midlands
Take the A14 to Bury St Edmunds, then just on the other side of Bury St Edmunds leave the A14 and take the A143 towards Diss. At the end of the A143 you will reach a roundabout, were you join the A146 towards Lowestoft. After passing Oulton Broad South railway station on your left you will reach a roundabout, where you take the first exit onto the A1117 (signposted Oulton Broad). Go straight across the next two roundabouts and at the third roundabout, take the third exit towards the Town Centre (A1144). At the next roundabout continue straight on towards the town centre, but after passing the roudabout turn immediately right into Minden Road. At the mini roundabout take the first exit onto Love Street. The entrance to the ground is down on the left. There is little parking available at the ground itself, but there is plenty of street parking on the surrounding roads.

Lowestoft Railway Station is located around a half a mile away from the Crown Meadow Ground and is around a ten minute walk. The station is served by trains from Ipswich and Norwich which is a 45 minute train ride away.

As you come out of the main railway station entrance turn left and then take the next right into Katwiljk Way (sign posted Great Yarmouth). On reaching a roundabout take the first exit and then immediately turn right onto Raglan Street. After passing on the left the offices of the Hoseasons Group, take the next left at the crossroads into Love Road. After passing the Havelock Pub on your left, the entrance to the ground is a little further up on the right hand side.

If you require hotel accommodation in Lowestoft then first try a hotel booking service provided by Booking.com. They offer all types of accommodation to suit all tastes and pockets from; Budget Hotels, Traditional Bed & Breakfast establishments to Five Star Hotels and Serviced Apartments. Plus their booking system is straightforward and easy to use. Just input the relevant dates and click on “Search” below or on the hotel of interest on the map to get more information. The map is centered on the football ground. However, you can drag the map around or click on +/- to reveal more hotels in the town centre or further afield.

Special thanks to Owen Pavey for providing photos of the Crown Meadow football ground for this Guide.

Be the first to leave a review of Lowestoft Town!