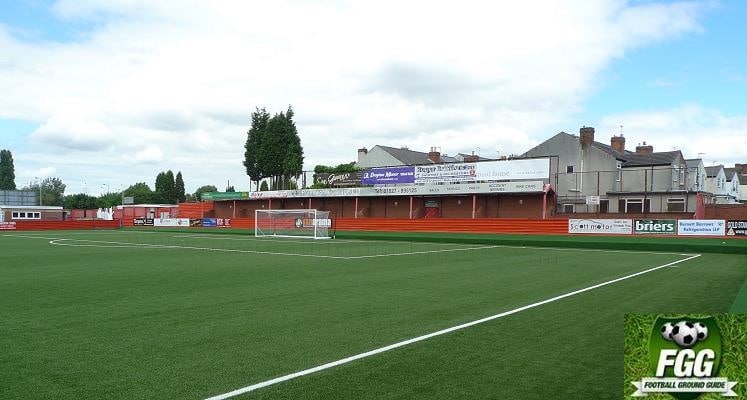 From the outside the Lamb Ground looks uninspiring. However inside you appreciate that it is well maintained and that it has a certain charm about it. The Main Stand is the most recent addition to the ground, being opened in 1996. It is a tidy little all seated covered stand that straddles the halfway line of the pitch. It has a capacity of 518 seats. The other side is a small covered terrace, known by the fans as ‘The Shed’ which runs nearly the full length of the pitch. This terrace is home to the ‘The Shed Choir’ (in reference to the Tamworth fans who sing in this stand). On its roof is a television gantry, complete with a large model owl to help deter the presence of other birds. The Castle End is an open terrace, whilst the other end is a partly covered terrace (to the rear). This end, the Meadow Street End, is given to away supporters. The pitch has a slope running up from the Castle End to the Meadow Street Terrace. The ground is overlooked in one corner by the sizeable Tamworth Snowdome. It gets its unusual name from a former public house called the Lamb Inn that used to be situated near to the entrance to the club car park.

During the Summer of 2016, a new artificial 3G playing surface was installed at the Lamb Ground. Pleasing as part of this development, the pitch which used to have quite a pronounced slop running down the Meadow Street End to the Castle End has been largely levelled out. This should make for better games of football.

If fans are segregated, then away supporters are mostly housed in the Meadow End where around 850 supporters can be accommodated. This small terrace is partly covered and also comprises some flat standing areas. The good thing is that the fans are situated close to the playing action. The facilities are okay and refreshments are provided by the obligatory burger van. In addition to the terrace around 90 seats are made available to away supporters in the Main Stand. For teams with a larger following then in addition half the ‘Shed’ terrace can also be allocated.

If segregation is in force then catering is provided by a Burger Van, which is situated inside by the turnstiles. It offers amongst other things; 1/2 Pound Cheeseburger (£5), 1/4 Pounder Beefburger (£3.50), Hot Dogs (£3.50), Bacon Baps (£3.50) and Chips (£2). If there is no segregation then you can access the Club Catering which is located next to the Clubhouse. This has a similar offering plus a range of Pies (£2.50), plus Pie, Chips and Gravy (£4).

Over the years I have attended a number of games at the Lamb, as Tamworth is fairly local to where I live. I have always been impressed with the good atmosphere at the games that I have been to. The small covered stands allow a lot of noise to be generated and this is taken advantage of by the supporters of both sides.

Inside the Lamb Ground there is a fair sized club house, which serves real ale. This is open to all fans, unless segregation is in force, when then it is only available to home supporters. The Club’s main catering outlet is conveniently situated near its entrance and always seems to do a brisk trade throughout the game.

There are no pubs nearby, so it is a case of getting there early and taking the 10-15 minute walk into town, where there are plenty of pubs to be found. There is a Wetherspoons pub called the Bole Bridge,  however on match days the pub operates a no football colours/shirts policy and is for home fans only. A better bet would be either the Market Vaults on Market Street, the Sir Robert Peel pub on Lower Gungate or further up the same road on the same side as the Sir Robert Peel, is a small micropub called the King’s Ditch. All these three pubs are included in the CAMRA Good Beer Guide, with both the King’s Ditch and Market Vaults stocking an impressive number of real ciders and perries.

To walk in the direction of the town centre, simply come out of The Lamb car park entrance at the ground and turn left. Before you get to the main road turn left along a path way and down to an underpass. Go through the underpass and out the other side an through another underpass. Then bear right and then up the pathway alongside the main road. Go straight on along this road passing a garage on your right and an Odeon Cinema on your left and you will reach the town centre in front of you.

Leave the M42 at Junction 10 and take the A5 towards Tamworth. Follow the A5 bypass into the town and take the turn for the town centre. Follow the signs towards the Snow Dome and Glascote/Amington. After passing the Snow Dome on your left, you should see the ground on your right. There is a fair sized car park at the ground, which costs £2 for cars, £5 minibuses and £10 for coaches. otherwise street parking.

Tamworth Railway Station is around a 10-15 minute walk away from the Lamb ground. Sited at an intersection of two major rail lines, it is well served by trains from Birmingham New Street, Crewe and London Euston.

Exit the station and walk down the station approach to the traffic island in front of it. Turn left along Saxon Drive and continue to follow it, bearing round to the left at the next roundabout, which takes you over the river. Turn left into Amington Road, cross the road and cross over the grassed area. Cross Glascote Road close to the railway viaduct. Go straight on into Kettlebrook Road and the ground is on the right.

Thanks to Brian Scott for providing the directions.

At the turnstiles inform the operator that you wish to sit in the Main Stand and he will charge you an additional £2 per Adult or  Concession. He will then stamp the back of your matchday ticket, which you then show inside the ground to gain admittance to the Main Stand.

Tamworth Hotels - Find and Book Yours And Help Support This Website

If you require hotel accommodation in Tamworth or Birmingham then first try a hotel booking service provided by Booking.com. They offer all types of accommodation to suit all tastes and pockets from; Budget Hotels, Traditional Bed & Breakfast establishments to Five Star Hotels and Serviced Apartments. Plus their booking system is straightforward and easy to use. Just input the relevant dates and click on “Search” below or on the hotel of interest on the map to get more information. The map is centered on the football ground. However, you can drag the map around or click on +/- to reveal more hotels in the town centre or further afield.

Map Showing The Location Of The Lamb Ground, Railway Station and Listed Pubs