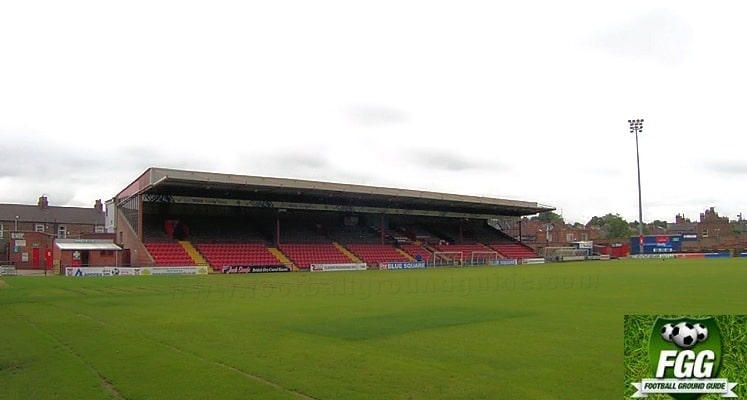 Bootham Crescent hasn’t seen any major investment for a number of years now, which has resulted in it looking a little tired in places. However it does have character, something that a lot of newer stadiums lack. On one side of the ground is the York Pullman Main Stand. As you would expect it is the tallest stand at the ground, but only runs for around two thirds of the length of the pitch, with open corners to either side (one of which houses the supporters club). It is a covered all seated stand and to the rear it has windshields to either side. It also has a number of supporting pillars running across the middle.

Opposite is the Benenden Popular Stand. This is a simple affair, being small and covered. It too has a number of supporting pillars this time running across the front. On its roof is a rather basic looking television gantry. At one end is the David Longhurst Stand, which is a fair sized covered terrace, which has a row of supporting pillars across its front. Opposite is the open terraced Prostate Cancer UK Stand, reserved for away supporters. The ground is completed with a set four modern looking floodlight pylons. Bootham Crescent is shared with York City Knights Rugby League Club.

With the Club due to move to a new stadium (see below) now likely to happen in January 2020, then don’t miss the chance to visit this traditional ground, situated close to the City Centre, before the bulldozers move in.

After having a number of delays to works surrounding the new York Community Stadium,  it is now expected to open early in 2020, possibly at the end of February. The building of the 8,112 capacity all seated stadium at Monks Cross, which is located just over four miles away from the centre of York, is part of a larger development, including a cinema and leisure complex with swimming pool. It is believed that delays in the building of the nearby leisure centre has delayed the stadium opening. The Buckingham Group are the building contractors for the stadium and this company were also responsible amongst others for the building of the Amex Stadium in Brighton and Stadium MK in Milton Keynes.  The new stadium, which is to be called the LNER Stadium, after a corporate sponsorship with a local rail operator,  will also be home to both York City Football Club and York Knights Rugby League Club. The photo above is courtesy of the YorkMix website where more photos of the new stadium can be found.

Away fans are placed in the Prostate Cancer UK Stand, where just under 1,800 fans can be accommodated on an open terrace. A further 300 seats are made available to away supporters in the Popular Stand, which unlike the open terrace is at least covered. After paying to enter the terrace and going through a line of stewards who seemed on my visit to be searching most fans going in, you can then pay a £1 transfer fee to go into the seated area. Away fans in both the seats and terracing share the same refreshment kiosk and toilets. The latter for men seem to have been there since the ground opened. The urinals are open air and are of the ‘stand up against a brick wall variety’, whilst women have a portable toilet block affair. On my last visit the refreshment kiosk was doing a brisk trade of meat pies (£3) & mushy peas served in a tray. On the whole I found York to be friendly and the supporters get behind their team well, making for a good atmosphere.

Daniel Scullane a visiting Bath City fan adds; ‘The atmosphere was quite sedate on my last visit. Maybe it is something to do with the fact that away fans are extremely isolated inside. The layout of the ground is such that the away fans are about 30 yards from the nearest home fans on the popular side, and the grandstand is split from the away fans by about half the pitch. Still an enoyable visit made all the better by a cracking night out on the town afterwards!’

There is a supporters club called the Pitchside Bar, which is situated on one corner of the ground, that overlooks the away end. When I went they were quite happy to allow away supporters in and there was some pleasant banter going on between both sets of fans. The Club serves up to four real ales (normally from local micro breweries) and also has Sky Sports television. Otherwise the nearest pub is the Burton Stone Inn which you should see on the A19 as you near the ground. On my last visit this was very popular with away fans. Going back down the A19 (away from the city centre) on the left there is another pub called the ‘Old Grey Mare’ which sells Theakstons and was a lot quieter. More or less opposite to this pub (on the other side of the road) is a sandwich shop which sells hot pies for a bargain price.

If you have a bit of time on your hands and you like real ale then it may be advisable to embark on a 15 minute stroll up the A19 and into York City Centre. If at the top of the A19 you proceed through the old Bootham Bar (Gate) into the old town you will quickly reach on your right a York Brewery outlet called the ‘Three Legged Mare’ (known by the locals as the ‘Wonkey donkey’). Although a small modern bar it has a great range of real ales on offer, plus a selection of continental bottled beers. Joe adds; ‘There is also the ‘Hole in the wall’ pub just before you reach the Three Legged Mare on the opposite side and their food comes highly recommended. Alternatively before you get to Bootham Bar/Gate turn left on to Gillygate, where there is Wackers fish and chip restaurant, which has won a number of awards’.

Roger Marshall adds; ‘If arriving at York Railway Station, then there is a Craft Beer pub opened at the station which is called the York Tap.’ See the York Tap website for more information.

A1 From The South

Take the A64 to Scarborough and York. When you near York, join the A1237 Ring Road and continue on it until you reach the junction with the A19. Turn right at the junction and take the A19 towards York City Centre and keep going until you get to a pub on your left called the Burton Stone Inn, at which point you turn left into Burton Stone Lane. Then take the first right into Grosvenor Road for the ground.

A1 From the North

Take the A19 and follow the directions as above.

If you arrive early enough then there is street parking to be found in a number of side roads off Burton Stone Lane. Otherwise you may have to travel a further distance away from the ground as there are a number of residents only parking schemes in operation in the general area, or you could seek out a pay and display car park in the city centre and walk back out to the ground.

The Club have agreed that on Saturday afternoons (1-6pm) supporters can park at the nearby York Hospital for £2.50. To download the necessary parking voucher for the hospital and for terms and conditions please visit the York City website.

York mainline railway station is a good 20 minute walk away from the ground. People intent on using a taxi should be aware that Saturday traffic in York is best avoided. Walking route from York station thanks to Ninety-Two Club member Dave Dansie: From the car park attached to the station (there is no need to go through main station exit), take the new pedestrian footpath that emerges close to the Post Office building. Turn left, turn left again when you reach the river and cross the Ouse on the footbridge alongside the York-Scarborough railway line. Once over the bridge, turn left at the Abbey Guest House into Marygate car park and follow the footpath, the railway is to your left. At the far end of the car park, the footpath goes under the railway, turn right into Bootham Terrace (beware traffic!) and walk up the rise to the main road. Turn left, cross the road and Bootham Crescent is the first turning on the right. There is a newsagent’s shop on this corner. This journey is not recommended for wheelchair users as there are steps at both ends of the Ouse bridge.

Scenic route: Leave the station and turn Left. Follow the City Walls on your right until you go under them and then continue to follow with them on your left. When they stop, cross the river and continue ahead until the traffic lights (York Minster ahead). Turn left into St Leonards place and follow until the next traffic lights (Art Gallery on left). Turn left and you are on Bootham (A19) Follow this for about a third of a mile passing on your right The Exhibition and Bootham tavern pubs then lots of big Edwardian terraces. Bootham Crescent will appear on your right with a Zebra at the top of it’.

Concessions include under 16’s, over 65’s and students with proof of education status.

* Family area tickets must be purchased from the ticket office prior to the match.
** Supporters pay to enter the terrace then pay an additional £1 transfer within the ground to access the Popular Side seating area.

Scarborough were the real rivals, but since their fall from grace, you can now take your pick from Doncaster, Bradford or Leeds! Carrying on from non-league days there is still a rivalry with Luton Town.

York is a popular tourist attraction, having a lot of historical sites, including York Minster Cathedral which is a spectacular sight. The night life is also pretty good, so I would definitely recommend it for a weekend stopover.

If you require hotel accommodation in York then first try a hotel booking service provided by Booking.com. They offer all types of accommodation to suit all tastes and pockets from; Budget Hotels, Traditional Bed & Breakfast establishments to Five Star Hotels and Serviced Apartments. Plus their booking system is straightforward and easy to use. Yes this site will earn a small commission if you book through them, but it will help towards the running costs of keeping this Guide going.