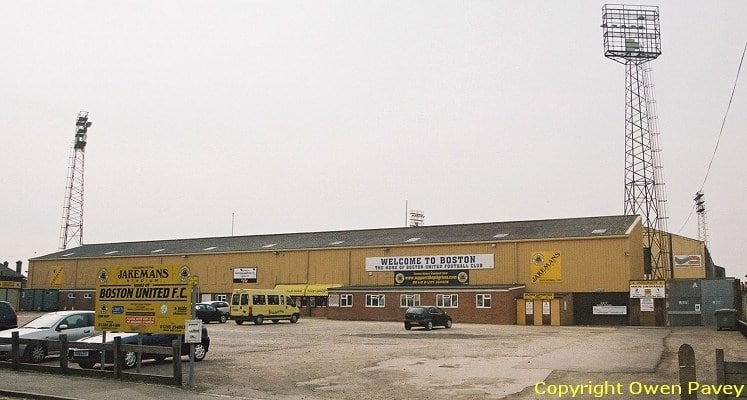 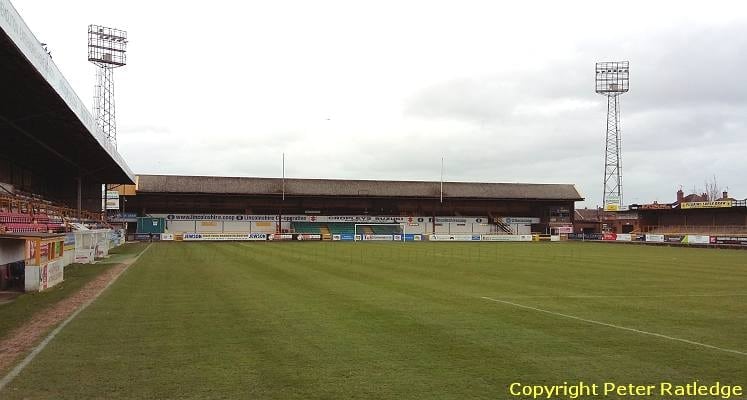 A rather picturesque ground that looks well balanced as all four stands are roughly of the same height. The Main Stand on one side of the pitch, is a good-sized, covered all seated stand. It’s only drawback are a couple of supporting pillars. It is single tiered, with the team dugouts located out front and incorporates the Directors Box. The other side, the Spayne Road Stand, is a smaller, newish covered terrace. It is so low that house roofs behind are clearly visible. The Town End is a fair-sized partly covered terrace (to the rear). The other end, the York Street Stand is a strange affair. It is raised above pitch level, meaning that spectators have to climb a staircase at the front to reach the seating area (which is mostly benches), whilst below to the front is a small terrace that has a block of seats directly behind the goal. The ground has a striking set of floodlights and something that I haven’t seen for a long time, flags fluttering in the wind, on each of the stand roofs.

In 2009 the ground was renamed the Jakemans Stadium in a corporate sponsorship deal. However many fans still refer to it as ‘York Street.’

With the building of a new stadium (see below) this will be the Club’s last season at York Street. So if you have never visited it, then make time to do so during this 2019/20 season or you will miss out on visiting a classic looking ground.

After a number of lengthy delays, the Club have commenced with the building of a new 5,000 capacity stadium, located South West of the town, just off the A16 near Woodside. This is part of a wider regeneration project known as the Quadrant, which includes housing. The new stadium is due to open in August 2020. Artists impressions of the new stadium and details of the wider regeneration project for the area (the works for part of which have which have commenced) can be viewed on the Quadrant Project website. York Street is one of a dying breed of old traditional grounds, with plenty of character. Coupled with a number of good pubs nearby in the town centre and normally a warm welcome, then it is usually a good day out. If less than 200 away fans are expected then they are housed in the small terrace at the front of the York Street Stand. If more than 200 are expected then the larger Town End Terrace, opposite, is allocated instead. This can house up to 2,050 spectators.

With a new stadium for Boston United on the horizon, then if you haven’t ever visited York Street, then have a chance to visit before it closes, then it may be wise to do so.

There is a Sports Bar at the ground called the Pilgrim Lounge that admits away fans. Otherwise there is the  Coach & Horses pub on Main Ridge, which is the nearest pub to the ground. It serves the excellent locally brewed Batemans ales and is listed in the Camra Good Beer Guide.

Ken Fox informs me; ‘The Coach & Horses on Main Ridge is the nearest pub to the ground. It serves the excellent Batemans ales which are locally brewed’. On the same road is the Eagle Chippy, which is normally busy on matchdays. Otherwise the ground is only a five minute walk away from the town centre, where there are plenty of good pubs to be found. The Eagle, in West Street near to the railway station and Wetherspoons outlet on the High Street called the Moon Under Water are both Good Beer Guide listed.

Pete Brooksbank recommends ‘the Robin Hood pub. Which is down the High Street, about a five minute walk from the ground over the river – where yet another excellent pint of Batemans awaits!’

From The North
From the A1 take the A17 towards Sleaford/Boston. After passing Sleaford take the A1121 towards Boston and then onto the A52. On entering Boston you pass Boston station on your left and then pass the junction with the A16 Spalding Road on your right. Go over the small Haven Bridge and straight along into John Adams Way (dual carriageway), the floodlights of the ground can be clearly seen on the right. Turn right at the next traffic lights, into Main Ridge, then take the next right into York Street.

From The South
From the A1 take the A43 towards Stamford and then on entering Stamford Town Centre take the A16 towards Market Deeping/Spalding and then onto Boston. On entering Boston you will go over a railway crossing. Bear right at the next set of traffic lights (signposted Boston College). Go over the small Haven Bridge and straight along John Adams Way (dual carriageway), the floodlights of the ground can be clearly seen on the right. Turn right at the next traffic lights, into Main Ridge, then take the next right into York Street.

Car Parking
There is no car parking as such for fans (unless you are a permit holder) at the ground itself. So you will need to either park in one of the town centre pay and display car parks or seek street parking.

Boston Railway Station is located just under a mile from the ground and is around a 10-15 minute walk away from York Street.

Head down Station Street towards the large church tower. At the end is a Police Station, bear right down the right hand side of the station and head over the river footbridge. Once across turn right up the alleyway, into Church Lane.  Keep going straight on, past the Britannia Inn and then cross the street to go down South Street. Take a left turn into Spain Lane and at its end you will come to a dual carriageway. The ground is clearly visible on the opposite side of it.

Boston Hotels - Find and Book Yours And Help Support This Website

If you require hotel accommodation in Boston then first try a hotel booking service provided by Booking.com. They offer all types of accommodation to suit all tastes and pockets from; Budget Hotels, Traditional Bed & Breakfast establishments to Five Star Hotels and Serviced Apartments. Plus their booking system is straightforward and easy to use. Just click on “Search” below or on the hotel of interest on the map below to select dates, get prices and more information. The map is centered on the football ground. However, you can drag the map around or click on +/- to reveal more hotels in the town centre or further afield.

If you require hotel accommodation in Boston, then first try a hotel booking service provided by Late Rooms. They offer all types of accommodation to suit all tastes and pockets from; Budget Hotels, Traditional Bed & Breakfast establishments to Five Star Hotels and Serviced Apartments. Plus their booking system is straightforward and easy to use. Yes this site will earn a small commission if you book through them, but it will go to help with the running costs of keeping the Guide going. The Hotels listing also includes details of how far away the accommodation is located from the Jakemans Stadium in Boston (showm as distance from centre).

Special thanks to Peter Ratledge for providing the photos of the Jakemans York Street Stadium, Boston United.