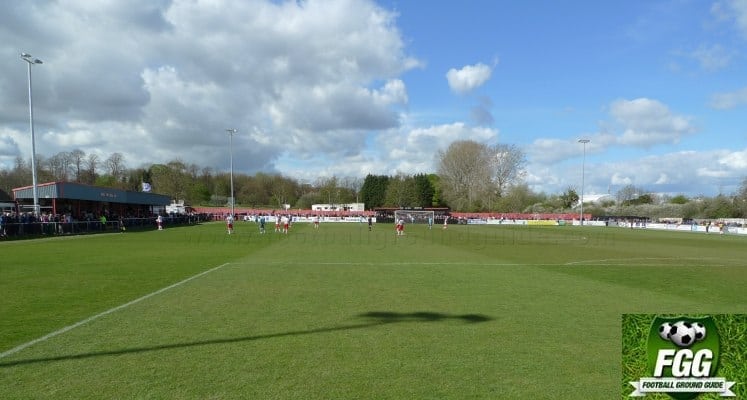 The ground is situated in a pleasant rural setting. On one side in front of the Social Club building is a small seated area, that is covered. It is only comprises four or five rows and has a number of supporting pillars running along its front. It is situated to one side of the half way line, towards the Cricket Club End. There are also open standing areas to either side. The opposite side has no facilities for spectators, apart from a narrow pathway which runs along the perimeter fence. The team dugouts are located on this side of the ground. There is also a portakabin type building that sits astride the halfway line, which on my visit, had a cameraman perched precariously on top of it videoing the game.

The Cricket Club End itself has a very small covered terrace which sits behind the goal. It is only a couple of rows high. To either side there are small flat standing areas. If segregation is in force then this end is allocated to away fans. Opposite is the South Bank. This area was recently developed so that it has a covered seated stand behind the goal flanked by fair sized open terracing to either side. There is a noticeable slope to the pitch running from the Cricket End down to the South Bank. The ground is completed with a set of six modern floodlight pylons.

It is not very often that fans are segregated at St James' Park. In the rare occurrence that they are then part or all of the South Bank End can be allocated to visiting supporters. This end has covered seating directly behind the goalmouth and open terracing to either side. I enjoyed my visit to the Club and Brackley itself is a pleasant small town, with some good pubs. One unusual aspect of St James' Park is that beyond the opposite end to the South Bank overlooking the ground is a Cricket Club and sometimes a cricket game can be seen being played at the same time as the football match. This can provide a welcome distraction if the soccer game isn't up to much!

There is a large social club at the ground, which welcomes away supporters. Although a bit dark inside, it has is brightened up by a large television projection screen which shows score updates. It is accessed from inside the ground.

The nearest pub is the Locomotive Inn, which is around a five minute walk away. This small old pub offers pies on matchdays and has real ale from the nearby Silverstone Brewery. Further up in the town (about a 10 minute walk from the ground) is the Crown Hotel which has a bar. There is also a handy fish and chip shop on this side of the road called Ann's'. To find these pubs; Then with the entrance to the ground behind you, walk straight up the road in front (Churchill Way). At the bottom of this road you will reach a T-junction. Turn left and you will see the Locomotive Inn a little further down across the road on the right. Or for the Crown Hotel (and the town centre) turn right at the T-junction proceed up the hill and you will reach the pubs on the left-hand side of the main road.

From the North:
Leave the M40 at Junction 11 and take the A422 towards Brackley. Stay on the A422 for just under nine miles until reach a roundabout that is the junction with the A43. Take the first exit towards Brackley Town Centre. Proceed straight across the next roundabout (there is a Tesco store on the left). After passing the Locomotive Inn on your left, take the next right into Churchill Way. The ground is situated at the bottom of this road.

From the South:
Leave the M40 at Junction 10 and take the A43 towards Northampton. After just under six miles you will reach a roundabout that is the junction with the A422. Take the second exit towards Brackley Town Centre. Then as North.

Car Parking:
There is a medium sized car park at the ground (around 80-100 cars), which costs £2 to park. Otherwise there is plenty of street parking along Churchill Way and roads to either side.

There is no longer a railway station in Brackley itself. The closest is probably Banbury which is over ten miles away. You can though get a the Stagecoach Bus No 500 from Banbury to Brackley, although for evening games there is no return service available.

Ross Hitchcock informs me; 'From Banbury bus station, 5 minutes walk from the railway station, Stagecoach route 500 runs to Brackley half hourly during the day Monday – Saturday and hourly in the evenings and on Sundays. Buses take 30-35 minutes to the Market Square in the centre of Brackley. See the Stagecoach website for timetables'. Lee Dearing adds; ' The Bus Station is only a five minute walk from the Railway Station; Exit the railway station and walk up to the end of the station approach road where you will reach a T-junction with Bridge Street. Turn left and at the next traffic lights at the crossroads with Concord Avenue, you should see the Bus Station over on the right immediately behind the Cherwell Council Building on the corner.'

Map showing the location of St James Park In Brackley

Brackley Hotels - Find and Book Yours And Help Support This Website

If you require hotel accommodation in Brackley then first try a hotel booking service provided by Booking.com. They offer all types of accommodation to suit all tastes and pockets from; Budget Hotels, Traditional Bed & Breakfast establishments to Five Star Hotels and Serviced Apartments. Plus their booking system is straightforward and easy to use. Yes this site will earn a small commission if you book through them, but it will help towards the running costs of keeping this Guide going.