Darlington FC returned to their home town in late 2016. after reaching a groundsharing agreement with Darlington Rugby Club to share their Blackwell Meadows ground. Although opened in 1994, Blackwell Meadows has seen a number of improvements and works to bring the ground up to Football Association standards, so that football matches can be played there.

The ground is overlooked on the North side, by a large pavilion looking building, which is two storeys high and has an old fashioned looking clock above it. This building as well as the one next to it, houses amongst other things the team changing rooms. To one side there is a block of covered seating, which is normally unused, and the team dugouts are situated in front of this area. On the South side is a covered seated stand that runs for half the length of the pitch and is situated just off centre, compared to the halfway line. It was in early 2018 extended to increase its capacity from 294 to 588 seats. There are flat standing areas to either side of this stand. At the one end of the ground is a sizeable covered terrace, which is eight steps high and is affectionately called the ‘Tin Shed’ named after a similar structure that was in place at the former Feethams Ground. In fact, some of the steel framework for this stand was rescued from the old ground and incorporated into this new structure. Having a capacity of 1,000, the new Tin Shed runs the full width of the pitch. Opposite is the open West Terrace, which when segregation is in force, is given to away fans. The ground is completed with a set of eight modern looking floodlights, four of which run down each side of the stadium.

It is also likely at some point that the Club will seek permission to install a terrace or a temporary seating area at the West End of the ground.

For most games at Blackwell Meadows, then fans are not segregated. However on the occasions that they are, then visiting supporters are allocated the West End of the ground, where around 600 fans can accommodated. When approaching the stadium, then the visitor turnstiles are located to the right of the main buildings. The West End has no cover and is mostly comprised of flat standing areas, so not the greatest. However as Darlington are well supported, then the atmosphere within the stadium is normally good, with a fair amount of noise being generated from the home end. With such good attendances then the facilities do seem to creak a bit with the large numbers and even when segregation is not in force then the seating areas are off limits to visiting fans, as they are sold out to home season ticket holders.

There is a clubhouse at the ground itself which is normally open to supporters of both clubs (unless segregation is enforced).  It is situated inside the ground and access is limited, so sometimes you need to wait until someone leaves. Usually there is Doom Bar and Theakston’s Lightfoot on handpumps, and the usual draft selection too. There is a lack of other pubs near to Blackwell Meadows. In fact the nearest bars and pubs are located one mile away in Darlington town centre, which is around a twenty minute walk away (There are buses every 15 minutes which stop near the ground). Some of the picks of these are some of those that are listed in the CAMRA Good Beer Guide, such as the Number Twenty 2 on Coniscliffe Road (on the ground side of the town centre), the Old Vic on Victoria Road (near to the railway station), the Quakerhouse on Mechanics Yard and the Tanners Hall on Skinnergate, the latter being a Wetherspoons outlet.

From the South (A1) Leave the A1 at Junction 57 and take the A66(M) towards Darlington/Teesside. At the end of the motorway continue onto the A66. At the next roundabout take the second exit onto the A167 towards Darlington. The entrance road to Blackwell Meadows is a quarter of a mile down this road on the right.

Car Parking There is some parking available at the ground which costs £5 per car. However it tends to fill up fast, so you will need to get there early. If you continue past the stadium entrance towards Darlington, then if you turn right at the next mini roundabout then there is street parking available alongside the park. It is then around a ten minute walk to Blackwell Meadows.

Darlington Railway Station is located one and a half miles away from Blackwell Meadows. Either grab a taxi from the station, or embark on the 30 minute walk to the ground. As you come out of the main railway entrance, you will see Hogans Bar on one corner. Keeping the bar on your left and proceed straight along Victoria Road. Go straight across at the next roundabout continuing along Victoria Road. At the next larger roundabout take the first exit by Sainsburys onto the A167 (Grange Road) towards Northallerton. Follow this road for around one mile. After passing a park on your left you will reach the ground entrance further down on the same side.

Concessions apply to Over 60’s, Students, the Disabled and serving members of the Armed Forces. ID may be required to be shown to prove current status.

* The club offer a £1 discount if tickets are bought online.

Find and Book Your Darlington Hotel And Help Support This Website

If you require hotel accommodation in Darlington then first try a hotel booking service provided by Booking.com. They offer all types of accommodation to suit all tastes and pockets from; Budget Hotels, Traditional Bed & Breakfast establishments to Five Star Hotels and Serviced Apartments. Plus their booking system is straightforward and easy to use. Yes this site will earn a small commission if you book through them, but it will help towards the running costs of keeping this Guide going.

Map Showing The Location Of Blackwell Meadows in Darlington

Thanks to Simon Brodie and Peter Holdridge for providing the photos of Blackwell Meadows. 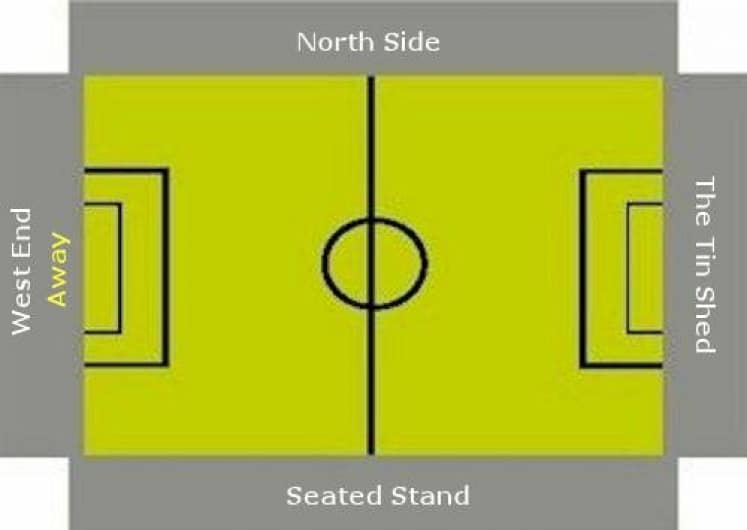