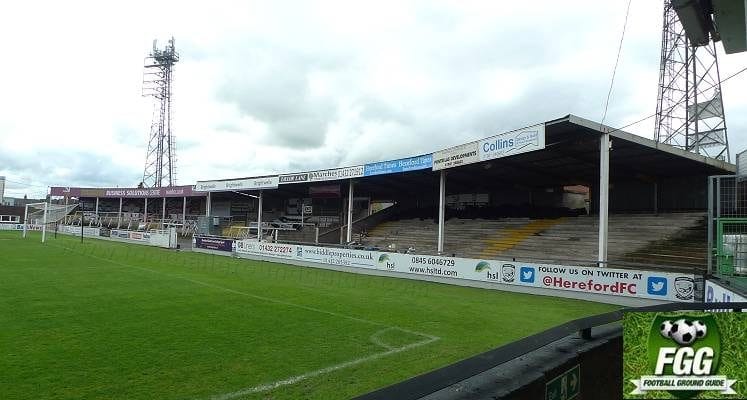 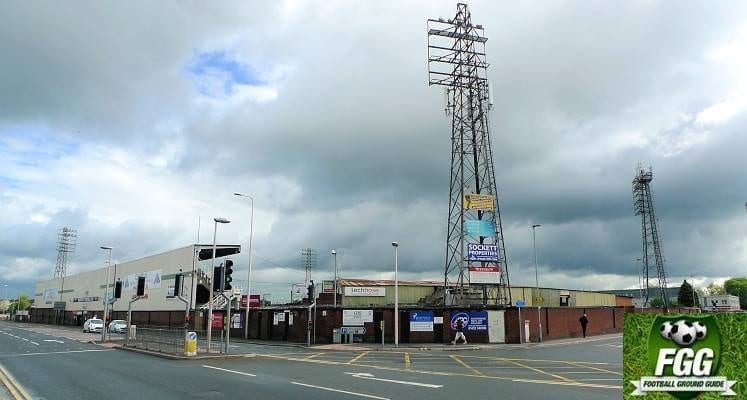 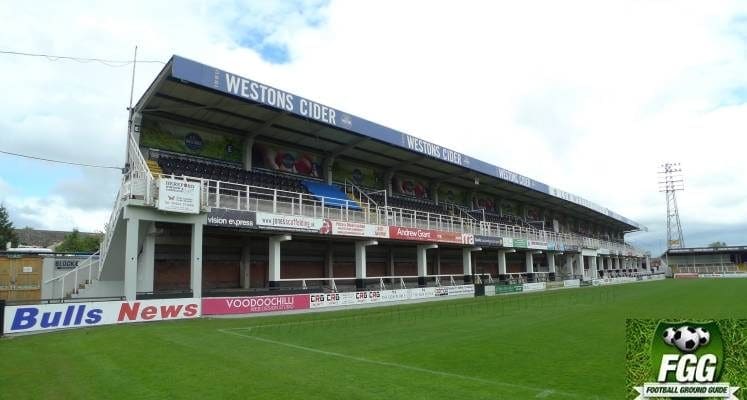 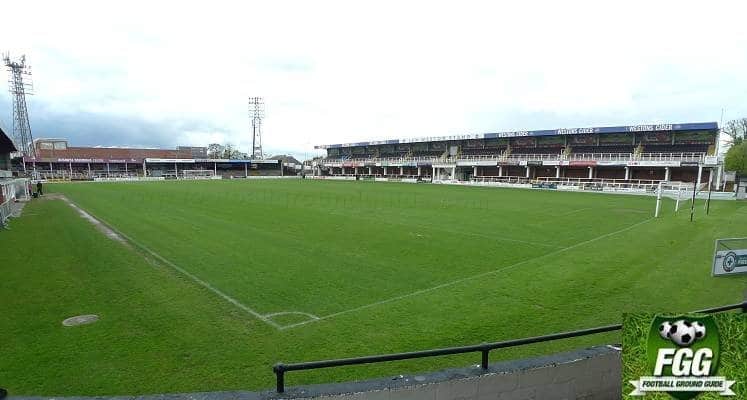 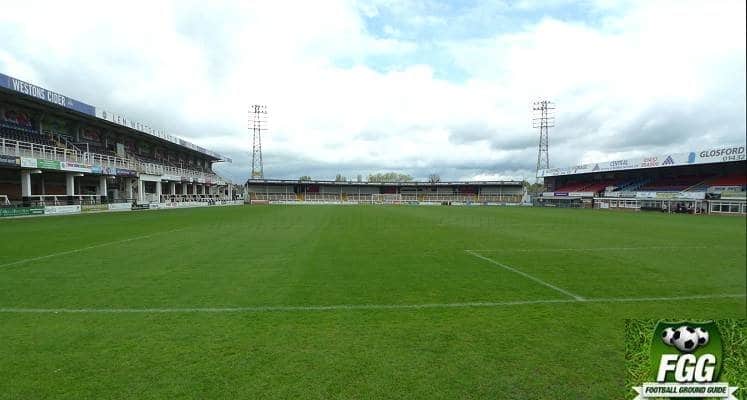 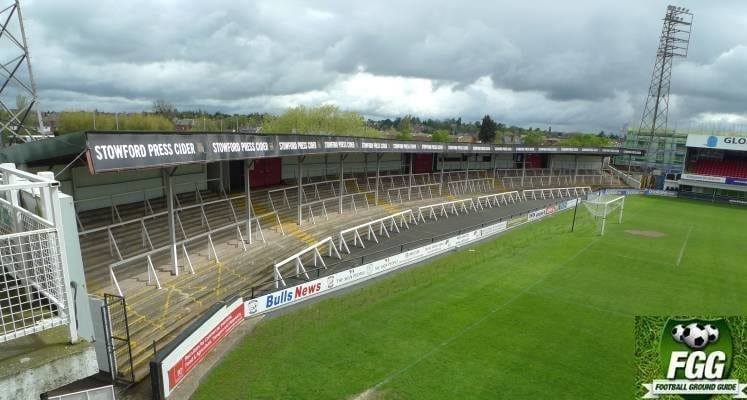 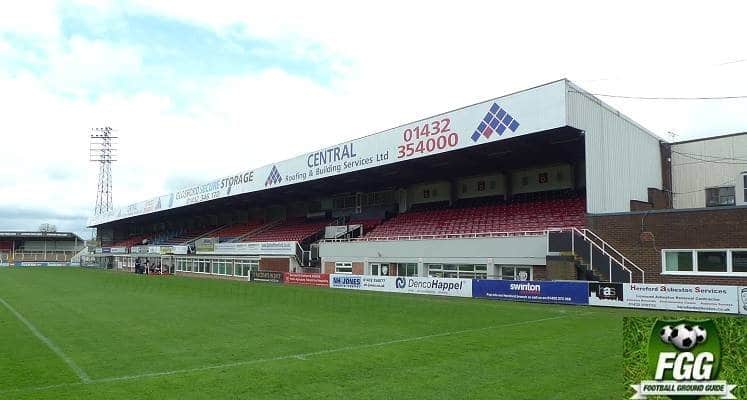 Well, there is an old saying that 'they don't make like them like this anymore,' and that is certainly the case with Edgar Street. From the large chunky floodlights to the semi-circular terraces, the ground is certainly 'old school.' But it is a proper old-fashioned football ground that is both unique and memorable.

Since the Club's formation as a fan-owned club in 2015 (following the demise of Hereford United), a lot of effort has been put into bringing the facilities up to scratch and to brighten up the look of the ground. On one side is the Merton Stand, which is a covered single tiered, all seated stand. It has an unusual look as the seating area is raised above pitch level, meaning that supporters need to climb a small staircase to enter it. Below at pitch level, there are a number of glass windows running along the stand and you do wonder how many have might have been broken over the years, via a wayward football. Opened in 1968, it has a capacity of around 1800 and serves as the Main Stand at Edgar Street, as it contains the dressing rooms, corporate facilities, club offices and has the team dugouts located out front.

Opposite is the Len Weston Stand. which is a strange looking covered, two-tiered affair. The upper tier which is all seated, with five rows of seats, directly overhangs the lower terrace, which has a number of large supporting pillars. Named after a former President of the Club, it is located very close to the main A49 road that runs behind. So you can see that the architects did very well to squeeze such a stand into a very tight space when it was built in 1974.

The home end, the Meadow Terrace, is a classic looking, partly covered (to the rear) stand. This stand is semi-circular in shape, going out around the back of the goal and has a number of supporting pillars. The opposite is the Blackfriars End, another partly covered terrace, with a similar shape. However, due to safety concerns, this stand has been closed for many years and it is unlikely to be re-opened in its current form. At the back of this terrace, a number of supporters flags have been hung up, which at least gives it some colour. The ground also has some large, unusual looking floodlights. 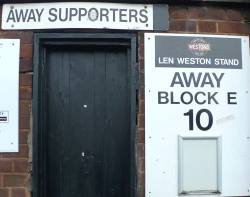 Segregation is normally in force for most games at Edgar Street. Away fans are housed on one side of the Len Weston Stand at one side of the pitch. This stand has an upper tier of seating that overhangs a lower tier of terracing. The views from this areas are a bit mixed as there is an annoying (but necessary) guardrail running along the front of the seated section, that could impede your view from the lower row of seats. Also, it is quite hard at times to see the near touchline. On the lower terrace, there is a row of concrete pillars running across the middle, which could cause problems if there is a large away following.

Entrance to the away section is to be found at the corner of Edgar Street and Blackfriars Street. Cash is not accepted at the turnstiles, so if you are not already in possession of a ticket, or have booked online earlier to collect from the away turnstile. then you will need to first by one from the Hereford Ticket Office located on the other side of the ground. The facilities within the ground are pretty basic but adequate. Hereford have good attendances and normally the atmosphere is decent. The cathedral city is also a pleasant one to visit. However, I would exercise caution around the ground as some of the home support can get quite passionate about their team at times. 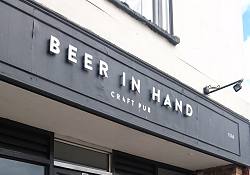 There is a club bar at the ground itself called Radfords. This is open before and after the game and normally welcomes away fans, except for certain high profile fixtures. This small bar enjoys views across the ground and serves real ale from the Wye Valley Brewery. Scott Lyndon adds, 'We found that the Oxford Arms near to the ground on Widemarsh Street to be friendly. It has a beer garden and shows Sky Sports.' Also on Widemarsh Street going towards the City Centre is the Herdsman Pub, which also serves food. If you like your ales then on Eign Street around a five-minute walk from the visitors' turnstiles is the Beer In Hand. This modern small bar serves a number of beers directly from the cask.

If arriving by train and walking to Edgar Street then you will pass a Wetherspoons outlet on Commercial Road, called the Kings Fee. Also nearby to the Wetherspoons are a number of other pubs and bars including the Merton, Yates, Hogarths and TJ's. Otherwise, the ground is only a five-minute walk away from the City Centre where there are plenty of pubs and eating establishments to be found.

From The North
Leave the M5 at Junction 8 and take the M50 towards South Wales. Leave the M50 at Junction 2 and take the A417 towards Ledbury and then the A438 towards Hereford. Keep on the A438 into Hereford and after passing the Victory pub on the left, bear right onto the inner ring road that goes around the town centre. At the large roundabout, turn right (by Debenhams) onto Edgar Street (A49) and then right again into Blackfriars Street for the ground. The car park entrance is down on the left.

From the South and London
Exit the M4 at junction 15 and take the A417 to Gloucester. Then follow the A49 to Ross-on-Wye and onto Hereford. After passing over the River Wye you will reach a large roundabout, where (keeping Debenham on your right) you go straight ahead into Edgar Street. Take Blackfriars Street (right) immediately before the football stadium. Turn left for parking.

From the South West
Leave the M5 at Junction 18a and take the M49. Join the M4 at junction 22 and turn left over the New Severn Bridge. At junction 24 take the A449 and follow until the Raglan roundabout. Take the Monmouth (A49 east) road and follow through the first roundabout. At the next roundabout, take the A4137. Join the A49 (left) and follow the signs for Hereford. After passing over the River Wye you will reach a large roundabout, where (keeping Debenham on your right) you go straight ahead into Edgar Street. Take Blackfriars Street (right) immediately before the football stadium. Turn left for parking.

Hereford Railway Station is located around three-quarters of a mile away from Edgar Street or a 15 minute walk. It is served by trains from Manchester Piccadilly, Birmingham New Street and Cardiff Central. As you come out of the station exit turn right and go straight along this road and you will see the stadium over on your left hand side. If intending to go to the Howard Arms then on reaching the first set of traffic lights, turn left and the Oxford Arms is a very short distance down on your right.

If you wish to go via the City Centre where there are more pubs en route, then on leaving the station entrance, turn left and walk up to the traffic lights, passing a Morrisons supermarket on your right. Turn right at the traffic lights into Commercial Road and walk down to the Merton Hotel. Just past the hotel on the right and immediately next to the traffic lights (and with the Kings Fee Wetherspoons over on the left) turn right going up the steps under the old brick arch and follow the pathway through the cemetery grounds. On exiting the cemetery grounds, cross the road and into Coningsby Street.  At the end of this road, turn left and immediately cross over to turn right into Blackfriars Street. The Edgar Street football ground is about 200 hundred yards further down on your right.  Entrance to the away end for visiting fans is at the far end of Blackfriars Street at the junction with Edgar Street. Thanks to Esmond Collins for providing the directions.

If you require hotel accommodation in Hereford then first try a hotel booking service provided by Booking.com. They offer all types of accommodation to suit all tastes and pockets from; Budget Hotels, Traditional Bed & Breakfast establishments to Five Star Hotels and Serviced Apartments. Plus their booking system is straightforward and easy to use. Yes, this site will earn a small commission if you book through them, but it will help towards the running costs of keeping this Guide going.

Map Showing The Location Of Edgar Street In Hereford

If there is anything that needs to be updated or if you have something to add to the Guide to Edgar Street Hereford then please email me at: contact@footballgroundguide.com. 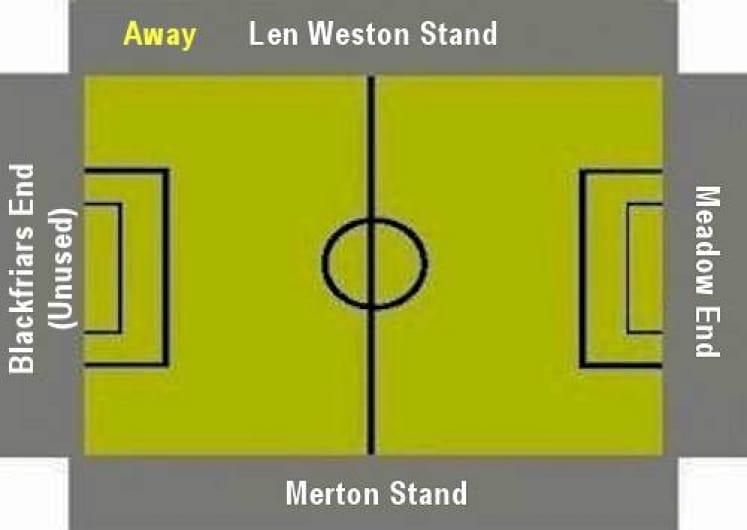