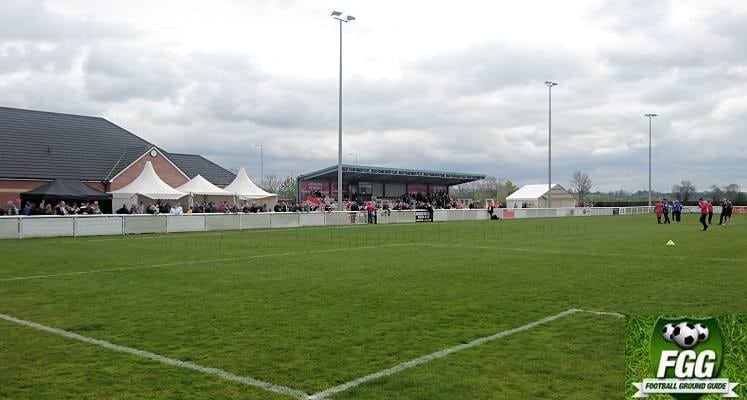 Following a period of ground-sharing with Cheltenham Town, the Club now share the Jubilee Stadium, the home of Evesham United FC. Although located 23 miles from Gloucester it is hoped that their stay will be just one season, whilst their new Meadow Park Stadium in Gloucester is being built.

Although Evesham United play two leagues below Gloucester City in the Evo-Stik Southern League, the ground is a modern and tidy one, being first opened in 2012. Located on the very Southern edge of Evesham it enjoys a semi-rural location with fine views of hills in the distance beyond the West side of the stadium. On the East Side of the ground straddling the half way line is a small Main Stand. Running for around a quarter of the length of the pitch, this simple prefabricated stand contains 300 seats in seven rows and is covered. It has a small enclosed glassed area at the back, for the stadium announcer and is free of any supporting pillars. It is though quite set well back from the pitch. There are flat standing areas to either side of this Main Stand. Oddly the team dugouts are not located in front of this stand but on the opposite East side. This side has no spectator facilities as such, just a pathway running alongside the pitch perimeter fence.

At the Social Club or Town End there is a small covered standing area behind the goal. Set back from pitch side, this flat standing area has a number of supporting pillars running along the front of it. At the opposite South End, there is a prefabricated open terrace, which was installed in 2017. It is comprised of six steps and although like the other stands at the ground it is set back from the pitch it at least provides an elevated view of the match. The Jubilee Stadium has a set of eight floodlights four of which run down each side of the ground.

In a corporate sponsorship deal the stadium is officially known as the Spiers & Hartwell Jubilee Stadium.

After an absence of 13 years the Club may finally be going home after it was announced that the construction of a new ground on the site of the former Meadow Park ground will begin on January 6th 2020. The Club were forced to leave their Meadow Park ground in July 2007, after some of the worst flooding recorded in the area, engulfed the stadium, with water almost reaching the height of the crossbars! The Club have been desperately trying to return to Meadow Park, but have had to overcome a number of obstacles to make it happen, which it seems to be doing at long last. The new stadium will have a capacity of 3,648 including two 350 seat stands that will be built either side of the halfway line. If construction goes to plan then the Club hopes to kick off the new 2020/21 season back at Meadow Park.

As some of you may already know, the Gloucester City Stadium is a relatively new build. Due to destruction from flooding back in 2007, this stadium has needed to undergo a bit of a makeover. The stadium itself was actually completed as recently as 2020, and things have certainly gone down well with Gloucester City fans so far. Thanks to the renovation effort, the capacity of the previous stadium has been boosted. Now, a total of 4,000 fans can watch Gloucester City during home games, which is a fair increase from the previous number.

A computerised image of how the new stadium will look: The current surface of the Gloucester City Stadium, or Meadow Park as it is commonly referred to, is 4G. This was another part of the renovation that has taken place over the last 10+ years. In total, the renovation of the stadium has cost the club around £4 million. This is obviously quite a bit of cash for a club the size of Gloucester City, but regardless, they got the funds together through various channels and today, the stadium is enjoyed by all.

The stadium itself is actually located on Sudmeadow Road. And if you have previously been to any Gloucester City games prior to 2007, you’ll know exactly where this is. Interestingly, the new stadium only has space for 762 seated spectators, all of which are based under the shelter of the stadium on the side of the pitch. So this means that more than 3,000 fans are able to watch the game from a standing position, something which is quite common in the lower leagues.

Today, the stadium looks better than ever, with a quality pitch and floodlights around the various parts of the ground. Of course, the cost involved has been far from ideal, but they now have this stadium up and running!

On the rare occasion that visiting fans will be segregated at the Jubilee Stadium, then away supporters are housed in the South End of the ground. This open end has a small terrace with flat standing areas to either side. It has a capacity of 400 fans. Entrance to this end is via a new turnstile block, located to one side of the Main Stand. Normally a relaxed and friendly day out.

There is a fair sized Social Club at the stadium which normally welcomes visiting fans. The nearest pub is the Strawberry Field, located just under a mile away alongside the A46. This pub which is part of the Hungry Horse chain also offers food and is family friendly. On the same retail complex is a Frankie & Benny’s, McDonalds and a Morrisons Supermarket. Otherwise, there is not much else near to the stadium. Evesham Town Centre is one and half miles away (and probably a bit too far to walk from the ground before the match), where there are a number of pubs to be found including a Wetherspoons outlet located on the High Street.

From The North and Midlands M42

Leave the M42 at junction 3 and take the A435 towards Evesham. Follow the A435 and then as it becomes the A46, for 19 miles to reach the outskirts of Evesham. At the roundabout that is the Junction with the A44 and has a services area on one side, take the second exit to continue along the A46 (signposted M5 South/Oxford). Continue straight across at the next three roundabouts and at the fourth take the second exit into the Club Car Park.

From The South and M5

Leave the M5 at Junction 9 and take the A46 towards Evesham. Follow the A46 for ten miles, until you reach a roundabout on the very outskirts of Evesham, where you take the first exit into the Club car Park.

There is a fair sized car park at the ground which is free.

Evesham Railway Station is located around two miles from the Jubilee Stadium, so best to jump in a taxi. The station is served by trains from London Paddington and Worcester Foregate.

If you do want to walk, then it is a fairly straight route which should take around 35-40 minutes. On leaving the station walk up to the main road and turn right, towards the town centre. Keeping the Station Hotel on your left, proceed along the High Street and through the town centre. On reaching the end of the High Street and with the ‘Ye Olde Red House’ pub on your right, then at the roundabout take the first exit onto Abbey Road. Follow this road around the outskirts of the park and then over the River Avon. Once across the River, the road becomes Cheltenham Road. Keep straight along Cheltenham Road for one mile and you will reach the Jubilee Stadium on your right.

All areas of the stadium:

Map showing the location of the Jubilee Stadium In Evesham

Find and Book Your Evesham Hotel And Help Support This Website

If you require hotel accommodation in Evesham then first try a hotel booking service provided by Booking.com. They offer all types of accommodation to suit all tastes and pockets from; Budget Hotels, Traditional Bed & Breakfast establishments to Five Star Hotels and Serviced Apartments. Plus their booking system is straightforward and easy to use.Yes, this site will earn a small commission if you book through them, but it will help towards the running costs of keeping this Guide going.