The stadium is primarily an athletics stadium that also houses the town’s two major sporting clubs; Gateshead FC and Gateshead Thunder Rugby League Club. The stadium, which has a bowl-like effect, has a playing surface surrounded by an international standard athletics track.

The Tyne & Wear Main Stand on the west side is a large all seated covered stand, which has a capacity of 3,227. The angle of the stand is quite steep and it has windshields to either side. Although some distance from the pitch, the sight lines are very good. On one side of the Tyne & Wear Stand, there is a two storey structure which includes a large cafe/bar area, plus corporate and boardroom facilities.

Opposite the Tyne & Wear Stand is the 4,044 capacity East Stand, which is another large sized bank of seating that is now under cover. Both ends of the ground are comprised of smaller banks of seating that are open to the elements. These ends are normally not used for football matches.

Away fans are located in the large East Stand on one side of the stadium. This stand has a capacity of 4,000, more than ample for most conference teams away followings in the National League! The stand is covered, free of supporting pillars and so fans have an unobstructed view of the playing action. The facilities inside the stand are good, as well as the catering which offers a selection of Pies (£2.40), Pasties (£2.40) and Sausage Rolls (£1.70), plus Hot Dogs, Burgers and a range of hot and cold drinks at reasonable prices. However, the East Stand is well set back from the pitch, with eight lanes of the athletics track to contend with, before reaching the playing area. Plus with the home fans located in the opposite Main Stand, the atmosphere can be at a premium, unless a large visiting contingent is in town.

Adam Hodson a visiting Stockport County fan adds; 'We sat in the East Stand, which I thought was pretty good with no obstructions and plenty of leg room. To get to the East Stand, walk anti-clockwise around the stadium from the main Tyne & Wear Stand, turn left and follow the pedestrian track until you get to the visitors entrance.'

The Club have announced their intention to build a new purpose built stadium on the former site of the North Durham Rugby & Cricket Club in the centre of Gateshead opposite the Civic Centre.  The stadium will be covered on all four sides and of Football League standard, with a 7,000 capacity, including a 2,000 seated Main Stand. The stands on each side will be all seater with terracing behind both goals However no firm timescales have been announced as to when this might happen. An artists impression of how the new stadium will look can be found on the official Gateshead FC website.

There is a bar located inside the Main Stand, called the 'Stadium Bar' but unfortunately this is for home fans only. Probably the closest pub is the Schooner, which sits on the Banks of the River Tyne. It has up to six real ales on tap and serves food too. To find this pub then continue down Neilson Road (to the left of the main stadium entrance), away from Park Road and towards the Tyne. Then cross Saltmeadows Road and head down South Shore Road, and the pub is down this road on the left. It's only a few minutes walk away. If arriving by train then it may be a better idea to drink in the centre of Newcastle and then get the Metro out to the Gateshead Stadium Metro. Please note that alcohol is not made available to away fans in the East Stand.

Car Parking
There are three car parks at the stadium which are free to use.

The stadium has its own Metro stop called Gateshead Stadium, which is a five minute walk away. This stop is around a ten minute journey away from Newcastle Central railway station, which is also the nearest mainline station. Adam Hosdon a visiting Stockport County fan informs me; 'Metro trains for Gateshead Stadium are bound for South Shields or South Hylton'. Whilst Jonathan Beverley a visiting Southport fan provides these walking directions; 'As you come out of the  Metro station, turn right, and just after you pass over the railway line turn right again onto a footpath which takes you straight through a new housing estate. Keep going straight ahead until you reach the main road, and the ground is just on the other side of the road over the pedestrian crossing'.


Concessions apply to Over 60's, Students and serving members of the Armed Forces and Emergency services

* Doesn't apply to cup games
** Under 12's need to be accompanied by a paying adult.

Newcastle Hotels - Find and Book Yours And Help Support This Website

If you require hotel accommodation in Newcastle then first try a hotel booking service provided by Booking.com. They offer all types of accommodation to suit all tastes and pockets from; Budget Hotels, Traditional Bed & Breakfast establishments to Five Star Hotels and Serviced Apartments. Plus their booking system is straightforward and easy to use. Yes this site will earn a small commission if you book through them, but it will help towards the running costs of keeping this Guide going. 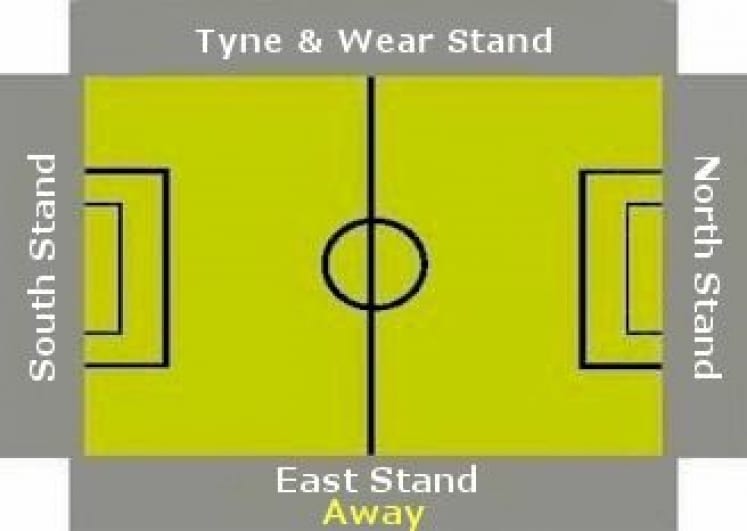