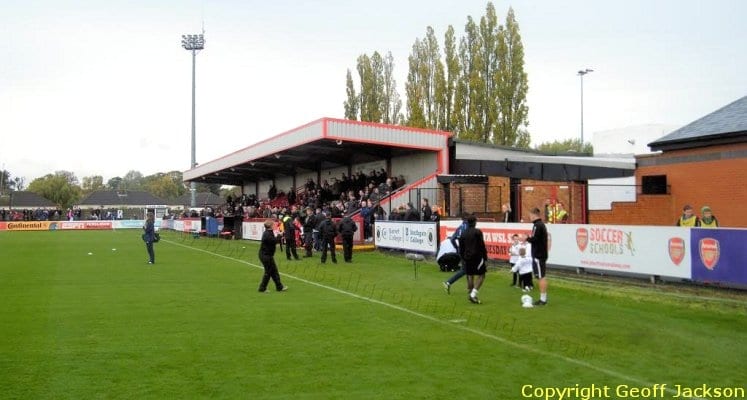 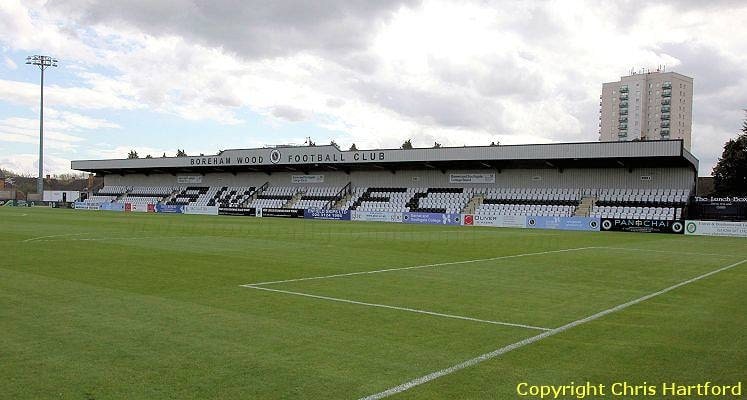 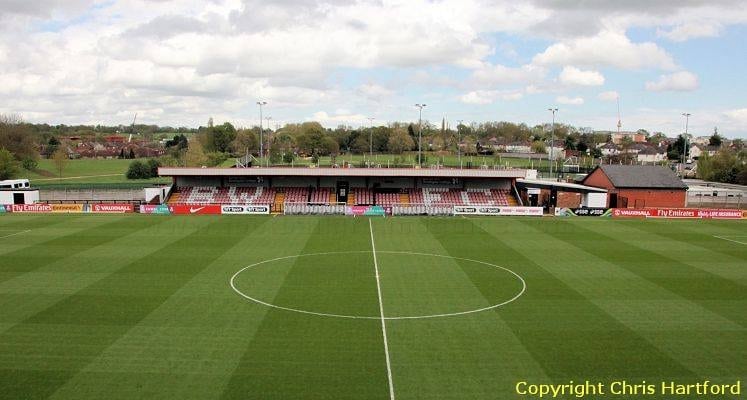 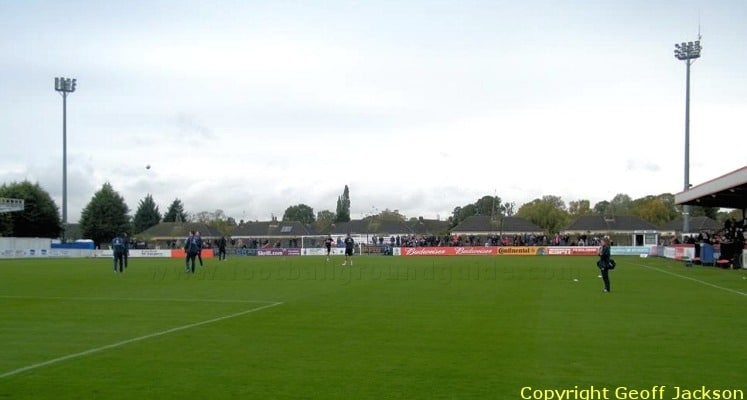 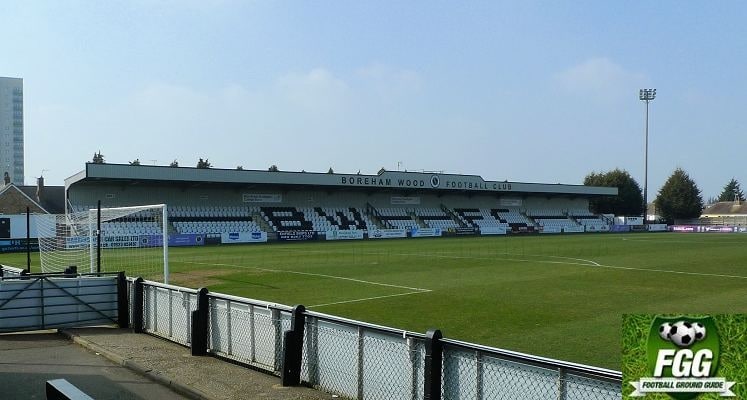 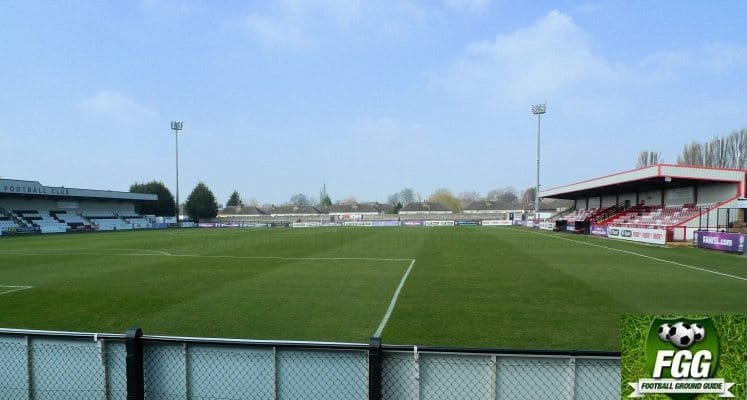 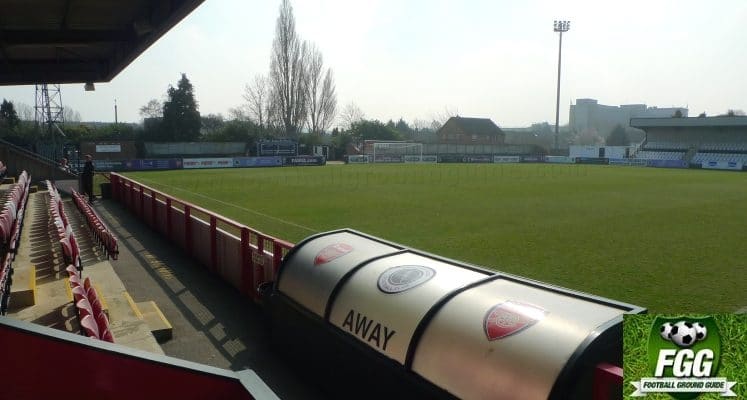 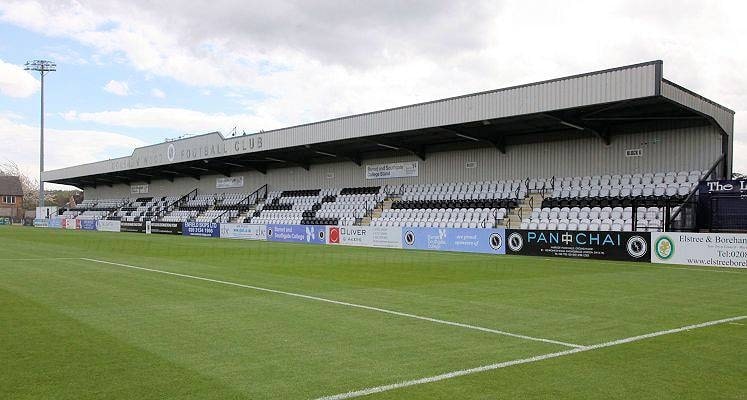 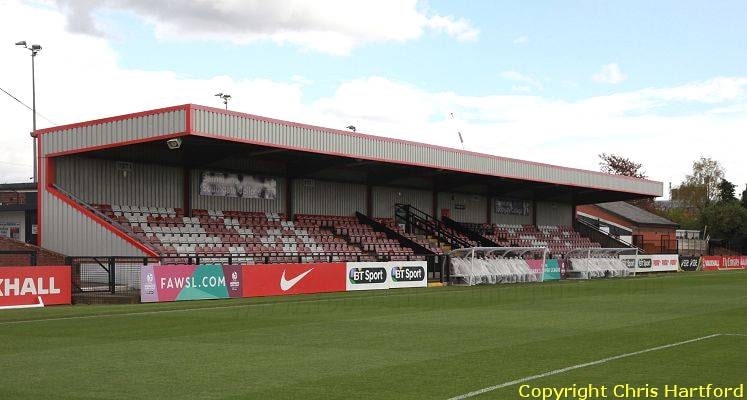 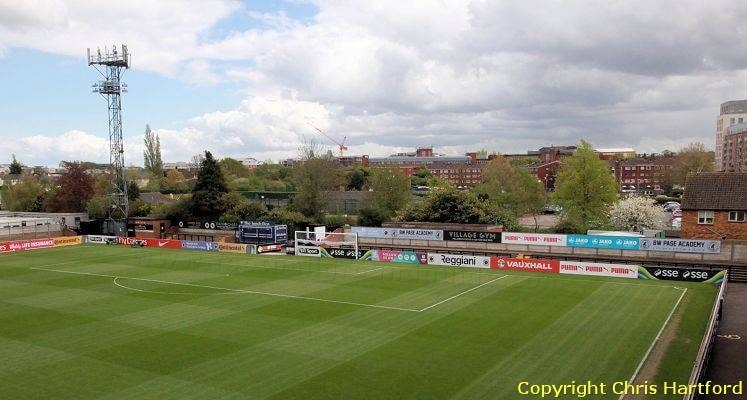 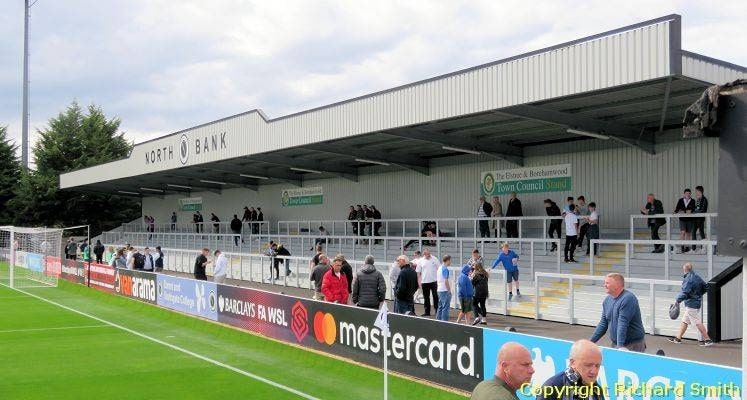 The overall look of Meadow Park has improved with the building of a new covered terrace at the North End of the stadium. Opened in 2019 this medium sized terrace replaced a former open one. Known as the North Bank, it is quite smart looking, although it is set back from the pitch perimeter. On one side of Meadow Park is the smart looking West Stand that was officially opened by Arsene Wenger in 2014. This stand has a capacity of 1,200 seats and is covered. It is quite steep, meaning that fans are kept close to the playing action. There is a 'plinth' area above the stand which is used as a television gantry, which gives the stand an interesting look. The opposite is the Main Stand, which again is a modern looking all seated stand, that has a capacity of 500 and is covered. It runs for around half the length of the pitch and sits astride the halfway line. Like the modern West Stand it is free on any supporting pillars, giving a good view of the playing action. The team dugouts are situated in front of this stand.

The South End has portions of open terrace and flat standing areas. In the South East corner of the stadium, there is a rather tall and ugly looking mobile telephone mast, but it has been put to good use, serving also as one of the four floodlight pylons. In the North East corner of the stadium is a small club shop which is housed in a temporary building. On top of this is mounted a small electric scoreboard. Meadow Park is also used by Arsenal Ladies FC for their home games as well as Watford FC reserves.

After a number of delays the Club have begun works on the building of a new covered terrace at the North End of Meadow Park. Having a capacity of 1,400 it is hoped that it will be open for the start of 2019/20 season.

Normally fans are not segregated at Meadow Park. If segregation is in force the away supporters are mostly housed in the South Terrace at one end of the ground. This open terrace, which is located close to the playing action, has around eight steps and is split into two areas behind the goal and either all or half the terrace can be allocated. In addition, half of the modern West Stand (towards the South Terrace) is also allocated to visiting supporters and around 600 fans can be seated in this area. The relatively new West Stand enjoys good views of the playing action, has ample leg room for most and the spectator facilities are good too.

Usually, a visit to Meadow Park is a relaxed and enjoyable day out. However with the Club having generally smaller attendances for this level of football, then the atmosphere within the stadium can sometimes be lacking. Hot food and drinks are available in-between the two sections of the South Terrace from a mobile catering unit called the ‘Lunch Box’.

At Meadow Park itself is the Three Lions Bar, but this is normally for home fans only. However, Meadow Park is only a 5-10 minute walk from the town centre where there are plenty of pubs and eating places to be found, including a Wetherspoons outlet called the Hart and Spool, on Shenley Road. Also on Shenley Road is the Wishing Well pub, that has the added benefit of showing televised sports.

To find the town centre from the ground then simply from the top of the Meadow Park access road (called Broughinge Road) turn left. At the roundabout turn right onto Shenley Road and this leads into the centre.

Leave the M25 at Junction 23 and take the A1 towards London. Then leave the A1 at the first turn off and take the A5135 towards Boreham Wood. Continue along the A5135 towards the town centre, going straight across at the first small roundabout and at the next large roundabout, take the second exit onto Brook Road (signposted Boreham Wood Football Club). Then take the next right into Broughinge Road and the ground entrance is down on the right.

There is a car park at the ground, but this is only for players and Club officials. A few minutes walk from Meadow Park is the Brook Road 'pay and display' car park, which costs £2.20 for three hours, £3.20 for four hours or £5.20 for all day. The car park is free after 6.30pm and on Sundays. Please be aware that in the streets around the stadium a residents only parking scheme is in operation, so please check lamp posts for warning signs of this before parking up.

The nearest railway station is Elstree & Boreham Wood which is located just under one mile away from Meadow Park. The station is served by trains from London St Pancras and Luton.

As you come out of the station entrance bear left and walk up to the main road. Turn right into Shenley Road and proceed along the High Street, until you reach a small roundabout. Turn left at the roundabout into Eldon Avenue (there is a McDonalds over on the right of this road). At the bottom of Eldon Avenue turn right into Brook Road and the entrance to the ground is down on the left. The journey from the station should take around 15-20 minutes.

Boreham Wood Fixtures (takes you to the BBC Sports Website).

If you require hotel accommodation in Boreham Wood or London then first try a hotel booking service provided by Booking.com. They offer all types of accommodation to suit all tastes and pockets from; Budget Hotels, Traditional Bed & Breakfast establishments to Five Star Hotels and Serviced Apartments. Plus their booking system is straightforward and easy to use. Yes this site will earn a small commission if you book through them, but it will help towards the running costs of keeping this Guide going.

Special thanks to Chris Hartford and Richard Smith for providing the photos of the Meadow Paek Boreham Wood. 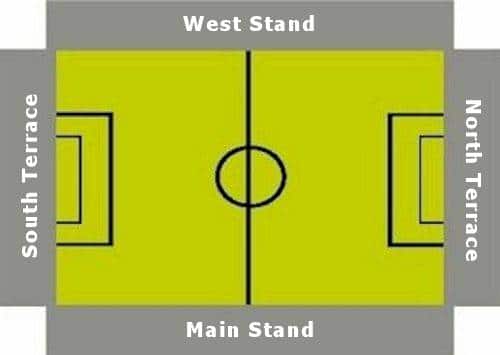