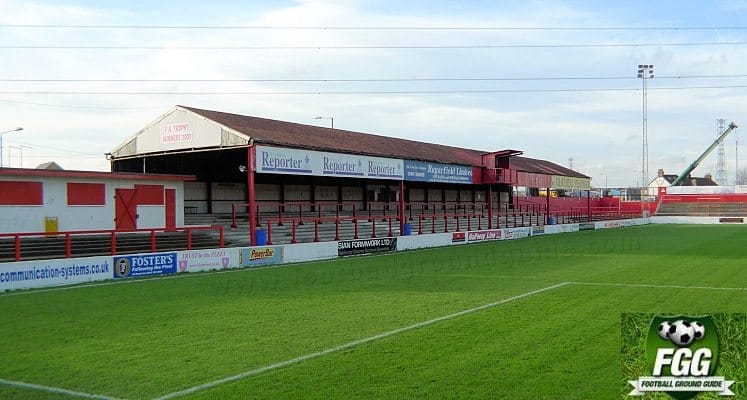 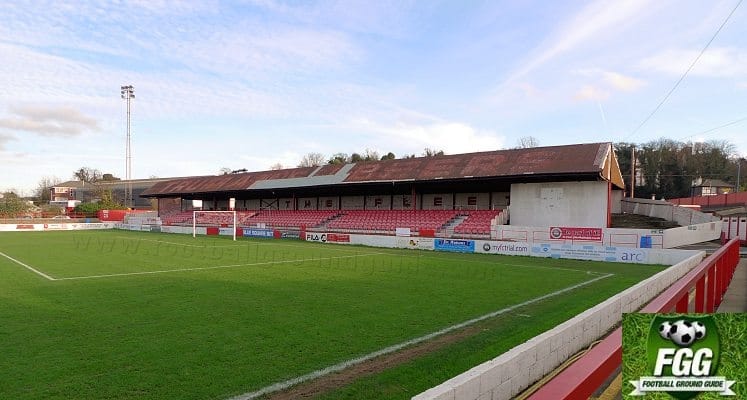 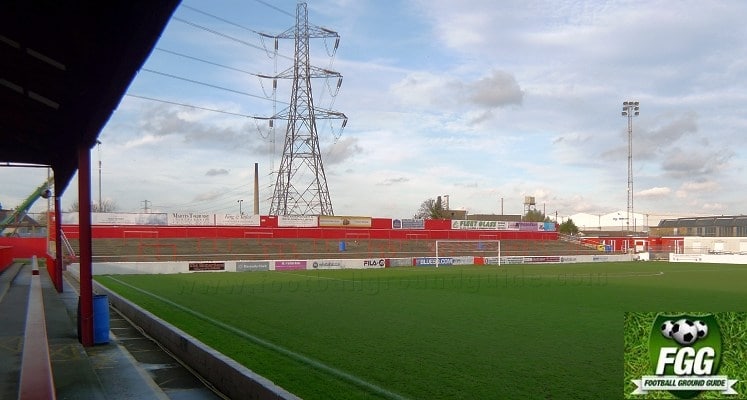 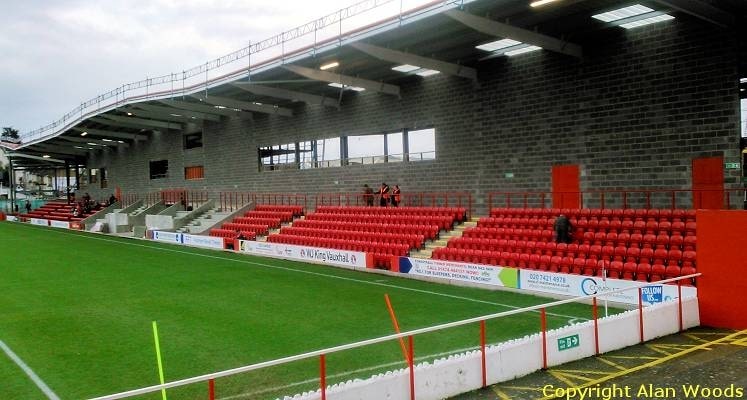 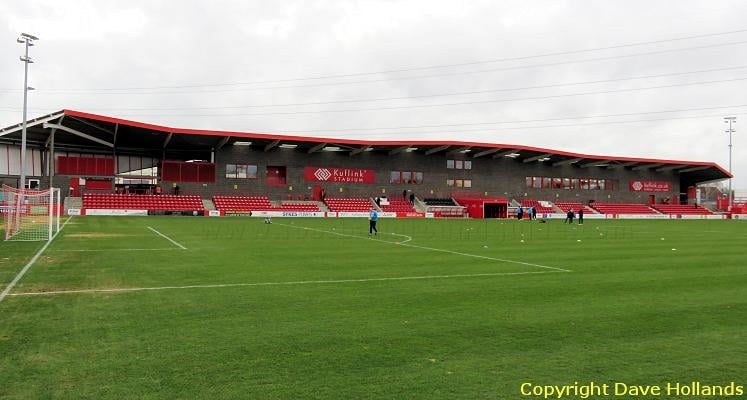 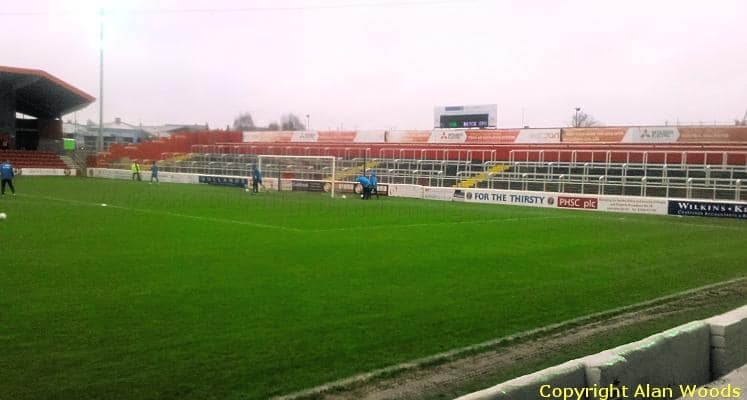 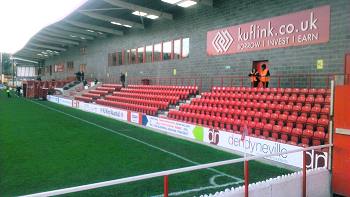 The Stonebridge Road ground has seen some new development with the building of a new Main Stand on one side. This new stand which was opened in November 2017, runs the full length of the pitch. It is unusual looking in that the roof is situated quite high above the seating area, with a tall back wall. The Main Stand roof also curves upwards in the middle over the halfway line. It has a capacity of 1,016 seats. On the opposite side of the ground is an old but classic looking wooden Main Stand. This single tiered covered stand, is all seated and runs for around half the length of the pitch. This stand has a fair number of supporting pillars running along the front of it, although the seating is raised above pitch level. There is also a tiny terrace in front of this stand. At one is end is a covered stand, known as the Plough End, gaining its name from the former pub that was situated just behind it. This is a former covered terrace, which has since had 534 seats installed. From a distance, this stand looks quite picturesque as it is has a wooded hill just beyond it. The opposite end, known as the Swanscombe End, is an open terrace, that is dominated by a huge electricity pylon which sits directly behind it. In 2018 this had a number of new safety crush barriers installed as well as an electric scoreboard at its rear. The ground is completed by a set of new floodlights which were installed in the Summer of 2014. The Club Shop is located inside the ground.

In 2017 the Stonebridge Road ground was renamed the Kuflink Stadium in a five year sponsorship deal.

The Club was formed in 1946, following the merger of Northfleet United and Gravesend United. It was renamed Ebbsfleet United in 2007.

The Club have announced ambitious plans to effectively build a new stadium on the current site of Stonebridge Road. The new stadium, which will be built in phases and will have a capacity of around 8,500, including 2,000 seats. The first phase of the proposed development has been completed with the opening of the new Main Stand and the refurbishment of the Swanscombe End. The other sides of the ground (and alas the final demise of the classic looking old Main Stand) will also be redeveloped, including next, the Plough End which will see new terrace built. This will also include the building of a new tall hotel building situated directly behind it. The terrace will be built in such a way that it can easily be converted to seating at a later stage if needed. The Club are expected to commence with the building of the terrace and hotel in October 2018, with the works taking a year to complete.

An artists impression of how the Plough End and Main Stand is shown below, courtesy of the Ebbsfleet United website where more images and information about the redevelopment can be found. At a later stage, it is then expected that the old Main Stand side will be redeveloped with the remaining Swanscombe End being the last to be redeveloped. The final completed stadium will be totally enclosed. 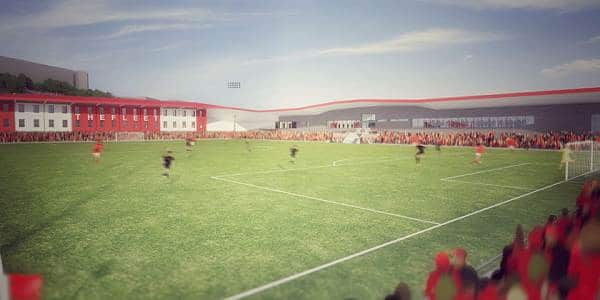 If on the rare occasion that segregation is in force then visiting fans are allocated the Swanscombe End. This terrace is of a good size, is fairly steep and has recently had new crowd barriers installed upon it. It has a capacity of just under 2,400 supporters. Fans can enjoy a good view of the playing action from this terrace, however it is uncovered and hence open to the elements, so hope that the weather is good. Facilities are quite basic in this end and hot food and drink are available from a mobile burger van. Stewarding is normally relaxed and on the whole the Club is welcoming. Visiting fans particularly enjoy the clubhouse bar at the ground and that segregation is not normally in force, which is becoming less common in this league.

Inside the ground is a comfortable Fleet Lounge Club Bar which is popular with both home and away fans alike. However, it may be advisable to check before entering the ground, whether segregation is in place, as if so, then as an away supporter you may not be able to gain access to it. It normally has a locally produced real ale on sale. Around a ten minute walk away heading up Stonebridge Road in the direction of Northfleet will lead you to the Edinburgh Castle pub on the High Street. Close to Northfleet Railway Station in Rose Street, as is the aptly named Rose pub. There are also a number of fast food outlets situated along the High Street.

First thing to note is that the ground is in Northfleet.

From the M25 (South)
Leave the M25 at Junction 2 and take the A2 towards Gillingham. Then take the B262 towards Stone/Greenhithe. At the end of the B262 turn right onto the A226 towards Northfleet & Gravesend. Keep on this road until you reach the ground on your left.

From the M25 (North) – Dartford Bridge
After coming over the bridge keep to the left hand lanes and after passing through the toll booths turn left onto the A226, towards Northfleet. Keep on this road until you reach the ground on your left.

There is no parking available for visiting fans at the ground, however there is some street parking to be found on side roads off the A226. Otherwise as Keith Wood adds; ‘Parking is available on matchdays in Car Park C at Ebbsfleet International, which also costs £3’. The car park is about a five minute walk away from the ground.

Northfleet Railway Station is the closest to the ground, which is only a few minutes walk away from Stonebridge Road. Northfleet station is served by trains from London Bridge and Charing Cross. Just come straight out of the station and turn left at the top of the road. The ground can be then seen down on the right.

Ben Hudspith a visiting Kidderminster Harriers fan informs me; ‘I found it easier to go from London St Pancras on the high speed service and get off at Ebbsfleet International. The journey time from St Pancras is under 20 minutes and trains are every 15 minutes in both directions. For walking directions come out of the side entrance near platforms 5 and 6 (the north Kent line), which will bring you out into Car Park C. Walk right down to the end of this car park and through the entrance then walk straight under the bridge and you will see the ground right in front of you. It will take about five minutes for you to walk or there is a Fast Track bus available from the main entrance of the station which runs every 10 minutes. Going by train this way also has the added bonus of being able to go to Gravesend beforehand (the next stop on train from Ebbsfleet International and only a couple of minutes journey time), where there are a wider variety of pubs to be found. I found both the Somerset Arms, which showed live televised sports and the Railway Bell outside the railway station to be both very welcoming’.

Dartford and from further afield Margate.

Find And Book Your Local Hotel And Help Support This Website

If you require hotel accommodation in Gravesend then first try a hotel booking service provided by Booking.com. They offer all types of accommodation to suit all tastes and pockets from; Budget Hotels, Traditional Bed & Breakfast establishments to Five Star Hotels and Serviced Apartments. Plus their booking system is straightforward and easy to use. Yes this site will earn a small commission if you book through them, but it will help towards the running costs of keeping this Guide going.

Special thanks to Alan Woods and Dave Hollands for providing photos of the new main Stand at the Kuflink Stadium, Ebbsfleet United. 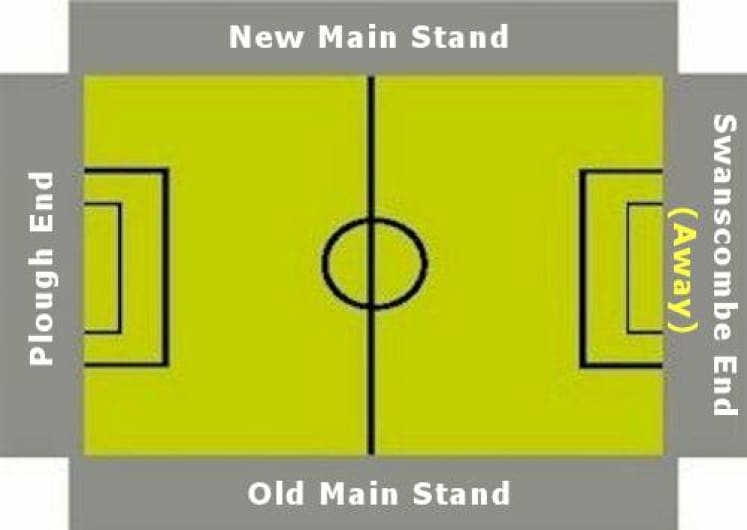