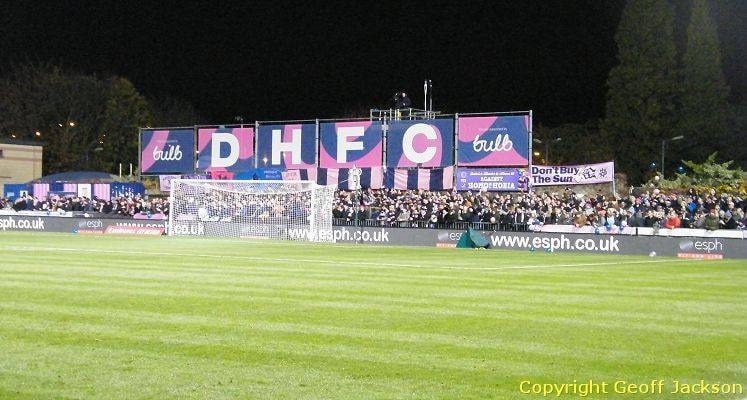 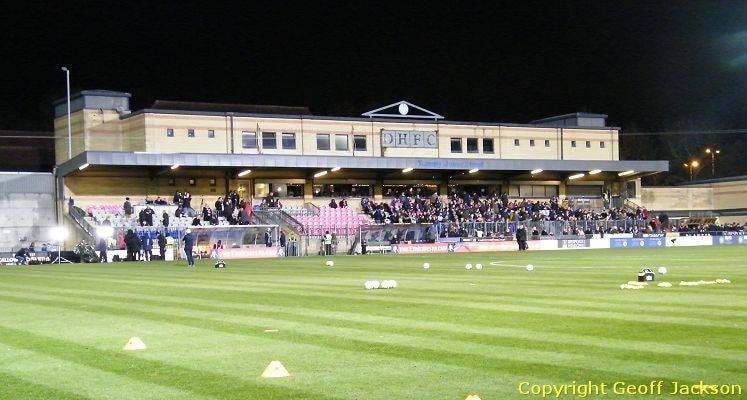 The Champion Hill ground is largely open and has mostly flat standing areas on three sides, with just a small portion (a few steps high) of terracing towards the rear. Both the East and West ends are uncovered, as well as most of the Southside, although this does have a small portion of cover and terrace located at its centre. However, the Tommy Jover Main Stand on the other side is quite a posh looking affair, even though it has been built onto the front of an office building. This all seated stand is elevated, meaning that you have to climb a small set of stairs to enter it. Once there you are rewarded with excellent views of the pitch as there are no supporting pillars to contend with. There is a glassed area visible to the back of this covered stand that contains the Social Club. The area is covered and the roof has a gable on top which includes a clock. DHFC is proudly emblazoned below it. There is a large ugly radio mast that overlooks the ground from the South West corner. The East End of the ground is also known as the Car Wash End. The stadium is completed with a set of four modern looking floodlights.

Dulwich Hamlet FC and Meadow Partners who own the site of the current ground have submitted a joint planning application to build a new 4,000 capacity stadium on the site of Champion Hill alongside a residential development. The stadium which will be built with the potential to expand the capacity to 5,000, will be leased to the Club on a long 125 year long lease. After all the former wranglings between the parties, which resulted in Dulwich Hamlet leaving Champion Hill and groundsharing with Tooting & Mitcham, then it is pleasing that a compromise to suit all parties has been reached. It is likely that the new ground will have a 3G artificial pitch. More information about the proposals can be found on the Champion Hill Proposals  website.

Dulwich Hamlet are a well-supported club, which can make for a good atmosphere. Normally visiting fans are made welcome and a sign of this is that fans are very rarely segregated at the ground. You can also enjoy some Carribean Cuisine inside the stadium from the 'Shak';  the same people who have their legendary food place at Tooting & Mitcham FC, where Dulwich Hamlet were groundsharing for a while. There is also a large Sainsbury's Store nearby that has a Starbucks and a cashpoint.

There is a club house at the ground which welcomes away fans. Otherwise, if you turn right out of East Dulwich station, then there is the Cherry Tree pub down on the left.

Leave the M25 at Junction 7 and take the M23 towards London. At the end of the M23 take the A23 towards Croydon. Continue along the A23 towards Central London through Croydon and then Streatham. On reaching the junction with the South Circular A205 turn right towards Dulwich. After passing Dulwick Park on your left, turn left onto Lordship Lane (A2216) towards East Dulwich. Go through East Dulwich and go straight on when you come to a roundabout. You will pass East Dulwich station on your left. And then just past the small park on your left turn left into Sainsbury's. The ground is located to the left of the store. There is a small car park at the ground, otherwise street parking.

East Dulwich Railway Station is around 200 yards from the ground and is only around a 5-10 minute walk away. It is served by trains from London Bridge. As you leave the station turn left along the main road and just before the East Dulwich Fish and Chip Shop, turn left into St Francis Road. At the end of this road proceed along the short pathway in front and then turn right into Abbotswood Road. The club entrance is along this road on the left next to the Sainsbury's Supermarket.

Concessions apply to: Over 60's, Under 20's, Full Time Students, the Unemployed and current members of the Armed Forces and Emergency Services and Local Authority Employees. Relevant ID may be required to be shown as proof of status.

Map Showing The Location Of The Champion Hill Ground In London

If there is anything that needs to be updated or if you have something to add to this guide to Champion Hill Dulwich Hamlet then please email me at: contact@footballgroundguide.com.

Special thanks to Geoff Jackson for providing some photos of Champion Hill Dulwich Hamlet. Check out Geoff's Cumbrian Groundhopper blog.