Arbour Park still has that 'shiny new' look, having been opened in late 2016. Normally most new builds nowadays are fairly boring affairs, but pleasingly Arbour Park is a little different, mainly down to the smart looking Main Stand on one side of the pitch. From the outside, this stand that runs around half the length of the pitch and sits astride the halfway line is particularly eye-catching with a central column flanked by two semi-circular metal facades. The curves continue over the roof, extending over the 250 seats below. This seating area is comprised of eight rows. With no supporting pillars to contend with and with the rake of the stand being quite steep, then supporters can enjoy fine views of the playing action. Even the team dugouts are located on each side of the stand rather than the normal in front position. Behind the seated area, there is a tall glass frontage, which further enhances the overall look. Interestingly on either side of the stand are raised outdoor areas, that have a number of tables and chairs. I am not sure if fans using the Main Stand have access to these areas or whether they are for corporate use, but nevertheless they a nice touch and a bit different to what you normally see at grounds.

Opposite the Main Stand is the East Stand. This small covered all seated stand is four rows high and runs for around a third of the length of the pitch, on the halfway line. It has a small curved roof. Both ends have small covered terraces that more or less extend the full width of the pitch. They are prefabricated in nature meaning that the terrace steps and retaining back wall are made of metal. The North End is the home end of the ground and is overlooked from behind by a large HEA office block. In the North East corner of the stadium, there is a rather tall telephone mast, so I trust you can get a good WiFi signal inside the ground! Arbour Park is completed with a set of eight floodlights, four of which run down each side of the ground. There is also a small electronic scoreboard in this corner of the stadium.

The opening of Arbour Park in December 2016, was a major milestone for the Club, finally returning to their Slough hometown after an absence of 13 years. They had vacated their former Wexham Park ground in 2003 and had been forced to groundshare elsewhere until Arbour Park was built. 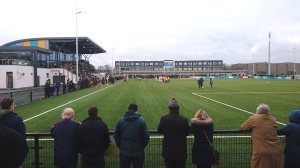 For most games at Arbour Park then fans are not segregated. If segregation is in place then visiting supporters are mostly housed in the South Terrace at one end of the stadium. This covered terrace comprises six rows and has a capacity of around 700. In addition, a number of seats which are also undercover are made available to away fans in the East Stand. Although the ground looks good it is lacking in facilities, especially when segregation is in force. For example, toilets and food/drink outlets are brought in for the match. On my visit, there was a reasonable atmosphere inside the ground and the welcome friendly, with the stewards taking a relaxed approach. Although I thought it was amusing that due to the low stadium perimeter fence on the Main Stand side of the stadium, it was quite easy to peer over it from the car park and watch part of the game for nothing. The stadium is a completely no smoking/vaping one. However, stewards will allow fans to exit the stadium and re-enter if they need a smoke. In my case, the steward used a biro pen to mark a cross on the back of my hand as a sign that I had already paid to get in. It may be a modern ground but…..

There is a bar in the Main Stand that away supporters can use if the match is not segregated. This bar serves real ale from the Rebellion Brewery and fans are able to enjoy the outside elevated veranda, that overlooks Arbour Park. For bigger games, where a large away following is expected. then a basic outside bar is provided in the away section which serves beer up to 15 minutes before kick off. The nearest pub is the Lemon Tree on Shaggy Calf Lane, around a 5-10 minute walk away from Arbour Park. Otherwise, Slough Town Centre is around a 15-20 minute walk away, where there are plenty of pubs to be found, including a Wetherspoons outlet located on the High Street called the Moon & Spoon.

From the M4
Leave the M4 at Junction 6 and then head towards Slough on theA355, go straight through roundabout until you reach a main set of lights. (A4) then turn right and head East towards Slough Town Centre on the A4 for approx. two miles. At the main set of lights turn left onto B416 signposted for slough cemetery & crematorium then follow this road you will go through several sets of lights an Arbour Park will be on your right.

Car Parking
There are a limited number of spaces available at Arbour Park itself, on matchdays, which are free. Parking is also available at the nearby Lynch Hill Enterprise Academy, off Stoke Road (SL2 5AY). For some larger games then free parking is also made available to visiting supporters at St Joseph's School (SL2 5HW), the entrance to which is off Shaggy Calf Lane. Otherwise, use a town centre car park and walk to the ground (around 15-20 minutes) or street parking, but not along Stoke Road that runs past the ground.

Thanks to John Aitken for providing the directions.

Slough Railway Station is located around 3/4's of a mile away from Arbour Park. The station is served by trains from London Paddington. To walk to Arbour Park from the station should take around 15 minutes. Turn right out of the main station entrance and walk up to the main road, passing Slough Bus Station on your left, (where you can if you wish, catch a Redline Number WP1 bus from Bay 13 with the destination of Wexham Park Hospital to Stoke Road at Calf Lane for the ground). At the top of the road then turn right along the main Stoke Road (signposted Gerrards Cross B416). Keep on straight along Stoke Road and you will eventually reach Arbour Park on your right.

* Under 5's are admitted free. Under 13's must be accompanied by an adult.

Find and book your Hotel in Slough or nearby and help support this website!

If you require hotel accommodation in Slough or nearby then first try a hotel booking service provided by Booking.com. They offer all types of accommodation to suit all tastes and pockets from; Budget Hotels, Traditional Bed & Breakfast establishments to Five Star Hotels and Serviced Apartments. Plus their booking system is straightforward and easy to use. Yes this site will earn a small commission if you book through them, but it will help towards the running costs of keeping this Guide going.

Map Showing The Location Of Arbour Park In Slough

If anything is incorrect or you have something to add, then please e-mail me at: contact@footballgroundguide.com 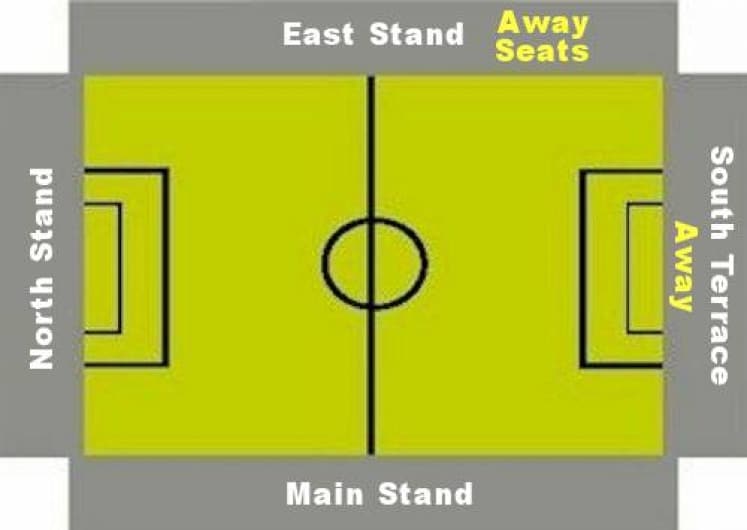