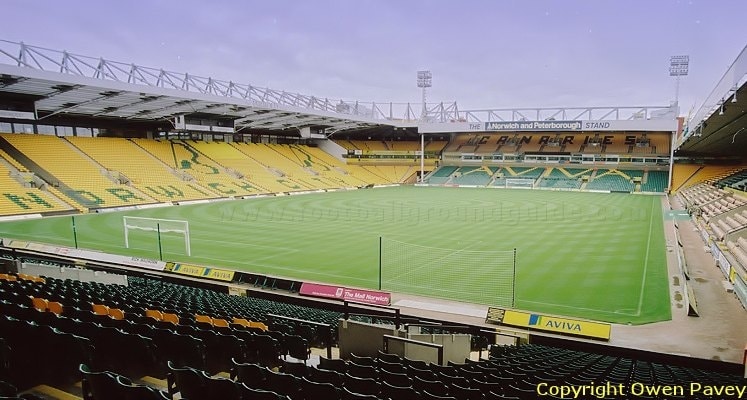 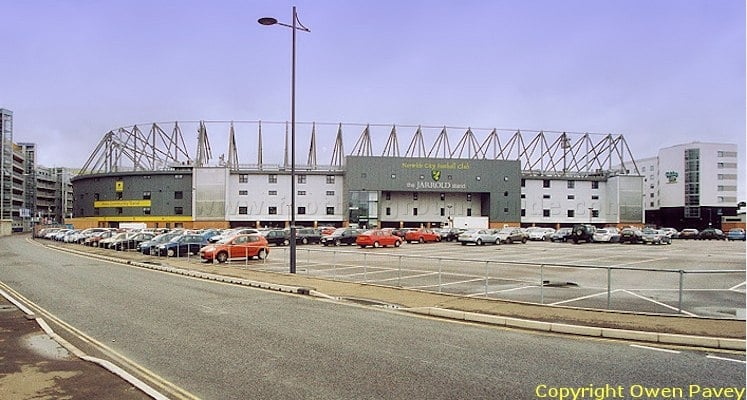 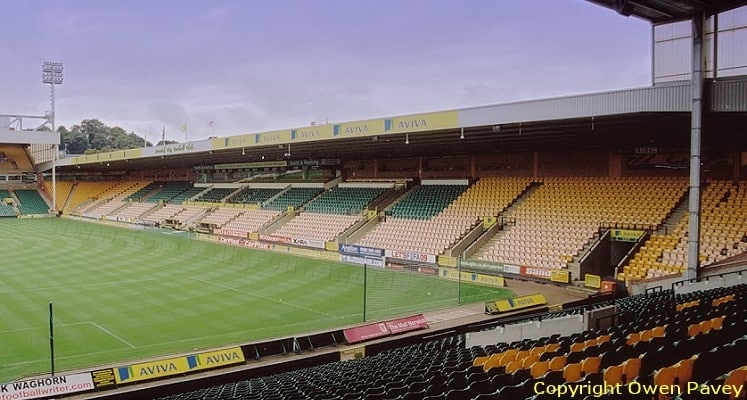 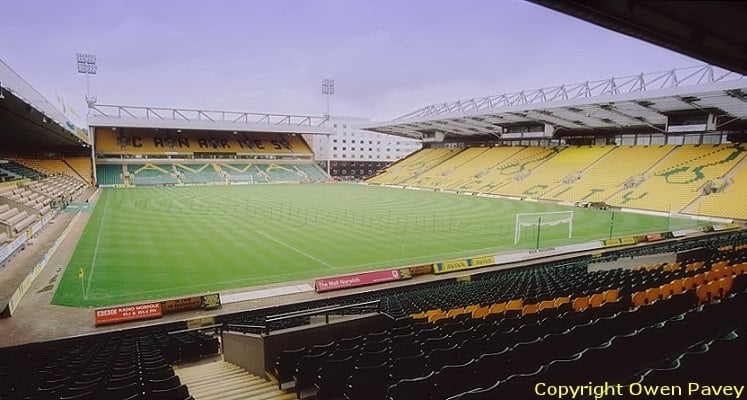 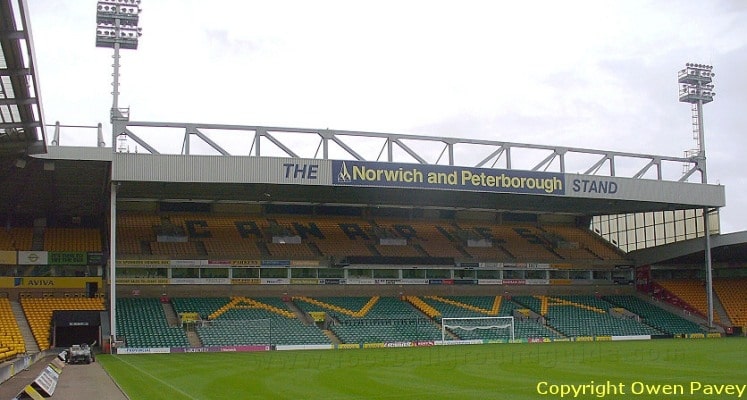 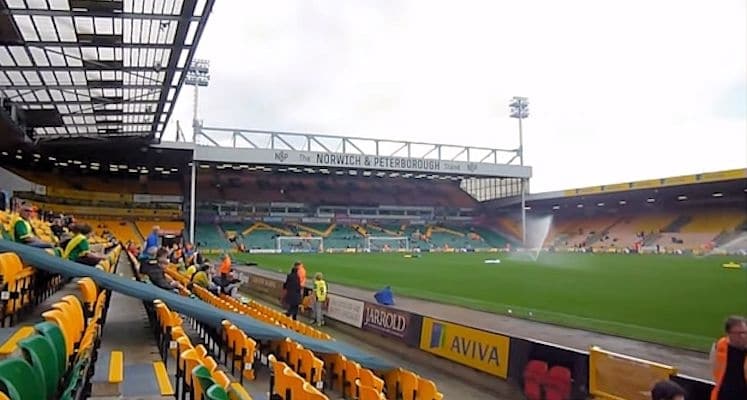 On one side of the ground is the South Stand that was opened in 2004. This is an impressive looking cantilever, single tier, all seated stand, that can house up to 8,000 supporters. It is has a large television gantry suspended beneath its largely perspex roof. This stand was further extended in 2005 and now surrounds the corner of the ground where it joins the River End, ‘filling in’ that area. The rest of the ground is also all seated and all stands are covered. Both ends look particularly smart, being large two-tiered affairs, complete with a row of executive boxes and distinctive pairs of large floodlight pylons protruding from their roofs. The first of these to be built was the River End in 1979, with the Barclay End opposite which opened in 1992.

On the remaining side is the Geoffrey Watling City Stand. Named after a former club president and opened in 1986, this single tiered stand is smaller than both ends and houses amongst other things the Directors Box and Press Area. This stand extends around to meet the ends at both corners, giving the ground an enclosed look on that side. In one corner in-between the Barclay End and South Stand, the stadium is overlooked by a sizeable Holiday Inn Hotel. Also at this corner, the Club have installed the World’s first (for a football ground) revolving LED big screen. That should make your eyes boggle! David Westgate adds; ‘The corner in-fill between the Barclay Stand and the Geoffrey Watling City Stand is affectionately known to Norwich fans as the “Snake Pit!”

Back in 2019 a couple of strips of land were purchased directly outside of Carrow Road with a figure of £500k muted, however, nothing has actually kicked into work with these areas. It is not believed that any building will take place on the aforementioned plots of land. Why did they bother? Essentially, there are plans to add further tiering to the nearby stands, however, under building legislation the club wouldn’t be able to develop an ‘overhang’ above ground they don’t own thus explaining the relatively minor investment. When the work will actually start we don’t know but at least the planning and design should be significantly easier now.

Norwich have played their home matches three stadia throughout their history. The first was Newmarket Road with a move to ‘The Nest’ following fairly quickly. Even that stay was short lived though such was the demand owing to the relative lack of choice for football in the area. In 1935 Carrow Road became home. It’s remained home since then but has seen a fair few revamps over the years. On first opening, three of the four stands were open air with one being covered.

The stadium could host 38,000 people, which is around 13,000 above the maximum at the Nest. The Norwich City ground remained as it was – with the exception of things like floodlights – all the way through to enforced changes in 1979. Those changes came about off the back of the Ibrox disaster, which had occurred at the start of the decade. Seating became the big push and the capacity at Carrow Road was squeezed rather dramatically with it being cut almost in half. By the mid-eighties further works were needed on Norwich’s stadium with fire destroying a stand; it had to be rebuilt and took several years to complete the safely executed demolition and rebuild.

Following another football stadium disaster – Hillsborough – all seating was to become the norm in English elite football. Carrow Road was no different. A decade passed with no alterations but then two in fairly quick succession followed. 2003 saw a new stand built in the south, which would hold pushing 10,000 fans and in 2010 another 1,000 seats were shoehorned in around existing areas.

Away fans are housed on one side of the South Stand, on one side of the ground. As you would expect from a modern stand the facilities and view of the playing action are good. The normal allocation in this area is 2,500 fans although this can be increased further for cup games. If you are located at the very back of this stand then you can enjoy some fine views across the city, including Norwich Cathedral. The Club I found to be particularly friendly and relaxed. I certainly would rate it as one of the better away days, even though it seems an eternity to get there. Alas, the days of the Club producing its own range of pies have long since gone instead you can enjoy the standard range of Pukka Pies and Pasties; Steak, Chicken Balti, Beef & Veg, Veggie Tikka Masala (all £3.50), plus Sausage Rolls (£2.50) and Gourmet Hot Dogs (£3.50). Coffees cost £2.50, whilst Tea/Bovril/Hot Chocolate are £2 each.

Tom Jameson a visiting Sheffield United fan informs me; ‘I recently visited Carrow Road and found it to be a pleasant, relaxing atmosphere which made for a very enjoyable day out. The stand is very modern, and offers a decent view of the action with plenty of leg room. One problem I did encounter was the tendency of the stewards to order away supporters to keep seated throughout the game. This led to our fans singing ‘Sit down, if you hate Wednesday’ instead of the usual ‘Stand up, if you hate Wednesday’ and ‘Sit down, stand up, which did not go down too well with the stewards who in my mind very harshly ejected one supporter from the stadium. So it is advisable to comply with the steward requests, although I did find it all rather annoying’. If you hear the Norwich fans sing ‘On The Ball City’ then apparently this has been sung by Norwich fans since 1902!

Around a five minute walk away from Norwich Railway Station and a 15 minute walk away from Carrow Road is the Stadia Bar on Upper King Street. This bar welcomes visiting supporters and shows Sky and BT Sports on over 20 screens (see advert below). There is also the Waterfront on King Street. This live music venue/nightclub is now open on matchdays exclusively for away fans.

Dave a visiting Birmingham City fan adds; ‘In the City Centre then the pick of the pubs for me was the aptly named St Andrews Brewhouse which brews its own range of beers and ciders. Also The Wildman on Bedford Street, and The Lamb Inn near the market with its massive beer garden are worth a mention’.

The Stadia Bar on Upper King Street is one of the best Sports Bars in Norwich and is happy to admit away supporters. Showing Sky and BT Sports on over 20 screens then this is the perfect place to watch the early kick off, before making your way onto Carrow Road. Opening at 12 noon on Saturdays, this family-friendly pub, offers a range of drinks. Although the bar does not offer food at the moment, visitors are welcome to bring in their own, including takeaways. Stadia Bar Location Map. Address: 19 Upper King Street, NR3 1RB, Norwich. Tel: 01603 327801.  Website: www.stadianightclub.co.uk. The Stadia Bar can also be found on Facebook and Twitter.

The ground is well signposted from the A11 and A47. From the southern bypass (A47) take the A146 into the city. At the traffic lights turn right towards the city centre on the A1054. At the next roundabout stay in the left-hand lane and continue towards the city centre along the A147. At the next set of traffic lights, turn right into King Street. This street as it bends around to the right and crosses the river becomes Carrow Road, the ground is further down on the right.

David Clarke informs me that ‘The best car park for away fans is Norfolk County Hall, which is well signposted on the left of the A146, as you follow signs towards the ground from the Southern Bypass. It is currently £8 and can hold about 2000 cars, and does usually fill up by 2pm for games where the away team bring loads of fans’. After the match the car park is well marshalled with two streams of cars exiting it, so normally you are not held up for too long.  There is also the option of renting a private driveway near Carrow Road via YourParkingSpace.co.uk.

After the game has ended some roads are closed to allow the crowd to disperse quickly and safely. For details of precisely which roads are closed, visit the Norwich City Council website.

Carrow Road ground is walkable from Norwich Railway Station. If you ignore all those wonderful pubs it should take you no more than 10 minutes to walk to the ground. From the station turn left and head for the Morrisons supermarket and you should see the ground behind that.

All areas of the ground:

Norwich vs Ipswich rivalry: The tag of ‘The Old Farm’ derby might earn a chuckle from many a football fan with the play on the fiery rivalry between Rangers and Celtic in Scotland but, make no mistake about it, Norwich and Ipswich fans don’t see the funny side; they’re not too fond of each other. East Anglia is, for most, a painful away trip. For these two clubs it is home and with the duo spending large chunks of time competing at similar levels in the pyramid their matches have regularly had points on the line.

Norwich itself is a beautiful city, with plenty of history to be seen and a nice river flowing through it. So if you have a chance get there early and go for a pleasant wander around the centre stopping at the occasional watering hole along the way. Great Yarmouth is not far away on the coast so why not make a weekend of it?

If anything is incorrect or you have something to add then please e-mail contact@footballgroundguide.com and I’ll update the guide.

Special thanks to Owen Pavey for providing the photos of Carrow Road Norwich City.