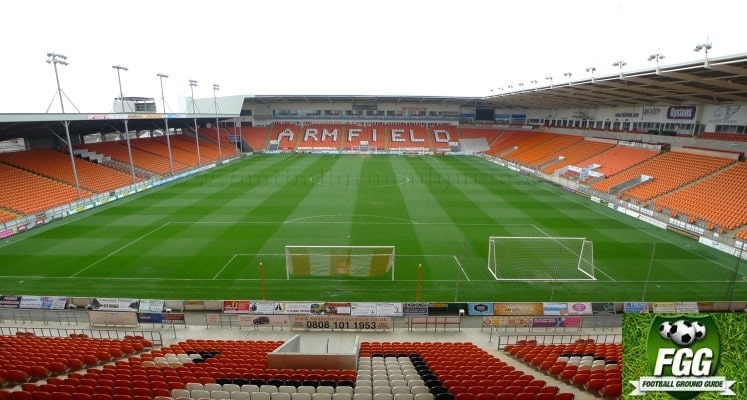 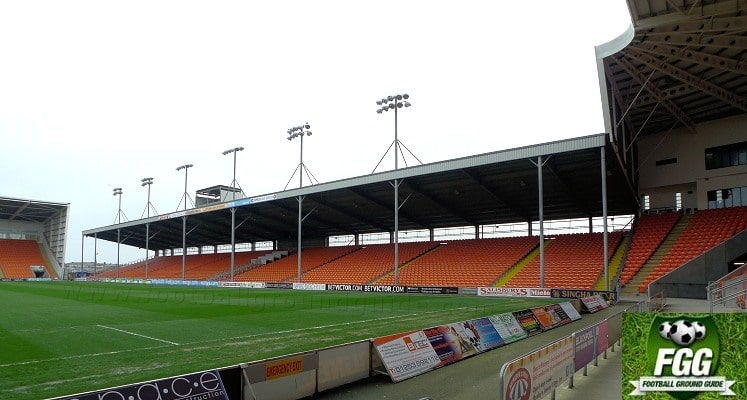 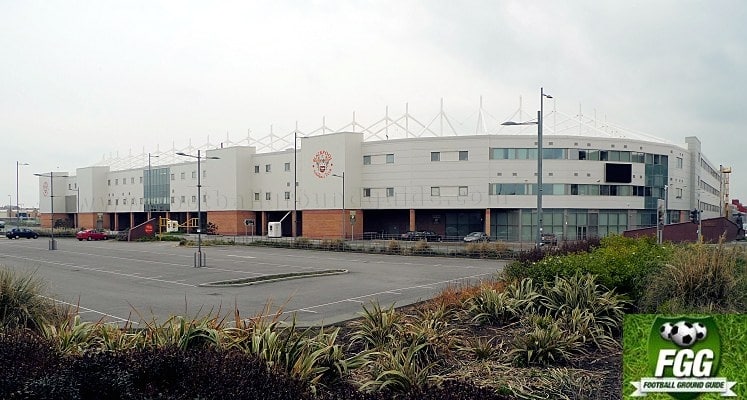 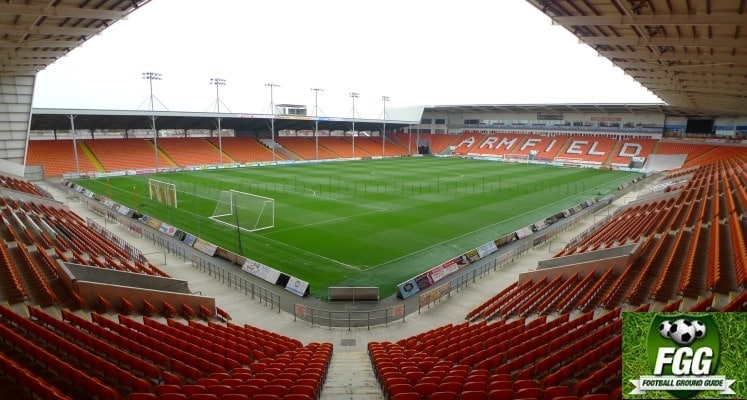 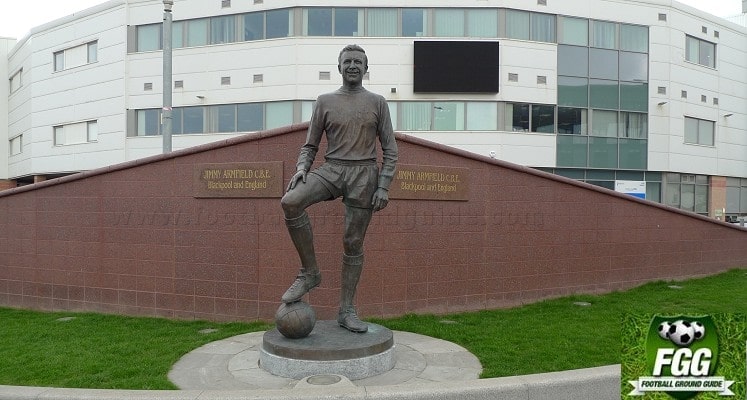 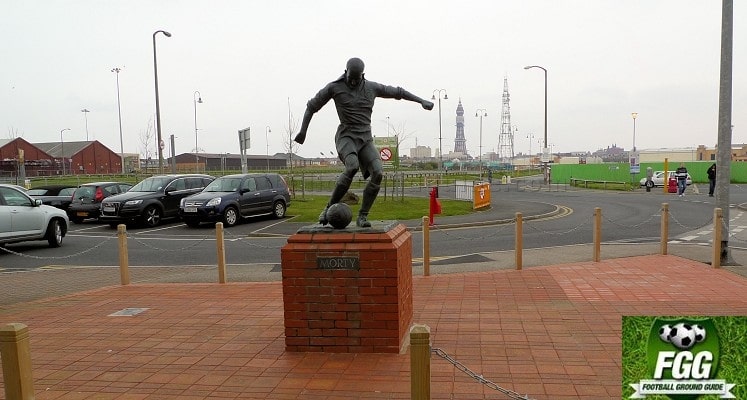 Bloomfield Road has modern stands on three sides with the corners in-between these stands also filled with seating. These three permanent sides are of similar design, being single tiered, all of the same height, seated and covered. The Stanley Matthews (West) Stand on one side of the stadium and the Mortensen Kop (North Stand) at one end, were both opened in 2002. Behind the main seating in the West Stand and the North West corner, is a hospitality balcony with executive boxes at the rear from the south end to the Directors’ Box at the halfway line, from which point to the North West corner is the Sir Stanley Matthews Hospitality Suite.

The Armfield Stand at the South End is named in tribute to the Blackpool legend, Jimmy Armfield. Opened in 2010 and is a mirror image of the North Stand at the other end. It has a capacity of 3,600 seats. On the East side of the ground, there is a ‘temporary’ stand, which has now been there since 2010. Although temporary it is of a good size housing some 5,120 fans in a single tier of seating and is also covered. The only main drawback is that it has a number of supporting pillars running across the front of it. Situated in one corner of the ground between the West and South stands is a large video screen.

Away fans are now housed once again on one side of the ‘temporary’ East Stand on one side of the pitch, where up to 2,500 supporters can be accommodated. This stand is sometimes shared with home fans for bigger matches, with away fans being housed on the southern side. Although the stand is covered there are a number of supporting pillars running along the front of the stand that could hinder your view. If you find that you are sat towards the middle of the stand, then you will have the ‘added comfort’ of padded seats, although the Club does charge extra for this privilege. The front four rows of the stand are netted off and unavailable, this is due to the weakened floor which is to be replaced at some point.

Although away fans are housed in this temporary stand the facilities for visiting supporters, food & drink outlets, toilets etc. are housed in the more permanent Armfield Stand, at the south end. Fans access these by walking along the front of the East Stand and through the access tunnel into the back of the Armfield Stand. Food inside ground includes a range of Pies; Meat & Potato, Steak, Cheese & Onion (all £2.60), Sausage Rolls (£2.20) and Hot Dogs (£3), whilst hot drinks cost £2. The entrance to the away section is from Bloomfield Road.

Popular with away fans is the Old Bridge House pub on Lytham Road. It is only a short walk away (walk down Bloomfield Road towards the seafront and then turn right into Lytham Road and the pub is down on the right). Just a little further along Lytham Road on the corner with the seafront is the Manchester Bar, which welcomes away fans and wearing colours is not a problem. This pub has large screens showing Sky Sports and normally has a DJ playing loud music, who tries his best to entertain the visiting fans. However, the bar prices are quite high by Blackpool standards. Also on Lytham Road (but this going in the direction of the Pleasure Beach) is the Albert Pub which normally has a good mix of home and away fans in attendance. This pub also shows BT and Sky Sports.

Steve Gardner a visiting Gillingham fan informs me; ‘A good family pub close to the ground is the Waterloo in Waterloo Road – genuinely family-friendly except in the games area. Clean, comfortable and friendly; Sky TV on large screens and reasonable, inexpensive food’. Whilst Rob Pickett a visiting Oxford United fan recommends ‘Only a seven minute walk away from the ground going up Bloomfield Road, is the Bloomfield Brewhouse. It is a civilised place with good beer and reasonable food.’ It has real ale available, including some beers that it brews itself in its own microbrewery and has Sky Sports.

If you are a fan of Wetherspoons pubs than on the seafront near to the Pleasure Beach is the Velvet Coaster. When opened in 2015 it was the largest Wetherspoons outlet in the country and it is an impressive place. It is though a good twenty minute walk away from Bloomfield Road.

Otherwise, there are plenty of pubs in Blackpool town centre to choose from. Alcohol is also made available to away supporters inside the stadium in the form of; Lager, Smooth Bitter and Cider (all £3.20 a pint), Bottles of Lager (£3) plus Wine (Red, White, Rose, 187ml bottle £3).

In the early part of 2021 it was announced that Blackpool Football Club wanted to launch a ‘town deal’ in conjunction with the local authority to a) enhance the Blackpool stadium with a new East Stand, which has been a desire for over a decade and b) bring further development to the surrounding area; this would include community pitches, sports facilities and retail space.

Blackpool have been playing their home games at Bloomfield Road since 1901 but for 14 years beforehand they hosted games elsewhere. Raikes Hall, an old seaside theme park, was one such home whilst the generically named ‘athletic grounds’ at Stanley Park was another field Blackpool called their home patch. Eventually, Bloomfield Road became home and so it has remained. In the early days at Bloomfield Road, games would be played in front of 300 fans who were sat in a wooden stand whilst others could gather to stand around the pitch; a fence around the pitch perimeter would ensure they stood back from the touch lines.

Fast forward to 1925 though and things looked quite different; there was a press box, multiple stands and the capacity stood at 20,000. Jump forward in time again to 1955 and the Blackpool stadium was holding its record attendance of over 38,000 fans. It was a peak capacity reached through a number of developments made in the 30 years prior. The next decade saw more seating introduced, which reduced the capacity and, from there, things remained largely static until the 2000s when a revamp took place; it’s very similar today.

Leave the M6 at Junction 32 and take the M55 to Blackpool. Then at the end of the M55 continue straight onto the A5230 and then Yeadon Way towards Blackpool town centre. The ground which is signposted from here, as the road leads into Seasiders Way, you will reach on the right hand side. A huge pay and display car park is located to the left of Seasiders Way, which stretches all the way from near the Blackpool South station up to the ground. It costs £3.50 for three hours or £6 for up to six hours (some of the pay machines also accept credit/debit cards). Matthew Stimpson informs me; ‘Please note that unlike most towns and cities in England the pay and display car parks near to the ground still charge after 6pm. Some visiting fans on my visit assumed that they would be free after 6pm and ended up with a parking ticket’. Otherwise street parking (although there are restrictions in the immediate vicinity around the ground). There is also the option of renting a private driveway in the local area via:  YourParkingSpace.co.uk.

There are 40 parking spaces available in the St Cuthberts Church Car Park in Lytham Road, which is only a five minute walk away from the ground. It is pay-and-display, costing just £3 for three hours, £4 for five hours, or £7 for all day. The Church address: 177 Lytham Road, Blackpool, FY1 6EU. Location Map.

Mark Gillatt adds; ‘For anyone arriving by train at Blackpool North a cheaper alternative than a taxi may be the number 11 bus from the bus station across the road. Buses to Lytham St Annes pass the end of Bloomfield Road and run every 15 minutes. Fans should alight at the Old Bridge House pub (okay for a pint) and walk down Lonsdale Road to the ground’

* Under 11’s have to become a Young Seasiders Club member to qualify.

Your everyday football fans might not recognise this game as a big one but diehard fans do and the followers of each club certainly do. The two have locked horns for over a century now and their close proximity of one another, which sees them separated by the M55, means things can get tasty. Although their clashes are geographically spiced, the presence of two footballing greats – Stanley Matthews and Tom Finney – in the fifties added something extra to the game with each team claiming the had “the best”. Those talents no longer exist in the squads but the Donkey Floggers (Blackpool) vs the Knobbers (Preston) still brings about a serious buzz up in West Lancashire.

Blackpool’s games against Burnley do come with a little bit extra to them with the clubs separated by under an hours worth of driving; it’s not particularly volatile though with things predominantly taking on a banter like atmosphere.

Blackpool is not Britain’s premier seaside resort for nothing, so why not make a weekend of it? If you’re feeling brave try the UK’s largest and fastest roller coaster, ‘The Big One’ at the Pleasure Beach. I braved it, but was in shock afterwards! So much so that I had to seek out the Pleasure Beach bar for medicinal purposes. Only one word of caution, look at the other fixtures on the same day in Manchester/Bolton/Preston etc.. as your game, because other away supporters attending these games will also be probably be heading to Blackpool after the game. So if there is a particular group of supporters from another club who you would rather avoid, my advice is to stay away. 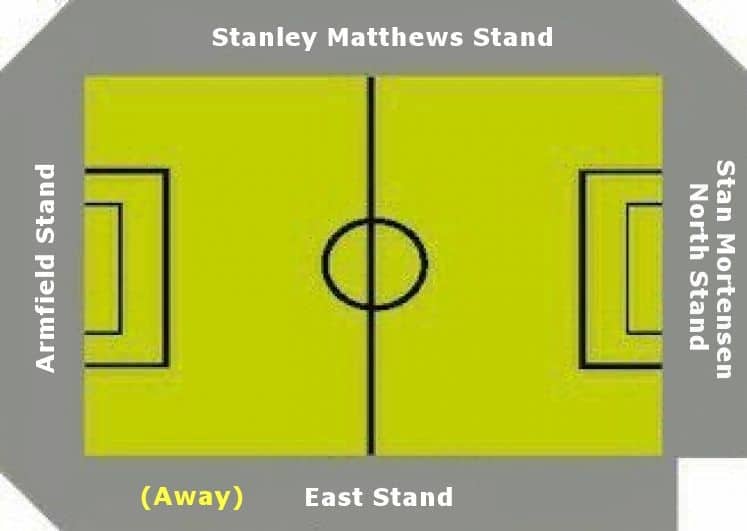