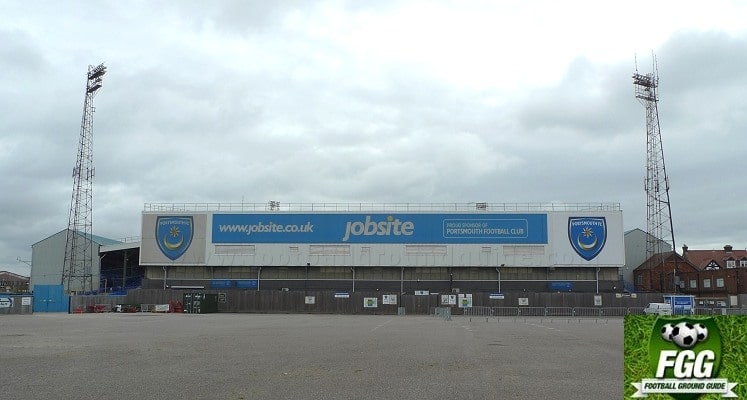 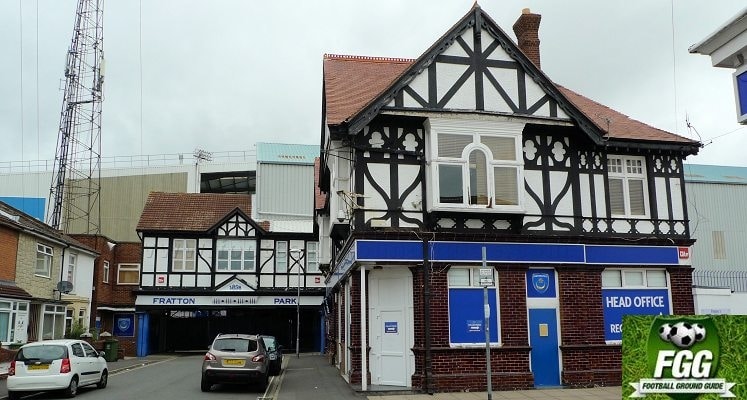 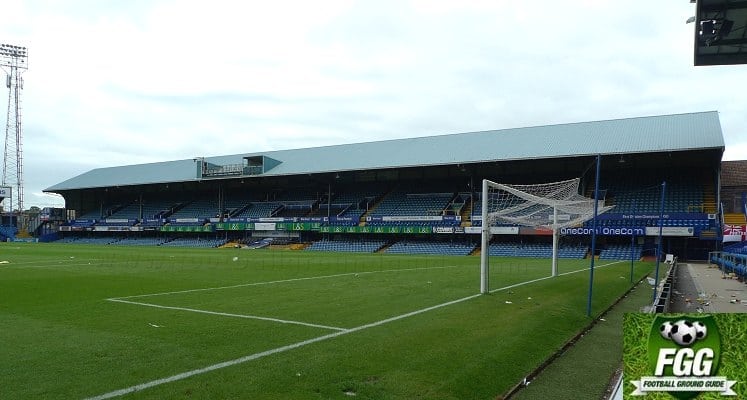 Fratton Park is a traditional looking ground and one which oozes character. Both side stands are two-tiered and originally had terracing at the front, which has now been replaced with seating. The South Stand dates back to 1925 and was originally designed by Archibald Leitch who also designed a number of grounds and stands around this period. Although showing its age in parts, it has plenty of character with an old fashioned looking media gantry perched on its roof and raised team dugouts at its front. Opposite the North Stand opened in 1935, looks somewhat plain and functional. Both the North and South Stands are two-tiered and have a number of supporting pillars.

At one end is the Fratton End, which is a more modern single tiered stand that was opened in 1997. It is of a good size and is the tallest stand at the ground. The seating in this stand contains an outline resembling a former player, Jimmy Dickinson, who still holds the record for the most club appearances. Opposite is the recently covered Milton End, which is all seated. Part of this stand is given to away fans. On one corner of this stand by the away supporters is a Police Control Box that also has a large video screen perched upon its roof. The ground is completed with a superb looking set of tall floodlights that were first used in 1962.

Outside the stadium on one corner of the South Stand, is the unique (in terms of football grounds) and eye-catching mock tudor facade, which contains the club ticket office and a stadium entrance.

Portsmouth have submitted plans to extend the Milton End, including 400 seats and more spectator facilities. This will also involve extending the roof area. Works could start at the end of this season. For more information see the News Section.

Away fans are normally housed on one side of the Milton End (on the North Stand side) where the normal allocation is 1,400. If demand requires it, then the whole of this end can be allocated, raising the allocation to 2,800 seats. Although this end now benefits from having a cover, the facilities within are pretty basic and the leg room tight, as this stand was a former terrace that has been converted to all seating. There are also some supporting pillars along the front of the stand that may impede your view. On a positive note, away supporters can really make some noise from this stand, further contributing to what is normally a great atmosphere, which is further aided by a drummer and bell ringer in the Fratton End.

Although this end is shared with home supporters, the Pompey home support gets behind their team but generally in a non-intimidatory way towards the away contingent. Fans were literally separated by a netted area only three seats wide, but on my last visit, there were no problems whatsoever. Entrance to the stand is gained by inserting your ticket into a bar code reader. If you have not pre-purchased a ticket for the game, then allow yourself plenty of time as the ticket booth is located at the opposite end of the ground to the away end. On the whole, though try to sit back and enjoy Fratton Park such older grounds now are becoming few and far between with the advent of new stadia being built.

Chris Saunders a visiting Middlesbrough fan adds; ‘In terms of facilities the ground is light years away from Premiership standard, but the atmosphere is electric with the legendary ‘Play Up Pompey’ echoing around the ground.  The Portsmouth fans are a great bunch and made me most welcome. If you are feeling hungry then there is a McDonalds and KFC across the road from Fratton Park’.

Popular with away fans is the Good Companion pub, which is on the main A2030 about a five minute walk away from the ground. It is a large pub serving real ales and had a good mix of home and away support. I also noticed that it was doing a brisk business in food. Martin Hewitt recommends the Harvester, but advises away fans to avoid the Newcome Arms. On Milton Road close to the ground is the Brewers Arms which is popular with away fans. Close by is the Milton Arms, which at one time was for home fans only. However since a new landlord had taken over, it now welcomes visiting supporters. This pub also has the added advantages of showing the early televised kick off match on a huge screen and serving food (even having outdoor BBQs if the weather is good).

If you like your craft beers, then only a few minutes walk away from the visitor’s turnstiles is the Staggeringly Good Brewery. It has a taproom bar called the ‘House of Rapture.’ It also served wines, spirits and soft drinks and you are welcome to bring in your own food. It is located on Rodney Road, in Unit 3 of the St George’s Road Industrial Estate.

Derek Hall adds; ‘Found a cracking little pub, about a mile away from the ground, on Fawcett Road. It’s called (very appropriately) The Red, White and Blue. There are also a few other pubs – and plenty of takeaways (of all varieties) along this road. Friendly staff, friendly Pompey fans (chiefly, of the elder variety) and simple food fayre on offer. To reach the pub, you just head west from the ground, towards the Fratton Railway Station, along Goldsmith Avenue. Just past the station, you reach a roundabout – and Fawcett Road is immediately on your left’.

Pete Wood a visiting Doncaster Rovers fan informs me; ‘If travelling by train from London, then your return ticket from London Waterloo allows you to get off at either Fratton (nearest to the ground), Portsmouth & Southsea (best for pubs) or Portsmouth Harbour. What we did was have a drink in the two Wetherspoon pubs near Portsmouth & Southsea Station before getting the train back to Fratton for the match. You can catch a train back to Waterloo from Fratton after the game. The trains run every 20 or 30 minutes or so’.

Go along the M27 (ignoring the M275 turn off for Portsmouth town centre) and continue on to the A27. At the junction with the A2030 turn right towards Southsea/Fratton and just continue straight along the A2030 and eventually you will see the ground in front of you, just slightly to your left.

There is a large car park behind the Fratton End but this costs £10 per car. It can be accessed via Anson Road (PO4 8SX), but this is opposite to the away end so is probably not really suitable for away fans to use. The good news is that there are few parking restrictions in place close to the ground. So if you arrive early enough, you can normally find some street parking only a few minutes walk away. When I have visited, I have parked in one of the side streets, found on the right-hand side of the A2030 before you reach the Good Companion pub. Alternatively, Miltoncross School, which is a five minute walk from the ground offers parking at £5 per car. The school is located in Milton Road (post code PO3 6RB). Derek Hall adds; ‘There is also a very large car park (for a fiver) on the corner of Velder Avenue and Milton Road (a couple of minutes walk behind the away end)’. There is also the option of renting a private driveway near Fratton Park via YourParkingSpace.co.uk.

Thanks to Peter Coulthard for providing the directions.

* Please note that these ticket prices are for tickets bought in advance of matchday. Tickets bought on the day of the game can cost up to £2 more per adult ticket.

Portsmouth Hotels - Find and Book Yours And Help Support This Website

If you require hotel accommodation in Portsmouth then first try a hotel booking service provided by Booking.com. They offer all types of accommodation to suit all tastes and pockets from; Budget Hotels, Traditional Bed & Breakfast establishments to Five Star Hotels and Serviced Apartments. Plus their booking system is straightforward and easy to use. Yes this site will earn a small commission if you book through them, but it will help towards the running costs of keeping this Guide going.

Why not write your own review of Fratton Park Portsmouth and have it included in the Guide? Find out more about submitting a Fans Football Ground Review. 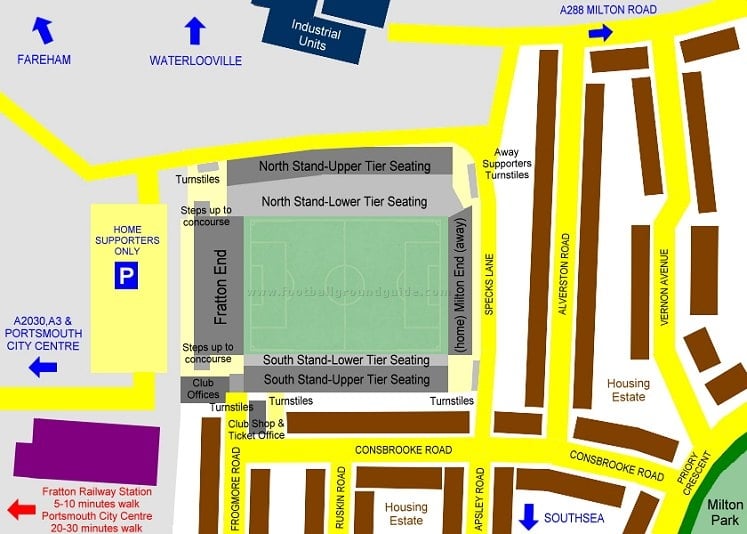