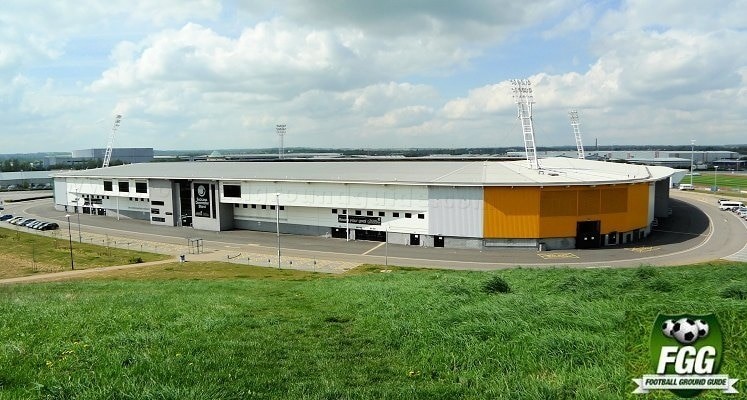 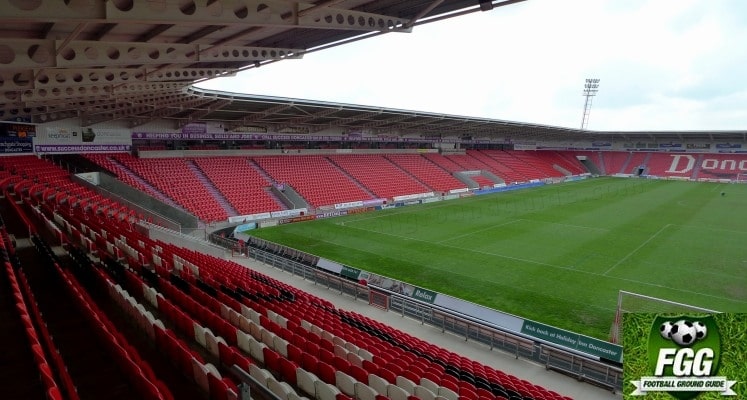 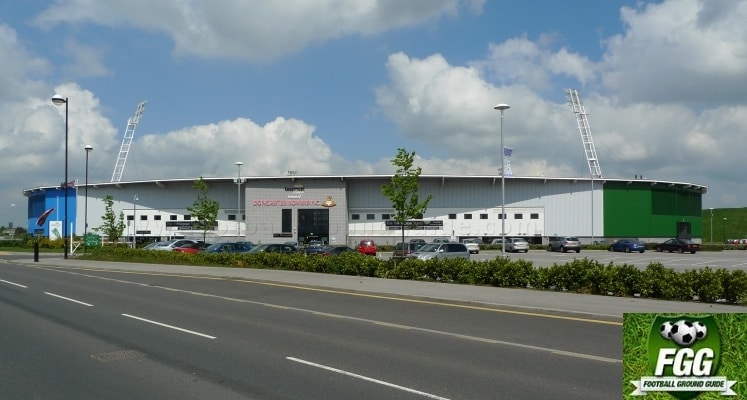 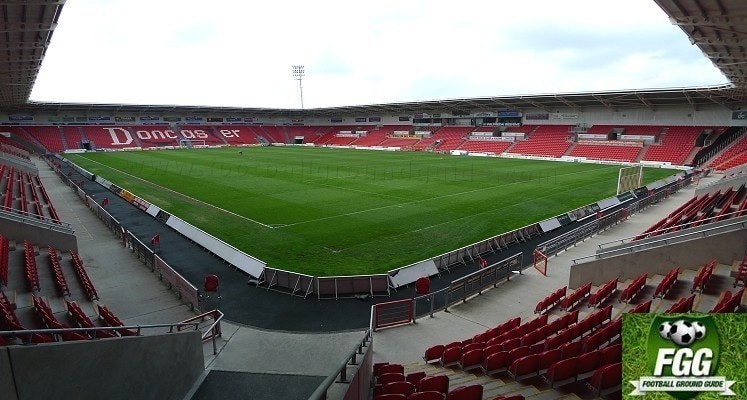 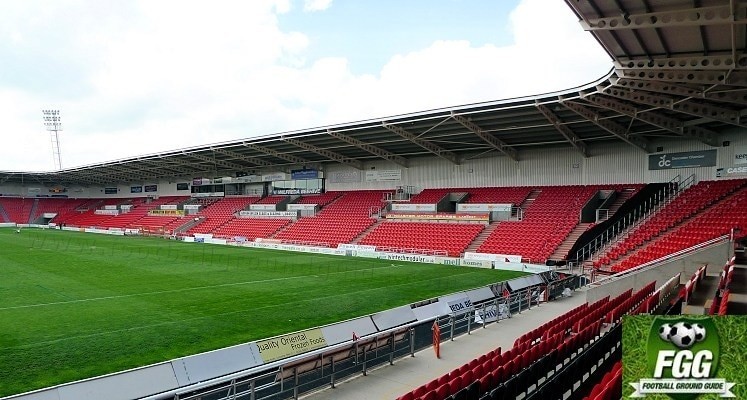 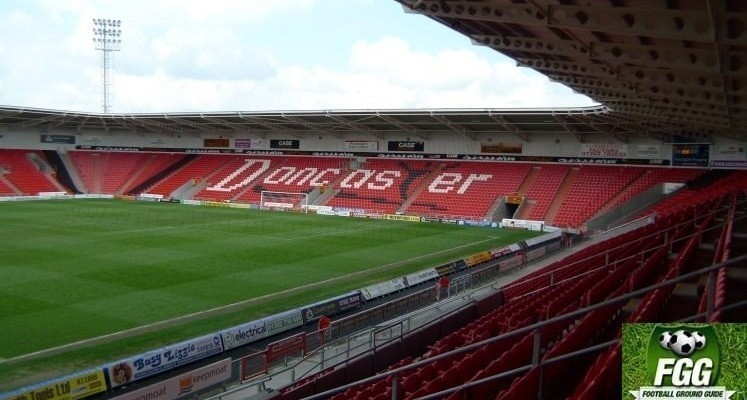 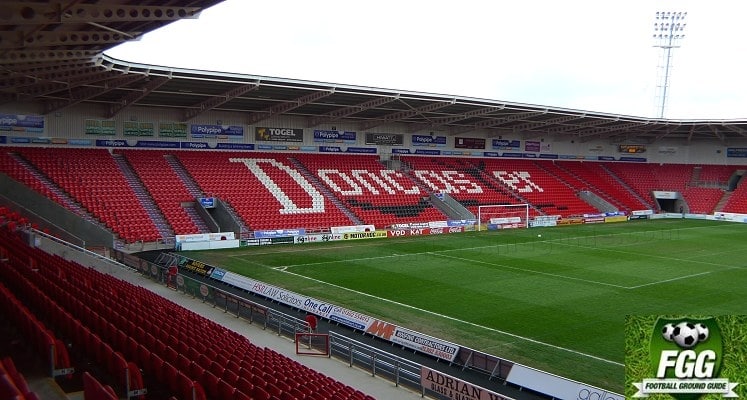 After 84 years of playing football at their old Belle Vue ground, the Club moved to the Keepmoat Stadium, which was opened on January 1st 2007. The Keepmoat stadium cost £21m to build and is also home to Doncaster Lakers Rugby League team as well as ladies football team Doncaster Belles.

To be honest the Keepmoat Stadium, in common with a number of new stadiums, looks far more interesting from the outside that it does on the inside. The stadium is situated next to a lake (which I believe makes Doncaster the only league ground to do so) and looks smart with four interesting looking floodlights, protruding at an angle from the stadium roof. However, on the inside, the stadium is rather non-descript. Yes, it looks tidy, the stadium is completely enclosed and all the covered stands are of the same height. But it lacks character and it is rather similar to other new stadiums that have been built, except that it is on a smaller scale.

On one side is the West Stand, which is the Main Stand, containing the teams' dressing rooms and having the players tunnel and team dugouts at its front. The primary television gantry is also housed on this side, along with press facilities. Opposite is the Doncaster Success Stand which contains a row of 16 executive boxes, outside which patrons can sit. These run across the back of the stand. Both ends are identical, with the North End of the ground being allocated to away fans.

Unusually the stadium has large access points in three corners of the ground, which can be used if need be, by emergency services. There is a large video screen located in the South West corner of the stadium. The ground is completed with a set of four floodlights which are mounted on the roof in each corner.

Away fans are located in the North Stand at one end of the stadium, where up to 3,344 fans can be accommodated. If demand requires it then a portion of the East Stand can also be allocated increasing the allocation to 3,700.

Like a number of clubs now, fans are searched on entry to the stadium. Cash is not accepted at the turnstiles so you will need to purchase a ticket beforehand. Inside the facilities are fine and the view of the playing action and legroom are both good, although fans are set well back from the pitch. The stewarding is usually unobtrusive and helpful. The low roof of the stand ensures that the acoustics are good allowing the away fans to really generate some noise. from this area.

The concourses are of a good size and there are a number of televisions on view to keep supporters entertained. These televisions show Sky Sports before the match. Food available includes a selection of Pukka Pies (including the Chicken Balti pie) at £3.20 each, plus Cheeseburgers (£4), Hot Dogs (£4) and Chips (£2.60).

Mark Chatterton a visiting Southend United supporter adds; ‘It poured down with rain at our last match and it was noticeable around the stadium that those people sitting in the front rows of the stands, got particularly wet.’ Fans who wish to smoke are allowed outside the stadium at half time.

Please note that cash is not accepted at the turnstiles, they are ticket only. Tickets for the away section can be purchased on the day from the Academy Reception in the North West corner of the stadium.

Outside the stadium there is a Fan Zone that has food and drink outlets, which both home and away supporters can access. Dave a Norwich City fan tells me; 'There is also the Belle Vue bar at the stadium itself, which we were allowed to go into. It does get very busy in the hour up to kick off but if you get in early, as we did, you should be okay. The bar has plenty of seating, as well as an organised queuing system to avoid the normal bustle at the bar'. The bar also has large television screens showing televised football.' Alcohol is also available inside the stadium, in the form of; Lager (£3.70), Bitter (£3.50), Cider (£3.70) and Wine (£4).

As the stadium is on the outskirts of town, then there is not much choice in the way of pubs nearby. There is the Lakeside, a Beefeater outlet near Stadium Way (you should catch sight of it, if you drive towards the stadium from Junction 3 of the M18). Chris Parkes a visiting Nottingham Forest supporter informs me; 'I had no problems with getting a drink in the Lakeside Beefeater, in fact, there were more Forest fans in there than home fans before the game. We were also allowed in after the game for a pint or two while the traffic cleared.' The pub also has a separate restaurant section. Whilst David Rose adds; 'There is a bar in the bowling alley next to the Vue Cinema, which is situated on the other side of the lake'.

If arriving by train into Doncaster Railway Station and you like your ale, then on Platform 3B there is the Draughtsman Alehouse. Whilst also in a five to ten minute walking distance of the station, are the Corner Pin, on St Sepulchre Gate West, the Leopard pub on West Street and the Doncaster Brewery Tap on Young Street. These pubs are listed in the CAMRA Good Beer Guide. Also near to the station is the 'Railway pub' on West Street, which is also popular with visiting fans.

Once on the M18, leave at Junction 3 and take the A6182 towards Doncaster (the stadium is well signposted from Junction 3 and is about one and a half miles away). You will pass a retail park on your left and then at the next island (which has the Lakeside Pub visible behind it) turn left onto White Rose Way. The Lakeside Shopping Centre is now on your right (the stadium is located directly behind the shopping centre). At the next island turn right onto the industrial estate and after passing the Tesco distribution centre on your right, turn right at the bottom of the road and the stadium is further down on your left.

There are just 1,000 car parking spaces at the stadium, which will mean that for the bigger games, parking will be at a premium. There are 60 parking spaces reserved for disabled fans, which must be booked prior to matchday. The stadium management are also giving preference for parking to those cars carrying more than one passenger, but apparently this won't be enforced. The cost of parking at the stadium is £5. Alan Wilson adds; 'Having parked at the stadium it took me nearly an hour to get out of the car park and back onto the main road after the game had ended'. Alternatively, a number of firms on the nearby industrial park, offer matchday parking at around £3-£4 per vehicle. If you happen to arrive a couple of hours before kick off then there is also some free street parking to be had in this area.

Away coaches are parked in Car Park number on the approach to the stadium. This is at a cost of £20. Coaches need to follow the stadium signs, then the entrance to the car park is directly ahead when you see the first group of car park stewards. There is also the option of renting a private driveway near in the local area via YourParkingSpace.co.uk.

Doncaster Railway Station is just under two miles away from the Keepmoat Stadium, so you are probably best taking a taxi to the ground.  If you do have time on your hands and you fancy the long walk (around 25-30 minutes) then as you come out of the station turn right and then keep straight on this road (the A 6182 Trafford Way) and you will eventually reach the Keepmoat Stadium complex on your left. Peter Wood informs me; 'You can catch First Bus Number 56, from the Doncaster Interchange bus station, which is adjacent the train station and under the Frenchgate Shopping Centre. Leaving from stand A3 (destination Rossington) it runs every 15 minutes on Saturday Afternoons. See the Travel South Yorkshire website to. The journey time is around 15-20 minutes'.

Doncaster Hotels - Find and Book Yours And Help Support This Website

If you require hotel accommodation in Doncaster then first try a hotel booking service provided by Booking.com. They offer all types of accommodation to suit all tastes and pockets from; Budget Hotels, Traditional Bed & Breakfast establishments to Five Star Hotels and Serviced Apartments. Plus their booking system is straightforward and easy to use. Just input the dates below that you wish to stay and then select from the map the hotel of interest to get more information. The map is centered to the football ground. However, you can drag the map around or click on +/- to reveal more hotels in the Town Centre or further afield.

Map Showing The Location Of The Keepmoat Stadium, Railway Station And Listed Pubs Warning: Invalid argument supplied for foreach() in /var/www/footballgroundguide.com/htdocs/wp-content/plugins/wordpress-popular-posts-nsn/src/Query.php on line 475