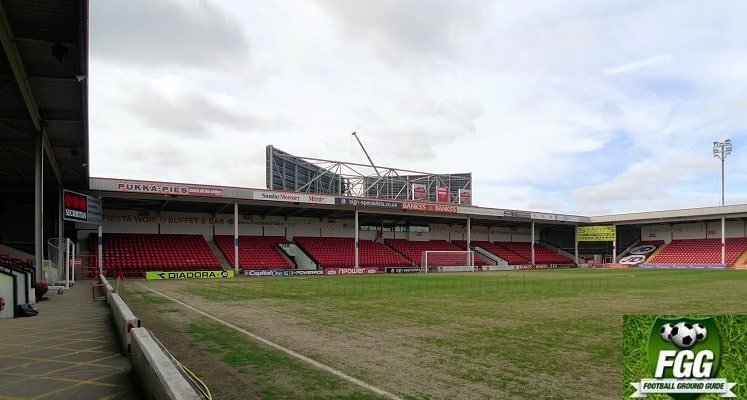 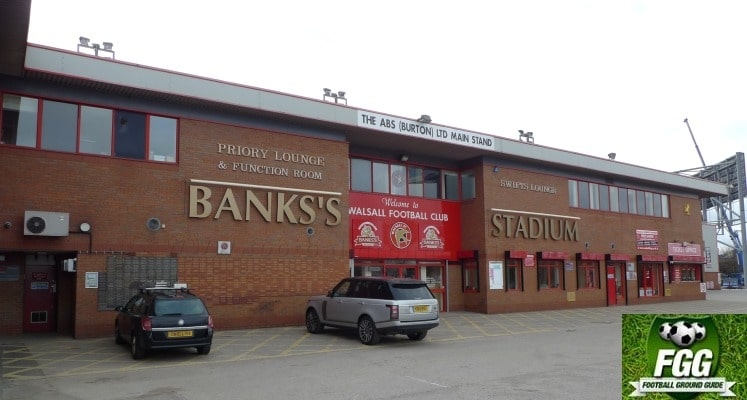 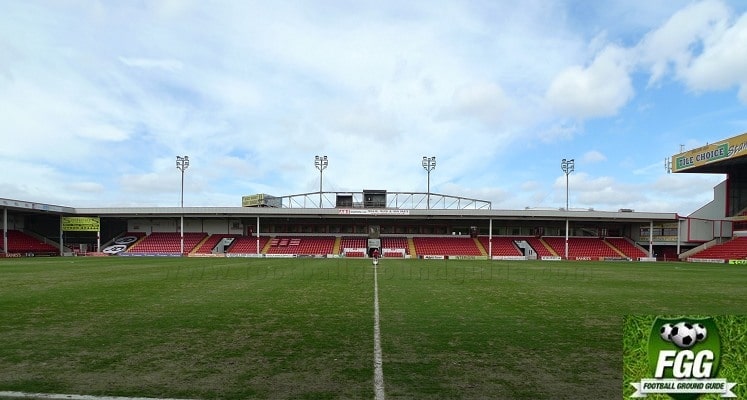 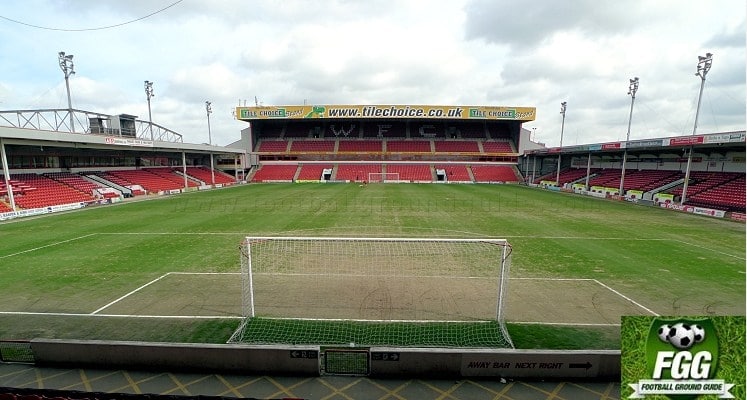 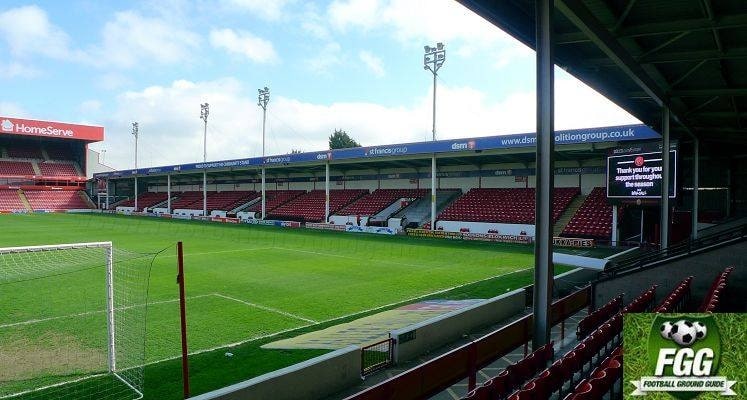 The Banks’s Stadium is a fairly simple affair and is somewhat similar looking to Glanford Park in Scunthorpe, which was opened two years earlier in 1988. However, one major difference is in 2003 the Banks’s Stadium received a boost with the opening of a huge stand at one end. This is a large two-tiered affair that completely dwarfs the rest of the ground. It is smart looking, with a glassed area running across its middle, which houses the concourse. Unusually, it has a slightly larger upper than lower tier. This end before it was re-developed was previously called the Gilbert Alsop (a former Walsall playing great) Stand, but in a commercial sponsorship deal, it is now currently called the Homeserve Stand.

The rest of the stadium is totally enclosed with three of the stands being roughly the same height, giving it a ‘box-like’ feel. These stands are not particularly big, around 15 rows high. The corners are filled, but only for advertising hoardings. The Main Stand on one side has a small television camera gantry perched on its roof, as well as the players tunnel and team dug outs at its front. At the back of the stand is a glassed area, which I presume is used for corporate hospitality. Opposite is the Community Stand which is a simple seated stand that has dedicated areas for wheelchair users at its front.

The main disappointment is a large number of supporting pillars in each of the older stands (the newer Homeserve Stand is pillar-free). As Walsall unfortunately very rarely fill the stadium, this is not a huge problem. However, for big games, this can be very annoying if you are unlucky enough to get seated behind one. There are four floodlight pylons mounted on the roof of each side stand. In one corner of the stadium between the away end and the Community Stand is a large video screen that was installed in 2014. In a corporate sponsorship deal with Marston’s Brewery, the stadium has been renamed the Banks’s Stadium.

The Saddlers moved to then called Bescot Stadium in 1990 from Fellows Park, which had been their home for 104 years.

The Club have announced that they have been granted planning permission to redevelop the KIA (William Sharp) Stand at one end of the ground. The new stand would look similar to the Tile Choice Stand and add 2,300 seats to the stadium, raising the overall capacity to 13,500. It would also mean that up to 4,000 away supporters could be accommodated at that end. The back of the stand will also feature a giant advertising hoarding, clearly visible from the M6. However there are no firm time scales as to when this might actually happen.

Away supporters are housed in the University of Wolverhampton Stand at one end of the ground, where around 2,000 away supporters can be accommodated. There are a few supporting pillars at the front which could impede your view. The good news though, is that even a small amount of away fans can really make some noise and make a good atmosphere. A trip to Walsall can be disappointing in terms of trying to get there and the stadium itself but is more than countered by the relaxed atmosphere around the ground and the friendliness of the Walsall fans themselves. Neil Harding a visiting Hull City fan provides his thoughts on the stadium; ‘In my opinion, the Banks’s Stadium has to be one of the poorer grounds in the country. It has a strange look to it with three covered stands all the same size, but one large stand that towers over the rest of the ground, giving it a somewhat lopsided feel. I found the away end to be rather cramped and the view distorted by one of the four pillars that run across the front. The only good thing is that it the stand is covered, which means a good away following can create a lot of noise. The away end is served by a food kiosk stuck in each corner, and near to the toilets which created a bit of a bottleneck at half time, especially as a large away following was present. The food though, if you are prepared to wait, was excellent, especially the chicken balti pies. The home fans didn’t appear to be threatening in any way and the stewards came across as a friendly bunch of people. The amount of Police on duty though did seem a little excessive for what was a bit of a nothing game.’ A visit to the Bank’s Stadium is normally a relaxed one, although sometimes the journey there and back can be a bit of a pain. Just outside the away end is a programme shop that stocks an interesting range of old programmes. Entrance to the away end is a little different as you have to pass under a giant elevated LED screen, which is designed to catch the attention of the M6 traffic going by.

Neutral supporter going to the game?

If you are a neutral supporter attending the game then I would recommend sitting in the Tile Choice Stand at one end of the ground. This is simply that situated between the two tiers is a large enclosed area that overlooks the pitch. This contains two bars, refreshment kiosks and a giant television screen showing the latest scores. I was very impressed with the facilities. In fact, if the refreshment kiosks had been serving prawn sandwiches then I might have thought that I had stumbled into a corporate hospitality area! Alas, the Saddlers Club situated just outside the stadium is no longer available to away supporters. Close to the ground, just a short walk along Bescot Crescent from the away end is the Park Inn Hotel, which has a bar and shows Sky Sports. Usually, there is a good mix of home and away fans inside. Otherwise, the nearest pub to the stadium is ‘King George V’ on Wallowes Lane. It is okay, but again understandably busy which can make it a bit difficult to get served quickly. It is about a 15 minute walk away, opposite the Morrisons Supermarket. If you are walking from the stadium, go out of the official car parks and down towards McDonalds. Go past McDonalds on your right and take a left hand turn into Wallowes Lane. At the end of the lane, turn left onto the main road and the pub is just setback on the left. Away fans though should avoid the Fulbrook pub near to the ground.

Just across the road from the away end is the  Park Inn Hotel. Inside it has a sizeable bar and allows in visiting supporters. Otherwise, after many years of opting not to sell alcohol to away supporters inside the stadium, the Club now serves beer to visiting fans!

The Banks’s Stadium is located right next to the M6, in fact, you can see it from the motorway just north of the RAC Control Centre. Unfortunately, this stretch of motorway normally has a large traffic jam on both Saturday lunchtimes and early weekday evenings, so allow extra time.

From M6 South
Leave the M6 at Junction 7 and take the A34 towards Walsall (beware though of speed cameras on this stretch of dual carriageway). At the end of the dual carriageway turn left at the Bell Inn public house into Walstead Road (sign posted Bescot Stadium, Bescot Station Park & Ride). Continue straight on this road for two miles, passing another pub called the Tiger on your left. You will come to Bescot Stadium and entrance to the away end on your right.

From The M6 North
Leave the M6 at Junction 9 and take the A461 towards Walsall. Bear right onto the A4148 (Wallowes Lane) and turn right at the second set of traffic lights. You will see the ground on your left.

Car Parking
There is a good sized car park located at the ground behind the away stand, which costs £4 for cars and £6 for minibusses. The entrance to this car park is off Bescot Crescent next to the Park Inn Hotel and is signposted as ‘Blue Zone’. The car park which is for the use of visiting supporters only (there are two other car parks available at the ground for home fans), normally lends itself to a quick getaway after the match. More or less opposite the away end is Bescot Railway Station, which also offers pay and display car parking for £2. Alternatively, there is some street parking to be had off Wallowes Lane. There is also the option of renting a private driveway near the Banks’s Stadium via YourParkingSpace.co.uk.

The Banks’s Stadium has its own Railway Station, called Bescot Stadium which is situated behind the away end and is only a few minutes walk from the turnstiles. Trains run there on a local line from Birmingham New Street and the journey time is around 20 minutes. There is a regular service on Saturdays along this line and you should not have too many problems getting away after the game.

Walsall were formed back in 1888 through two local clubs merging; that meant there was already a vacant ground – the Chuckery – which is where Walsall played their early games. Five years later they moved away from the Chuckery to play on their games at a pitch on West Bromich Road but that didn’t last long. By 1895 the club were on the move again and Fellows Park became home; that would remain as Walsall’s stadium until 1990 albeit numerous protests throughout the eighties prevented the club moving earlier with multiple ground shares scrapped. The solution to escape the dated Fellows Park was to move to the current Walsall stadium, Bescot Stadium.

Like a number of Clubs Walsall have a category system (A & B) of ticket pricing, whereby the most popular games cost more to watch. Category A games are shown below with Category B prices in brackets.

Concessions apply to Over 60’s/Juniors who are Under 18.

* Please note that these prices are tickets purchased prior to matchday. Tickets bought on the day of the match can cost up to £2 more.

** These Family Tickets are only available on matchdays from the Walsall FC Ticket Office.

Official Programme £3.
There is also an excellent programme shop behind the William Sharp Stand

Walsall have local rivalries with numerous clubs including the likes of Wolves, West Brom, Birmingham and Aston Villa. Of course, those four teams are much bigger than Walsall and, for a long time, have competed at a different level. As such their main rivals are:

Shrewsbury and Walsall are both located in the western part of England where lower league sides are few and far between; the main clubs out that way compete higher up the pyramid. As such, the 30-odd miles between these clubs see their games take on an extra spice when they come around on the calendar.

Record Attendance at the Banks’s Stadium:

Map showing the location of the Banks's stadium, railway station and listed pubs 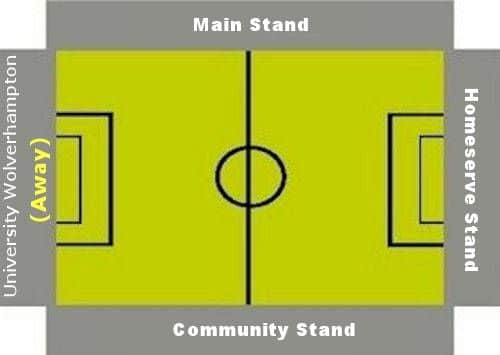