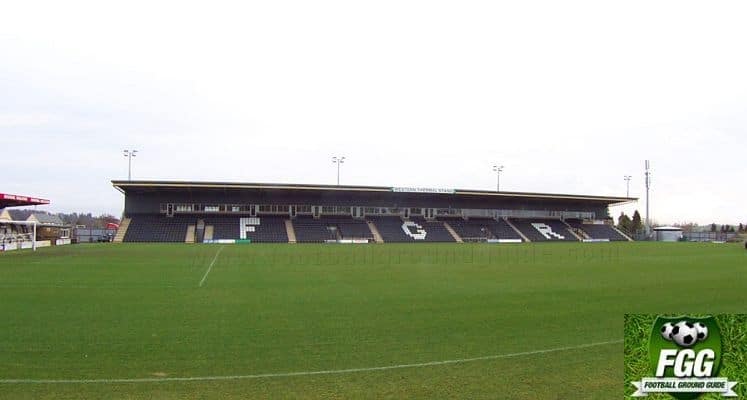 The New Lawn ground is situated on the western edge of the picturesque Cotswold town of Nailsworth. The name Forest Green is taken from the area of the town where the clubs home is found. Opened in 2006, the New Lawn ground is sited on top of a fairly steep hill and is quite exposed to the elements. It is only a short distance from the site of their old Lawn ground, which has now been redeveloped for housing.

The stadium is dominated by the smart-looking Main (East) Stand at one side of the pitch. This stand is all seated and has a capacity of 1,881. It has a cantilever roof as well as a row of executive boxes running across the back of it. The team ‘dugout’ areas are located at the front of this stand. Opposite is the small open West Terrace, which is only seven steps high. On one side of this terrace, towards the South Stand a small covered seated stand that has been erected for use by away fans. This odd looking prefabricated stand has just two rows of seats and is elevated above pitch level. Running along the back of this terrace are four floodlight pylons.

Interestingly both ends have to different degrees been relocated from the old Lawn ground to the new stadium. At the Nympsfield Road (North) end of the ground, is a covered terrace, the roof of which came from the Barnfield Road side of the old ground. Opposite is the South Stand. This terrace was originally the Trevor Horsley Stand at the old ground and was re-erected at the New Lawn. Overall the New Lawn is a small but tidy stadium that is well maintained.

The Club club have been given planning permission to build a new 5,000 capacity stadium near to Junction 13 of the M5. The new stadium is being billed as the ‘greenest football ground in the World’ being eco-friendly and constructed of wood. The Club selected World-renowned architects Zaha Hadid to design the new stadium. Zaha Hadid are currently involved in designing new stadiums for the 2022 World Cup in Qatar and previous works have included the Aquatic Centre built in London for the 2012 Olympic Games. The image below of an artists impression of how the new stadium might look is supplied courtesy of the Forest Green Rovers website where more images of the proposed stadium can be viewed. No timescales have been published as to when construction of the new stadium will commence. Away fans are housed on the West side of the ground, mostly on the open terrace that has a capacity of around 1,000 fans. During the Summer of 2018, a small temporary covered area was installed towards the South Stand, which has a capacity of 200 seats. Although not ideal it at least does provide some shelter on what is otherwise an uncovered terrace. It may also help away fans generate some more noise from that side too. The entrance to the away terrace is at the back of the stadium from the main entrance and the access paths are quite narrow. Entrance to the ground is via electronic turnstiles, meaning that you need to scan your ticket to gain admittance.

My visits to The New Lawn (and the old ground for that matter) have been most enjoyable and it would be difficult to find a more friendly and welcoming club than this one. If the chance arises, a visit to this Gloucestershire ground is a pleasant days outing in a unique setting.

There is bar at the ground itself called the Green Man, which is built into the back of the Main Stand. This bar serves real ale from the Stroud Brewery, hot food is available and it has a number of televisions showing televised sports. However, normally only home fans are admitted. The Club though have set up a small marquee bar for visiting fans which is located near to the away turnstiles.

Maxwell Meadows a visiting Solihull Moors fan adds; ‘We went to a pub called the George, which is on New Market Road around a 15 minute walk from the ground. It is an extremely atmospheric pub serving a good pint of beer. It is worth seeking out despite the walk back up the hill. To find this pub from the ground then walk back down the main road towards the town centre. Half way down look out for Burma Road on the right and follow it along into Seven Acres Road. Carry on till you see a footpath on your left heading sharply down the hill. It is a shortcut that leads to the back of The George which is in Newmarket Road. It was a bit of a stiff walk back up to the ground but not as far as from the town centre and at least Burma Road is on the level.’

There are some other pubs and food outlets are at the bottom of the hill in Nailsworth, which is about a 15 minute walk, such as the Britannia on New Market Road. But unless you are rather fit then the walk back up to the ground is not for the faint-hearted as it is up a steep hill (takes at least 30 minutes). Alternatively, a five minute drive (or two and a half miles) away from the ground in Nympsfield Village is the Rose Crown which serves real ale and food too. If you have a bit of time on your hands then there is the Village Inn on the A46 on the North side of the town. This pub is well known for its ale being the home of the Keep Brewing Brewery and also shows Sky and Bt Sports.

Colin Scholes a visiting Oldham Athletic fan informs me; ‘We found an outstanding pub in Whiteshill called The Star Inn. It is located around six miles from the ground. The landlord was extremely welcoming and the pub offered several lagers and ciders and a couple of real ales as well. It was well worth the visit.’

When planning a trip here, don’t try and find Forest Green on your map, look up Nailsworth, south of Stroud in Gloucestershire.The best way to approach is from the M5 and exit at junction 13 and head for Stroud on the A419. At Stroud turn onto the A46 towards Nailsworth. This will bring you into the centre of the town when you reach the Information Centre take the first right at the mini roundabout into Spring Hill, which goes up a steep hill sign posted Forest Green. The Lawn is at the top of this hill. Turn left at the roundabout at the ‘summit’ into the stadium entrance. There is no parking available in the club car park for visiting fans unless you are a blue badge holder who has pre-booked a space. A short distance away down Nympsfield Road is Nailsworth Primary School which offers parking at £5 per car. Otherwise, there is plenty of on-street parking in the area, although please be considerate to local residents.

The Club operates a Park & Ride scheme from the premises of Renishaw plc, which are located on the main A46 Stroud Road (GL5 5EY). There are 200 spaces for cars and cost of £3 per vehicle. Buses up to the ground commence up to three hours before kick off and return after the match has ended.

There is no railway station in Nailsworth itself. The nearest is in Stroud which is five miles away. I would, therefore, consider getting a taxi from the station to the ground and booking one back for your return. Stroud Railway Station is served by trains from London Paddington, Swindon and Cheltenham Spa.

Otherwise, as Mike Chappell informs me; ‘You can also take a bus from Stroud to very near the ground in Nailsworth. Stagecoach Bus Number 63 operates a half hourly service on Saturday afternoons, with the journey taking just under half an hour. You can catch the bus in Stroud from behind the Merrywalks Shopping Centre across the road from the Vue Cinema where there are three bus stops in a row. On passing through Nailsworth the bus loops around near the ground (which you can’t really miss) and stops outside the nearby Nailsworth Primary School on Nympsfield Road. This is where you also get back on the bus after the game has ended. It takes around ten minutes to walk from Stroud Railway Station to the Number 63 bus stop.’ As you come out of Stroud Railway Station proceed up the station approach road and at the top turn left. Then take the next right and just past Poundland there is the entrance to the Merrywalks Shopping Centre. Just walk to the back of the Centre following the signs for the Vue Cinema/Bus Station. The bus costs £3 single or £5.10, for an Adult Return ticket. A Number 63 timetable can be found on the Stagecoach website (PDF document). Unfortunately, the Number 63 does not operate late on weekday evenings, so if attending a mid-week game you will have to rely on other transport such as a taxi to get back to Stroud. A taxi costs around £15 each way.

Christopher Mott informs me; ‘We had hoped to get a taxi from the ground at the end of the game, but the local taxi firms refused to come to the stadium because “there was a football game going on”. The drivers seemed to fear that they would get stuck in the traffic as local cars left the ground and they wouldn’t be able to pick up easily. This caused my wife and to panic and we had to leave the game early in order to catch a 63 bus that would get us back to Stroud in time for the train.’

Forest Green’s current stadium is well known for the fact the club have followed innovative solutions to make their stadium green and have become the first carbon neutral club in the world. They haven’t been at the New Lawn stadium forever though. They started life in a stadium called The Lawn Ground before a three year hiatus at Nailsworth. That short spell ended in 1927 and they returned to the original Lawn Ground. They remained there through to 2006 before the move to the creatively named New Lawn.

* These prices are for tickets purchased in advance of matchday. Tickets bought on the day of the match can cost up to £2 more per Adult ticket and £1 per young person/child ticket. Under 11’s are still admitted free in the terraced areas and Main Stand wings.

Forest Green vs Cheltenham Town rivalry: A study conducted a few years ago ranked this derby game as one of the biggest in the country. Bonkers, right? We’re not having that as factually accurate but clearly the fans of the two Gloucestershire based clubs have a beef with one another.

Forest Green vs Gloucester rivalry: Prior to Forest Green climbing the pyramid their meetings with Gloucester were quite regular and the two nearby clubs developed a rivalry. Now they don’t play very often the dislike has settled into friendly banter. We’re sure if the two play again in a consistent basis the spice would soon come back.

Special thanks to Ben Laurens, Mike Cleave and Richard Smith for providing photos of the South side of the New Lawn Stadium and new Away Seated Stand. 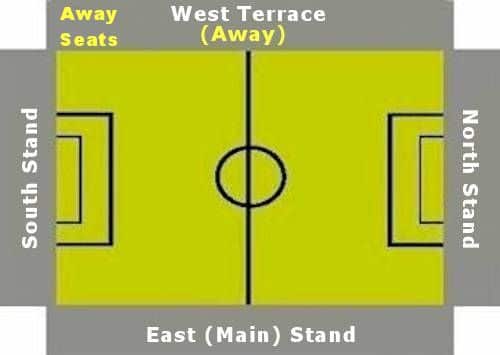