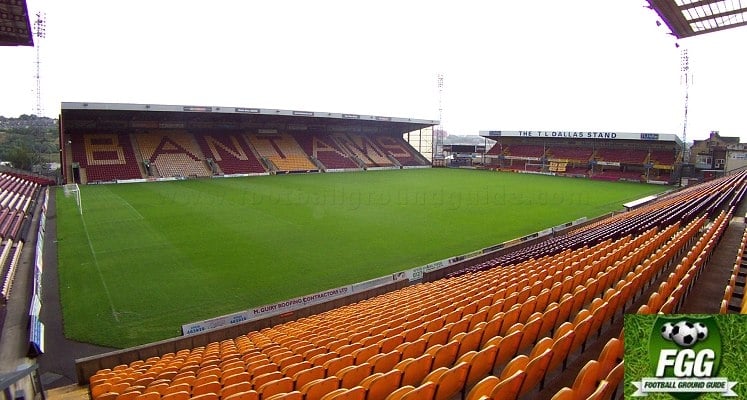 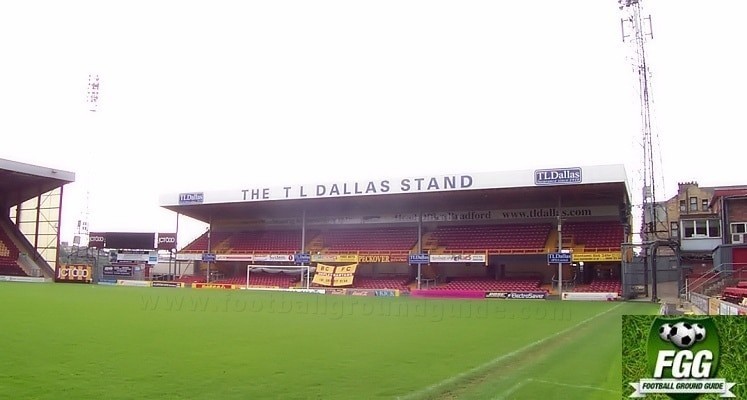 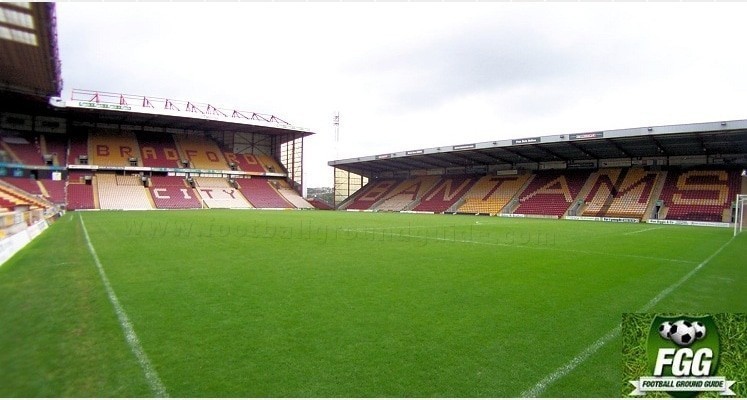 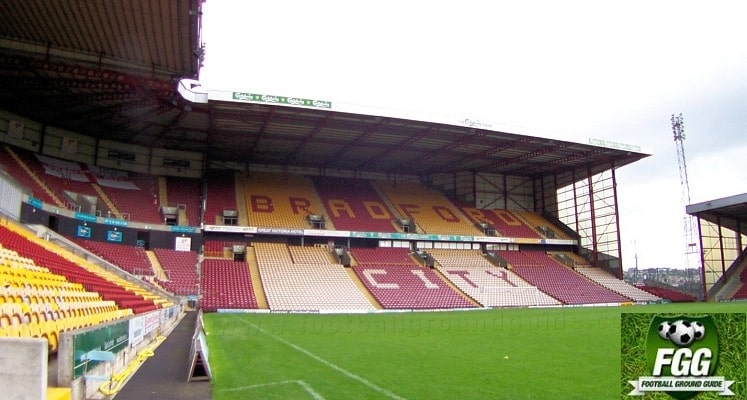 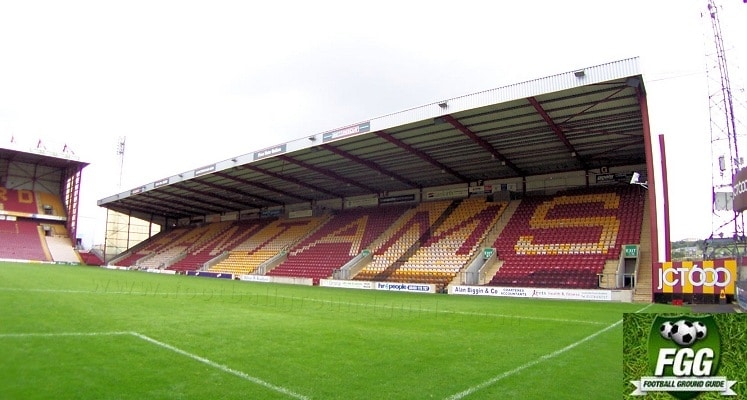 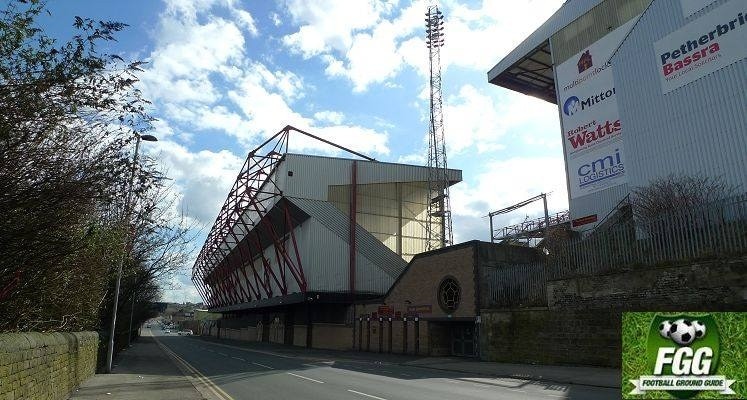 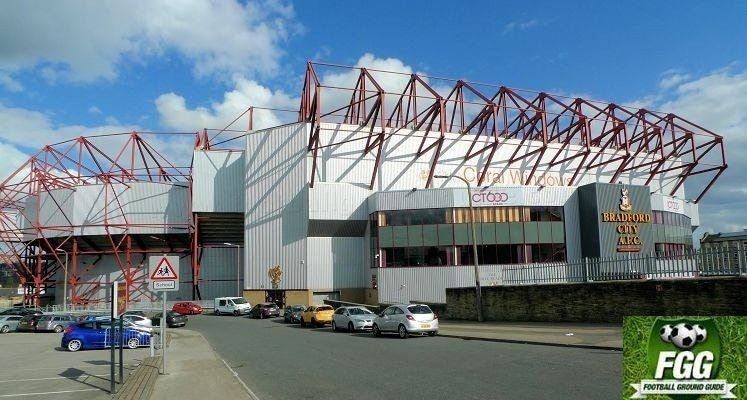 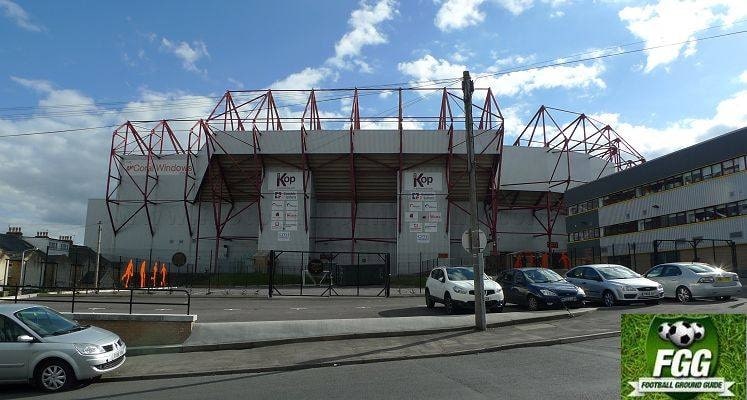 The term 'a game of two halves' is often applied to a football game; in the case of the Utilita Energy Stadium (but still known to many fans as Valley Parade), a ground of 'two halves' comes to mind, as the initial impression is that one side is twice as big as the other. The Kop End is a modern two-tiered stand, that is simply huge and looks quite superb. Opened in 1999 it has a capacity of 7,492 fans. A year later the Kop End was extended around one corner to meet the Main Stand that is of a similar height and design. The JCT600 (Main) Stand was opened in 1986 and had a second tier added in 2001. Between these two stands and including the corner between them then they house just under 19,000 supporters, making for an impressive spectacle.

The rest of the ground now looks somehow rather out of place. The Midland Road Stand on one side (now called the Mamma Mia Stand in a sponsorship deal with a local Italian Restaurant) is a covered single tiered stand, which has windshields to each side, it was opened in 1996. At some other grounds, this would look impressive, as it is of a fair size, with a capacity of 4,500 and is free of supporting pillars. However, it almost lost in the shadow of its larger newer neighbours. At the remaining end is the TL Dallas stand which is an odd looking small 'double-decker' type stand. This two-tiered covered stand has the upper tier largely overhanging the lower tier, giving this 'double-decker' effect. There is also a large electric scoreboard in one corner of the ground, between the Mamma Mia and TL Dallas Stands.

In 2019 Valley Parade was renamed the Utilita Energy Stadium in a three-year corporate sponsorship deal.

Away fans are housed in Blocks F & G of the Mamma Mia Stand on one side of the ground. Blocks F & G are located on one side of this stand towards the TL Dallas End. The normal allocation is 1,300 seats in this area. This stand offers good views of the playing action, being free of supporting pillars. It also has a glass windshield to one side. For most matches, the TL Dallas End Stand remains closed, which dampens the atmosphere a little, with only three sides of the ground in use.

If a large away support is expected then the TL Dallas Stand is opened for away fans, where 1,840 supporters can be accommodated. If this stand is open then if possible try to get tickets for the upper tier, as the view of the action is far better. On the downside, there are a number of supporting pillars that could impede your view. Roger Mulrooney a visiting Barnsley fan adds; 'On my last visit I found the home crowd friendly and non-threatening. The stewards were particularly good-natured and helpful. Still a very good away day for a visiting fan'.

Having been a student in Bradford and having watched them win the old Third Division, I have a bit of a soft spot for this club. And having been there on the day of that fateful fire in 1985, Valley Parade will always stay deep in my memory. Pleasingly I have found Bradford to have become rather more friendly towards away supporters in recent years. It is quite an enjoyable day out especially if you enjoy what the city has to offer. Make sure that you wrap up well unless the weather forecast is 80 degrees. This is because Bradford is situated at a bottom of a valley, down which a rather cold wind normally prevails.

Chris O'Sullivan a visiting Bury fan recommends the Bradford Arms on Manningham Lane; 'It is only about two minutes from the ground and was welcoming to away fans'. About a ten minute walk away from the stadium along Manningham Road (going away from the City Centre) is the Cartwright Hotel, which has a sizeable bar. Also about a ten minute walk away (this time towards the City Centre) is the 'Corn Dolly' on Bolton Road, which is listed in the CAMRA Good Beer Guide, as is the New Beehive on Westgate. The New Beehive is somewhat of a 'step back in time' still having gas lighting.

Near to Bradford Forster Square Station on North Parade is another pub to feature in the CAMRA Good Beer Guide, the Sparrow Bier Bar. This bar offers up to four real ales, plus ciders and continental lagers. Neil Le Milliere a visiting Exeter City fan adds; 'The Sparrow was superb. Although on the small side (it is probably only good for 50 or so supporters), it is still an excellent place to visit with a superb choice of ales. Plus the pork pies were to die for!' David Crossfield a visiting Barnsley fan adds; 'After arriving at Forster Square Station we went to the Record Café on North Parade, which was on the way to the ground. It had a good choice of real ales on offer and had a mix of home and away fans inside. Also on North Parade is the Peacock Bar, which apart from offering a number of real ales and ciders, has Sky Sports and serves Indian street food.

Steve Ellis a visiting Exeter City fan recommends the Rose and Crown in the interesting Sunbridgewells complex in the city centre. This complex which houses a number of bars and eating places is located in tunnels underneath the city streets and is around a 20 minute walk from Valley Parade. The Rose & Crown serves real ales from the Leeds based Nomadic Brewery. Nearby Sunbridgewells, the entrance to which is on Upper Millergate is a Wetherspoons outlet called the Turls Green.

Alcohol is available to away fans in the Mamma Mia Stand Stand. However, if away fans are also housed in the TL Dallas Stand at one end, then beer is not sold in that end.

Leave the M62 at Junction 26 and take the M606 for Bradford. At the end of the motorway, keep to the right hand lane and take the Ring Road East (signposted A6177 City Centre). From this point the stadium is well signposted through the use of a football image. At the next roundabout turn left continuing along the Ring Road East, passing a McDonalds on your left and then an Asda superstore. At the next roundabout turn left onto the A650 (signposted City Centre/Keighley). After crossing a further two roundabouts the road becomes three lanes. Keep in one of the two right hand lanes (signposted Keighley/Skipton). Continue straight along this road towards Skipton and eventually you will be able to see the stadium in front of you, over on the left. At the Kia Car Dealership on your left, turn immediately left into Station Road. At the top of Station Road turn left along Queens Road, then the second left into Midland Road for the away entrance. For the main offices continue along Queens Road and at the traffic lights turn left into Manningham Road. The ground is quarter a mile away on the left. Mostly street parking around the ground. There is also the option of renting a private driveway near in the local area via YourParkingSpace.co.uk.

If going by train into Bradford Interchange, it is quite a walk to the ground (20 minutes).  Either take a taxi (£6) or alternatively the bus station is located next to the train station (Bus No's 622, 623, 626 or 662). Chris Hawkridge suggests; 'supporters travelling via Leeds should catch the Leeds – Bradford Forster Square service (two trains per hour during the day) rather than those to Bradford Interchange. Forster Square is only 10 minutes walk from the ground'.

From Bradford Forster Square (Trains from Leeds, Skipton & Ilkley)
Leave the station to the right of the ticket office, either up the six or so flights of stairs or up the long ramp further on. This brings you out on Manor Row, where you should turn right. Keep on this road passed the City Gent pub to a massive crossroads. Here, you can either go straight over and walk all the way down Manningham Lane, passed The Bradford Arms Pub to Valley Parade, just before the Petrol Station. Alternatively, fans in sitting in Dallas or Midland Road Stands (away end) will find it easier to turn right at the main cross roads, then turn left on to Midland Road after 100 yards and follow the road all the way to the turnstiles.

From Bradford Interchange (Trains from Everywhere else)
Leave the station walking towards the city centre, with the Queen pub on your left and St. Georges  Hall on the right. Walk down the hill, and take a right just after the Ginger Goose pub, on to Market Street. Follow this road round to the mini round about and go up the hill. You will come on to Manor Row, where Bradford Forster Square Station is…and can follow the instructions above.

Thanks to Chris Eveleigh for providing the walking directions above.

All areas of the stadium

* When purchased by 5pm the day before matchday. Adult tickets bought on the day of the game cost £5 more.

** Under 11's can be admitted free, providing that they are accompanied by a paying adult. Please also note that children under two years old are not allowed inside the stadium.

Bradford Hotels - Find and Book Yours And Help Support This Website

If you require hotel accommodation in Bradford then first try a hotel booking service provided by Booking.com. They offer all types of accommodation to suit all tastes and pockets from; Budget Hotels, Traditional Bed & Breakfast establishments to Five Star Hotels and Serviced Apartments. Plus their booking system is straightforward and easy to use. Just input the dates below that you wish to stay and then select from the map the hotel of interest to get more information. The map is centered to the football ground. However, you can drag the map around or click on +/- to reveal more hotels in the City Centre or further afield.