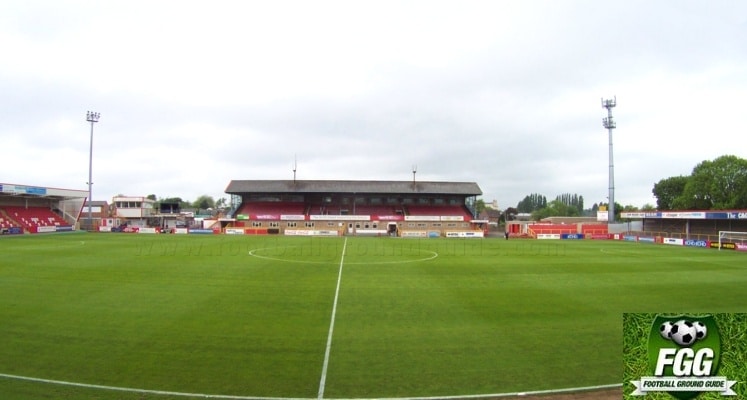 At one end of the ground is the newest addition to the stadium. The Hazlewoods Stand which was opened in December 2005 and has a capacity of 1,100 fans. It is particularly steep in its design, has a perspex windshield to one side and perspex panels incorporated into its roof, to allow more light to reach the pitch. The stand is unusual in the respect that it has a couple of more rows of seats on one side of it. There is also a small electric scoreboard on its roof. On one side of the ground is another relatively new stand. the Colin Farmer Stand (named after a former Vice Chairman of the Club) was opened in November 2001. This stand sits proudly at one side of the pitch and houses 2,034 supporters. It is a covered, all seated, single tiered stand, part of which is given to away supporters. The ground is now enclosed in one corner where the two new stands meet, although it is not used for spectators. On the other side of the pitch is the Autovillage Main Stand, which was opened in 1963. It has seating to the rear and terracing at the front. Straddling the halfway line, it does not extend the full length of the pitch, having open spaces to either side. At one end is the small covered terrace, called the Prestbury Road Stand, which is the home end of the ground. Currently, this is named the Speedy Skips Stand in a sponsorship deal, which for some reason always makes me chuckle…

In 2018 the Whaddon Road ground was renamed the Jonny-Rocks Stadium, in a three-year corporate sponsorship deal with a Gloucestershire chauffeur & executive car service.

Away supporters are housed in the Hazlewoods Stand at one end of the ground, where just over 1,100 supporters can be accommodated. The view of the playing area from the Hazlewoods Stand and the facilities inside are good, plus it has good leg room. If demand requires it, then part of the Thomson & Bancks Stand can also be allocated to away fans. The food on offer within the ground is not bad; you can choose from Burgers (£2.80, including for those with a bigger appetite a half pounder with cheese £4), Hot Dogs (£3), Home made ‘Gourmet’ Pies (£3.20),  Bacon Rolls (£3), Cornish Pasties (£3) and Sausage Rolls (£2.50).

I found Cheltenham itself to be quite pleasant and the supporters friendly. The picturesque Cotswold Hills around Cheltenham can easily be seen from inside the ground. The atmosphere is also pretty good and there is a drummer in the home end. I did find the p.a. to be a bit deafening though.

Paul Stillwell a visiting Luton Town fan adds; ‘There is a Fish & Chip shop called the Royal Fish Bar which is just a two minute walk from the ground on Whaddon Road itself (at the junction with Thames Road). The Robins Bar at the ground welcomes away fans and serves hot food but was already busy when we arrived at 1pm. Overall Whaddon Road is a nice ground, with a friendly welcome and if your team are not playing well you can always admire the view of the Cotswolds behind the stand.’ Peter Llewellyn informs me; ‘Don’t go on race day like I did – it’s worse than getting away from Old Trafford!’

In the spring of 2018, Cheltenham Town announced that their stadium, fondly known as Whaddon Road, would be renamed as the Jonny-Rocks Stadium. The Cheltenham ground has actually seen a lot of name changes, especially recently. The ground was originally known as the Victory Sports Ground until it was renamed the Abbey Business Stadium in 2009 for sponsorship reasons. In 2015, Cheltenham signed a three-year sponsorship deal and the stadium had to be renamed to the World of Smile Stadium. This name itself didn’t last long though; the three-year deal ended in just one year with Whaddon Road stadium being renamed the LCI Rail Stadium. It is unclear how long the name “Jonny-Rocks Stadium” will last. Only time will tell.

There is a club bar at the ground called the Robins Nest which allows in small numbers of away fans for a £1 admittance fee. Neil Le Milliere a visiting Exeter City fans recommends the Kemble Brewery Inn on Fairview Street. This pub which is listed in the CAMRA Good Beer Guide serves up to six real ales.

Around a ten minute walk away are the ‘Sudeley Arms’ and ‘The Conservatory’ on Prestbury Road on the outskirts of the town centre. There is even a decent fish & chip shop situated in-between the two. To find these pubs, turn right out of the club car park, and then turn left at the end of the road. Go straight over the roundabout, and The Sudeley Arms is on your left and the Conservatory is further up on your right. It is no more than a ten minute walk from the ground.

Otherwise very near to the ground is the Parklands Social Club, where you can also park your car (£5). Simply go down Whaddon Road, passing the ground and the bowling club on your left. Take the first left hand turn and the entrance to the social club car park is a short distance down on the left. Robert Middleston a visiting Nottingham Forest fan adds; ‘The Club had a friendly welcome, and the locals we met were all happy to chat football. The club has a number of TV screens including a very big screen, on which the Sky Premier plus game was broadcast, a nice way to pass time over a sandwich and pint before the match’.

Chris Clarke informs me; ‘A good alternative is The Hewlett Arms which is a bit more cosmopolitan than other pubs in the local area, it can be found at the top of Hewlett Road which is about a 10 minute walk from the ground’. Also further along Hewlett Road is the Fairview Pub.

Leave the M5 at junction 10 and take the A4019 towards Cheltenham. Keep straight on through the traffic lights, until you come to large roundabout (there is a McDonalds on the left), at which you turn turn left. Continue up this road going over a double mini roundabout. Keep going for about 300 yards and then turn right into Swindon Lane. Go over the level crossing and straight over the next roundabout (signposted Prestbury) passing the race course on your left. Turn right into Albert Road (signposted Gloucestershire University) and at the bottom at the roundabout turn left into Prestbury Road, (the ground is signposted from here) and then further down Prestbury Road, turn right into Whaddon Road. The ground is down on the left.

There are a limited number of spaces available in the Club car park at the ground which cost £5. However, these can be pre-booked by calling the Club on 01242 573 558. The Parklands Social Club does allow some parking at £4 per car (See Where To Drink). If arriving a couple of hours before kick off then there is street parking available on streets running off Whaddon Road itself.

Cheltenham Railway Station is over two miles from the Whaddon Road ground, so best to jump in a taxi. Phil Truscott advises; ‘I caught Bus Service D from the Station Car park to the Town Centre (Clarence Street). On Saturdays Service D runs every 10 minutes. It costs £3.90 for a ‘day-rider’ ticket with unlimited travel in Cheltenham. From the Town centre it is a short walk to Whaddon Road down Prestbury Road. For the return journey you can catch Bus D (going in the direction of Hatherly/Warden Hill) from Pittville Street in the town centre (at the side entrance of Marks and Spencer). It stops opposite the railway station outside a Tesco Metro’. Bernard McCall a visiting Accrington Stanley fan adds; ‘If you catch Bus D from the train station and do nor get off in the town centre, then it continues to the racecourse where you can get on the free Park & Ride shuttle bus to the ground’.

If you are going to embark on the 35-40 minute walk then thank Dave Lucas for the following directions; ‘Turn right out of station car park and follow Queens Road for around half a mile. At end of Queens Road and turn left into Lansdown Road. At the next (Montpellier) roundabout, turn left into Montpellier Walk (which later becomes the Promenade). At the end of the Promenade, turn right into the High Street. Go along High Street for around 100 yards and then turn left into Winchcombe Street (by a branch of the Cheltenham & Gloucester Building Society). Continue straight along Winchcombe Street and into Prestbury Road. Straight across the next roundabout and then first right into Whaddon Road. The entrance to the away end is down on the left’.

Before Cheltenham Town had a nailed on home, they held trials at the East Gloucestershire Cricket Ground; that dates back to around 1887. The club then went on to play their earliest home games at this ground. Subsequently, Cheltenham Town bounced around a couple of places like the Agg Gardner’s Recreation Ground, Whaddon Lane and Carter’s Field with all three grounds located within half a mile of their current stadium. In 1927, The Robins relocated to Whaddon Road, where they have played up until today. There have been very few changes of note over that time.

For regular fixtures prices are as below. For some more popular games these prices are increased by £2.

Cheltenham vs Forest Green rivalry: With both teams being from Gloucestershire, meetings between these two are nicknamed “El Glosico”; that’s tongue in cheek, of course. The clashes between Cheltenham and Forest Green have become more heated in recent years with Forest Green arriving in the football league.

Cheltenham vs Gloucester City rivalry: This rivalry isn’t exactly a humdinger with the sides playing at different levels but it’s a derby that does still attract a bit of fan fare locally in terms of cheap jibes; the sides haven’t met competitively for nearly a quarter of a century though.

Cheltenham vs Bristol Rovers rivalry: Encounters between these sides are called the West Country derby. This is because both teams are among the nine teams based in the West Country of England. Rovers in particular, however, have much bigger rivalries to worry about.