Burnley’s ground, Turf Moor, has been their home since 1883; it’s is one of the longest continual occupations of a ground by any club in the League. Half the ground was re-developed in the mid-1990’s with two smart looking new stands being opened. The first of these the James Hargreaves Stand was opened in early 1996. It has two large tiers, with a row of executive boxes, housed between them. This stand replaced the famous Longside Terrace, which was a big steep covered terrace. Later in 1996, the Jimmy McIlroy Stand was opened at one end of the ground. This two-tiered stand is similar in design to the James Hargreaves Stand, which gives half of Burnley’s ground a uniform look. In 2019 two new three-storey structures were built to fill in the corners on each side of the Jimmy McIlroy Stand. These feature viewing areas for disabled fans and on one of these new structures in-between the James Hargreaves and Jimmy McIlroy Stands, there is a large video screen.

The other two sides of Burnley’s stadium are much older and look out of place next to their shiny new neighbours. The Bob Lord Stand at one side of the pitch was opened in 1974. It is a small all seated single tiered stand, with a row of supporting pillars running across its middle and has windshields to either side. The Ladbrokes Stand (formerly known as the Cricket Field Stand) at one end of the ground was opened in 1969. Again it is a simple looking single tiered stand that has some supporting pillars. The teams enter the playing area from a tunnel located in-between the Ladbrokes and James Hargreaves Stands. As the team dugouts are located on the other side of the stadium, in front of the Bob Lord Stand, then this leads to quite a procession of players and staff, at half and full time.

Are there any plans to develop Burnley’s stadium right now? Yes. What are they? Well, that’s a little harder to answer. The executive committee at Burnley have been open that they intend to improve Turf Moor but specifics have been kept largely under wraps. All we know is that the Cricket Field end is first on the hit list. That said, changes to this end of the Burnley’s ground for a while with the first murmurs of change coming back in 2008; a variety of factors has prevented the large scale changes to this point with minor alterations – like switching to plastic seats – used to prevent the stand deteriorating. Away fans visiting Burnley’s ground are housed in the covered Ladbrokes Stand at one end of the ground. Visiting supporters are housed on one side (towards the Bob Lord Stand), where 2.414 seats are allocated. This stand is shared with home supporters which coupled with the stand having good acoustics, normally makes for a good atmosphere. The Club have at long last spent some money on improving the facilities in this stand. This includes new turnstiles as well as a refurbishment of the undercroft and toilets in this stand. What was a dark dank concourse is now quite pleasant complete with large television screens. However, the seats are still the old wooden type (although they have been painted recently) and if you end up being seated behind a supporting pillar, then the view is not great. On a brighter note, then in one open corner at the far end, you can see beyond Burnley’s stadium, the Pennine hills rolling into in the distance.

Neil Iwanicki a visiting Aston Villa fan adds; ‘The away stand has two pillars which can affect your view and has old, wooden seats instead of plastic ones. The concourses below the stand are not for the faint-hearted if your team has a large away following, as it is like a rugby scrum to get a drink. There are some Burnley fans in the James Hargreaves Stand who do their best to get the atmosphere going, but they never really succeeded on my visit. If you travel by official club coaches, then you’ll get a police escort from the M65 to the ground.’ Food on offer inside the ground includes Hot Dogs, plus a range of Holland’s Pies; Big Potato and Meat, Cheese & Onion and Peppered Steak.

Burnley are generally a well supported club and there is normally a good atmosphere, however, this can sometimes become quite intimidating for the away supporter making your way around the ground, so exercise discretion. Pete Mitton recommends the Cricket Club; ‘the clubhouse at the Cricket Club (you can also park there) is open on matchdays and visitors are always made welcome (wearing colours), which is ideal as it is right next door to Turf Moor.’ Paul Hanson adds ‘Another place I could recommend is the Queen Victoria Public House. The away fans are always directed/encouraged to park in one location, by the side of the Burnley fire station; Pass there, away from Burnley’s ground and proceed for about 100 yards where you will find the entrance to the Queen Victoria (Brewers Fayre establishment). Turf Moor is no more than 10 minutes walk away. Away fans visit regularly wearing their colours’. You can also park at the Queen Victoria. It is free for three hours (you have to enter your car registration inside the pub into a terminal) for any longer you need to pay £5, but this has to be paid online.

Matthew Harrison informs me; ‘The Bridge Bier Huis pub’, which is around ten minutes walk away from the ground, serves good beer and food and is fine for away supporters’. This pub which is in the centre of Burnley is listed in the CAMRA Good Beer Guide and in addition to a number of real ales, offers a large selection of bottled beers from around the world.

Ulrich Bliemel a visiting Liverpool fan recommends the New Brew’m Pub on St James’s Row in the Town Centre around 10 minutes walk from Turf Moor. It is a small micropub that serves a number of real ales.

Ian Pilkington advises ‘The Turf Hotel on Yorkshire Street and pubs in the town centre are best avoided. Colours are best covered up in and around the centre of town’. Alcohol is normally available inside Burnley’s ground for away fans to purchase in the form of Lager, Bitter and Cider.

If driving to Burnley’s stadium, leave the M6 at Junction 29 and onto the M65. Leave the M65 at Junction 10 and follow signs for Towneley Hall. This road eventually goes past the ground. There is a car park at the cricket ground located right by Turf Moor. There is also a private car park available on Doris Street, off Belverdere Road (BB11 3DL), which is around 400 yards from the stadium. There is also the option of renting a private driveway near Turf Moor via YourParkingSpace.co.uk. Other than that, you’ll be looking at street parking.

Upon leaving the station cross the main road towards the cinema. The ground should be clearly visible in the distance straight ahead. Turn left and progress down “Centenary Way” an unmissable dual carriageway (A682) going downhill towards the ground. A few minutes walk down this road will bring you to a roundabout where you should turn right under the canal bridge into Yorkshire Street (A671). Continue down this road and you will reach Turf Moor on your left, with the away stand the first to be reached. Thanks to Rob Quinn for providing the directions and station information.

Walk out of the station and across the road down towards a small retail area including Fads and Halfords Cycles. You will reach the inner ring road (A679), where you turn left and after about 200 yards you will reach a set of traffic lights. Turn right at the lights into Church Street (A682). Continue down Church Street until you reach a large roundabout at which you turn left under the canal bridge into Yorkshire Street (A671). Continue down this road and you will reach Turf Moor on your left, with the away stand the first to be reached. Thanks to Paul Hanson for providing the directions.

Where to stay near Burnley's ground

If you want to stay in Burnley for more than just the football then a hotel might be needed. There is one steady option for you here, which is the Premier Inn located off the A6114. At around £60 per night and just 0.7 miles from the Turf Moor it’s a pretty reasonable spot.

Beyond that, you’ll be looking at a couple of hotels the other side of the M65. Holiday Inn offer an Express hotel here for a similar price to the Premier Inn whilst there is also a hotel and spa complex under the name Crow Wood; the latter will set you back £160 per night. Both are circa 1.5 miles from the stadium.

One key question when attending any football match – either at Burnley’s stadium or elsewhere – is ticket price.

When attending a game at Turf Moor most fans opt to grab a programme. It’s not your only option though with a fanzine magazine available too:

Burnley Blackburn rivalry: There is no disputing that the biggest rivalry Burnley’s stadium plays host to is the Cotton Mill derby between Burnley and Blackburn Rovers. The two sides are separated by just 13 miles and have a vast history of facing off having come through the football leagues together; both were founding members.

Burnley also have smaller rivalries with Blackpool, Bolton and Preston. These are based off geography and aren’t nearly as fierce as the battle they face against Blackburn.

The Club offer tours of the stadium on Thursdays and non-matchday Saturdays. The cost of the tour is Adults £10, Under 16’s £5 (must be accompanied by an adult). Tours should be booked in advance by calling the Club on 01282 700001.

Thanks to Owen Pavey for providing the photo of the James Hargreaves Stand.

Thanks to James Prentice for supplying photos of the Jimmy McIlroy and David Fishwick Stands. 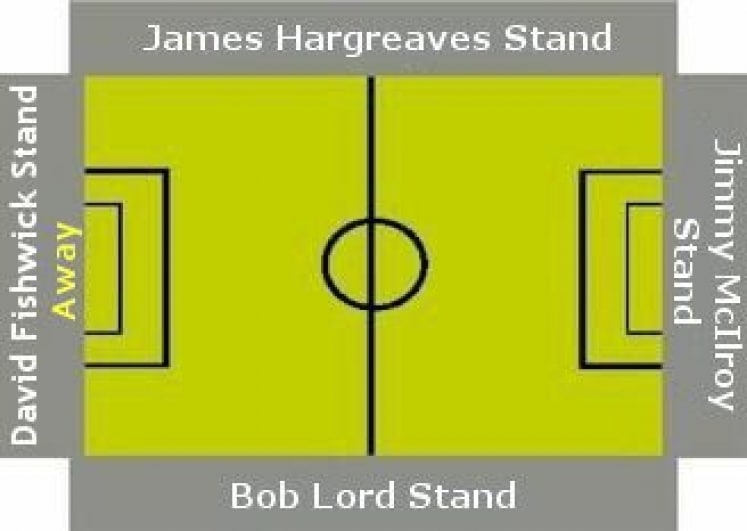