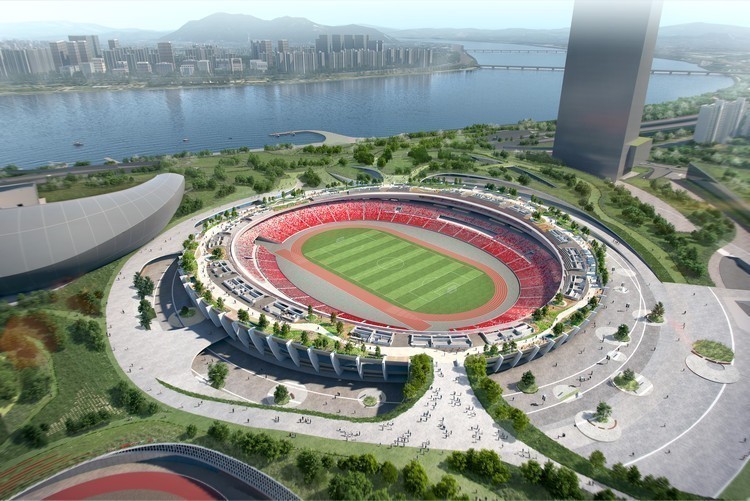 The Seoul Olympic Stadium is one of the several playing venues that was built for hosting the Summer Olympics 1988. One of the largest of its kind in South Korea, Seoul Olympic stadium has the potential to hold close to 70,000 spectators. It is also a stadium with plenty of sky boxes and VIP seating area for an opulent experience when watching Seoul E-Land FC play on this ground. The stadium is located in the capital city of South Korea, Seoul. The stadium happens to be a part of a complex that also has amusement rides, parks, shopping centre, a large cinema, and more. The initial capacity of ground was around 100,000, but it was later reduced to just under 70,000. On a few occasions, the South Korean national team has been utilising the facilities before it completely came into the hands of the K League 2 outfit in 2015.

The mammoth size of the Seoul Olympic Stadium will certainly be intimidating for visitors at first. The ground has three tiers in which supporters are seated. The tiers flow through the stadium rather than being separated into identifiable sections. The overall inclination of the seating arrangement is very gradual and it is not something that will be reflected of the style seen in most European stadiums. This will be the biggest difference for visiting supporters, who also have to contend with the sizeable distance between the seats and the pitch. The running track and the oval nature of the ground make the seats behind the goal quite far away. The seats on the long sides are also slightly far away but not to the extent of the other sections.

The location of the ground near the Han River makes it an unmistakable destination in the city of Seoul. Since it is located relatively to the centre of the city, it can be quite difficult to reach the stadium by car. Even then, if taking a car to the ground is of absolute priority, it is better to use a satnav address as follows:

There is plenty of parking available on the premises and users should face no trouble when trying to find a spot for their cars. In fact, there are spots available for small vehicles and large vehicles. The small vehicles attract a fee of 1000 won for an hour and 500 won for every 15 minutes additional. For larger vehicles, the fee is 12,000 won.

The ground is connected very well with the other parts of Seoul using the subway system. For someone who is trying to get from the primary station in Seoul, there are many trains that Lee for the Sports Complex Station, which is about 1.3 km away from the Olympic stadium. It takes around 45 minutes through a subway from the Seoul Station. The cost of the same should not be more than 3000 won. At the same time, a taxi would cost around 19,000 won depending on the traffic. However, this is much faster since it would take only around 15 minutes to make the journey.

The airport is about 30 minutes drive away from the stadium. However, a taxi fare would easily cost around 40,000 won whereas one can also take a subway, which will cost around 2300 won with the journey time being almost twice that of a taxi. There are also several buses that ply from the airport to the stadium and these would cost around 7000 won for a one-way trip.

The ticket prices for watching Seoul E-Land play at the Seoul stadium is extremely low. This could partly be due to the current league status of Seoul E-Land, as the team are only the second division. If the team play in the top division, the prices could be slightly higher. The cost for watching a match at the Seoul Olympic stadium depends on the type and category of the opponent. A high profile game would end up costing more than a regular match.

The Seoul is a modern facility that was constructed in the 21st-century. Hence, it is not a surprise that the decent amount of attention is paid to making sure that disabled fans do not face any trouble when trying to grab a viewing point for the matches. The focus on disabled fans can be clearly seen with Seoul Olympic stadium offering a 50% discount on parking tickets for people with disabilities. There are also special entrances and accessibility features spread throughout the stadium so that even people with wheelchairs are able to visit.

There are tours organised by the Seoul sports facilities. Despite being several decades old, the stadium still manages to hold its own almost many compatriots in South Korea. As a result of hosting matches involving the South Korean national team, the ground has gained a lot of prominence, history, and popularity. The tours are a great option to explore from within and visitors get to enjoy many facets of the ground without the crowd or match day experience.

Be the first to leave a review of Seoul Olympic Stadium (South Korea)!