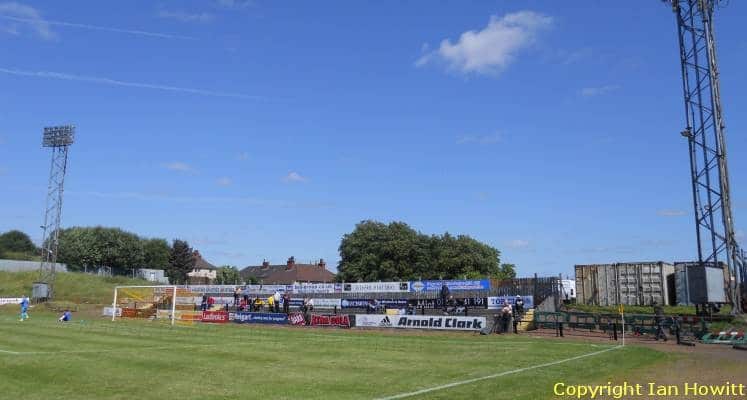 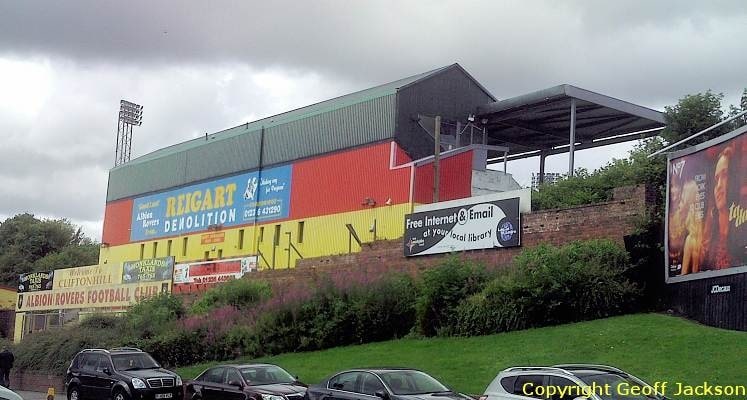 From the outside Reigart Stadium looks interesting as from the roadside the bright colours and raised elevation of the Main Stand, certainly catch the eye. However on the inside you quickly see why the ground is is not one of the better in the League having only two sides open to spectators for matches. On one side is the small Main Stand, which is a strange looking affair, as at some point it has had an extension to its roof bolted onto the front. It has wooden seating to the rear and terracing to the front, with several supporting pillars which may impede your view. However, the terraced paddock is no longer in use. Opposite is the reasonably sized covered Albion Street Terrace. This terrace runs about half the length of the pitch. Again, this simple stand has several supporting pillars. It is a pity that this terrace has been closed for a number of years now due to safety concerns. In 2015 a small open terrace was constructed at the Airdrie End of the ground, whilst the opposite West End is unused. There is a cinder track that runs around the playing surface and at one time the ground was also used for speedway meetings as well as greyhound racing. The stadium is also overlooked by a number of residential properties located above the Albion Street side.

Dave McIntosh  adds; 'The current floodlighting system in place at Cliftonhill, originally came from Cardiff Arms Park when it was demolished to make way for the Millennium Stadium'.

In 2018 the Cliftonhill Stadium was renamed the Reigart Stadium in a three-year corporate sponsorship deal.

Albion Rovers have announced their intention to leave Cliftonhill Stadium and move to a new 3,000 capacity ground. The Club are currently investigating possible locations for the new stadium, including one at Whifflet, which is close to the site of the old Rovers ground which they played at between 1884 & 1919 before they moved to Cliftonhill. The proceeds of the sale of Cliftonhill would be used to finance the new ground.

Away fans are housed in part of the Main Stand at one side of the pitch. Stefan a visiting fan from Germany adds; 'When I was there, they played East Stirlingshire. There was no trouble at all with visiting fans and the fans of both clubs were mixed in the together in the Main Stand. The stand itself had a nice small bar at the back of it, which I enjoyed before the game. On the whole there was a very welcoming atmosphere at Cliftonhill'. However, fans are now normally segregated in the Main Stand.

Michael Cooper informs me; "There is a bar at the stadium itself which is aptly named 'The Rovers Return'. However, this bar doesn't open for every match, only the more high profile ones when a larger attendance is expected. The nearest pub to the stadium is called 'Owens Bar', where away fans are welcome. Owens Bar can be found a five minute further down the A89 towards Airdrie, by the fire station.

Leave the M74 at Junction 5 at take the A725 towards Coatbridge. Continue on the A725 into the centre of Coatbridge and on reaching a large traffic island (where you can see the floodlights of the ground up on the right), turn right onto the A89 towards Airdrie. The ground is a short distance down this road on the left. Street Parking.

The nearest railway station is Coatdyke, which is about a ten minute walk away from the Cliftonhill Stadium. As you come out of the station bear left and proceed up Quarry Street. Continue over the crossroads (with a shop on one corner) and after about a quarter of a mile a church on your right. At the end of Quarry Street turn left onto Muiryhall Street and then turn right onto Main Street. Pass the Fire Station on the left and then Owens Bar. Continue along the Main Street and you will reach the stadium on your right.

Find Hotels in Glasgow and Coatbridge

Map Showing The Location Of The Reigart Stadium In Coatbridge

Special thanks to Ian Howitt and Geoff Jackson for providing a photo of the Cliftonhill Stadium Albion Rovers. Check out Geoff's Cumbrian Groundhopper blog.