Hampden Park is a modern all seated stadium. Although not particularly large for a national stadium, it still retains its charm and individual character which is enhanced by it’s completely enclosed oval shape. Three sides of the stadium are single tiered, but the South Stand on one side of it, has a small second tier, which slightly overhangs the lower one. Normally this may mean that the stadium would look imbalanced, but it has been well integrated with the rest of the stadium with oval stadium roof rising gently towards this stand. There are also two electric scoreboards which are suspended underneath the roofs at either end of the stadium. One unusual aspect of the stadium is that the team dugouts are actually situated six rows up on the South Stand. This is to allow team managers to get a better view of the game.

The Club have agreed to sell Hampden Park to the Scottish Football Association. As part of the deal the Club will move into the adjacent Lesser Hampden ground, which will be improved and have a capacity of around 1,700. This is expected to happen for the start of the 2020/21 season.

The facilities within Hampden are great, plus the leg room and view of the playing action, are also both good. On the good-sized concourse there is a small club shop and refreshments on sale include; Hampden Scotch Pies (£2.30), Steak Pies (£2.90), Cheese and Onions Pies (£2.70), Hot Dogs (£5), Chips (£2.60) and Hot Drinks (£2.30). Apparently the Hampden Scotch Pie contains a slice of a Lorne Sausage. In addition, the Club also offers a matchday Special Pie (£3.90) which is a different offering each game but has included Chicken Curry Pies and Steak & Haggis Pies in the past.

Although a pleasant afternoon out, crowds of around the 5-600 mark, in a 52,500 seater stadium, does little for the atmosphere. In fact at times, you would be thinking that you were attending a reserve match, with the players’ voices echoing around the ground. Still the p.a. system stills booms around the stadium before the game and at half time, the electric scoreboards are in operation and there is still a game of football to be watched.

On my last visit against Albion Rovers, five minutes before kick off, there was a fair queue for refreshments. An Albion fan shouts to his friend in the queue; ‘Hurry up Willie, or else we’ll not get a seat!’. That brought a smile to my face considering that there were around 52,000 empty seats inside the stadium.

There is the Queens Park Social Club, in Somerville Drive (adjacent in office accommodation to the nearby Lesser Hampden ground), which allows in away fans. Beyond the East side of the stadium (and tucked behind a handy Greggs Bakery and a Bookies) is the Montford House pub, which is located on Curtis Avenue (just off Aikenhead Road). Over on the opposite West side of the Stadium near Mount Florida Station is the Mount Florida pub on Battlefield Road and nearby the Clockwork Beer Company on Cathcart Road. (going away from the city centre). The Clockwork is a spacious pub which brews its own beers and stocks a wide range of vintage whiskies.

Leave the M74 at Junction 1A and take the A728 towards Polmadie/King’s Park/Hampden. At the T-junction with traffic lights, bear right onto Aikenhead Road. After about half a mile you will go through a set of double traffic lights with the Toryglen Football centre on the left. Carry-on, straight through these lights and the Aikenhead Road beers round to your right and Hampden Park. The main entrance is off Aikenhead Road on the right and this leads up to a large car park which is free, located behind the South Stand.

The nearest railway stations to Hampden Park are Mount Florida and Kings Park. Both are served by trains from Glasgow Central (journey time around 10-15 minutes) and are around a five minute walk away from the stadium.

Concessions apply to Over 65’s, Under 17’s Students and Unemployed.

The Club no longer produces a paper programme, but instead, have a digital version that can be downloaded from the Queen’s Park FC website. On the day of the game, a paper teamsheet is available in return for a charity donation to a local hospice.

44 wheelchair spaces are available within the South Stand, as well as provision for an accompanying carer. There are also 55 places for ambulant/blind persons (guide dogs are allowed). Disabled supporters and their carers are admitted free. Places do not normally have to be pre-booked but it would be of courtesy to the Club to do so by calling them on 01224-650423.

For Hampden Park:
149,415 – Scotland v England, 1937.
This is the record for the largest attendance at a football match in Britain.

For all those ground enthusiasts out there, then make sure you take a peak at the old lesser Hampden, behind the West Stand. This is a small old ground, that has quite a quaint looking stand at one side of the pitch. In the past it has been used by Queens Park reserves, as well as for the odd first team outing.

The stadium is also the home of the Scottish Football Museum, which opened it’s doors in May 2001. I was thoroughly impressed not only with the standard of museum, but also the vast array of items that can be seen. From a ticket from the first ever Football International held in Glasgow in 1872, to an exhibition of football related ‘toys’. The current Scottish Cup is also available to view within the museum. What I particularly liked was the emphasis on the fans involvement in the Clubs, from the first fanzines to the Tartan Army. The museum is a must for any true football supporter.

The museum is open daily from 10.00am to 5pm (Sunday’s 11am-5pm, Last admittance all days – 4.15pm). Entrance costs £5.50 for adults and £2.75 for concessions. Tours of the stadium are also available on non matchdays for an additional charge of £3 adults, £1.75 concessions. Alternatively if you wish you can just book a tour of the stadium which costs £6 adults, £3 concessions. If you have an enquiry you can ring the museum on 0141-616-6139. Queens Park offer on matchdays a joint ‘museum entry and matchday’ ticket for just £10.

Map Showing The Location Of Hampden Park In Glasgow 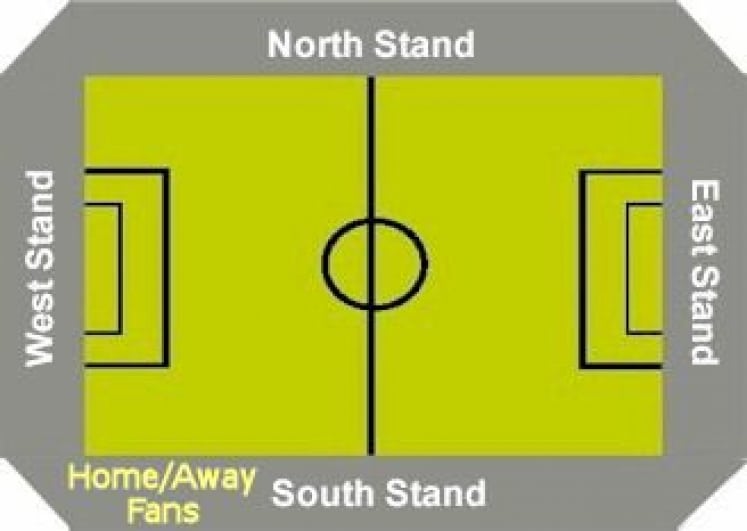