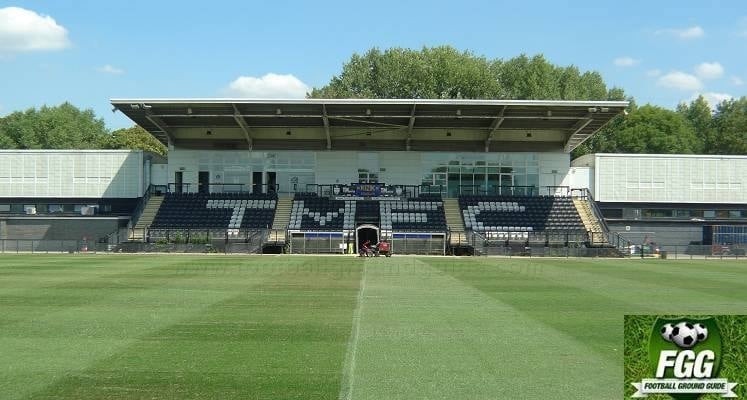 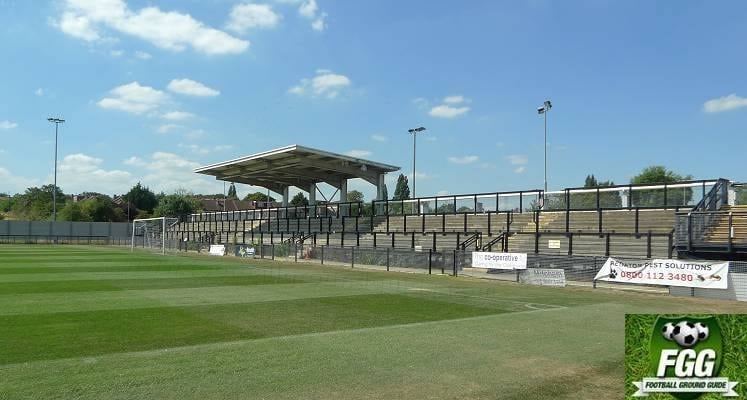 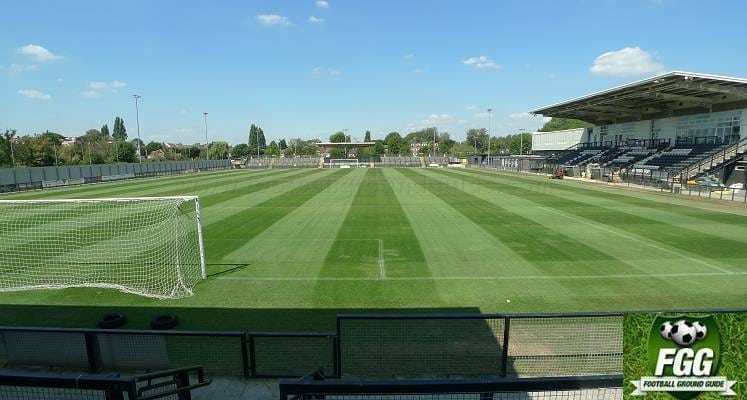 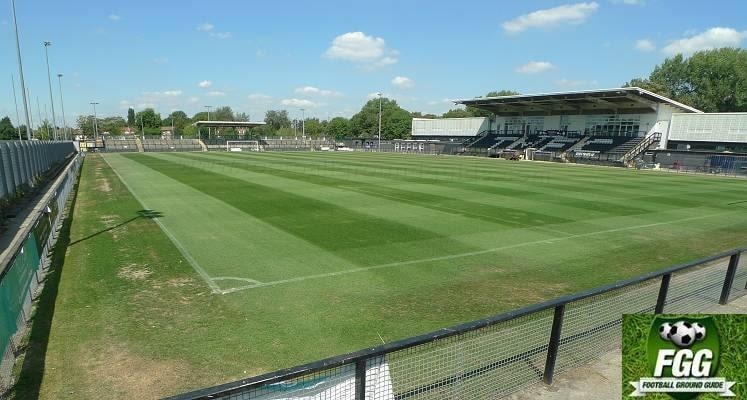 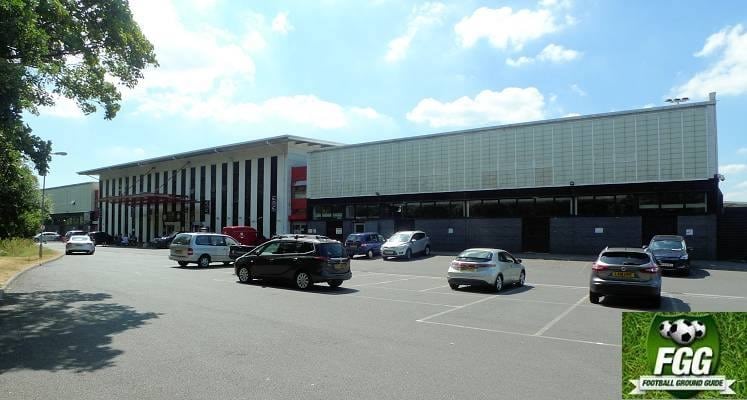 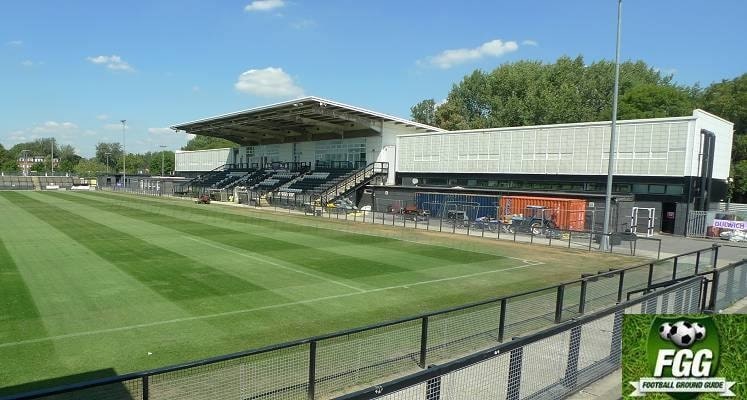 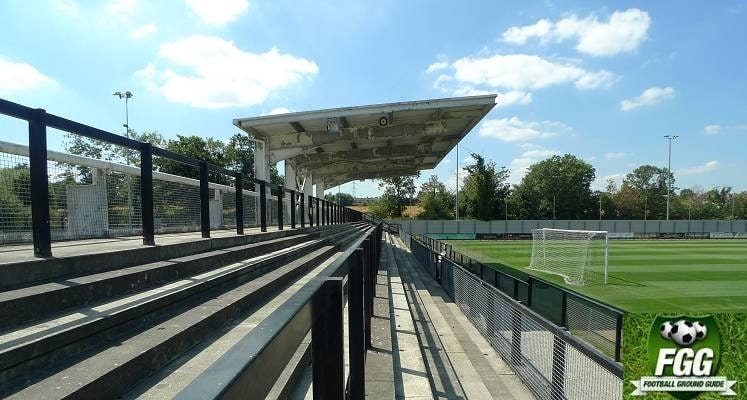 Although a relatively modern ground, having opened in 2002, it does have a bit of character from the striking striped exterior of the Main Stand, to the odd-looking terrace covers at each end. The smart-looking Main Stand on one side of the pitch, is all seated and covered. It is free of any supporting pillars, meaning that supporters get a good view of the playing action. There is a glassed frontage area at the back of the stand for club offices and the stadium announcer. The Main Stand runs for about half the length of the pitch and sits astride the halfway line. The roof of the stand is pitched quite high up as it is attached to a large building behind, which almost extends the full length of the pitch. Normally such buildings located so close to the stadium would normally be a bit of an eyesore, but this building has a modern look and does not look out of place. The team dugouts are located in front of the Main Stand, on either side of the Players Tunnel. The other side of the ground is mostly a strip of a flat standing pathway that runs behind the pitch perimeter fence. Towards the middle, it does have a couple of concrete steps and some old railway sleepers for fans to stand on.

Both ends are virtually identical being two good sized terraces that are tall and have a portion of cover behind each goal. The covers on each of these ends are quite striking with their angled cantilevered roofs. Although they do provide some cover on a largely open terrace, then oddly they do not have any retaining back wall and hence are open to the elements, meaning that wind and rain can blow into the stand from the rear. The stadium has a set of eight floodlights four of which run down each side of the ground. The Imperial Fields Ground was renamed the KNK Stadium in early 2018 in a corporate sponsorship deal.

Tooting & Mitcham play in the BetVictor Isthmian League South Central Division, the eighth tier of English football. This is at Step 4 below the Football League and two Leagues below the National Leagues North and South.

Normally visiting fans are made welcome and a sign of this is that fans are very rarely segregated at the ground. Imperial Fields must be the only ground that has a fast food outlet on one corner called the Shak which sells Carribean Food. It offers matchday specials, so if Jerk Chicken or Goat Curry takes your fancy then this is the place to head for. If you are more traditional in your food tastes, then inside the ground you can sample a range of Pukka Pies; Steak, Chicken and Mushroom, Beef and Onion (all £2.50) and Sausage Rolls (£1.50).

There is a small club bar inside the Main Stand, that is accessed from the car park. The bar which has a large screen and shows televised sports normally welcomes visiting supporters and is open throughout the game. And at this level, you are allowed to take your beer out to pitchside to watch the match! Just under a ten minute walk away from the stadium on London Road in Mitcham (and close to the Mitcham tram stop), is the Casuarina Bar & Restaurant. The bar shows Sky & BT Sports and also has a beer garden. If arriving at Mitcham Junction Station that not too far away on Carshalton Road is the Crown of Mitcham which also offers reasonably priced food. The Imperial Fields Ground is about a twenty five minute walk from the pub. On reaching the top of the station approach, turn left and the Crown is further down this road on the right.

Leave the M25 at Junction 8 and take the A217 towards Sutton and London. Keep on the A217 for just under 11 miles passing Sutton and Cheam and then towards Mitcham. Just before reaching Mitcham itself, the entrance to Imperial Fields is on the right side of the A217, opposite a BP Petrol Station. There is a fair sized car park at the ground which is free, otherwise street parking, on side roads off the A217.

The nearest railway station is Mitcham Junction which is just over a mile away from the Imperial Fields ground, or around a 20 minute walk. However from Mitcham Junction, (which is served by trains from London Victoria), you can take a tram to Mitcham. From the Tramlink stop the ground is about a five minute walk away. Just walk up the exit path from the tram stop to the main road, where you turn left. The entrance to Imperial Fields is further along this road on the left.

By Tube
The nearest tube station is Morden and is around a 20-25 minute walk away. It is situated on the Northern Line.

Find and Book Your Hotel Accommodation & Help This Website

If you require hotel accommodation in Surrey or Central London then first try a hotel booking service provided by Booking.com. They offer all types of accommodation to suit all tastes and pockets from; Budget Hotels, Traditional Bed & Breakfast establishments to Five Star Hotels and Serviced Apartments. Plus their booking system is straightforward and easy to use. Just input the relevant dates and click on “Search” below or on the hotel of interest on the map to get more information. The map is centered on the football ground. However, you can drag the map around or click on +/- to reveal more hotels in London.

Map Showing The Location Of The Imperial Fields In Morden

If there is anything that needs to be updated or if you have something to add to the Guide to the Imperial Fields in Mitcham then please email me at: contact@footballgroundguide.com.