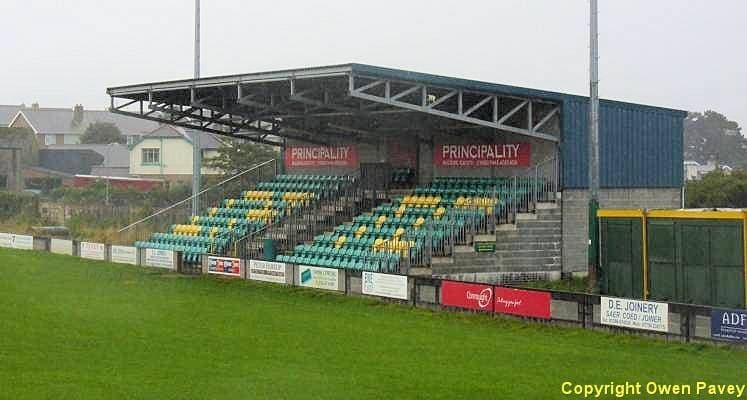 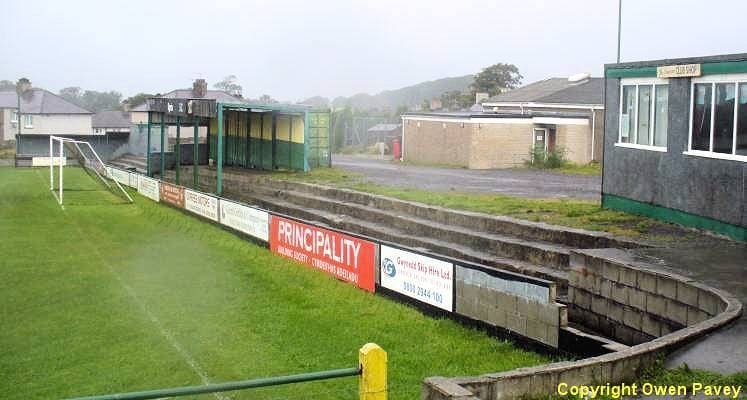 The Oval is quite an open ground with portions of open standing areas on three sides. On one side is the small but smart looking Main Stand. This covered all seated stand is free of any supporting pillars and gives good views of the pitch. Sitting astride the halfway line it runs for around a third of the length of the pitch, with flat standing areas on either side. Unusually the team dugouts are not located in front of the Main Stand, but on the opposite side of the ground on the East Side. This leads to a procession of players and club officials at half, and at full time. This side of the ground is largely open standing areas, although one side running up towards the Club Shop in one corner, the standing area is elevated, with a sizeable fence running along it to prevent fans from falling. Located on the halfway line on this side is an odd looking two storey structure, that amongst other things encompasses the television gantry and press area. The team dugouts are situated directly underneath this structure and a small roof has been attached above them to provide some shelter from the rain.

At one end is a small covered seated stand, called the Hendre End. Although only three rows high and having a number of supporting pillars running across the front of it, it does extend the full width of the pitch. Interestingly the seats from this stand came from Shrewsbury Town's old Gay Meadow ground. Opposite at the Marcus Street End is a largely open terrace which has a small basic looking covered area behind the goal. The ground has a set of eight floodlights, four of which are located down each side. There is a noticeable slope to the pitch crossing from the East side towards the Main Stand. The Oval is located in the middle of a residential area and with the ground being quite open, it is overlooked by a number of houses.

Normally there is no segregation of fans at the Oval, apart from the odd local derby match. Usually, a friendly welcome awaits the visitor and the facilities are adequate. If looking for an alternative for food then nearby on South Road is a Tesco's Supermarket and a McDonalds. Caernarfon itself is a pleasant town to visit.

There is a supporters club bar at the ground that normally welcomes visiting supporters. The nearest pub is the Eagles Hotel on Tithebarn Street which is around a ten minute walk away. Otherwise, Caernarfon Town Centre is around a 20 minute walk away, where there are plenty of pubs to be found, including a Wetherspoons outlet on Eastgate Street, called the Tafarn Y Porth, which is listed in the CAMRA Good Beer Guide. Also listed in the Good Beer Guide is the Black Boy Inn on Northeast Street.

From the North East
At the end of the A55 North Wales Expressway take the A487 towards Caernarfon. On reaching Caernarfon continue around the town keeping on the A487 towards Portmahdog. After passing over a long bridge and reaching the Eagles Hotel, move to the left hand lane and continue straight on towards Beddgelert (A4085). Then take the third right into Segontium Road South. The Oval ground entrance is at the end of this road.

There is a car park at the ground which is free, otherwise there is plenty of street parking in the local area.

There is no mainline railway station in Caernarfon itself. The nearest station is located in Bangor located just under ten miles away. There is a regular bus service (5C & 5D) from Bangor to Caernarfon operated by Arriva. The journey time is around 20-25 minutes depending on service. See the Arriva website for more information and timetables. Caernarfon Bus Station is around a 15 minute walk away from the Oval ground.

If you require hotel accommodation in the Caernarfon area then first try a hotel booking service provided by Booking.com. They offer all types of accommodation to suit all tastes and pockets from; Budget Hotels, Traditional Bed & Breakfast establishments to Five Star Hotels and Serviced Apartments. Plus their booking system is straightforward and easy to use. Yes this site will earn a small commission if you book through them, but it will help towards the running costs of keeping this Guide going.

Map Showing The Location Of The Oval In Caernarfon

If there is anything that needs to be updated or if you have something to add to the Guide to the Oval Caernarfon Town then please email me at: contact@footballgroundguide.com.

Special thanks to Owen Pavey for providing the photos of the Oval Ground Caernarfon Town.