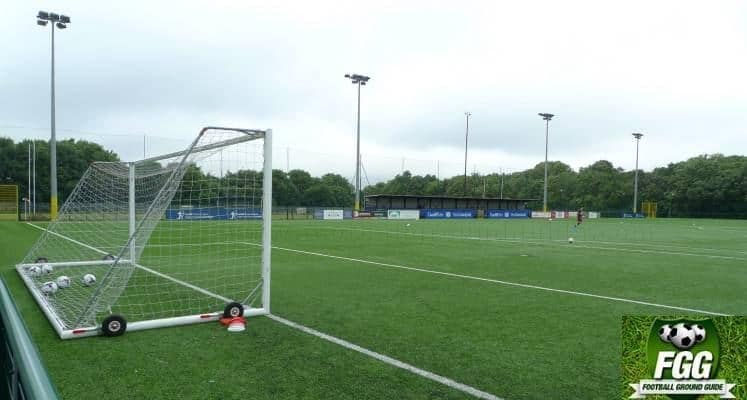 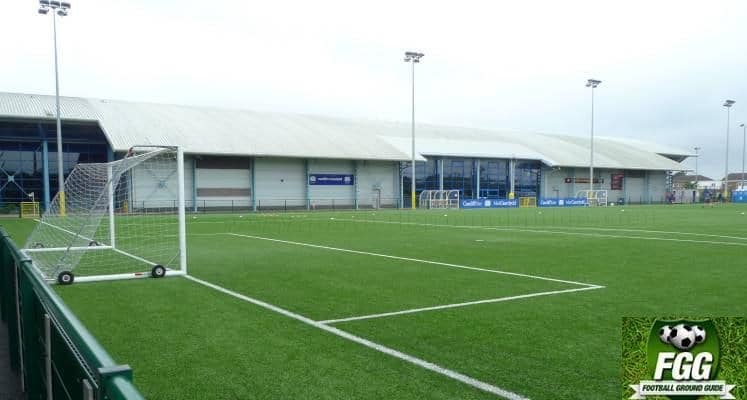 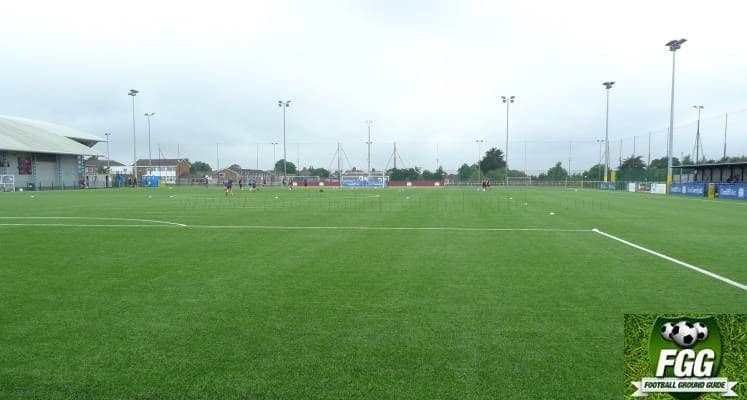 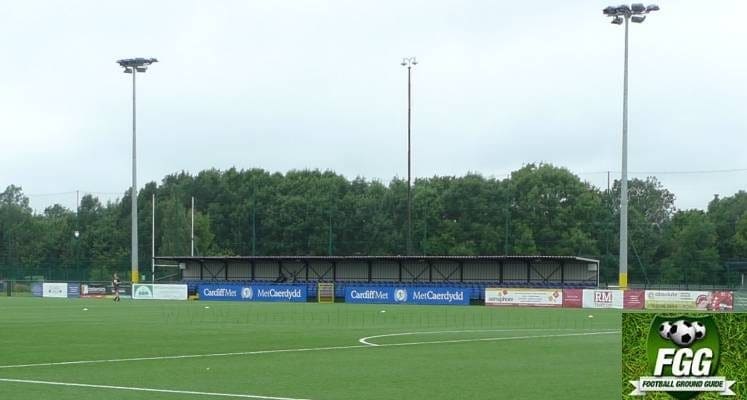 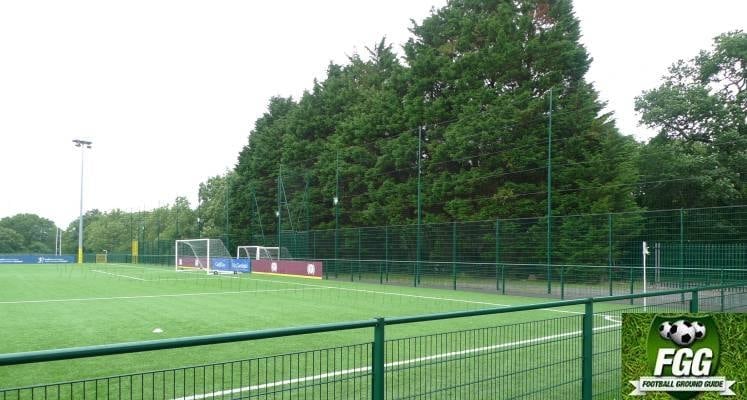 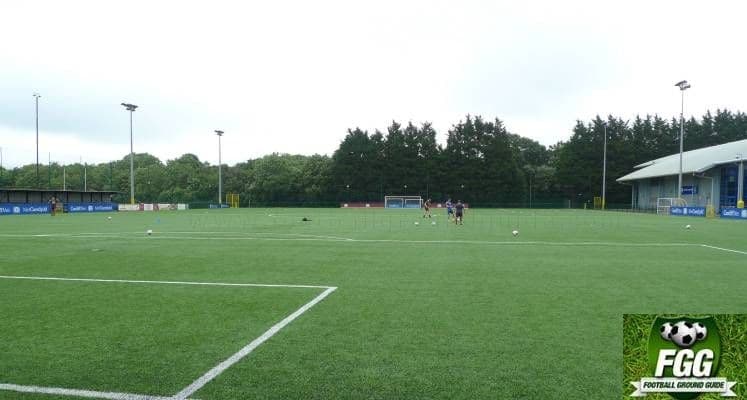 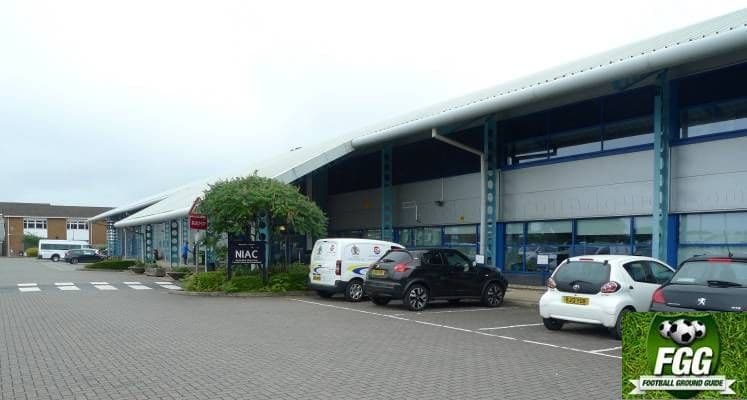 The Cyncoed Campus Stadium, is very modern only having been opened a few years ago. The stadium is overlooked by the tall National Indoor Athletics Centre, which runs along one side of the pitch. There is a fair gap between the Athletics Centre and the pitch and this is used as a flat standing area. The roof of the centre protrudes out over part of this area, giving some much needed cover if the weather turns for the worse. On the side of the Athletics Centre building is mounted a large red digital scoreboard, whilst the team dugouts are also located on this side of the stadium. Opposite is a small seated stand, which contains just under 300 seats. Although only four rows high, it is at least covered. This stands runs for around a third of the length of the pitch and is positioned of the half way line. Above the stand in the centre is a platform used for television cameras. There are open flat standing areas behind the pitch perimeter fence to either side of this seated area. Both ends are also open to the elements and consist of narrow tarmaced walkways, which are also used as flat standing areas for spectators. In one corner of the stadium in front of the Athletics Centre is a container unit, which serves as small club shop and tea bar. The team changing rooms are located inside the Athletics Centre and the teams emerge from a doorway next to the club shop. The stadium has a 3G artificial playing surface. It is completed with a set of eight floodlight pylons, four of which run down each side of the pitch.

To be honest although the stadium has been constructed to a high standard, it is somewhat sparse when it comes to spectator facilities. Toilets are a row of portaloos and the tea bar provides teas, coffees, soft drinks, confectionery and not much else. May be these will be improved as the season progresses, we will have to wait and see. Please note that spectator access is gained to the stadium along one side of the Indoor Athletics Centre (to the left hand side, if standing facing the Centre).

Alcohol is not available at the stadium. There is a bar called the Centro Bar located within the main Cynoed Campus building (not the Athletics Centre), however it is unclear at this moment in time whether this will allow in supporters on matchdays, The nearest pub is called the Discovery Inn which is located a mile away on Celyn Avenue. This pub which is listed in the CAMRA Good Beer Guide, has up to four real ales on tap at anytime. To find this pub which also serves food then; With the main reception entrance to the National Indoor Athletics Centre behind you, turn right through the car park and turn left to walk down along the side of another artificial pitch area. Then follow this road through the campus first going around to the right and then around to the left, before finally reaching the University exit. Turn right along Cyncoed Road and then take the next left into Celyn Avenue. The pub is further along this road on the left.

The Cyncoed Campus lies to the North East of Cardiff.

From Newport and the East
Leave the M4 at Junction 29 and take the A48(M) towards Cardiff, Then continue towards Cardiff as the road becomes the A48.After another 1.5 miles take the slip road leaving the A48, signposted Cardiff East/Docks/Llanederyn. At the top of the slip road you will reach a roundabout, where you take the third exit towards Llanederyn. Go straight across at the next roundabout. After passing a housing estate on your right (beware of the 30mph speed camera and traffic calming road humps along this stretch of road), you will reach the entrance to the Cyncoed Campus and National Indoor Athletics Centre on your left.

Car Parking
There is a pay and display car park at the campus, which costs 50p. If the car park happens to be full, then street parking is available on the housing estate, across the main road from the campus.

The nearest railway station is Heath, which has both a high level and low level line. Heath Railway Station is situated around 1.5 miles away from Cyncoed Campus and will take around 25-30 minutes to walk.

If instead you arrive at Cardiff Central Railway Station then you may consider taking the local service up to Heath, which run every ten minutes on a Saturday afternoon, with a journey time of nine minutes. Otherwise there is a taxi rank outside the station or you could catch the Number 52 Cardiff Bus Service which runs from the City Centre up to the Cyncoed Campus. It leaves the City Centre from bus stop KH on Westgate Street, which is the same street as the Welsh RFU shop outside the Principality Stadium (this is almost on the opposite side of the stadium to Cardiff Central Station). You can view a timetable on the Cardiff Bus website.

On exiting Heath High Level Station turn left and go under the Railway Bridge. With the Railway Bridge and Station directly behind you, crossover the road via the Pedestrian Crossing, then bear to the right and then follow the road around to the left, this is Lake Road North. Proceed straight on down Lake Road North and on reaching a roundabout, go straight ahead (second exit) into Celyn Avenue. Continue straight along Celyn Avenue passing a small precinct of shops and the Discovery pub on your right. At the end of Celyn Avenue you will reach a T-junction where you turn right into Cyncoed Road. After about a quarter of a mile you will reach the entrance to the Cardiff Metropolitan Cyncoed Campus on your left. The Cyncoed Stadium and National Indoor Athletics Centre are located at the rear of the campus from this entrance. Just follow the road through and around to the right of the campus and you will see the National Indoor Athletics Centre in front of you. Please note that the first 3G pitch you will see is not the Cyncoed Stadium, as this is located behind the Indoor Athletics Centre.

Cardiff Hotels - Find and Book Yours And Help Support This Website

If you require hotel accommodation in Cardiff then first try a hotel booking service provided by Booking.com. They offer all types of accommodation to suit all tastes and pockets from; Budget Hotels, Traditional Bed & Breakfast establishments to Five Star Hotels and Serviced Apartments. Plus their booking system is straightforward and easy to use. Yes this site will earn a small commission if you book through them, but it will help towards the running costs of keeping this Guide going.

Map Showing The Location Of The Cyncoed Campus Stadium In Cardiff 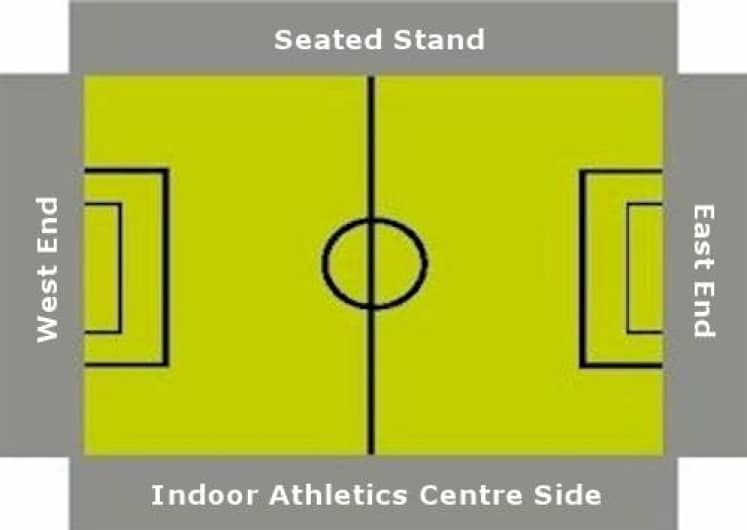