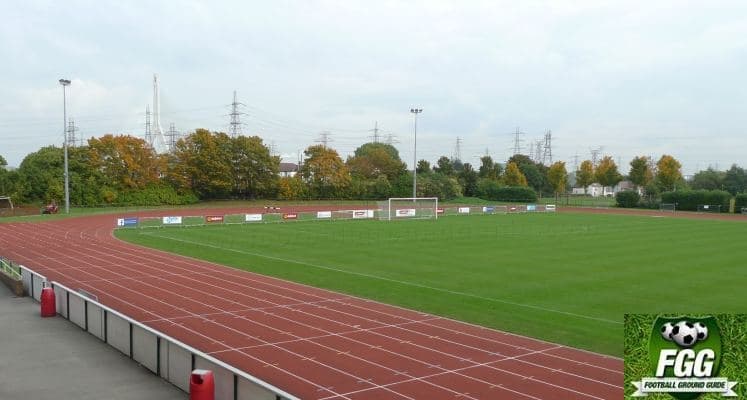 Deeside College Stadium is essentially an athletics stadium located next to the A548 North Wales coast road around a mile west of Connahs Quay High Street. The stadium site can be reached by an approach road leading off the A548 and it shares its surroundings with the various buildings of Colleg Cambria as well as a number of local businesses. As you would expect from an athletics stadium the grounds only seated spectator accommodation is set back a long way from the pitch but in compensation the view on offer from the seating deck of the Main Stand is actually very good due to it being placed directly above the dressing rooms and toilets. The concrete seating deck, holding six rows of 420 maroon coloured plastic seats is reached by two wide maroon painted steel stairwells either side of the players pitch side entrance at the front of the stand. The white "goalpost" column design supports a distinctive line of curved roof trusses, with a row of 12 floodlights arranged on the front face. The stand is flanked by a pair of modern floodlights, which have the benefit of being level with the front of the stand and therefore not interrupting the view of the pitch from any of the seats.

On the ground in front of the stand spectators can get a standing view of the pitch however this is regarded more as an access walkway than a paddock, with the roof line of the stand not overhanging enough to be able to provide any cover from the elements. There is an additional low cover to one side provided shelter for disabled supporters. Looking out from the seating deck across the pitch the eye is drawn off to the left with the impressive sight of the modern A548 River Dee Road bridge with its tall angular A-frame towers and supporting cables amongst a foreground of semi-detached houses and weaving electricity pylons. The far side of the stadium is more mundane in comparison with narrow two storey media centre and tv gantry on the pitch centre line flanked by a pair of matching floodlight pylons. Both ends are curved to suit the athletics track and though you could in theory stand on the grass behind the metal barriers to watch the action the view on offer of the pitch would be pretty poor.

Visitors are allocated around a third of the seating in the Main Stand and enjoy the same facilities as home supporters. The view of the pitch is excellent however on a wet and windy day you may find the roof line too high to keep anybody dry. Nevertheless with both sets of supporters in one stand it does give you a chance to get a good atmosphere going.

The stadium sits on a College Complex and there is no bar at the stadium itself. About a ten minute walk away is the intriguingly named 'Sir Gawain & The Green Knight' pub. Situated on Golftyn Lane (turn right out of the College entrance, then take the first right into Golftyn Lane and then the pub is down on the left), this small traditional pub serves real ale and offers food. Just a little further away on Church Street is the larger Halfway House pub. (on the main road going into Connah's Quay Town Centre, turn right out of the College entrance and continue straight on, you will reach the pub on your right. If you continue into Connah's Quay, which is about a 15-20 minute walk away then there are plenty of pubs to be found.

If arriving by train, then virtually next door to Shotton High Level Station (and only five minutes walk from Shotton Station) is a Wetherspoons pub called the Central Hotel, which is located on Chester Road.

From The South (Wrexham)
Follow the A550 North of Wrexham then join the A55 at junction 35 and head West towards Northop. Turn off at Junction 33A and head towards Connah's Quay on the B5126. After a couple of miles take a left turn into Ffrord Llanarth then at the end of the junction turn left onto the B5129 Kelsterton Road. After less than a minute you will see the Dee College signposted, take a left turn into the College Grounds then at the mini roundabout turn left. Follow the road as it turns sharply to the right. You will then pass the stadium main stand on your left hand side with entrances to the car parks beyond the stadium on the left and right hand side. The home and away turnstiles for the ground are situated to the left hand side of the Main Stand.

From The West (Holyhead & Bangor)
Follow the A55 towards Northop then turn off at Junction 33 and turn right onto the A5119 Northop Road, then turn left into the B5126 Connahs Quay Road to take you back over the A55. After a couple of miles take a left turn into Ffrord Llanarth then at the end of the junction turn left onto the B5129 Kelsterton Road. Then as From The South.

From The East (Chester)
Follow the A55 South of Chester towards Northop. Turn off at Junction 33A and head towards Connah's Quay on the B5126.After a couple of miles take a left turn into Ffrord Llanarth then at the end of the junction turn left onto the B5129 Kelsterton Road. Then as From The South.

Alternatively from the East (M56)
At the end of the M56 join the A494 towards Queensferry. Then leave the A494 and take the sliproad onto the A548 (signposted Flint/Chester). At the next roundabout take the fourth exit towards Flint (A548). Cross three roundabouts and after going over the impressive looking Flintshire Bridge, leave at the next exit (signposted Connah's Quay). At the roundabout take the sharp first left hand exit onto the B5129 towards Connah's Quay. After half a mile you will reach the entrance to Deeside College on your right and car parks.

The nearest railway station is Shotton, which is just over two miles or a 40 minute walk away from the ground. Shotton is well served by main line North Wales Arriva train services between Holyhead and Chester, as well as the hourly "Borderlands line" South to North running service between Wrexham General and Bidston. Confusingly though, there are two stations called Shotton; Shotton and Shotton High Level. They are in fact only around 150 metres apart, so don't worry if you feel you have got off at the 'wrong one'. From Shotton Station descend down the pathway to the main road, at which you turn right. Go past the Wetherspoons Central Hotel pub (good for a pre-match pint) and walk straight along the High Street and then keep straight along the B5129. You will eventually reach the Deeside College Entrance and the stadium on your left.

Next to the Wetherspoons in Shotton is an office for Direct Cars (01244 814400), in case you wish to travel by taxi to and from the ground.

If travelling via Chester by bus, then Arriva Bus Service 11, starting at Chester Lower Bus Exchange stops off at Deeside College on the way to Prestatyn and Rhyl.

Adults £7
Over 65's £3
Other concessions including Coleg Cambria Students with valid ID £3
Children who become club members can gain access for £1.

If you require hotel accommodation in Chester then first try a hotel booking service provided by Booking.com. They offer all types of accommodation to suit all tastes and pockets from; Budget Hotels, Traditional Bed & Breakfast establishments to Five Star Hotels and Serviced Apartments. Plus their booking system is straightforward and easy to use.Yes this site will earn a small commission if you book through them, but it will help towards the running costs of keeping this Guide going.

Special thanks to Owen Pavey for providing the information and Deeside College Stadium layout diagram.