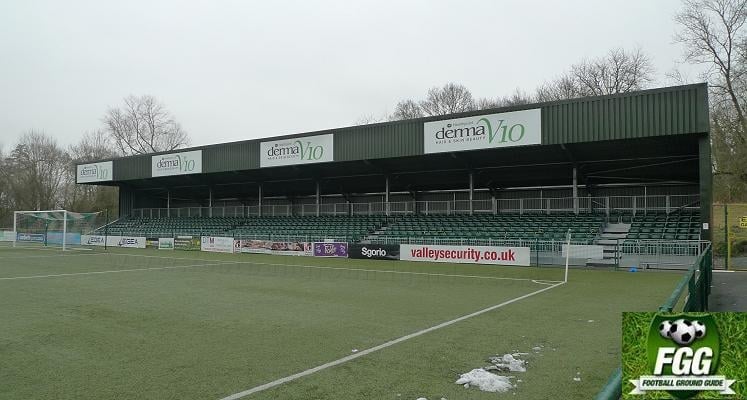 Park Hall is situated around one and half miles north east of the English town of Oswestry, and a similar distance south of the small town of Gobowen. To be honest, if feels like it is in the middle of nowhere.

Park Hall, was the former home of Oswestry Town and was until a few years ago an athletics circuit with a small stand on the south side. This stand has now been replaced by a sprawling 2 level complex called The Venue, which consists of a large car park, a bowling alley, and a fitness centre on the top floor, and the football club offices, dressing rooms on the lower floor leading out to pitchside. The former athletics circuit has been removed and replaced by an artificial playing surface and modern corner floodlights which can be adjusted to community use on non matchdays. Two sides of the ground look out onto a countryside setting, sheltered by a row of trees that once surrounding the oval shape of the athletics circuit. The ground itself does have a perimeter fence, but not of the type you would normally associate at a football ground, as the whole pitch is visible from the football traffic car park at the Burma Road end.

The North and West sides of Park Hall are essentially the same, a narrow strip of flat standing tarmac surrounds the pitch with the remains of the athletics circuit now outside the borders of the ground. This leads all eyes to focus on the facilities on the south side or The Venue side of the ground. The structures from the outside rather give the impression that Park Hall is a well developed stadium, but this is not the case. There is a temporary seating structure on the South side. A narrow all seated stand with a canvas roof, with a capacity of just under 300 sits towards the East End. For bigger games then additional temporary seating can be brought in to sit directly in front of the bare wall of the Venue. Above this area is a viewing balcony which is accessed by a metal staircase at the side of the players entrance.

However the stadium has been improved with the opening in 2012 of a new semi-permanent structure at the East End. This covered all seated stand has a capacity of 500. Currently it only runs for half the width of the pitch ending just behind the goal, but it is hoped that at some point it can be doubled in size to fill the whole end and have corporate hospitality boxes incorporated at the back of it.

There are plans to increase the capacity of the stadium to 3,000 by further extending the East End Stand, so that it runs the full width of the pitch and installing more temporary seats on the Venue side.

There is a bar at the ground, however due to its rather rural setting there are no pubs, bars or eating places in the surrounding area of the ground. There is plenty of choice in Oswestry town centre. However this is a 30 minute walk from Park Hall Stadium.

If arriving by train at Gobowen, then very close to the railway station is the Cross Foxes pub.

From The North
Follow the A5 towards Shrewsbury. Just before you reach Oswestry there is a roundabout which is the junction of the A495. Take the first exit at the roundabout onto the A495 towards Whitchurch. Then take the second left hand turn onto Burma Road. You will reach the ground on the right hand side.

From The South
Follow the A5 Oswestry bypass towards Gobowen, turn right at the roundabout into the A495 and head towards Ellesmere. Turn left into Burma Road. You will reach the ground on the right hand side.

From The East
Take the A495 from Ellesmere, through the village of Whittington. Once over the railway line turn right into Burma Road. You will reach the ground on the right hand side.

From The West
Take the A495 from Oswestry town centre, travel north along the B5069 Gobowen Road then turn right into the B4580 Whitington Road.At the A5 roundabout continue along the A495 road towards Ellesmere, turn left into Burma Road. You will reach the ground on the right hand side.

Car Parking
There are car parks at the ground situated by the venue and behind the West End of the stadium. For bigger games then sometimes (if the ground is relatively dry) additional parking is  made available in an adjacent field, just off the entrance road to Park Hall.

Directions from Gobowen Railway Station Walk along the railway station platform and exit next to the level crossing. At the junction ahead of you turn right into Old Whittington Road, going past the fish and chip shop of your right hand side. Follow this road for 20 minutes then once you have passed the entrance of Derwen College on the right hand side, turn right into a country lane, this will take you back over the railway line and towards a hospital complex. Once opposite the hospital building turn left into North Drive. The ground entrance is 10 minutes walk on the left hand side. In total is around a 35 to 40 minute walk.

Oswestry town centre can be reached by buses from Shrewsbury and Wrexham. Either take a taxi up to the stadium or you can embark on a 30 minute walk:

Directions from Oswestry Bus Station
When you come out of the bus station look for the old railway station building. Follow Oswald Road away from the town centre towards Gobowen.At the junction continue into Gobowen Road then after 5 minutes walk take a left turn into Whittington Road to lead you onto the A5. At the A5 roundabout continue walking along the A495 and after another and minutes take a left turn into Burma Road. The ground is 5-10 minutes walk from this point, on the right hand side.

Map Showing The Location Of The Park Hall Stadium Near Oswestry

Special thanks to Owen Pavey for providing the information for this page, plus the layout plan of Park Hall Stadium.