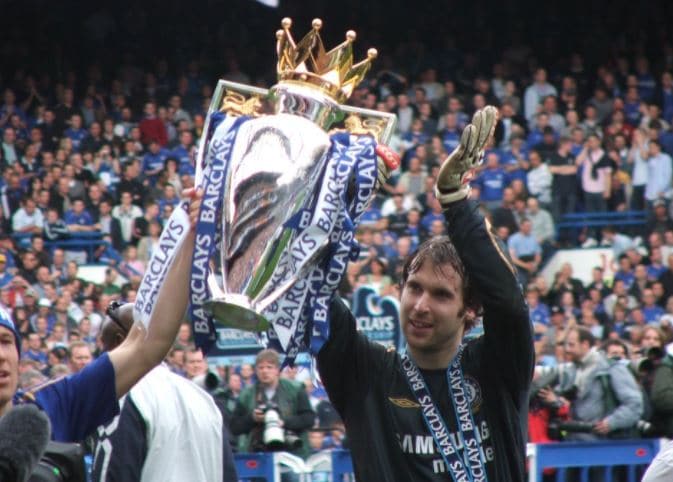 The inaugural Premier League trophy went to the hands of Manchester United, as Sir Alex Ferguson was able to lead the club into an era of success. Aston Villa finished in the second spot followed by Norwich. This was the eighth league title for United, who had Eric Cantona and Mark Hughes score 15 goals each.

Manchester United were able to retain the league title quite comfortably after overcoming Blackburn’s challenge with an eight-point advantage. Once again, United depended on goals from across the squad, as the club’s top scorer Eric Cantona was nowhere near the league’s top scorer – Andy Cole.

The Premier League witnessed a new team winning the title first time, as Blackburn beat United by a point to the title. The goals from Alan Shearer were instrumental in helping Blackburn win the title, as he finished as the Golden Boot winner with 34 goals.

Manchester United were able to reclaim the league title from Blackburn with a commanding performance of the 38 games. The Red Devils won the league with a four-point advantage. Eric Cantona was once again the crucial player for Sir Alex Ferguson’s men as he came in with 14 goals.

Sir Alex Ferguson once again ensured that United would finish top of the pile with a seven point advantage over Newcastle United. This was one of the thrilling title races, as Newcastle – backed by the goals from Alan Shearer – almost snatched the 11th league title from United.

Frenchman Arsene Wenger was able to create history by guiding Arsenal to their first Premier League title while playing an attractive brand of football. Manchester United gave tough competition for the Gunners, who won the title with a point advantage. Dennis Bergkamp was the top scorer for Arsenal with 16 goals.

Despite being involved in two other cup competitions, Manchester United were able to lift their fifth Premier League title by finishing a point ahead of Arsenal. The goals from Dwight Yorke – who scored 18 goals to finish as the joint top scorer – helped United immensely. The Red Devils went on to win the treble by lifting the FA Cup and Champions League.

Sir Alex Ferguson guided United to the sixth Premier League title and their 13th overall league title by finishing a remarkable 18 points ahead of Arsenal in the second spot. This was the biggest margin of league success in the Premier League and it was made possible with Dwight Yorke scoring 20 league goals.

Manchester United made it a hat-trick of league titles to start the new century, as they won their seventh Premier League medal courtesy of another comfortable win over Arsenal. Liverpool finished third in the standings, as their disappointment in the league continued. Teddy Sheringham was the top scorer for United with 15 goals.

Arsenal got the better of United for their second Premier League title in an era when these two teams were predominantly the top dogs in the division. Arsenal were able to get one of their big wins after finishing seven points ahead of Liverpool, as the 24 goals from Thierry Henry proved to be of great influence.

Manchester United were able to narrowly move ahead of Arsenal in the title race to pick up their eighth Premier League medal. The Red Devils beat the Gunners by five points while Newcastle came third with 69 points on the board. The 25 goals from Ruud van Nistelrooy, who finished as the Golden Boot winner, was instrumental in United’s success. This is one of the iconic league wins, as Arsenal picked up their third Premier League title without suffering a single defeat in the campaign. This led to the team being tagged as the ‘Invincibles’. Chelsea, under the influence of Roman Abramovich, finished second but a distant 11 points behind. Thierry Henry of Arsenal won the Golden Boot with 30 goals.

This campaign witnessed a new team emerge as the Premier League winners, as Chelsea lifted the title for the first time. This was only the second English league title for the blues, who finished with a then-record of 95 points. Chelsea lost only one game in the campaign while Thierry Henry retained his Golden Boot title with 25 goals.

Chelsea became Premier League winners for the second consecutive season after overcoming the challenge from Manchester United, who finished with 83 points. This was the second successive campaign in which 90+ points were posted by the leader. Thierry Henry once again picked up the Golden Boot title with 27 goals.

Sir Alex Ferguson helped United reclaim the title as Premier League winners after managing to the Chelsea in a close contest. This was the ninth title for United since the inception of the league in 1992. Chelsea finished only six points behind the leaders (89) while Didier Drogba won the Golden Boot for the first time with 20 goals.

Manchester United made it a hat-trick of league titles for the first time since the 2000-01 season. The Red Devils managed to hit the 90 point tally which help them keep Liverpool at bay and four points behind. Chelsea forward Nicolas Anelka narrowly picked up the Golden Boot award with 19 goals compared to Cristiano Ronaldo’s 18 goals.

Chelsea returned to the summit of the Premier league under the guidance of Carlo Ancelotti to pick up their third league title. Unlike in the previous two title successes which placed a lot of emphasis on defence, Chelsea scored 103 goals to create a new record. However, they beat United by just a point while Drogba finished as the top scorer with 29 goals.

Manchester United got their hands on the 19th league title in English football by a comfortable margin of nine points over Chelsea. The Red Devils had also just managed to hold off their local rivals Manchester City by a similar margin. Dimitar Berbatov became the top scorer of the league with 20 goals – a record shared with City striker Carlos Tevez.

Sir Alex Ferguson was able to wrestle back the title from rivals Manchester City to help United pick up their 13th Premier League title. The club managed to beat City by a comfortable margin of 11 points. United’s summer signing Robin van Persie retained the Golden Boot title by claiming 26 goals in his first season at Old Trafford.

Manuel Pellegrini was able to get a second Premier League winners medal for Manchester City after a close fought title race with Liverpool. The Reds finished only two points behind City, who picked up 86 points from the 38 matches. Luis Suarez of Liverpool finished as the Golden Boot winner with 31 goals.

Chelsea became Premier League winners for the first time since 2010 after marching on to the title under the guidance of Jose Mourinho. The Portuguese had returned to Chelsea for a second spell, which yielded this fourth title for the blues. Chelsea were supremely dominant and enjoyed an eight-point advantage over Manchester City, whose Sergio Aguero won the Golden Boot with 26 goals.

Leicester City created history by becoming the Premier League winners in the season. This was the first league title in the club’s history and also their first Premier League success. Claudio Ranieri was able to break the stranglehold of richer clubs. Arsenal came second in the campaign with 71 points compared to 81 points of Leicester. Harry Kane of Tottenham won the Golden Boot with 25 goals.

Chelsea won the Premier League title with Antonio Conte as the boss. This was the fifth Premier League success for the blues, who ended the campaign with 93 points – just two points shy of their record. Harry Kane once again finished as the Golden Boot winner with 29 goals, while Spurs also came runner-up with 86 points. Guardiola led City to their fourth Premier League title after managing to see off a tough fight from Liverpool, who finished just one behind Manchester City’s tally of 98 points. The season witnessed three players – Pierre-Emerick Aubameyang, Mohamed Salah, and Sadio Mane – sharing the Golden Boot title.

Liverpool became the Premier League winners for the first time in a season that was almost halted by the pandemic. After dominating for the entire season, Liverpool finished with 19 points – one shy of Manchester City’s record. Jamie Vardy won the Golden Boot with 23 goals. Guardiola took Manchester City to their 5th league title in the span of a decade.