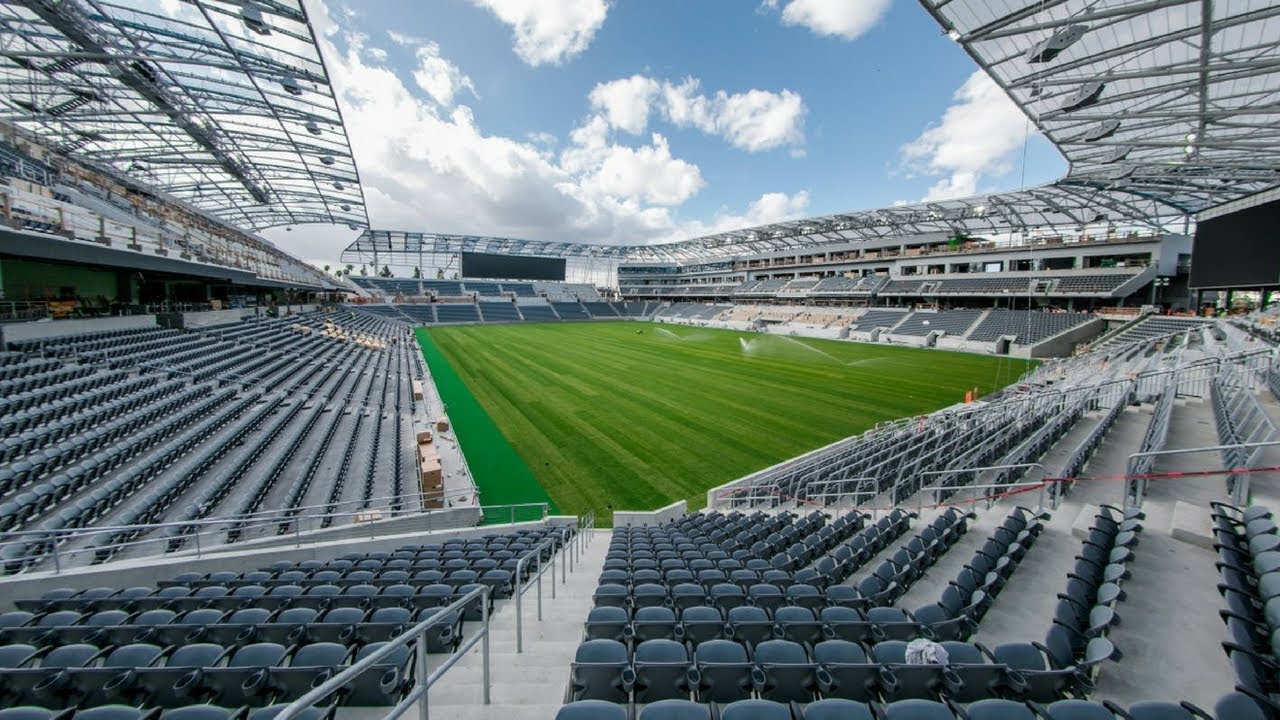 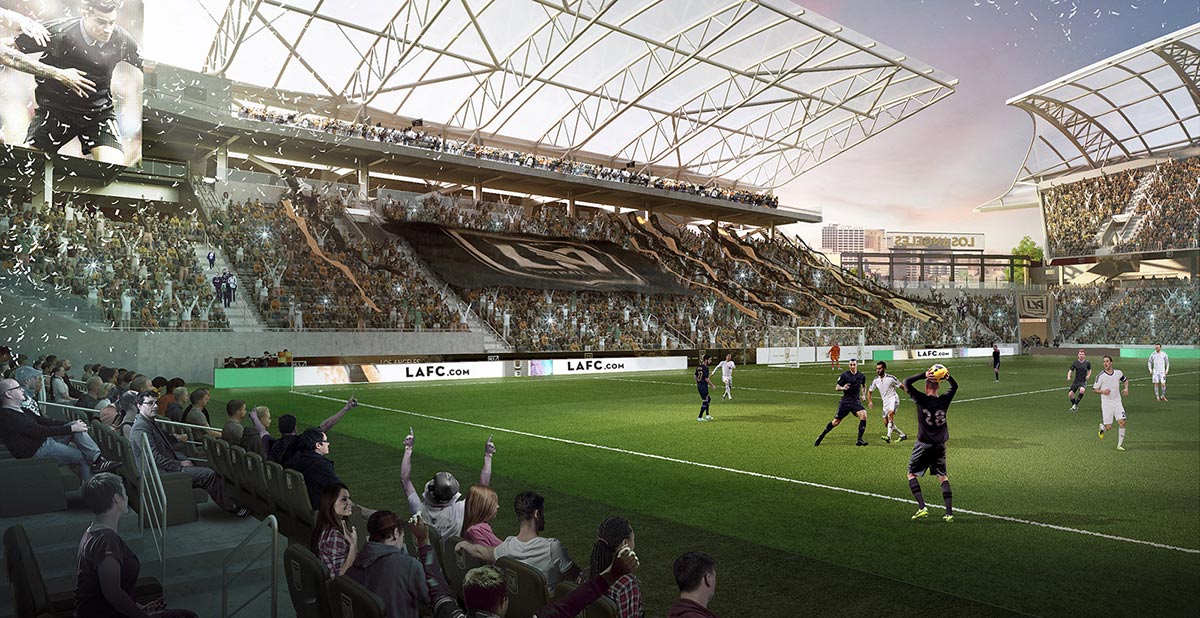 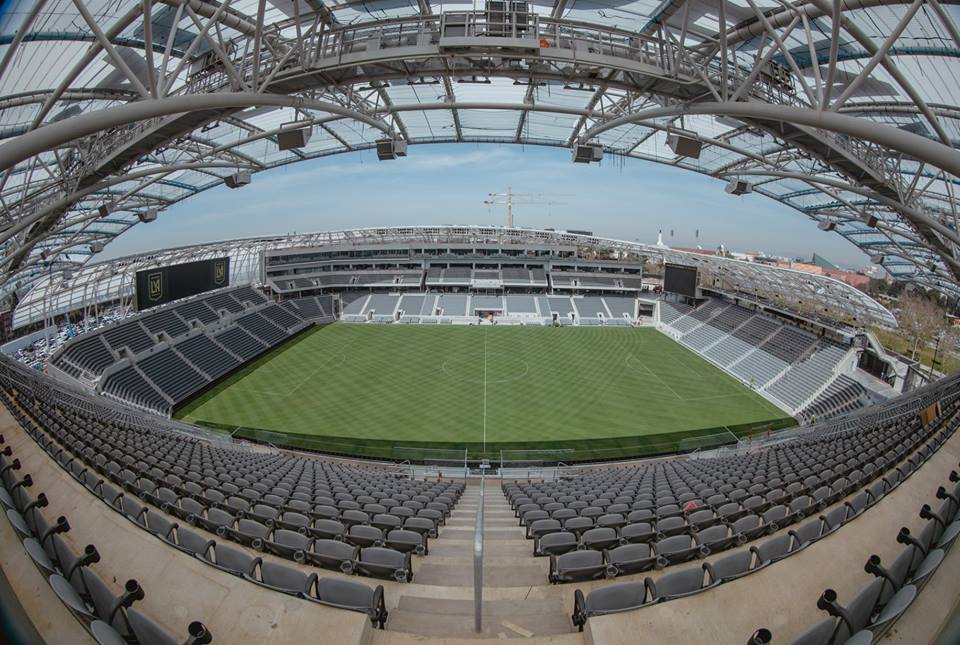 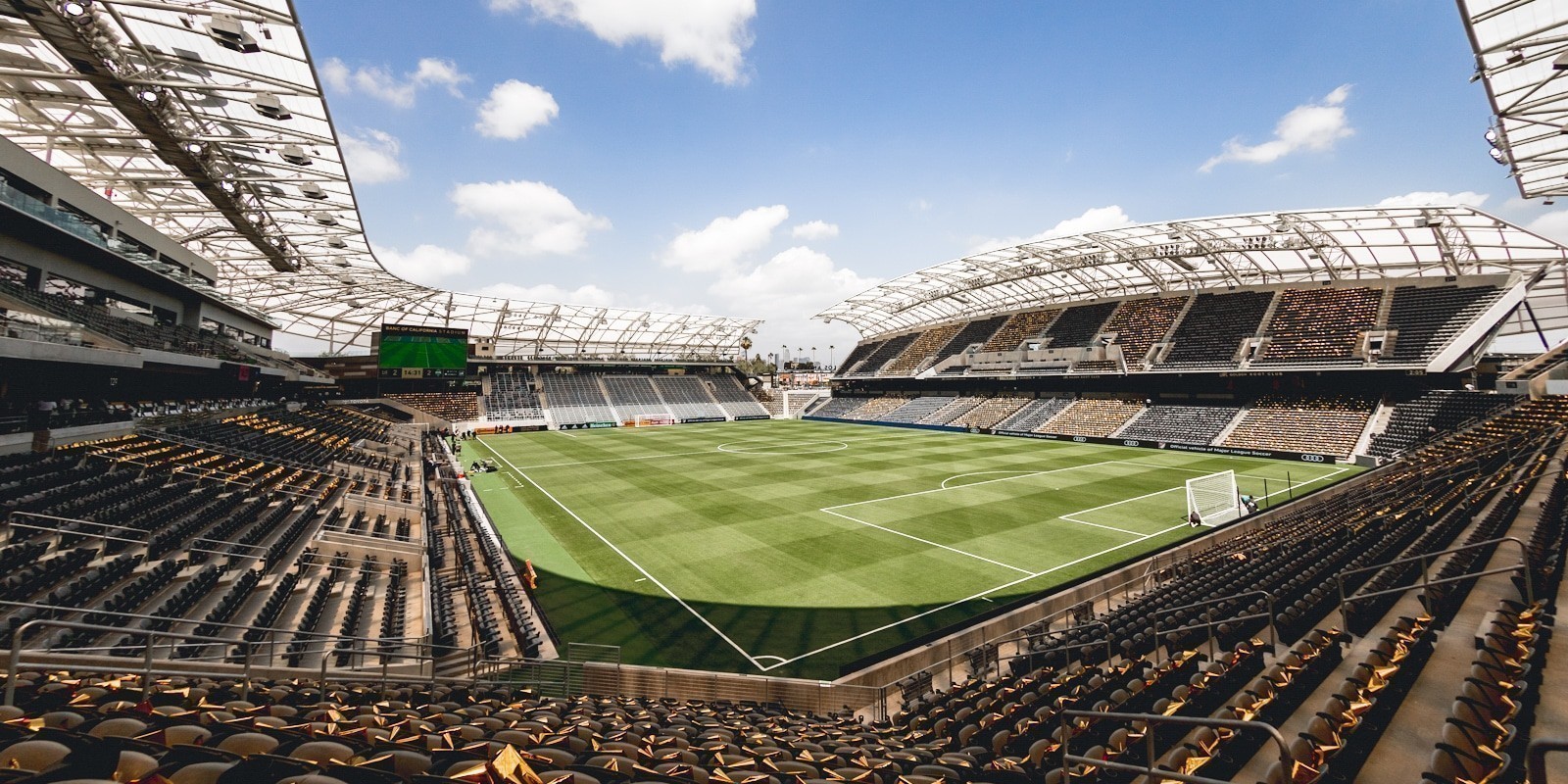 The Exterior
When you arrive at the Banc of California Stadium you might be expecting some grand photo opportunity, which is common place with a lot of stadia these days. Remember though, LA FC are a new club, it’s not like they’ll have statues of legendary players and managers dotted around. What you do have with the stadium though is something that looks beautiful from every angle and its a building that belongs to a city like LA.

You have the club shop located on the west stand, which is a rather striking glass building but the main feature is the roof. If you approach from Figueroa Street, both the north east and south east corners are more open. This gives you an exceptional view of the futuristic but elegant silver curved roof. At night, this can look all the more impressive courtesy of the lights dotted along the front of the said roof.

The Interior
When you’re inside, the roof remains an impressive feature of the stadium. The back row seats have an open gap behind them meaning the roof isn’t fully connected with a support structure used instead to allow a better air and light flow. You do not lose atmosphere though with the Banc of California Stadium regarded as one of the best in the MLS for the game day buzz. A big part of this is the shaping of the roof, which helps to bounce the noise around the stands.

Then you have the seating itself. The main attraction is the standing section, which is named 3252 after the amount of spectators it can hold. This is the supporters section, which is located at the north end of the stadium. The west stand is a two-tier stand with a series of lounges dominating centrally; you have the Field Club closest to the dugouts, the Founders Club behind that and the Sundeck Suite finishes the stand off. Opposite, in the east stand, you have two-tiers dominated by ‘normal’ seating but with a section on halfway the exception as you have the Figueroa Club and Midfield Box. Finally, you have the south stand, which is a single tier stand but sloped upwards quite dramatically to put fans on top of the goal. For the majority of fans, your attention will be drawn to the enormous screen located at this end.

If you’ve never visited the Banc of California Stadium before you might be thinking ‘LA, there will be loads of choice for food and drink’. You’re not wrong as such but, actually, your dining options are hardly suffocating. Your nearest trio of options, for example, are Subway, McDonalds and a pop up takeaway named El Chupacabras – although the latter is highly regarded. There is more to offer in the area though but it’s a case of knowing where to look.

On West 39th Street, which is a 10 minute stroll away, you have Figueroa’s, who specialise in Philly Cheese Steaks. Also in this vague direction you’ll find a Mexican gig named Chichen Itsa, on 37th Street, whilst the well regarded seafood restaurant Holbox is also located here. Both are a 15 to 20 minute walk. If that’s too far then consider heading west on Martin Luther King Boulevard and you’ll find pizzerias, burgers and Mexican cuisine at the distance of about 0.5 miles.

Of course, you have options to explore inside the stadium too. There is loads to choose from here including topped pittas, Korean inspired menus, BBQ joints, chicken specials and so much more. You’ve even got the ability to delve into one of a few lounge bars where local ingredients come to the fore. Finally, where booze is concerned, LA FC have you well covered on this front too; although, as before, most of your best options are located in the stadium so don’t expect your drinks to come at rock bottom prices.

What Is Banc of California Stadium Like for Away Fans?

The main thing to note for visiting fans is where you can expect to plant you butt to take in the match. Well, generally, opposition supporters are sat in the south east corner. This puts you opposite the more rowdy LA FC fans and the wrong side of the field to see your teams subs warming up with dugouts located on the west of the pitch. You will, however, get a decent view of the pitch – as all seats offer – whilst there is a big screen located in the north west corner for replays etc. You’ll need this because the main screen may well be tough to see depending on your exact location.

How Do You Get to Banc of California Stadium?

Finding the stadium is pretty easy with its location in Exposition Park; you’ve got two options of how you get to the area though. Firstly, you can jump aboard the train where you have three main stations to stop at. The furthest away is Jefferson, which means you’ll have a 20 minute walk straight down Figueroa Street and thus you’ll get the whole experience of approaching the open corner in the north east. Equally, you could opt for either one of Vermont station orUSC and save yourself five minutes of walking with both stations situated to the north side along Expo Boulevard.

If you’re someone that wants to drive to the game then you have loads of parking options. Lot 2 off South Vermont Avenue is a large parking space and just a 10 minute walk to the west stand whilst the south of the stadium offers parking galore with several official car parks designated for your needs. The main choices are accessible of Martin Luther King Boulevard.

If you plan on resting your head close to the stadium the night before the game, you’ll have to decide just how close to the ground you want to be based. There are a couple of options within 0.5 miles but the sit at either end of the budgeting range. Firstly, you have the closest and cheapest option in Park Motel. This 2-star joint will cost you around $100 for a night but is just a 10 minute walk. The other possibility is USC Hotel; it’s the other side of the stadium to Park Motel and is twice the distance to walk along with coming in at a much pricier $340. It is considerably nicer though so it’s a case of what boxes you want ticked.

Be the first to leave a review of Los Angeles FC!