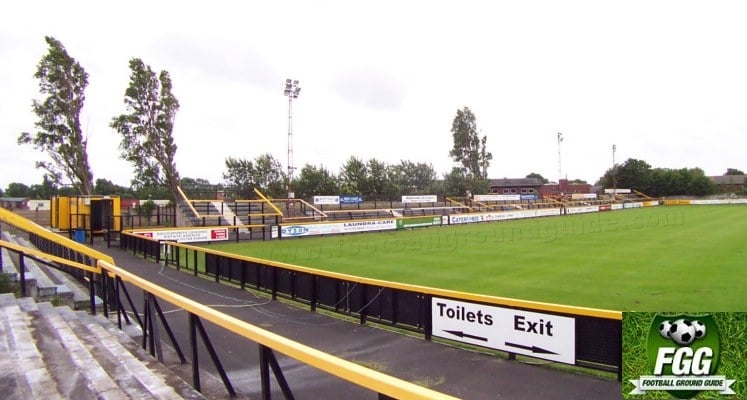 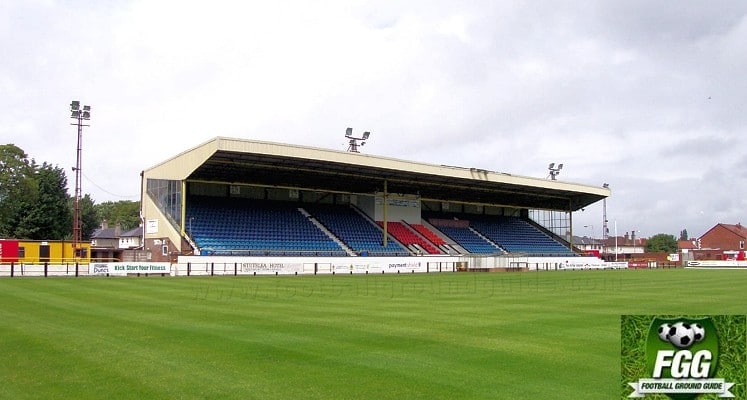 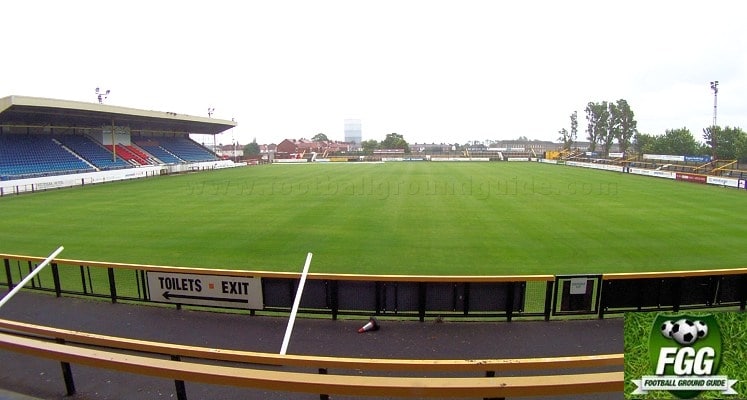 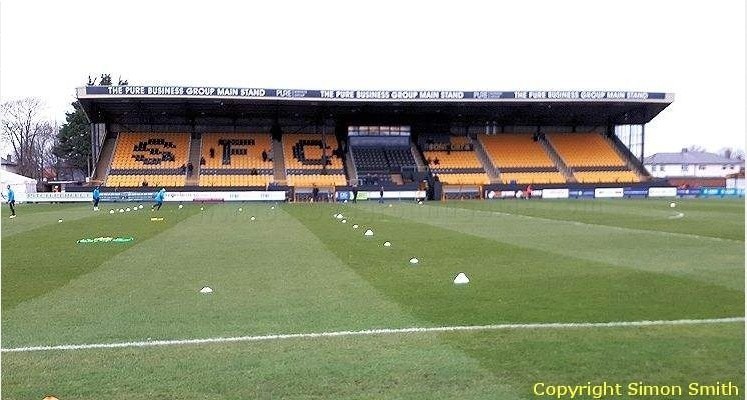 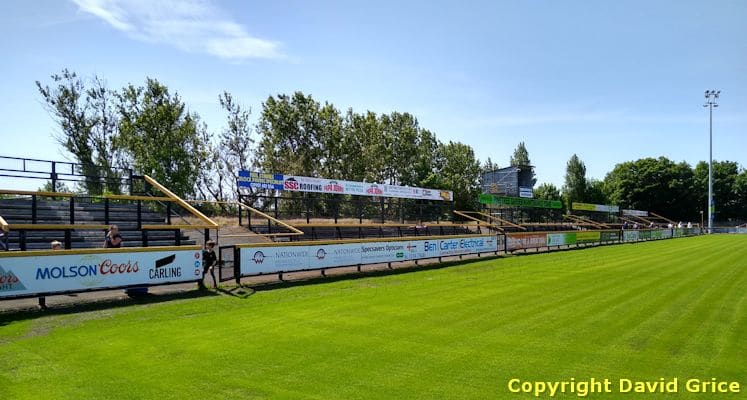 The Pure Stadium is a fairly open ground and is at long last seeing some investment. During 2018 the Grandstand on one side of the ground. was refurbished, including a new roof, replacement of the existing seating and other facilities such as Directors and Press Boxes. It has a capacity of 1,840 seats and now looks quite smart. It doesn't run the full length of the pitch and straddles the halfway line, with the spaces on either side, unused for spectators. It is not totally free of supporting pillars, with one large pillar, situated towards the middle. There are also windshields to either side. The Grandstand was first opened in 1968.

The rest of the stadium is comprised of terrace, with only the Jack Carr terrace (named after a former Director of the Club) at one end being covered. This terrace, which is also known as the Scarisbrick End, is the home end and can house just over 900 fans. The roof has no supporting pillars to hinder the view but only runs for around half the width of the playing area. Opposite is the Blowick End, a small open terrace which is allocated to away fans. On the remaining side of the ground is the Popular Side, another open terrace, which is unusual in the respect that it is comprised of five separate blocks. There is an electronic scoreboard situated in one corner of the ground in-between the Main Stand and The Jack Carr Stand. The ground is completed with a set of four modern floodlights, one in each corner.

The Club has plans to build a new 1,300 capacity all seated stand with corporate facilities on the Popular Side and a new covered terrace at the Blowick End. The video below shows a mock-up of how the new stand will look:

The above video was produced by Southport FC and made publicly available via YouTube.

Away fans are predominantly housed in the Blowick terrace at one end of the ground, where just under 1,200 supporters can be housed. This small terrace is set back from the pitch and is open to the elements, so hope it does not rain. A better bet maybe to head for one of the 300 seats made available to visiting supporters in the Grandstand, as this is covered and generally gives a better view. The refreshments are competitively priced; Cheeseburgers (£2.50), Cumberland Sausage (£2.50), Hot Dogs (£2) and a selection of pies (£2).

There is a bar at the ground which is situated behind the Grandstand, aptly called the Grandstand Bar. This shows Sky Sports matches and even serves its own real ale called 'Grand Stand Gold'. Otherwise there is the ‘Thatch & Thistle’ pub, which also serves food. This is located near to the bottom of Haig Avenue, at the junction of Butts Road and Meols Cop Road. As its name suggests the pub has a thatched roof as is part of the 'Two for one' chain. Also coming from the M58 on the Scrisbrick New Road is the Richmond pub, which is also in walking distance of the stadium.

If you have a bit more time on your hands, then just over a mile away is Southport town centre, where there are plenty of good pubs to be found. Worth mentioning are the Sir Henry Segrave, Wetherspoon outlet and the Scarisbrick hotel. Both of which are located in Lord Street and are listed in the CAMRA Good Beer Guide.

Leave the M6 at Junction 26 and take the M58 towards Southport. Leave the M58 at Junction 3 and take the A570 towards Ormskirk. Follow the A570 around Ormskirk Town Centre towards Southport. On entering Southport you will come to a large roundabout with Tesco’s & McDonalds outlets. Take the 3rd exit onto Scarisbrick New Road (A570). You should now be able to catch sight of the ground over on your right. Pass the Richmond pub on your left and then turn right into Haig Avenue. The ground is down on the right. There is no car park at the ground as such. There is though plenty of street parking available in the surrounding streets, however in some streets there are some parking restrictions so check for any warning signs.

The nearest railway station to the ground is Meols Cop which is about a mile away away from the ground. It is served by trains from Manchester Piccadilly. As you come out of the station turn left and proceed down Norwood Road. After about half a mile, turn right into Haig Avenue and the stadium is located down on the left.

Southport station is located a mile and a half away from the ground. It costs around £5 for a taxi. Rosalind Zeffertt informs me; 'The best way to get to Haig Avenue from the station is by the number 44 Arriva bus which runs every 20 minutes from Eastbank Street (at 02, 22 and 42 past the hour). Go left out of the station onto Chapel St and then Turn left into Eastbank Street and the bus stop is on that side of the road opposite the Bright House store. In the evenings, the 44a goes from the same stop but is only every half hour, at 17 and 47 past the hour'.

Adam Hodson a visiting Stockport County fan adds these walking directions; 'Head out of the station via the Chapel Street exit, turn left and walk through the pedestrianised shopping centre, passing shops such as WH Smiths & Marks & Spencers. Turn left at the end at the end of the pedestrianised shopping centre onto Eastbank Street. At the roundabout take the second exit onto Scarisbrick New Road, passing a Total garage on the left. Continue through one set of traffic lights and at the second set of traffic lights, turn left onto Haig Avenue and the ground is down on the right. It took me around 25-30 minutes to walk'.

Whilst Paul Aird informs me; 'For a quicker alternative walking route; 'Exit the station by the side entrance leading to the car park and turn right into London Street. At the top of London Street take the Victoria Footbridge over the railway line then turn left into Virginia Street, continue straight into Forest Road then right into Haig Avenue for the ground'.

Please note that cash is not accepted at the turnstiles, a ticket needs to purchased beforehand either online or at the club shop.

If you require hotel accommodation in Southport then first try a hotel booking service provided by Booking.com. They offer all types of accommodation to suit all tastes and pockets from; Budget Hotels, Traditional Bed & Breakfast establishments to Five Star Hotels and Serviced Apartments. Plus their booking system is straightforward and easy to use. Yes this site will earn a small commission if you book through them, but it will help towards the running costs of keeping this Guide going.

Special thanks to David Grice for providing the photos of the Haig Avenue Ground, Southport. 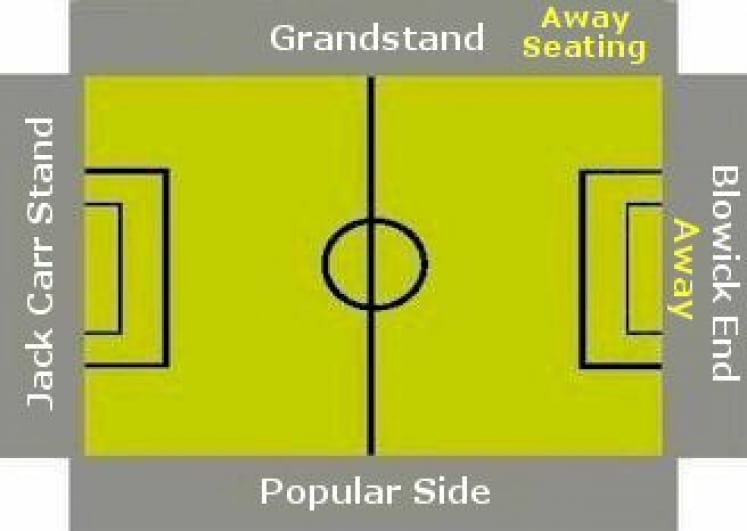