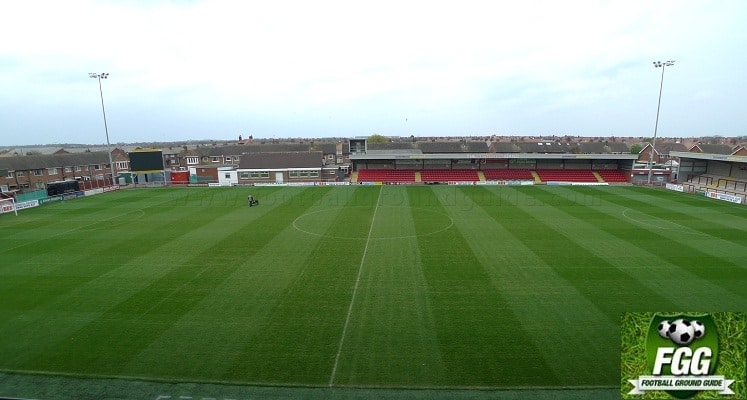 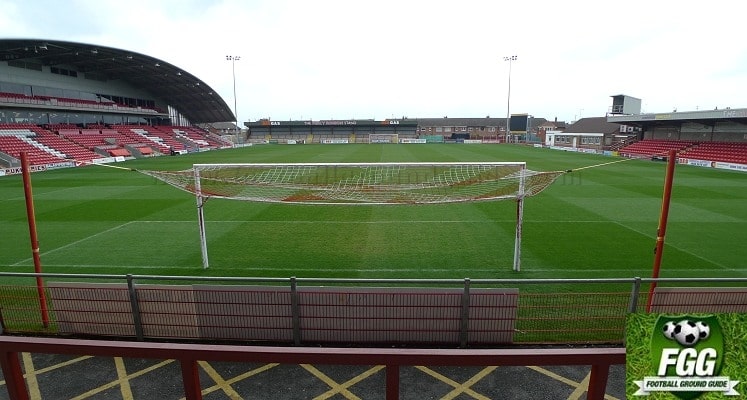 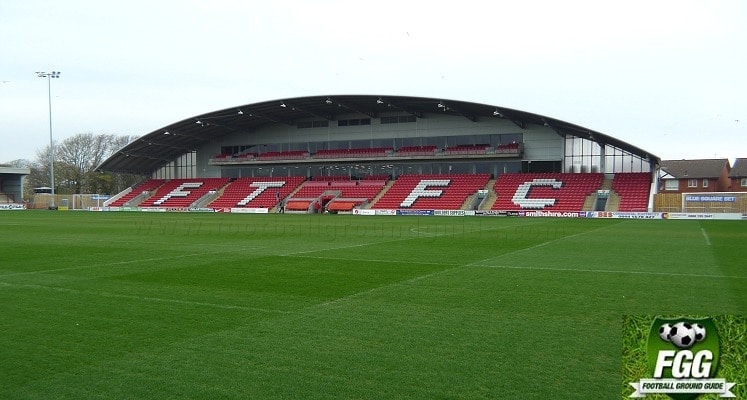 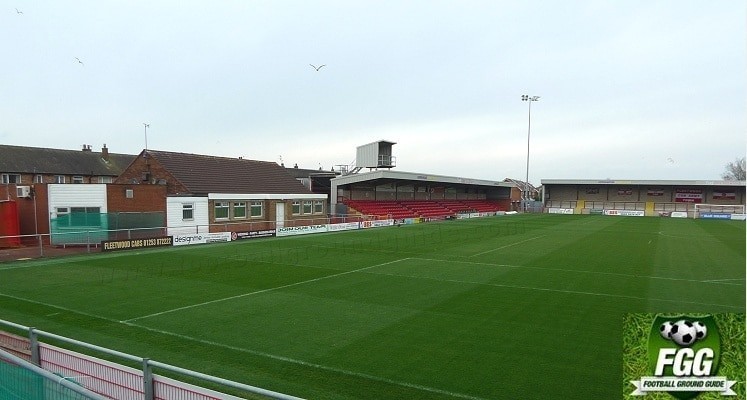 The stadium is modern having been completely rebuilt over the last five years, matching the teams’ meteoric rise up the leagues with five promotions in seven seasons. The latest addition to the ground is the very impressive looking Parkside Stand which was first opened to spectators in March 2011. This 2,000 capacity all seated stand was built at a cost of around £4m. It has a single tier of seating, whilst above are offices and a top row of executive boxes and hospitality area, all of which have a small tier of seating outside. These are covered by a semi-circular roof, with large glassed areas to either side which allow light to get to the pitch. At the front of this stand are the team dugouts.

Opposite is the Highbury Stand, which is a small all-seated covered stand, which was opened in 2008. It is only six rows high, has a capacity of 550 and runs for only half the length of the pitch, meaning that there is a large open area next to it, although this area does feature some buildings. On the roof of the Highbury Stand is a small television gantry. For the ‘eagle-eyed’ then directly behind it you can see a small roof which is the roof of the old Main Stand which is still in existence having had the new stand built in front of it. It just shows how much the stadium has come on when you consider that at one time there was this stand and not much else at the ground.

Both ends are covered terraces, which are similar in size in terms of height. The Percy Ronson Terrace which is given to away supporters runs for around 2/3rds of the width of the pitch. Whilst the home end, the Memorial Stand (named in memory of the service and trawlermen who have previously lost their lives from the port of Fleetwood) is larger extending the full width of the pitch and housing just under 1,500 supporters. In one corner of the stadium beside the Percy Ronson Terrace (on the Highbury Stand side) is a large video screen. The stadium is completed with a set of modern floodlights.

Away fans are mostly housed in the Percy Ronson terrace at one end of the stadium, where 831 fans can be accommodated. This terrace which was opened in 2007, is covered, free from supporting pillars and affords a good view of the playing action. The Club have recently improved the facilities in this area with a new snack bar and toilet block. The terrace capacity also includes an open flat standing area on the Highbury Stand side. The official capacities are 621 for the Percy Ronson Terrace and 210 for the Highbury side standing area. There is an away fans ticket office and programme booth situated outside the visiting supporters entrance.

Visiting supporters are also allocated 300 seats in the Parkside Stand and this can be increased if required. The facilities in this stand are far better than the terrace with alcoholic drinks available to purchase and there are large screens on the concourse showing Sky Sports. For teams with a smaller following then only the Parkside seats will be made available and not the Percy Ronson Terrace. Food on offer inside the Highbury Stadium includes; Cheeseburgers (£3), Hot Dogs (£3) and a range of Hollands Pies (£3). Also, listen out for the odd sea shanty music which is played when Fleetwood score.

There is Jim’s Sports Bar at the ground, which normally admits away fans. The facilities in this bar are excellent, but get there early as it is bound to be very popular on matchdays. It is located at the back of the Memorial Stand and can be accessed from the park pathway that runs along that side of the ground. It is open from 12 noon on Saturdays and 5pm on matchday evenings and shows BT and Sky Sports on a large number of televisions. The Highbury Club which is located adjacent to the away turnstiles does not allow in visiting supporters.

Martin Crimp a visiting Southport fan informs me; ‘We were directed to the Queens Hotel, on Poulton Road, about a 15 minute walk away. It has Sky Sports on multi screens along with a decent pint of Thwaites. Go up Highbury Avenue then left at the St Nicholas church into Poulton Road. The Queens is about 300 yards along this road on the left.’

Otherwise, it is probably best to take the 10-15 minute stroll into Fleetwood itself (on leaving the stadium entrance go up to the main road and turn left) where there are plenty of pubs to be found. My choice would be the Wetherspoon outlet the Thomas Drummond on London Street (off Lord Street). About the same distance away is the Strawberry Gardens pub on Poulton Road. This is owned by the local Fuzzy Duck brewery and features beers from that brewery as well as guest ales. It also provides food the catering for which is provided by Syd Little (of Little & Large fame) and his wife. On the seafront itself is the Mount Hotel, that benefits from showing live televised sports. These three pubs; the Thomas Drummond, the Mount Hotel and the Strawberry Gardens are all listed in the CAMRA Good Beer Guide.

Alcohol is also available inside the stadium but only to away fans who have seating tickets in the Parkside Stand.

Leave the M6 at Junction 32 and take the M55 towards Blackpool. Then leave the M55 at Junction 3 and take the A585 towards Fleetwood. On the outskirts of Fleetwood, you will come to a roundabout with Blackpool and Fylde college on your left. Continue straight on towards Fleetwood but after the roundabout take the first left into Copse Road. After about a mile and as you pass Fleetwood Fire station on your left then branch left and turn left onto Radcliffe Road (going back on yourself but in parallel with Copse Road). Then take the next right into Stanley Road and the stadium is at the bottom of this road on your left. There is no parking for away supporters at the stadium itself but there is plenty of street parking available in the area. There is also the option of renting a private driveway near in the local area via YourParkingSpace.co.uk.

There is no railway station in Fleetwood itself. The closest is at Poulton-le-Fylde, which is just under seven miles away. However it is more likely that fans will head to Blackpool North Station which although is a little further away from Fleetwood, it has better public transport links. Still, a taxi from Blackpool North Station to Fleetwood will cost you the best part of £20, which may okay if there is a group of you. For smaller groups it may be better to catch a bus to Fleetwood, Service numbers 1 and 14, run from Blackpool, or head to the seafront to take a tram.

Jean Cox of Blackpool Transport informs me; ‘When you come out of Blackpool North Station walk up to the main road which is Talbot Road and then walk down past Wilkinson’s store, cross the road at the Station Pub and then walk down to the bus stop outside Home Bargains. The line 14 is on the hour and then every 10 minutes to Fleetwood. Or you can walk down to the Promenade. At the North Pier, you will see the tram stop, at the end of the tram shelter there is a bus stop for Line 1 which also goes to Fleetwood. Line 1 runs 12 minutes past the hour and then every 20 minutes. You can buy an unlimited day travel pass for £5.50 per adult (or there is a group ticket of 3 adults available for £13)’.

If you have time on your hands and you fancy a trip along the seafront, then you could walk to the seafront in Blackpool and catch one of the new of the trams that run along the coast. Services to Fleetwood run every 20 minutes and the journey takes around 40 minutes. The nearest stop to the ground is Stanley Road, which is around 200 yards from the stadium.

* Home fans can get further discounts on these ticket prices (up to £5) by becoming a Club Member.

*** Under 16’s can be admitted free to the Highbury Stand if they become a Club Member and are accompanied by a paying adult.

If you require hotel accommodation in Blackpool then first try a hotel booking service provided by Booking.com. They offer all types of accommodation to suit all tastes and pockets from; Budget Hotels, Traditional Bed & Breakfast establishments to Five Star Hotels and Serviced Apartments. Plus their booking system is straightforward and easy to use. Yes this site will earn a small commission if you book through them, but it will help towards the running costs of keeping this Guide going.

Map Showing The Location Of the Highbury Stadium, Railway Station And Listed Pubs

Unofficial Web Sites:  None at present 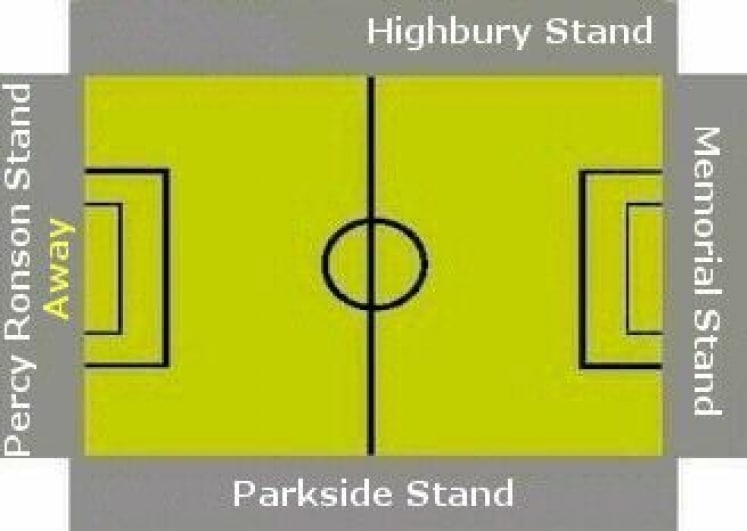