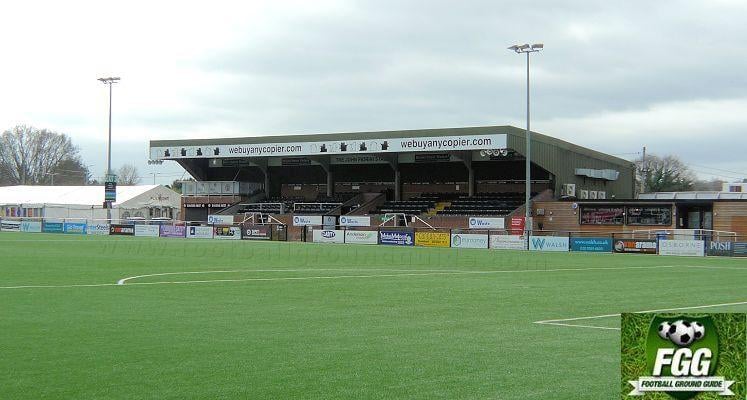 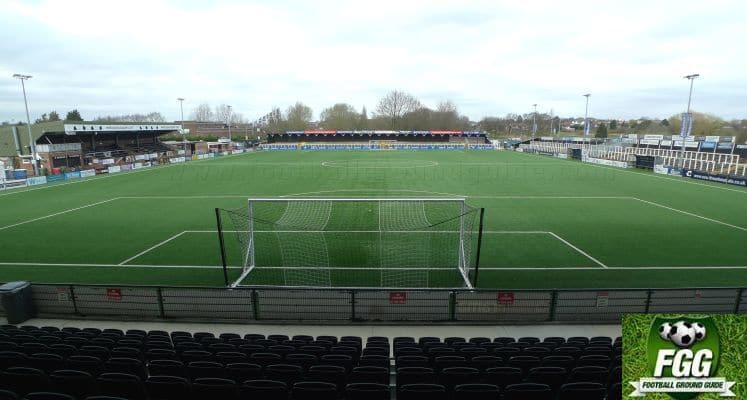 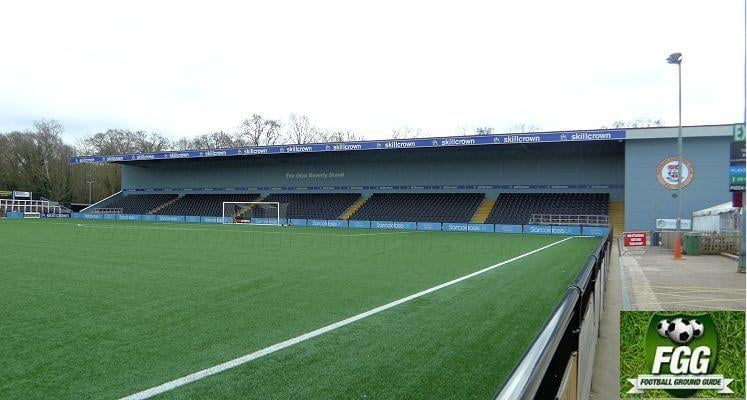 Hayes Lane has seen some recent development with the building of a new smart-looking stand and offices at the Norman Park End. Opened in 2019 this tall grey structure, has a single tier of seating spread over five blocks and has a capacity of 1,450. It has a high back retaining wall due to the new club offices located behind and some roof cover for the seating area. It has been named the Glyn Beverly Stand, in honour of a former Club President.

On the west side is the modern-looking John Fiorini (Main) Stand. This covered all seated stand doesn’t have any supporting pillars and sits astride the halfway line. Opened in 1993, it has a capacity of 285 seats (which are believed to have come from Wimbledon’s old Plough Lane Ground). Opposite this is a reasonable sized open terrace that has two rows of some classic looking crush barriers from end to end, with a newish black wooden fence at the back. It is known as the Cricket Club Side, due to the cricket pitch that lies beyond it. I hope that the batsmen can’t hit a ‘six’ that far! The team dugouts are situated on that side, but the dressing rooms are behind the Main Stand. The North Terrace at one end has an interesting look as it is partly covered to the rear. The roof though does have a disproportionate amount of supporting pillars running across the front of it. During 2017 the Club installed an artificial 3G playing surface at Hayes Lane.

The ground is shared with Cray Wanderers, who, having been formed in 1860, are the oldest association football club in London, and the joint second oldest in the world! Crystal Palace Ladies also play their home games at Hayes Lane.

In 2018 Hayes Lane was renamed the Westminster Waste Stadium in a corporate sponsorship deal.

For most matches at Hayes Lane fans are not segregated. However for bigger games where segregation is put in place then away fans are housed on one side of the Cricket Club Side Terrace. Visiting supporters on these occasions use turnstiles located on the far side of the North Terrace (on the other side of the ground to the main entrance). The away section stretches from the corner flag to just past the halfway line. As the home team dugout is located in front of the visiting fans then this can lead to a number of ‘suggestions’ being aimed in their direction. Although this Side Terrace is of a reasonable height being 12 steps high, it does have a row of floodlight pylons running across the front of it, which could hinder your view. The terrace is also open to the elements so hope it doesn’t rain. Most fans enjoy their visits to Bromley as it is a proper old-fashioned ground with plenty of character. There is quite a spacious and comfortable Social Club at the stadium, called Ravens Bar. It boasts a number of screens showing televised BT and Sky Sport and serves real ale, normally provided by a microbrewery. The Bar also serves fresh Pizzas and Cornish Pasties are available. Visiting fans are welcome to use Ravens Bar unless segregation is in force for that particular match. On those occasions away fans have a temporary bar facility set-up inside the ground near to the turnstiles.

Around a 15 minute walk away on Masons Hill is a pub called the Bricklayers Arms. This traditional pub normally has a good mix of home and way supporters. It offers real ales, food and also has televised live sports. Next door to the Bricklayer is a small micropub called the Bitter End, which serves real ale straight from the barrel.

Leave the M25 at Junction 4 and take the A21 towards Bromley and London. After five miles turn left at the traffic lights onto the A232 towards Croydon/Sutton. At the 2nd set of traffic lights turn right into Baston Road (B265). Continue straight on this road through Hayes. The road becomes Hayes Lane and after the mini roundabout, the entrance to the ground is down on the right. There is a small car park at the ground which costs £2, otherwise street parking.

The Club have commenced with the redevelopment of the Norman Park (South) End of Hayes Lane. This involves the construction of a large multi-purpose office type building, which will also have 1,450 seats installed out front. It is hoped that it will be ready for the start of the 2019/20 season. An artist’s impression of the new stand and building can be viewed on the Bromley FC website.

Thanks to Paul Willott for the photo below showing the progress works. It was taken in January 2019: Bromley South Railway Station is located around a mile away from the ground. It is served by trains from London Victoria. It is around a 15-20 minute walk.

On exiting the main entrance, turn left and walk down the High Street. On reaching a set of traffic lights, turn right into Westmoreland Road. Just after passing a church on the left, turn left into Hayes Road. Follow Hayes Road until your each its end (about half a mile) where you will reach a junction that has a mini roundabout. Turn right here into Hayes Lane. The entrance to the ground is a little further up Hayes Lane on the left.

Paul Willott informs me; ‘You can get the number 119 bus (towards Croydon) from Bromley South Station that goes right past the ground. It runs every 10 minutes or so’.

In Advance Of Matchday:

Bromley FC Fixtures (takes you to the BBC Sports Website).

Book Your Bromley or London Hotel and help support this website!

If you require hotel accommodation in Bromley or Central London then first try a hotel booking service provided by Booking.com. They offer all types of accommodation to suit all tastes and pockets from; Budget Hotels, Traditional Bed & Breakfast establishments to Five Star Hotels and Serviced Apartments. Plus their booking system is straightforward and easy to use. Yes this site will earn a small commission if you book through them, but it will help towards the running costs of keeping this Guide going.

Special thanks to Myles Munsey for providing the photo of the Norman Park End and to Phil Bennett for the photos of the John Fiorini Main Stand and Cricket Club Side Terrace.