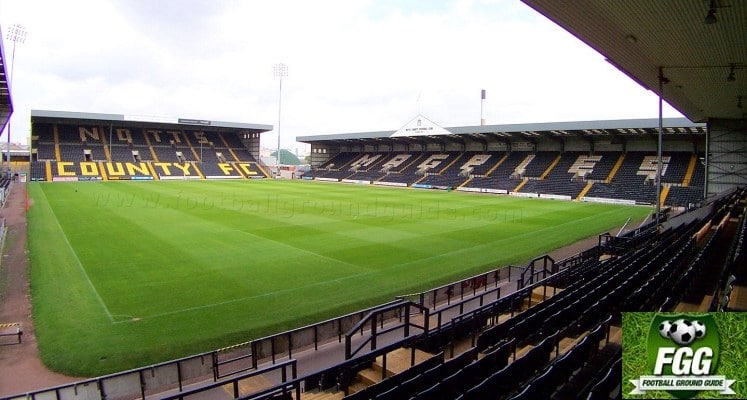 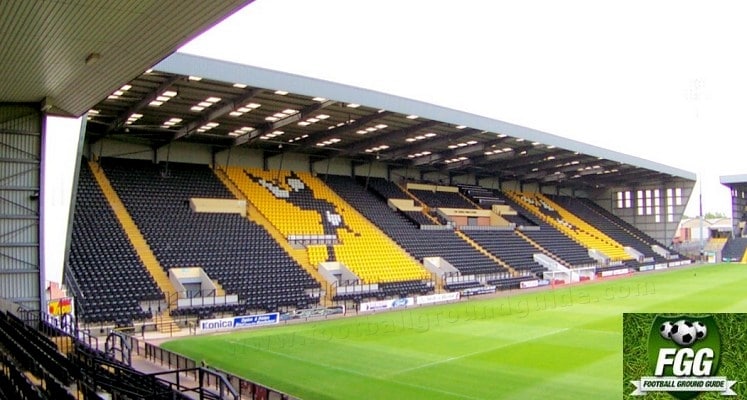 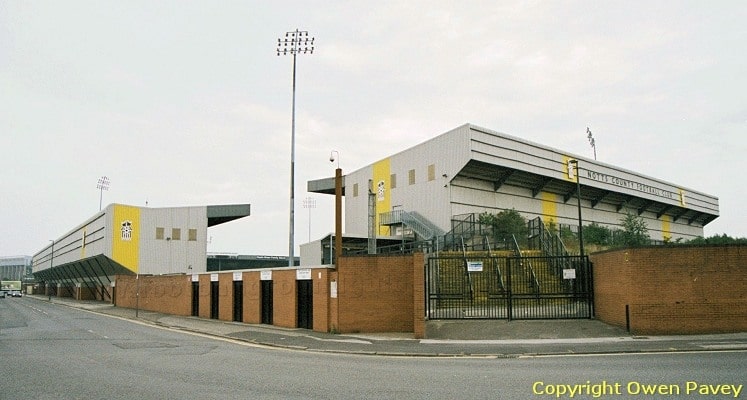 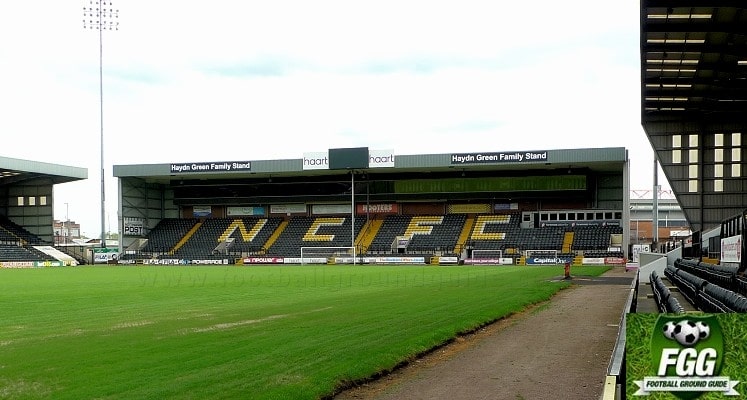 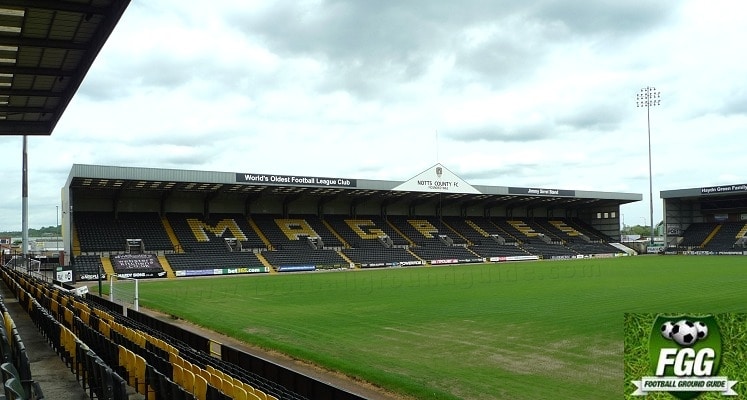 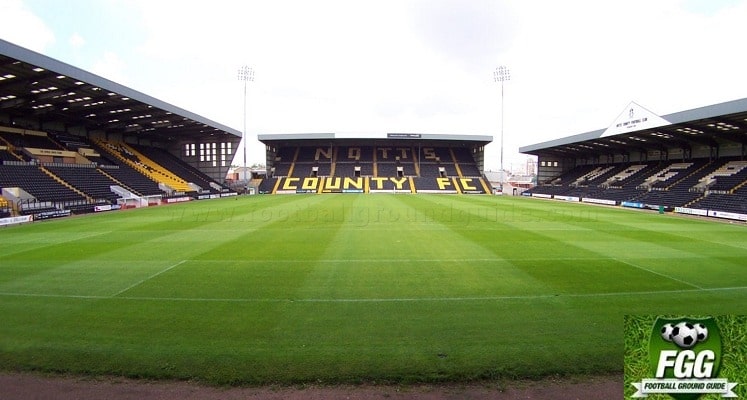 During the early 1990's the ground was completely rebuilt, creating an attractive all-seater stadium. Although the ground comprises four separate stands, it is quite smart looking. Both sides are single tiered stands, the larger of which is the Derek Pavis Stand. This is the Main Stand containing the Directors Area and having the players tunnels and team dugouts at its front. Opposite is the Jimmy Sirrel Stand which has a gable on its roof reminiscent of those old grounds, where they were once a common sight. At one end is the large Kop Stand, which can house up to 5,400 supporters. Again this is a newish stand with excellent facilities. The other end is the smaller, covered Family Stand. This stand has one sizeable solitary supporting pillar, which may affect your view as it is situated right at the front of the stand in the middle. This stand also has a small electric scoreboard on its roof. The stadium is completed with a set of four modern floodlight pylons. Outside the stadium, there is a statue of Notts County legends Jimmy Sirrel and Jack Wheeler (see the section below to see a photo of the statue).

On my last visit, I was very impressed with the standard of the ground. The views were generally good and the concourse spacious. I was quite impressed also to see a proper queueing system in place for refreshments. I wish more clubs would do this as I personally hate the scrum around kiosks that is common place at most other Clubs. The Club offers a range of Pukka Pies costing £3 each, as well as Cheeseburgers (£3.70), Burgers (£3.50), Veggie Burgers (£3.50) and Hot Dogs (£3.40). The only disappointments were that the substantial supporters club didn’t allow in away supporters and that the ground generally lacked atmosphere. The Club also allow away fans who wish to, to have a cigarette at half time in a designated smoking area. A visit to Meadow Lane is usually a hassle-free and enjoyable day out.

Andy McLaren a visiting Hartlepool United fan adds; ‘The stewards at the back of the away section let us stand and even joined in with some friendly banter. There was a reasonable number but they kept a low profile and let the fans enjoy themselves. Overall they were a credit to the club and made the day enjoyable!’

The Supporters Club called the 'Broken Wheelbarrow' (named after a fans song) at the ground, tends to be for home fans only. A couple of minutes walk from the ground on Meadow Lane itself is the Trent Navigation Inn. Normally on matchdays, it has a good mixture of home and away supporters, although, for some high profile games, it reverts to being a home fans only pub. At the back of the pub is its own Navigation Brewery.

After that then probably the nearest pub would be the Southbank Bar as Steve from the Pie Fanzine website informs me; 'Just on the other side of Trent Bridge (although mercifully facing away from that rusting monstrosity with a red tree painted on the side!) is the Southbank Bar. It serves excellent food and has sport on the numerous televisions; three real ales are offered here including one from the tiny local Mallards brewery'. A little further on up from this pub near to the cricket ground is the 'Trent Bridge Inn' which is a Wetherspoons pub.'

If arriving by train then just across from the front of the station down Queensbridge Road is the "Vat and Fiddle" situated next door to the Castle Rock micro-brewery. It offers ten real ales, food and children are welcome'. It is also listed in the CAMRA Good Beer Guide.

Whilst Tim Cooke a travelling Millwall fan has a different angle (so to speak); 'definitely one for the lads!  Hooters (on the main road A6011, on the outskirts of the city centre, you can't miss it!) has very nice waitresses wearing just enough to cover things up, serves lovely beer, and great food'. It is quite popular on matchdays so it is advisable to pre-book a table.

If you have a bit of time on your hands, then I would suggest that you check out the ‘Olde Trip To Jerusalem’. This historic pub dates back to the 12th century and some of the rooms are ‘cave like’ having been carved out of the rock that Nottingham Castle is situated upon. Add real ale, food and a small beer garden, then it is certainly worth a visit. It is about a five minute walk away from the train station. As you come out of the station turn right. At the top of the road turn left and then take the second right into Castle Road. Just tucked away on the left is the pub.

There is also the Waterfront complex of bars (including a Wetherspoons outlet) which is a short walk from the train station. As you come out of the station turn right and cross over to the other side of the road (As you cross the bridge going over the canal you can see the complex). At the top of the road turn left and the Waterfront complex is just down on the left, located behind the buildings on the main road. Another pub of note in this canalside area is the Canalhouse. You don't get many pubs that have a canal running through it! Alcohol is also available within the ground in the form of Carlsberg (£3.80) and Tetley’s (£3.80).

Leave the M1 at Junction 26 and take the A610 towards Nottingham and then follow the signs for Melton Mowbray. Turn left before the River Trent in to Meadow Lane. Parking is available at the Cattle Market (opposite the away end) which costs £3.50 a car or at Nottingham City Council's Eastcroft depot (NG2 3AH) at £4 a car. The depot is a five minute walk from Meadow Lane, located just off London Road (A60), opposite Hooters. The entrance is signposted with banners and is manned by security guards throughout the match. Streets around the ground have a number of on-street pay and display displays, but these need to be paid via telephone or via the RingGo App. Check lamposts for information.  Free street parking is available further away. Martin Breslin informs me; 'There is a relatively new, secure multi-storey car park at Nottingham Railway Station which offers match day parking at £5 all day on Saturdays and £3.50 evenings (after 6pm). You enter the car park via Queens Road'. There is also the option of renting a private driveway near in the local area via YourParkingSpace.co.uk.

The Meadow Lane ground is a 10-15 minute walk away from Nottingham Railway Station. As you come out of the main station entrance, Turn left from the station across the car park and then turn right at the traffic lights. The ground is about a 1/4 of a mile down the dual carriageway on the left.


* These ticket prices are for tickets purchased in advance on matchday. Tickets bought on the day of the match cost £2 more (except Under 12's which remain at £1)

A total of 100 spaces available at pitch level, in front of the Sirrel, Pavis and family stands.

On Meadow Lane itself near to the ground is a statue of two Notts County Legends, Jimmy Sirrel and Jack Wheeler. Costing over £100,000 the money for which was raised by the Notts County fans themselves, it was unveiled in May 2016. At a glance from a passing car, you could be forgiven for thinking that you had just seen two men sitting on a bench. I wonder what they would be talking about? 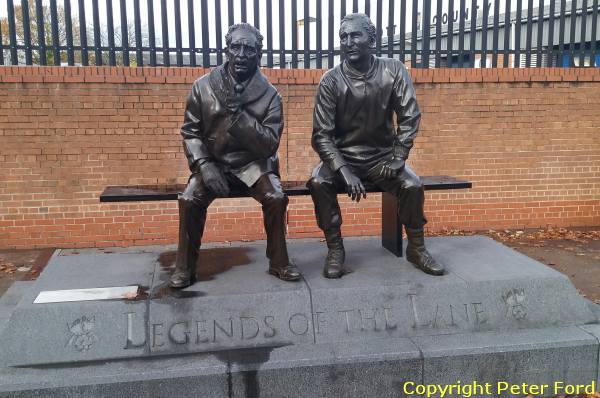 The plaque located on the side of the concrete base reads;

Jimmy Sirrel (1922-2008).
The most successful manager in Notts County's history. Club record with three promotions from Division Four to Division One of the Football League (1971, 1973 and 1981). "He did fantastically well" Sir Alex Ferguson

Nottingham Hotels - Find and Book Yours And Help Support This Website

If you require hotel accommodation in Nottingham then first try a hotel booking service provided by Booking.com. They offer all types of accommodation to suit all tastes and pockets from; Budget Hotels, Traditional Bed & Breakfast establishments to Five Star Hotels and Serviced Apartments. Plus their booking system is straightforward and easy to use. Yes this site will earn a small commission if you book through them, but it will help towards the running costs of keeping this Guide going.

Special thanks to Peter Ford for providing the photo of the Jimmy Sirrel and Jack Wheeler statues in nearby Meadow Lane. 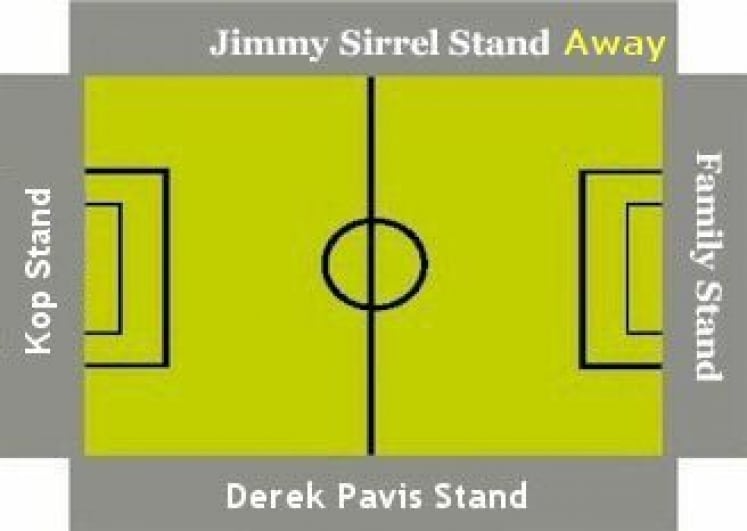