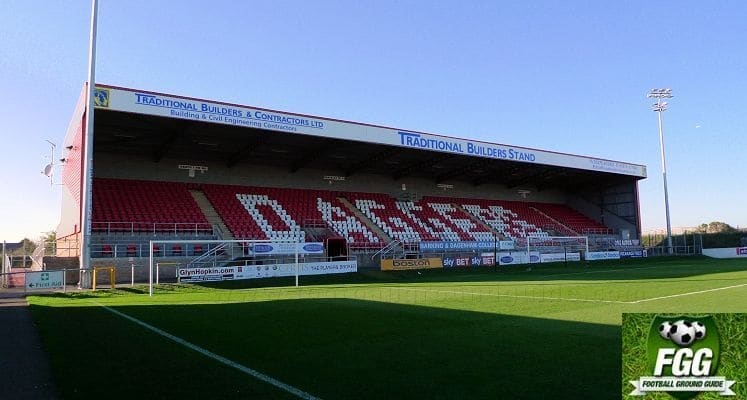 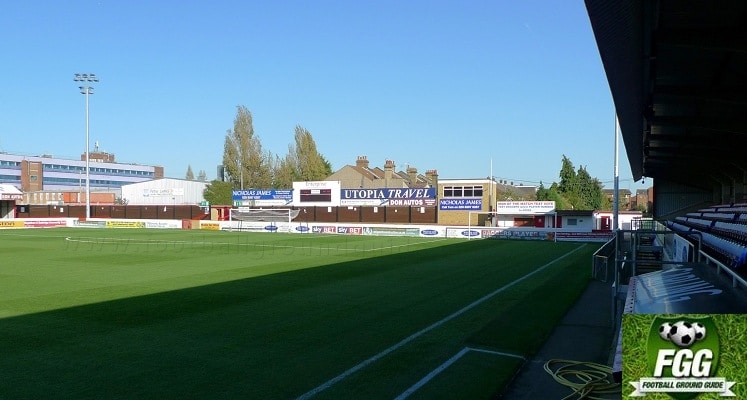 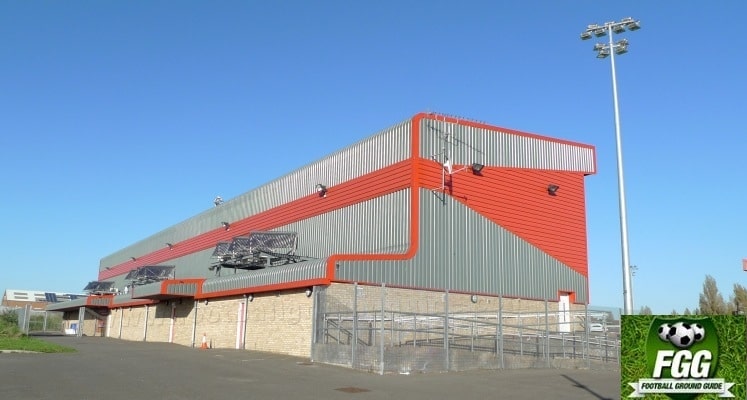 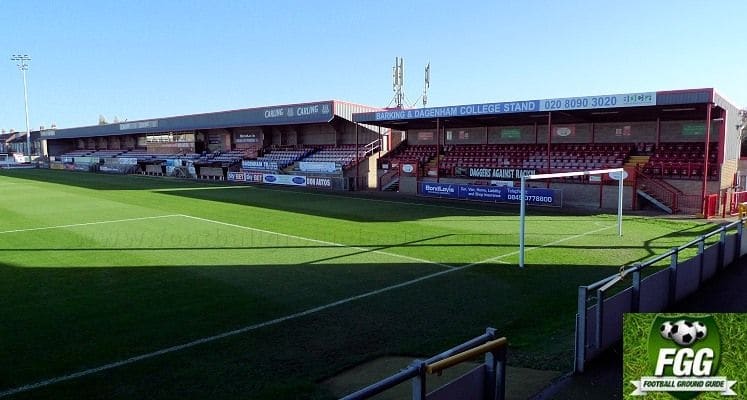 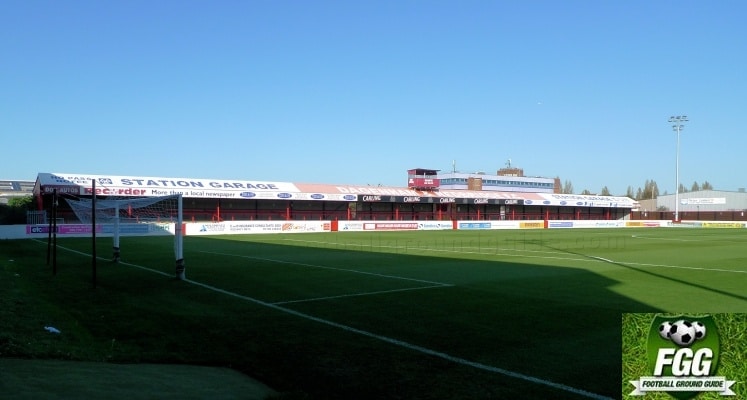 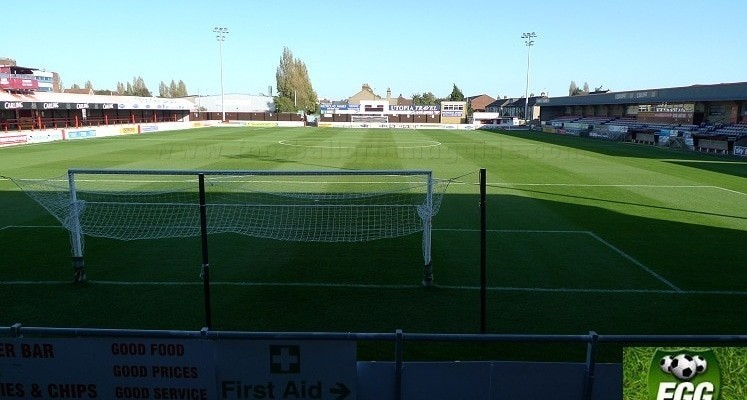 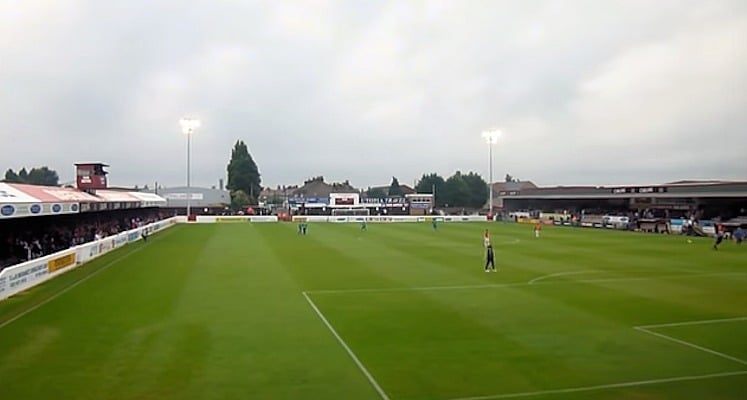 On one side is the relatively modern Main Stand, which was opened in 2001. Sponsored by Carling, this 800 capacity stand, is covered and all seated, with the team dugouts situated at the front of it. The stand comprises six rows of seating and has a small executive area at the back of it. The stand, which is free of supporting pillars, is elevated above pitch level which means that supporters have to climb small sets of steps at the front of it, to gain access. The stand though only runs for three-quarters of the length of the pitch and at one end towards the A13 Steel Stand, another separate stand exists. This stand which is called the Barking College Family Stand is a small covered, seated stand. It is smaller in height than the Main Stand and contains around 200 seats, with some supporting pillars running along the front of it. Again it is raised above pitch level and is accessed via a small staircase. At one end is West Stand (aka Pondfield End), which is a sizeable 1,200 seated affair. Opened in the 2009/10 season, it is covered, raised above pitch level and has windshields to either side. Although only eleven rows high, it is free from supporting pillars and is quite steep, meaning that fans are kept close to the playing action.

The rest of the ground is terracing, with a small open terrace behind one goal and a covered terrace along one side. The home end, the Bury Road End (aka the Clock End), has a small basic electric scoreboard situated above it. This area also contains the club shop and Police control box. The North Terrace, which runs along one side of the pitch, is known affectionately by the Dagenham fans as 'The Sieve' as apparently at one time it was famed for its leaking roof. This old fashioned looking terrace is partly covered to the rear and has a number of supporting pillars. It also has a television gantry perched upon its roof. Unusually the teams emerge from not from the Main Stand, but from a tunnel located in the new Marcus James Stand at one end of the ground. There is a video screen mounted in one corner in-between the Carling Stand and Bury Road End. The stadium is completed with a set of four modern looking floodlights.

The ground for sponsorship purposes is now officially called the 'Chigwell Construction Stadium', but it is still known to many fans as Victoria Road.

The Clubs new American owners are planning to make some improvements to the ground. This may include the construction of a new covered terrace at the Bury Road End of the ground.

Away fans are housed in the modern West Stand at one end of the stadium. Up to 1,200 fans can be accommodated in this area. As you would expect from a new stand the views of the playing action and facilities are both good. I experienced no problems, apart from outside the ground, it was not obvious (unless I missed the signs) showing where the entrance to the away section was. It is in fact at the other end of the ground to the main entrance. So as you go through the main entrance, walk straight on through the car park, past the supporters club to the right, and then walk along the back of the Main Stand. The entrance is down on the right at the corner of the ground. Away coaches are brought in at the back of the away section but on the other side of a park, which can make for an interesting walk especially if it is a night match.

The stand itself is easily the best stand at the stadium, so it is intriguing that it is given over to away supporters. It is raised above pitch level, meaning that you have to climb a small set of steps to enter it. One drawback is that the team's tunnel is located in this stand and awning is pulled out to the playing area before kick off. This means that at this time fans can't easily access the other side of the stand along the front of it, as they are effectively 'cut off' until the awning is withdrawn again. On the plus side away fans are treated to their own indoor bar area. Food inside includes; 1/2lb Cheeseburgers (£4.10), 1/2lb Burgers (£3.80), 1/4lb Cheeseburgers (£3.10), 1/4lb Burgers (£2.80), Bacon Rolls (£3), a range of Pies; All Steak, Chicken & Mushroom, Beef & Onion, Steak & Kidney (all £2.80), Homemade Shepherds Pie (£2.80), Jumbo Cheese Hot Dogs (£3.10), Jumbo Hot Dogs (£2.80) and Chips (£2).

On my last visit, I found Dagenham to be fairly friendly and the stewards generally relaxed. There wasn't many away fans in attendance, so the atmosphere with so few was fairly flat and I noticed that a fair number of balls were kicked out of the stadium during the game, as the stands are so small. Near the club house bar is a small programme shop selling a range of new and old football programmes.

There is a fair sized Social Club at the ground, which apart from a few high profile games, welcomes away supporters and costs 50p to enter. It is fairly basic, but comfortable and shows SKY Sports television. The beer is reasonably priced with hand pulled Youngs Bitter available, as well as real ale in bottles from the Three Daggers Brewery. Inside the ground, alcohol is available to away supporters in the A13 Steel Stand.

If it is a pub that you prefer, then near Dagenham East Underground Station is the Pipe Major. This Marston's pub was opened in 2015 and is proving popular with away fans due to its proximity to the station. The pub serves real ale and also offers food. Going further along Rainham Road, going past Golds Gym is the Eastbrook.

Simon Crawford adds; 'If you have time, try getting off the tube at Barking (four stops before Dagenham East). The station is right in the middle of the busy High Street and there are vast amounts of takeaways and cafes. Walk out of the station and to the left is a Wetherspoons called The Barking Dog and next door to it is the Spotted Dog, a real ale establishment, normally serving ales by the Brentwood Brewing Company'. George Cook informs me; 'If you get off at the next tube station along from Dagenham East which is Dagenham Heathway then diagonally opposite, is a Wetherspoons pub called The Lord Denman.' Jeff Beastall a visiting Mansfield Town fan adds; 'The Lord Denham is about a 15 minute walk away from where the where the away coaches drop you off at the back of the away end on Wantz Road.  Walk along Wantz Road, keeping Poundfield Park on your left. At the end of Wantz Road turn right onto Reede Road. After about a 10 minute walk, at the end of Reede Road turn left into Heathway. There are a few shops around this junction and The Lord Denham pub is about 20 yards up on your left'.

Get Tickets For Real Madrid v Barcelona In December 2017 From Nickes.com

Book your seat now at the biggest fixture in world club football – The El Clásico! Tickets for El Clásico are like gold dust but Nickes.Com can create your perfect dream trip to the next instalment, taking place this December in Madrid’s magnificent Santiago Bernabéu. We will arrange a quality city centre Madrid hotel for you as well as coveted match tickets to the big game. Prices will only rise as matchday looms closer so don’t delay! Click here for details and booking right now!

Whether you are a small group planning a dream sports break, or you are seeking wonderful hospitality for your company, Nickes.Com has 20 years of experience in providing unforgettable sporting experiences. We offer a whole host of ticket and hotel packages for La Liga, all major European football leagues as well as the UEFA Champions League. Book your next dream trip with Nickes.Com!

Leave the M25 at Junction 27 and take the M11 towards London. At the end of the M11 continue onto the A406 towards Docklands (A13) and London City Airport. At the intersection with the A13, turn onto this road in the direction of the Dartford Crossing. At the junction with the A1306, leave the A13 and join the A1306 towards Dagenham. At the third set of traffic lights turn left just before the McDonalds into Ballards Road. At the end of this road you will come to a large roundabout, (known as the Bull roundabout, after the public house of the same name) at which you turn left, into Rainham Road. Proceed up Rainham Road passing Dagenham East tube station on the left and Victoria Road is a quarter of a mile further on, on the same side of the road.

Leave the M25 at Junction 31 and take the A13 towards Central London. After approximately 4.6 miles, exit the A13 onto the slip road, signposted Dagenham/Dagenham East. At the end of the slip road at the double roundabout turn right, then going under the A13. At the T-junction turn left onto the A1306. At the second set of lights turn right onto the B178 (Ballards Road). At the end of this road you will come to a large roundabout, (known as the Bull roundabout, after the public house of the same name) at which you turn left, into Rainham Road. Proceed up Rainham Road passing Dagenham East tube station on the left and Victoria Road is a quarter of a mile further on, on the same side of the road.

There is no parking available at the ground itself. However there is plenty of street parking, some of which is available on the main Rainham road.

Take the District Line to Dagenham East (and not Dagenham Heathway). Turn left as you come out of the station and the ground is clearly sign posted and only five minutes walk away. Please note that the journey by tube from Central London can take around 45 minutes. Neil Le Milliere adds; 'The tube journey out there can be a bit of a nightmare and it's probably better to get a train from Fenchurch St to Barking Station and then a tube to Dagenham from there'. Oyster & Travelcards are valid for this journey.

* When accompanied by a full paying adult (one child per adult ticket).