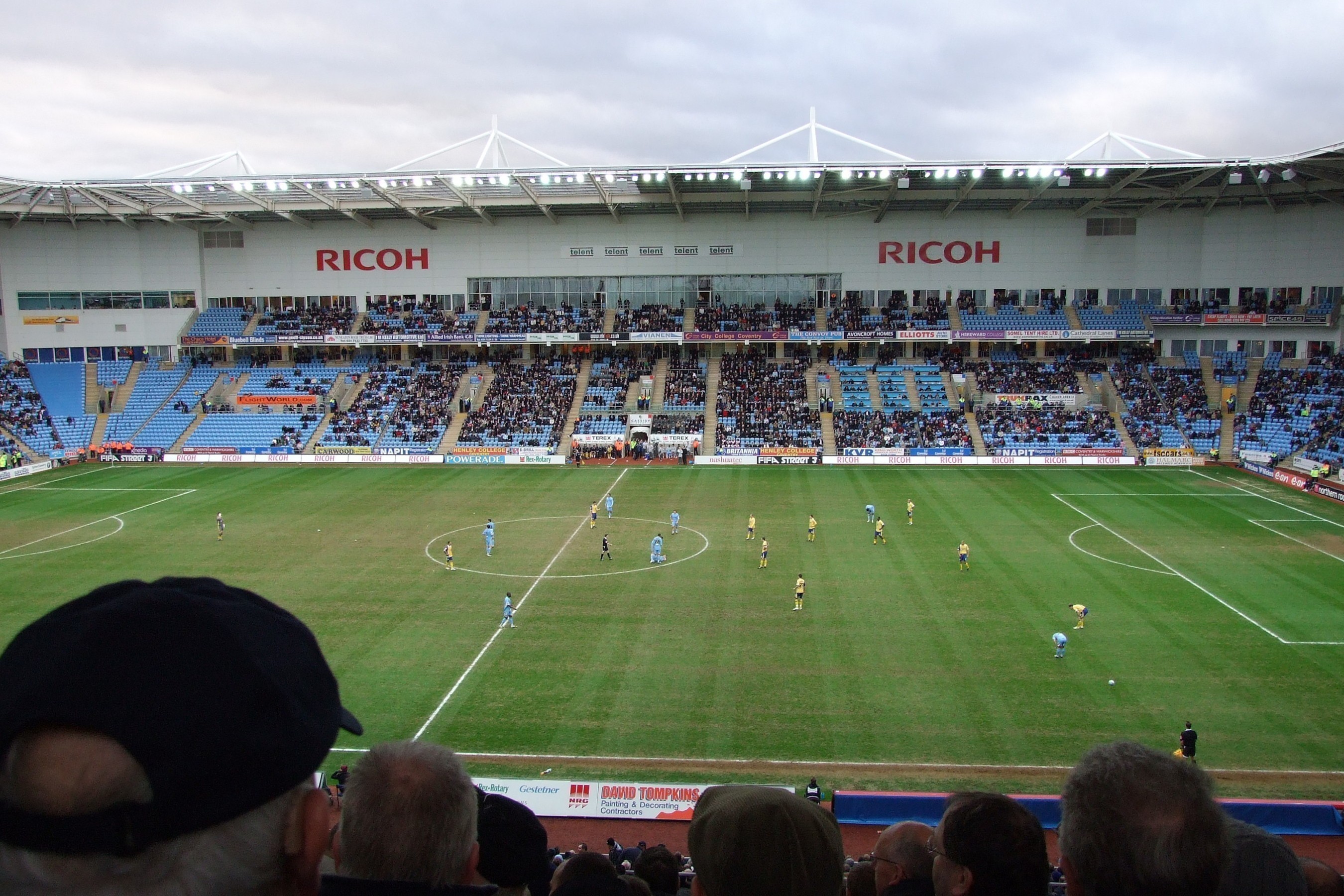 When you first arrive at the Coventry Building Society Arena, which until 2021 was known as the Ricoh Arena, you’re likely to be drawn to the fact it’s not your bog standard rectangular shape; instead you’ll find you will see it has the standard stadium look with a substantial semi-circle building attached; this is a conference centre, hotel and casino, which is currently operated by Grosvenor. Regardless of your thoughts on this, there is no denying it makes Coventry stadium one of the more striking buildings you come across. Beyond the size and shape of the stadium and adjoined building, there is huge amount of glass frontage with colours of the team – light blue – a prominent feature along with the white steel structures that form triangular shapes above the stadium roof.

Once inside the Coventry City ground you’ll find that all four stands, which are blandly named owing to the shared ownership between Coventry and the Wasps rugby team, merge into one another owing to the modern day bowl design. This ensures there are no restricted views and gives all fans a good view of the action. Seating is single tiered and steeply inclined from the field of play. This applies all around the pitch with the exception being the West Stand; here there is a small second tier specifically to allow those in VIP boxes to enjoy the outside atmosphere.

If you’re planning on grubbing up outside of the stadium then you don’t have much in the very immediate vicinity. You’ll find a Nandos and Burger King located just over a five minute walk from the ground itself; both are located near to the Tesco Extra, which is pretty hard to miss. They’re your main choice for a Saturday afternoon kick off. If, however, you’re heading to a night game you can cross the canal and check out either Nashaa (an Indian restaurant) or China Garden. Both are near one another on Longford Road with a pub, the Coach & Horses, next door to the Chinese. All of these establishments can be reached in just over 10 minutes. If you are just looking to wet your beak, Dhillons Brewery is located much closer to the stadium.

Given a rather light offering outside the ground, you might prefer to get your pre-match fill inside Coventry’s Building Society Arena. The most relaxed option is the Coffee and Bakehouse at The Mill. If you’re looking for something a little extra though you can check out the busy but brilliant Anecdote or The Mill itself, which serves booze and decent food. Other than that, you’ll be looking at your standard football grub on the concourse.

What Is the Coventry Building Society Arena Like for Away Fans?

Away supporters are usually located in the South Stand but positioned towards the west corner. As with most grounds, you’re tucked up a corner but with the modern sculpting of what was the Ricoh Arena you still have decent views of the pitch. In terms of accessing the ground, it’s straight forward from the train station whilst Car Park C is just a pedestrian bridge away. Burger King, Nandos and that large Tesco we mentioned are that much closer to that side of the stadium too.

How Do You Get to the Coventry Building Society Arena?

One of the most important things to organise your trip to the football is how to actually get there; with respect of the Coventry City stadium, this is easy. There is a train station aptly named ‘Coventry Arena’ located towards the south east corner of the ground; this is serviced by West Midlands railway with London’s Euston station under an hours ride away.

If you are planning on driving into the stadium then you’ll be pleased to know that the Coventry ground is well serviced for car parking with several thousand dedicated parking spaces. The other reason that Coventry becomes a great away day for so many is because of it’s positioning in England; as it is centrally located, it means most of the population are within easy travelling distance. As with many newly developed stadiums, its out of town positioning also mean access is straight forward. In this instance, the M1 and M40 are nearby with the M6 junction 3 just a mere 800m away.

As touched on already, for many people a visit to Coventry’s Ricoh Arena – or as it’s now officially known the Building Society Arena – is likely to be a day visit. If, however, you’re one of the 25% of the population located more than a couple of hours away you may opt to rest your head nearby and make more of your trip. You are in luck. There is a DoubleTree by Hilton at the stadium already with 121 bedrooms and as part of the development that has seen the Coventry ground become rebranded there will be another hotel added; this will again be under the Hilton umbrella but part of their Hampton range. It will add a further 150 rooms.

If staying at the stadium isn’t for you then you have a couple of alternative options. There is a Novotel located just off the M6 and, despite being situated off the main road, the stadium is walkable from here. At circa £50 per night, it will save you around £30 compared to the DoubleTree. Other than that, you’ll be looking at hotels in city centre. There are a plethora of options here but it is four miles away so you’ll need to utilise transport to get to and from the stadium.

The Building Society Arena is obviously recently renamed and revamped from an already modern base i.e. the Ricoh Arena but, for many generations, it’s not the ground that is synonymous with Coventry. Prior to the Ricoh Arena the Coventry stadium was Highfield Road; the Sky Blues played there games here for 106 years between 1899 and April 2005.

2005 saw the birth of the new Coventry stadium – the Ricoh Arena. Coventry played their home games here up until the 2019/20 season. At this point, there were legal issues between Coventry and the landlord, Wasps; it resulted in Coventry playing their games as Birmingham’s St Andrew’s stadium for two seasons.

The latest change at the Coventry stadium is the renaming from the Ricoh Arena to the Building Society; this took place in July 2021 and will remain the case for a decade. Off the back of this, Coventry City have returned to their own stadium for the 2021/22 campaign.

Coventry have a range of rivalries but the ferocity of many of these has waned over the years with clashes often few and far between. Locally, the club fiercest rivalries have traditionally been with Aston Villa and Leicester City.

Wolves, West Brom and Walsall are also considered grudge matches but to a lesser extent. A more random rivalry exists with Sunderland, who are located some 200 miles north; this dates back to 1977 when it’s believed that Coventry (and Bristol City) effectively contrived to get Sunderland relegated on the final day of the season.